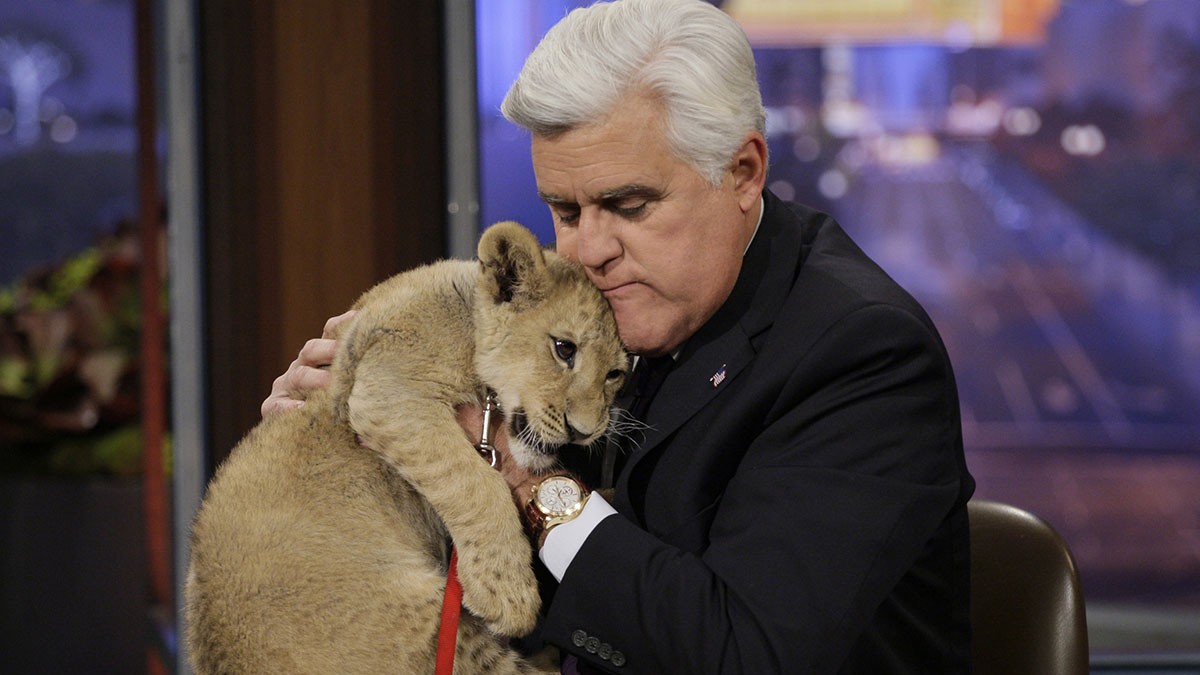 After Thursday, Jay Leno will no longer be the host of The Tonight Show.

You’re likely already aware of this, though you probably don’t care either way. Even if you regularly watch The Tonight Show, or appreciate Leno as a teller of topical jokes, his departure might not feel like a particularly momentous occasion. When Steve Kroft prefaced a recent 60 Minutes report by noting that Leno is one of the five most popular people on television, his intention was to illustrate that Leno (either by choice or network decree) is leaving his job prematurely. But in reality it showed how The Tonight Show has been diminished as an institution since Leno took over the show 22 years ago. Throughout the ’70s and ’80s, it was accepted as fact that Johnny Carson was the biggest TV star on the planet. He was more recognizable than virtually all the guests who sat in the chair adjacent to his desk. When he retired in 1992, Carson could walk into any grocery store in America and make Tom Cruise look like a checkout clerk. Leno can’t stack up against that kind of mythic, old-world star power. He barely stacks up against four other contemporary TV personalities.

A lot of that isn’t his fault. It’s just the way things are now. Guys1 like Leno are hardly seen on TV anymore. Late-night shows are experienced by most viewers the following morning via two- and three-minute bite-size pieces in people’s social media feeds. Using Nielsen ratings as a metric, The Tonight Show remains the most successful program in late night. But when was the last time you saw one of Leno’s bits retweeted into your feed? Have you ever seen one? If so, who in the hell are you following? Leno is about as viral-friendly as any doddering midsize metro daily newspaper columnist. (This explains his fascination with wacky headlines.)

Now, if you do have any discernible emotional reaction to Leno’s departure, I’m guessing that it falls somewhere between “relief” and “spite-fueled glee.” While Leno certainly has his partisans, the most passionate responses to his workmanlike comedy gruel have come from those who have long taken his very existence as an affront. Even as Leno has faded as a high-profile media figure to the point of virtual invisibility for anyone born after the Late Shift era, he remains a symbol of generational privilege for the People Who Followed the Boomers.2 Hating Jay Leno, particularly for people in their thirties and forties (old enough to actually kind of care about who hosts The Tonight Show, but young enough to still be sort of vain about appearing “hip” and “edgy”), is what makes Leno seem more important than he really is. Now that his tenure at The Tonight Show is nearly complete, it’s what Leno represents that looms largest.

Kroft rightly seized upon this as the framework for Leno’s 60 Minutes profile, but only (again) in a wrongheaded, bizarro-world sense.3 The crux of the 60 Minutes story is that Leno was “pushed aside for a younger generation,” a view Leno himself appears to support based on how the interview is edited. That assertion is absolutely correct, by the way, though the tone of the piece is clearly disapproving of these developments. It starts with a Leno sound bite about how in show business, “you are going to get screwed,” and from there pads a one-sided puff piece with a series of passive-aggressive quotes from Leno for the next 13 minutes. When Leno pays lip service to Jimmy Fallon’s qualifications, and Kroft points out the obvious about how Leno said the same about Conan O’Brien when NBC “pushed him aside” 10 years ago, Leno (too cutely) replies, “Well, we’ll see what happens.”

Unsurprisingly, media critics instantly integrated the interview into the same “Why won’t he just leave already?” narrative that was predominant during Leno’s battles with O’Brien in 2009 and ’10. Echoing the sentiments of many TV writers, Vulture’s Joe Adalian argued that Leno’s unconvincing ceding to Fallon was hurting his good name. “He should play as many stand-up dates as he wants, touring till he drops. But for the sake of his own legacy, February 6 should mark the end of his TV-talk-show career,” Adalian writes.

I would argue that “Why won’t he just leave already?” is Leno’s legacy, and that the constant drama-queening his haters blast him for is a two-way street. As a longtime Leno loather, let me cop to this: I won’t miss his show, but I will miss complaining about his show. Leno, self-consciously or not, played a great heel, and people my age relished every hiss and boo we spat at him.

Make no mistake: Any semblance of cultural resonance that The Tonight Show has is gone after Thursday. That doesn’t mean Jimmy Fallon won’t be good — I think he will be — just that his relative goodness or badness won’t have any greater meaning. It will just be another TV show. Love him or (especially) hate him, Leno was the only reason The Tonight Show mattered even the tiniest bit. My generation has been defined by its antipathy toward boomers, and Leno is the Coca-Cola of boomer culture.

In 2010, right in the middle of the media feeding frenzy over Leno’s Tonight Show “coup” against O’Brien, Patton Oswalt appeared on the Comedy Bang! Bang! podcast (back when it was Comedy Death-Ray Radio) and compared Jay Leno to Richard Nixon. Obviously, he didn’t mean it as a compliment. Comparing anyone to Nixon is like the morphine alternative to a Hitler comparison. It won’t get the accuser entangled in a potentially lethal Godwin’s law violation, but it still totally fucks up whoever is being administered the dose.

Oswalt’s reasoning was sound. Like Nixon, Leno is an all-time talent in his field and unquestionably skilled, but ultimately hampered by insecurity and an insatiable drive to assuage that insecurity with constant approval from the American public, regardless of who gets hurt in the process. Like all of Leno’s critics, Oswalt made sure to point out that Leno was once known as perhaps the most respected road comic in America. It sounds like praise, but it’s always brought up to condemn Leno. It’s like explaining how adorable a former child star used to be to illuminate how hideous the person in question became as an adult.

Sure enough, Oswalt’s most serious charge against Leno is that “he willfully shut that switch off” once he got Carson’s job. The implication is that Leno pandered to the public’s basest instincts in Nixonesque fashion (at the expense of people like David Letterman and O’Brien) to consolidate his power. 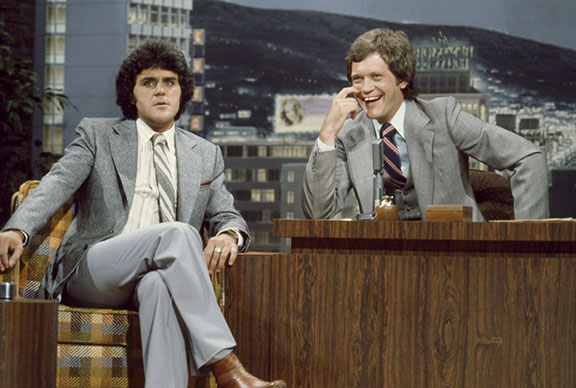 I wasn’t hanging out at comedy clubs in the ’70s and ’80s, so if people who were there say that Jay Leno was the funniest man alive back then, I’ll take their word for it. But judging by the YouTube clips I recently watched of Leno’s celebrated mid-’80s appearances on Letterman’s Late Night show, the old young Jay isn’t that dissimilar from current old Jay. Here, you can see him always pushing hard to the next joke, favoring the security of a prepared act to the uncertainty of real human interaction.4 He’s a little more natural in this clip, bantering with Dave about working as a foot soldier in the trenches of clubs in Middle America while his old Comedy Store pal Letterman sits like a general behind a GE-owned desk. But Leno still seems much older than Letterman, even though Letterman is actually three years his senior. The latter is thoroughly postmodern, surveying Leno’s hammy gesticulations and punched-up laugh lines with detached amusement. The former is the embodiment of old-time showbiz, a real hoofer, constantly reminding you of how hard he’s pounding the floorboards to get a goddamn laugh already.

Watching these old Late Night shows reminded me why I responded to Letterman so strongly as I entered my teen years in the early ’90s. Just as The Simpsons did around the same time, Letterman confirmed that you were smart and “correct” for believing that mainstream pop culture was imbecilic. A person like Letterman trained you to see through people like Leno. He made you want to be the guy who silently mocked the other guy for trying so hard to fit in.5

As annoying as Leno is in these clips, his oft-praised work ethic and dedication to his craft are impossible to miss. If you’re inclined to view Leno at all sympathetically, even the Nixon comparison isn’t all bad. In an earlier 60 Minutes piece from 1992, pegged to the start of Leno’s Tonight Show reign, his wife, Mavis, shares a painful anecdote from Leno’s days as a budding movie star in the ’80s, when a casting director rejected him before putting out a call for a “good-looking Jay Leno.” Since then, Leno’s job has been threatened by a hostile media and rivals who were either cuter (like Fallon) or more respected for their intellectual, Ivy League pedigree (like O’Brien). His only salvation has been the support of a “silent majority” resentful of the cultural changes that Leno provided a bulwark against.

Those people aren’t just going to disappear once Leno leaves, though they might as well evaporate as far as most of the media are concerned. Watching Leno’s 60 Minutes profile, I was struck by its perspective: It is maybe the only piece of reporting I’ve ever seen that was clearly done from a Conan-averse, boomer-centric point of view. Explicitly, it’s a piece about an icon (maybe) exiting pop culture; implicitly, it’s about the phasing out of a dominant media perspective. It’s not just that Leno is being pushed aside. His audience is, too.

This is the part where I’m supposed to be smug. We won! Grandpa is finally giving us the keys to his shiny media machine! The new host of The Tonight Show has rapped with Justin Timberlake and thinks Full House jokes are funny! Those generational signifiers will never grow tired among the People Who Follow Our Generation!

If I can reference a seminal event for individuals in my demographic group that occurred a quarter-century ago, the end of Leno is like the fall of communism in Russia. It’s a destabilizing event that signals larger changes that will irrevocably alter how we see the world. It might take awhile to feel the aftershocks in the media landscape, but they’re coming. Yes, there’s a TV special airing on Sunday commemorating the 50th anniversary of the Beatles performing on Ed Sullivan. But the future belongs to Nirvana retrospectives. While the original Woodstock turns 45 this summer, I suspect it will be overshadowed by remembrances of Fred Durst’s sociopathic behavior at Woodstock ’99. Moving forward, Leno will be memorialized by the very people inclined to perceive him (at best) as out of touch and (at worst) cretinous.

Everything is different now. Except it’s really not.

After all, Leno himself once signified a younger generation that “pushed aside” Carson. And then he got old. Everybody gets old. Generational wars aren’t won on the basis of better ideas or funnier jokes. They are rigged contests that favor the young 100 percent of the time. But only in the short term. Eventually, we all get thrown over a cliff. So, congratulations, my brethren. After Thursday, we’re next on the chopping block.