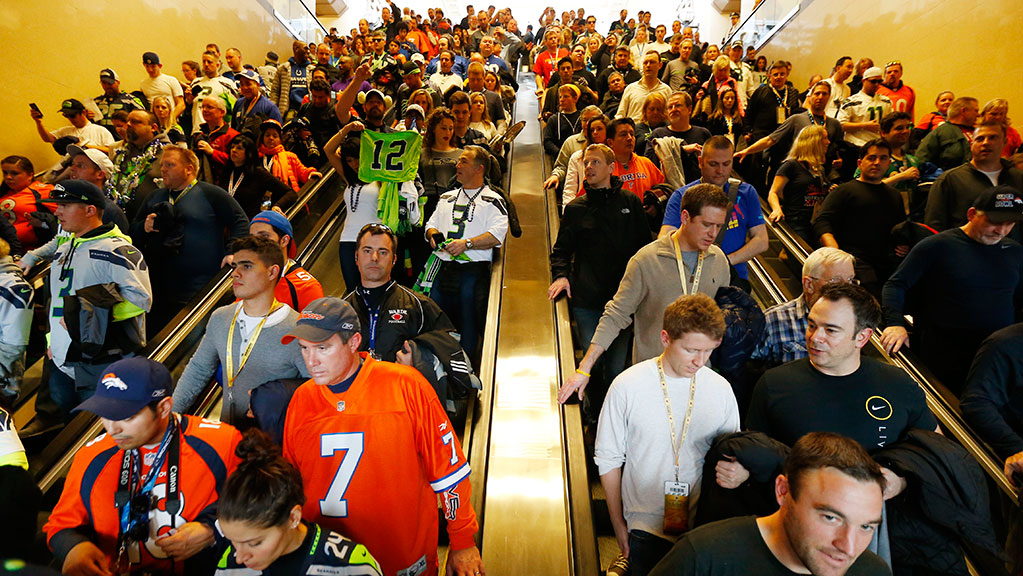 The Seattle Seahawks beat the Denver Broncos 43-8 in Super Bowl XLVIII at MetLife Stadium. It was a huge win for the Seahawks and a huge loss for fans trying to leave after the game. Nearly 28,000 people rode public transit from Secaucus Junction, and New Jersey Transit ended up bringing in an additional 50-plus buses to take fans to the Port Authority in New York. The whole process lasted until about two hours after the game, with the NJ Transit spokesman crowning it a “tremendous success” (given the large number of people serviced without incident).

For additional Super Bowl coverage, check this page throughout the day for new content from the Grantland staff.

Here are a couple interesting things we found over the weekend that we wanted to share:

Everett Cook at SB Nation wrote at length about Notre Dame goaltender Joe Rogers, who was born with one hand.

The kind people at Hulu relaunched its AdZone, and you can find all the commercials you missed from this year, along with iconic ads from the past, like the Bird vs. Jordan showdown for a Big Mac.

There are a couple of exciting NBA games you might want to check out, namely Memphis at Oklahoma City at 8 p.m. (FSOK) and the Clippers at the Nuggets at 9 p.m. (ALT). With Marc Gasol returning for the Grizzlies last month, the team is riding a season-high seven-win streak — despite Mike Conley’s absence — and hopes to win its fourth straight against the conference-leading Thunder. In Denver, we might see a Ty Lawson return after he missed the last two games, something that would help the Nuggets recover from a two-game slump. Here are the other teams playing for the night.

In college basketball, you can catch no. 2 Syracuse back at it at 7 p.m. (ESPN) against Notre Dame after suffering a huge scare from no. 17 Duke on Saturday. Both the Fighting Irish and the Orange are ACC newcomers, though they were both formerly in the Big East and were conference rivals. Another game to watch between two top-25 teams is no. 16 Iowa State against no. 8 Oklahoma State. The Cowboys will try to avoid a third straight loss, while the Cyclones seek a third win over a ranked opponent in a four-game stretch (9 p.m., ESPN). Also worth checking out: Xavier and no. 9 Villanova on FoxSports1 at 7 p.m. Here is the schedule for the rest of the games.

As for the NHL, you will definitely want to check out the Oilers-Sabres game — just kidding, joke. The real thriller tonight will be the Kings hosting the Blackhawks on NHL Network-Canada. Chicago is first in the league in goals, while Los Angeles is first in goals against, so that will be an interesting matchup. The Kings have lost eight of their last nine games and will be eager to come back, while Chicago suffered a lesser setback in a shootout loss to San Jose Saturday. The full listing can be found here.