It had to be documented. For history. For the children walking through the Pro Football Hall of Fame who ask, “How did he ever end up in Cleveland?”

I was prepared to ignore it entirely after three months of miserable news, but Johnny got me hooked early on, and before I knew it, three hours had gone by. It was too insane to change the channel or turn off the computer. So for the children’s sake, let’s all relive the night Johnny Football went to Cleveland.

I experienced this in 10 steps.

1. Was Johnny Drinking at the Draft? 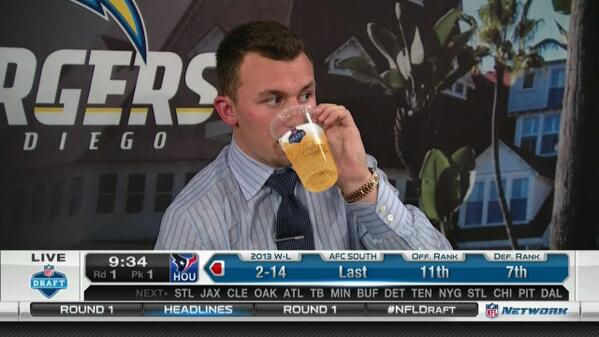 This photo surfaced early in the first round, and in that moment, I was ready to pledge lifelong loyalty to Johnny Football.

2. Johnny Wasn’t Drinking at the Draft 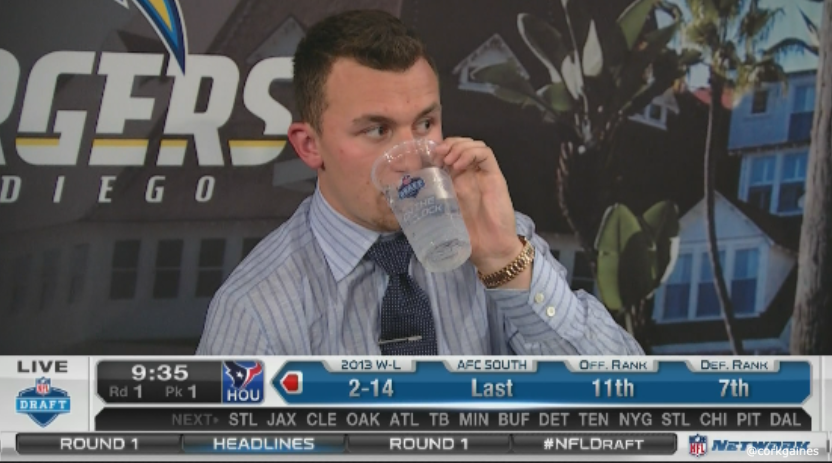 I really thought that first photo was real, which should tell you three things. First, everything on the Internet is a lie; don’t be an idiot like me. Second, given his history and general approach to life, it was at least a little bit plausible that Johnny Manziel would be the first draft prospect in history to be drunk in the green room. Third, following a draft on Twitter remains the absolute greatest. It makes the whole night so much dumber, and so much better.

Everything went according to plan with the first two picks. Then the Jaguars went and took Blake Bortles, which is the closest thing we have to an NFL version of the Cavs taking Anthony Bennett last year. It was so perfectly Jacksonville that it still doesn’t seem real 12 hours later. It’s too on the nose, right? Like the Johnny Photoshop. I’ve already been fooled once. There’s no way the Jaguars took Blake Bortles with the no. 3 pick.

Anyway, that’s where the draft went off the rails.

The Browns had been linked to Manziel since January, but after Bortles leapfrogged him, Cleveland dealt its pick to Buffalo to trade down. The Browns got a first-round pick next year, so it was great for Cleveland. But it was the beginning of a rough few hours for Johnny Manziel.

It’s draft rule no. 1: If a famous quarterback starts slipping even a little bit, that becomes the only thing anyone talks about on TV all night. With Manziel it was doubly true, because people were going to be talking about him all night anyway. Having him slide down the first round was just a bonus. It was the dream scenario for ESPN and NFL Network. As soon as he slipped past Cleveland at four, speculation took over the night.

Raiders at no. 5? Nope. Johnny Manziel could have single-handedly resurrected the Raiders as every rapper’s favorite team again, but they went with Khalil Mack. Oakland’s all set with Matt Schaub at quarterback. And this is why Ice Cube is the only rapper who still cheers for the Raiders.

Vikings at 8? Nope. They traded down with the Browns. So… Browns??

Browns at 8? NOPE. They passed on Manziel for a second time — grab a cornerback instead — and every Cleveland fan who’s fallen in love with Johnny Football now remembers how much they hate the Browns.

Vikings at 9? Nope again. Took Anthony Barr, because apparently Mike Zimmer wasn’t a huge fan of Manziel and his life outside football. Which makes a lot of sense if you’ve ever heard Mike Zimmer on the sideline. That’s not a man who has time for commercials with LeBron James. It’s nothing against him or Manziel, but pairing those two together would have ended badly.

Titans at 11? Nope. They grabbed tackle Taylor Lewan instead. They’ll stick with Jake Locker as the face of the franchise for the next few years, which is a sad sentence to say out loud.

Through all of this, there were two subplots that kept it entertaining.

First, there was watching fans lose their minds on Twitter as their favorite team passed on Manziel. It’s depressing to watch your team have a chance at someone as exciting as Manziel and then just pass and take a regular football player or trade out of the pick. Cleveland did it twice in the top 10, so the Browns fans were the clear winners in the meltdown power rankings, but Vikings fans and Titans fans were also pretty great. Watching them ride this roller coaster of emotion with each pick was just as riveting as watching the same thing happen to Johnny in the green room.

The second subplot was this:

The way this is shaping up, Dallas is going to have a choice to make at 16 on Johnny Manziel.

Would the Cowboys become the most trolltastic team in the universe? Would Jerry Jones get so excited about the potential publicity that he’d just go off and draft him for the hell of it?

Drafting Johnny Football in the 1st round after giving Tony Romo $100 million would be the most Jerry Jones move of all-time.

Everything I said about fans going nuts and then getting their hearts broken? I lived that Thursday. I already explained my Cowboy fandom here last summer; it’s a love-hate relationship that’s probably about 80 percent hate at this point. But Johnny could have changed everything. And as each pick came and went with Manziel sitting there looking more and more depressed, it became a real possibility.

Just got a text from someone who would know – "Hell, I'm hearing they might now" – about Manziel/ Cowboys. Ohhhhhhh buddy

For football fans, putting someone as unbearable as Manziel on the Cowboys just felt like destiny. Everyone was rooting for it to happen as the Cowboys pick approached. He would join forces with Jerry Jones and Dez Bryant and Tony Romo, and they would all go troll the universe together.

For Cowboys fans … Was it crazy and potentially really stupid? Of course. But screw it. Crazy and entertaining is better than smart and mediocre. The Cowboys have had the exact same season — almost literally — for like five years now.

I’ll remember the Tony Romo experience forever just for the sheer impossibility of all the various disappointments, and I don’t hate him like some fans. But we’ve seen enough. How many times can a team go 9-7 or 8-8? Romo’s 34 years old and coming off a major back injury. Why not draft Johnny Manziel, let Romo play another year or two, and then see what happens? It wouldn’t have been that crazy. It’s actually crazier that this stupid team approaches every offseason like they’re Super Bowl contenders.

It's believed Cowboys will take Calvin Pryor or Johnny Manziel. This is getting interesting.

They took Zach Martin, a tackle from Notre Dame. That was apparently a smart pick according to all the draft experts, but it’s also probably the exact character you’d create if you were trying to come up with the most boring draft pick possible.

And just like that, we all had let go of the dream … It was so real, and then it wasn’t.

Manziel on the possibility of being drafted by the Cowboys: "I don't know if the world could've handled that, honestly."

After the Cowboys passed on him, I felt like Johnny looks in that photo. This was around the time it became open season for Manziel jokes from all corners of the Internet. Some Caribbean vacation company offered a vacation. The Photoshopped beer became a Photoshopped bottle of whiskey. DiGiorno pizza was making jokes. Even the NFL got in on it.

The night was not going well.

Not the Chiefs. They were the next team with a quarterback need, and the idea of Manziel playing for Andy Reid sounded pretty great for a second there. He could learn under Alex Smith for a year, and then take over a quarterback-friendly offense that actually has a decent number of weapons.

You could probably talk yourself into Johnny Football being fun on 90 percent of the teams in the NFL. That’s how we all stayed busy Thursday. Jon Gruden was doing that exact thing all night long on ESPN. Nobody in the world loves Manziel more than Gruden, and he was completely shameless about shilling for Johnny throughout the first round.

When the Chiefs’ pick was approaching, Gruden made the case for Manziel just like always. Mel Kiper hated the idea, but Gruden didn’t care, and it eventually ended in dead silence, and this scene: 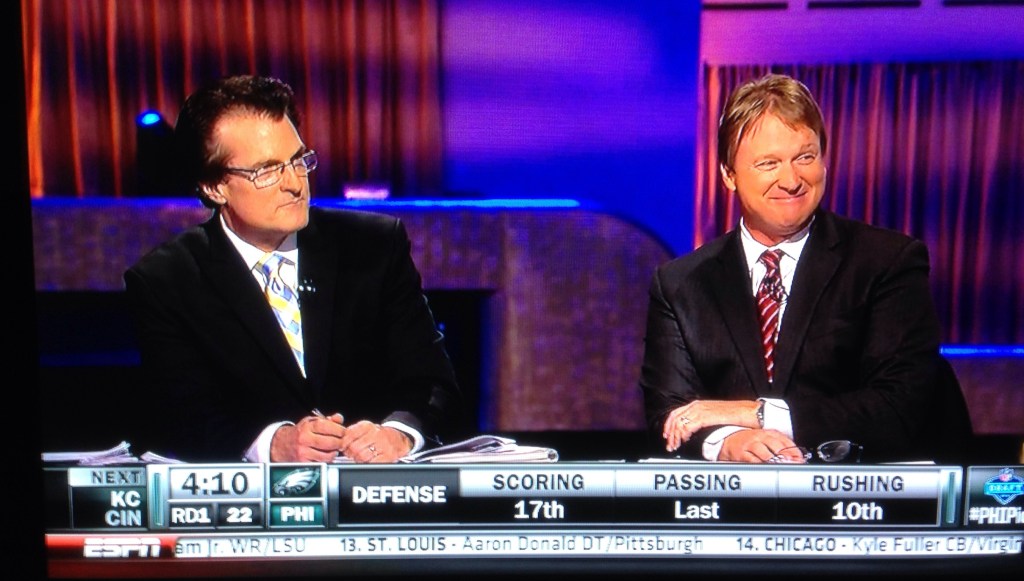 Jon Gruden won me over for life on Thursday.

This was the dream all along, and it was right there. We could spend weeks imagining the terror that would come with Johnny Manziel, LeSean McCoy, and Chip Kelly all in one place. History will always ask what might have been … They could’ve drafted De’Anthony Thomas in the third round, maybe trade up for Marqise Lee tomorrow? Who knows. It would’ve been amazing. Chris Ryan would have moved back to Philadelphia. But nope. Chip didn’t do it.

And even after two hours of embarrassment, Manziel still found the strength to go out there and do that stupid money sign with his hands. It was inspiring. 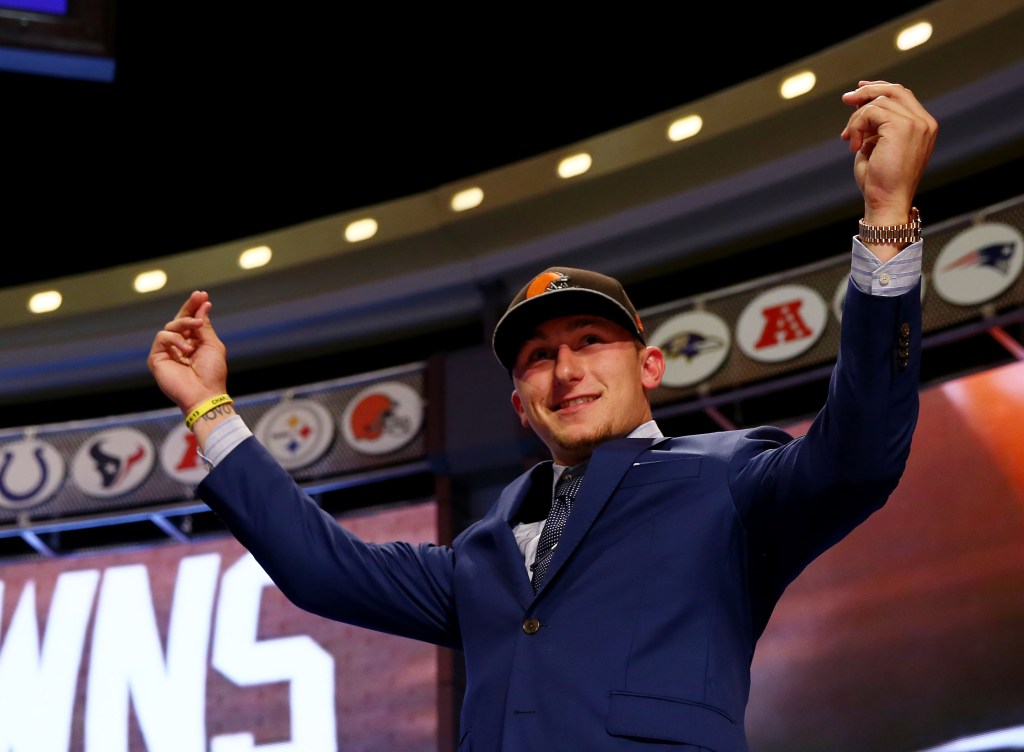 Speaking of money … Manziel lost out on millions sliding from the top 10 to 22, but he’ll also make more in endorsements than anyone else in the draft, so it’ll even out just fine. As it stands, he wound up with a great receiver in Josh Gordon, a potentially great tight end in Jordan Cameron, and a new head coach who did a killer job coordinating defenses in Buffalo and New York.

He’ll also be paired with Kyle Shanahan as his offensive coordinator, which is either great or terrible depending on which of the last two Redskins seasons you remember. All told, it’d be tough to ask for a much better situation. The fans already love him. They even have Brian Hoyer, a QB who’s good enough to start while Manziel sits, but probably not good enough that anyone will mind once Manziel takes over.

This was our happy ending. As Manziel said afterward, “I really, truly believe Cleveland was where I was supposed to end up. … Dawg Pound here we come.” The crowd in New York was going crazy when Goodell announced the pick, so Gruden had to yell over them to say, “THIS IS BETTER THAN THE MOVIE DRAFT DAY, I’M TELLING YA.”

Johnny Manziel is great because (a) he’s insanely fun to watch play football, (b) he is a ridiculous human who refuses to tone it down under any circumstances, and (c) wherever he goes, a cloud of batshit insanity follows.

He’s like Evil Tebow, which it turns out is actually pretty excellent. Everything he does on and off the field either makes you love him or makes him an amazing villain. Or eventually you come to love him for being such an amazing villain. I’m somewhere between the first and third option, I think. Manziel’s gotten more likable over the past year, so it’s probably closer to the first category.

But even if you hate him, you can’t deny that having him in the NFL will make all of this more fun. That draft was proof.

When it was over, we found out that the Browns commissioned $100,000 worth of analysis of this year’s quarterback class. Analysis that ultimately said they should take Teddy Bridgewater. But they took Manziel, because …

The Browns took Manziel because they liked him all along, and he’s a great quarterback, and for probably lots of other good, legitimate reasons. But at the end of all this, ESPN’s Sal Paolantonio reported that Browns owner Jimmy Haslam was walking through the streets of Cleveland when a homeless man recognized him, looked up, and said, “Draft Manziel.”

This report was either:

A. Proof that the whole night had been a hallucination.
B. Another chapter in the Johnny Football legend that has seemed far-fetched and ridiculous for a solid two years now.
C. SO CLEVELAND BROWNS

Maybe it’s all three. But it was the perfect way to end everything. Now?