Last spring, after the NFL draft, we lovingly curated a top 10 list of incoming rookies to watch, for reasons that reached beyond their 40 times. (Or, in Odell Beckham’s case, because he’s a highlight reel rendered in flesh.) 2014 honoree Jimmy Garoppolo’s future appears as sunny as New England is not; De’Anthony Thomas continues to delight online. Which fresh draftees will wrap themselves in your heartstrings next? We’re here to help you find out, and this year we’re starting the process early, the better to assist you in latching on to a maybe not-entirely-obvious new favorite player.

Our purview with any given class begins with signing day and ends with the conclusion of postseason play, and as sad as we are saying good-bye to batches of draftees each spring, our hearts are gladdened knowing they’re off to new hordes of screaming fans and piles of money.1 We hereby bequeath these players, their highlight tapes, and their media breakout moments to you for your tender cherishing. Our 2015 top 10, in descending order of sure-to-be-enjoyedness:

1. Chris Conley, WR, Georgia. It took a minute while watching Chris Conley streak 25 yards for a score at the 2013 Georgia-LSU game before we remembered the previous season’s Capital One Bowl, where his stat line consisted of two receptions for 136 yards and two scores. He hasn’t left our radar since. Conley mowed through this year’s NFL combine, is free with his time in public, and, right, there’s the small matter of him once having made a Star Wars fan film with a cameo from his head coach.

You have your new favorite rookie. Wasn’t that easy? Don’t say we never did nothin’ for you. 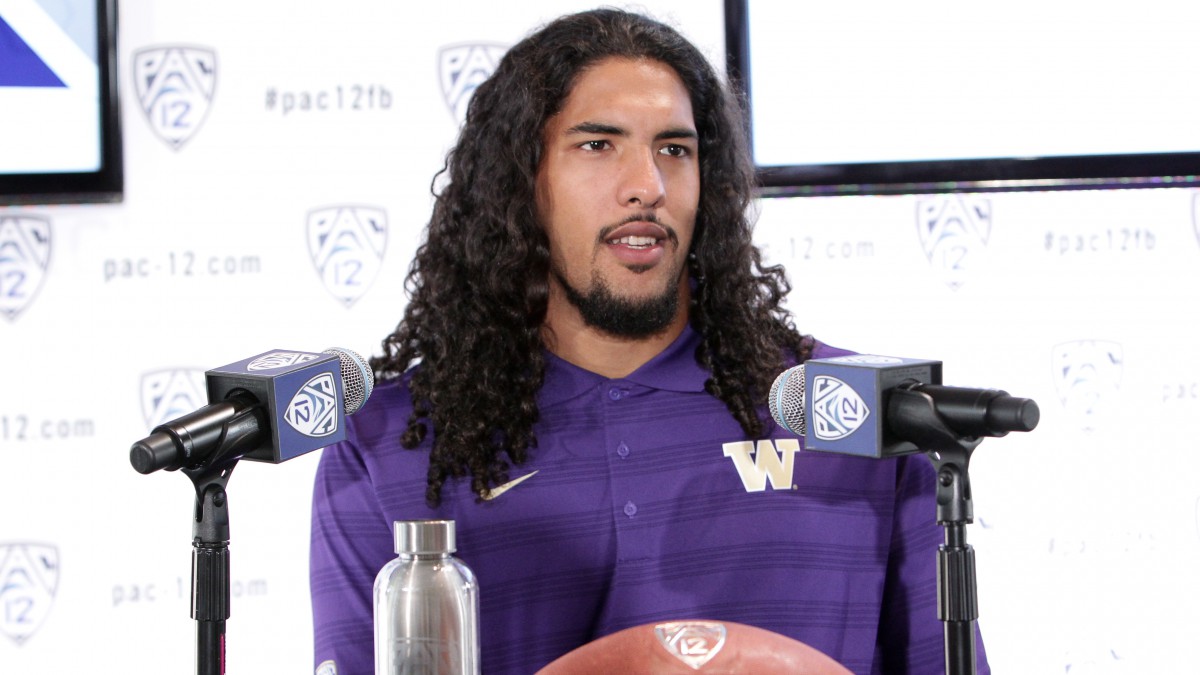 2. Hau’oli Kikaha, OLB, Washington. Are you the kind of person who just thrills to being first at anything? Does it warm the cockles of the pitted, empty space where your heart should be to proclaim that you were into this band or that slam poet back in their analog days? If you will derive outsize emotional satisfaction from crowing that you knew a guy was gonna be a huge hit in the pros way back then, Kikaha’s is the bandwagon you want to be on right now. He was a unanimous All-American in his final year at Washington, was a finalist for just about every major award, and has a resplendent head of hair.

3. Amari Cooper, WR, Alabama. This one’s a pure highlight-reel pick, and with seven triple-digit receiving games last season, including three 200-yard games, you can kind of just point anywhere on the fall calendar and pick one blind. Here, try the Iron Bowl:

Talking point for fancy parties: the unforgivably long time it took for Cooper to work his way into serious Heisman conversations. He’d eventually end up placing third, behind Marcus Mariota and Melvin Gordon.

4. Kaelin Clay, WR/KR, Utah. He became an Internet sensation in just about the most painful way possible, in one of those moments when it becomes crushingly apparent that (a) there are unseen forces governing the ebbs and flows on a football field, and (b) for some reason, those forces are mad at you right now:

Clay, to his immense credit, has displayed a repeated willingness to be in on the joke since that game, most notably when Oregon’s Byron Marshall very nearly did the same thing in the national title game:

And seriously, isn’t this episode almost a selling point in his favor now? Can you imagine a player more conscious of ball security than this guy at this point? He is NEVER gonna do that again.

5. Melvin Gordon, RB, Wisconsin. It takes some doing to stand out as a successor to Badgers like Montee Ball and James White. We profiled Gordon in what would end up being his final home game in Madison, just a couple of weeks after he ran the height of the Empire State Building against Nebraska, which is only our second-favorite fact about that game. Here’s the first:

Undersize and under-recruited in high school, Gordon told us he’d like to have pursued a career path as an architect in another life. Instead, he’s a wrecking ball. Downright poetic, isn’t it?

6. Connor Halliday, QB, Washington State. Listen. You want to talk heart, grit, and guts? You’re an NFL fan; of course you do. This is the kid who lost the game in which he broke the FBS passing record, whose senior season ended on a broken leg. He hadn’t recovered enough to perform with his peers at the combine, but if you live and die with the guys who Just Don’t Know The Word Quit, who embody every coachspeaking chestnut on the clipboard, you have found your show pony. It’s like if the mouse in An American Tail had nine million passing yards.

7. Ifo Ekpre-Olomu, CB, Oregon and Erick Dargan, SS, Oregon. More highlight-reel picks, literally: These two perpetrated a pair of our favorite interceptions of the year in Eugene against Michigan State, picks that held their spot from Week 2 onward. Here’s Dargan intercepting Connor Cook with a midair pirouette we’ve been calling the Toe Pick:

And here’s Ekpre-Olomu, laying out horizontally in midair late in the game for a belly-flop (or Pamchenko twist!) turnover:

8. Karlos Williams, RB, Florida State. This is a sentimental selection. Because sometimes you need poetry in your life, and sometimes the universe accordingly provides you with a player whose name sorta sounds like a famous poet, only it’s a poet you have never liked and you find yourself able to improve on his dumb works:

9. Bryce Petty, QB, Baylor. The penultimate slot goes to the long, long, longtime Bear who knows his way around a graceful discussion of matters beyond his control:

Bryce Petty on playoff: "That question is really above my pay grade. All I'm not paid to do is play."

Petty is also the second FBS player (after Jordan Lynch)2 to tell us that Adele makes appearances on his pregame playlists, an approach we’re surprised more quarterbacks don’t publicly favor. Gotta hit the field with a clear, soothed mind to hit those downfield targets.

Lynch, in 2013: “I remember when I used to go out there for games all jacked up, trying to run over and hit somebody. But I play quarterback. I need to be mellow, and I need to be in control.”

10. Kevin White, WR, West Virginia. We’re running out of room all the way down here; White edges out Georgia QB Hutson Mason (with his graceful acceptance of his own speed, he’s exceptionally relatable) and Kentucky DE Bud Dupree (an excellent pass-rusher who is also named “Bud Dupree,” which makes him sound like a player on a leather-helmet team and we like that). It is a STACKED class of receivers this year, both out in the real world and on our imaginary board, but neither kind of discussion can be had without including White, star of the cruelest callback of a score all year:

We’re never, ever going to shut up about this play, so when you get thrown out of the party for not shutting up about it either, come find us on the smoking terrace. Bring a bottle.