What’s going on in the NBA right now? Glad you asked.

Draft week is here, which means NBA news is better than ever. Especially this year. Embiid’s injury turned everything upside down in the draft itself, Carmelo and Kevin Love are (maybe) on the move, and there’s even an outside chance LeBron will leave Miami in two weeks.

Anything is possible right now, which means we get twice as many rumors as usual. The Internet will be awash in bullshit for the next few days, so if you’re looking for actual news, probably just wait till Friday. But if you’re looking for baseless speculation and half-baked rumors? Let’s do this! Here’s a look at the stories we’ve got at the start of the week.

Carmelo Anthony shocked no one when he opted out this weekend, but it’s a little surprising how quickly the Bulls have become the default team everyone expects to land him this summer. Rather than making a run at Kevin Love, Chicago is apparently planning on Carmelo, who coincidentally has the same agent as Tom Thibodeau. Everything’s lining up here to make the Bulls the biggest contenders to the Heat’s throne in the East next year. But there’s a twist.

From the New York Daily News:

[Joakim] Noah will be disappointed if it turns out that Anthony uses the Bulls merely to get [James] Dolan to up the Knicks’ offer. But one of his teammates won’t be crushed. Derrick Rose hasn’t called Anthony once and isn’t expected to do any recruiting when the Bulls make their run at the Knicks’ top scorer in free agency.

According to sources close to Kevin Love, Rose’s preference is for the Bulls to work out a deal as soon as possible for Minnesota’s All-Star forward because he sees Love as more of a team player than Anthony.

There are two sides to this.

On the one hand, we’ve been here before. Back in 2010 when the Bulls were recruiting LeBron, Derrick Rose apparently refused to call and help recruit him. Then he said they did talk. Then he said he wouldn’t recruit any free agents. So who knows? Back in 2010, we thought ignoring LeBron was awesome. Rose wasn’t going to be part of any Illuminati superteams; he wanted to win it the old-fashioned way. Now? That attitude seems pretty shortsighted. If not with LeBron, then definitely with Carmelo. The Bulls would have to give up all kinds of assets to land Kevin Love, whereas they could sign Carmelo outright and come back with a team that would be an instant contender in the East. Pick up the phone, Derrick Rose.

On the other hand … If you read that excerpt closely, it looks like the “sources” here are from Kevin Love’s camp. Another way of writing that rumor would be, “Kevin Love’s people say Derrick Rose thinks Kevin Love is better than Carmelo.”

So maybe take all this with a grain of salt.

It’s completely plausible that Rose would give Carmelo the cold shoulder, but we should probably wait until at least December before we start driving a wedge between them. Plus, have you ever heard a Rose press conference? Recruiting calls from Derrick Rose could make for some of the most uncomfortable conversations ever.

Where Is Klay Thompson Going?

Apparently trade talks have cooled down between the Wolves and Warriors over the past few days. Depending on where you look, either the Wolves want more than Klay and David Lee, or the Warriors won’t give up Klay:

Source: No way GState trading Klay Thompson to Minnesota or the Lakers.

Serious game of chicken: source says no way GState getting KLove w/out giving up Klay Thompson. DLee & HBarnes not enough. Who blinks 1st?

Just for the record, it’s getting tougher and tougher to see which side looks worse here: the Warriors for refusing to part with Klay, or the Wolves for convincing themselves that Klay Thompson, Harrison Barnes, and two years of overpriced David Lee ($31 million) are enough to make this deal worth it.

If the Warriors are serious about keeping Klay, they win the idiot sweepstakes. Klay Thompson’s just good enough to command huge money in free agency next year, meaning they’d have to commit to building their team around Klay and Steph Curry long-term. Even if Kevin Love doesn’t automatically make them contenders next year, building around Curry and Love for the next few years looks MUCH better. So much better. It doesn’t matter if they give up good players like Harrison Barnes to do it, or if they have to take back Kevin Martin.

They’d be getting rid of Klay and David Lee, two players who are good enough to command playing time and big money and touches on offense, but limited enough to keep Golden State from ever hitting the next level. In return, they pair Steph Curry with one of the 10 best players in basketball for the next five years. This shouldn’t be that complicated.

If the Wolves are serious about building a Love trade around a 2-guard who will be lucky to match Joe Johnson’s production for the next 10 years … well, they definitely win the idiot sweepstakes. In fact, the Warriors are probably playing coy with Klay to try to drive up his value over the next week. The more Golden State management acts like it doesn’t want to give him up, the more it’ll feel like a coup for the Wolves if they can finally wrestle him away. That’s gotta be what’s happening here, right? And it’s gonna end with one of the most one-sided trades of this century? The Wolves are dominating the summer so far.

Sad day. For weeks now, Danny Chau has gradually broken me down and gotten me all excited about Saric sliding into the NBA and becoming one of the biggest steals of this draft.

Now it’s all over.

Breaking: Dario Saric has agreed in principle to a three year deal with Anadolu Efes a source close to Saric told http://t.co/KQ6fwudeVT.

The deal will essentially prohibit Saric from playing in the NBA for a minimum of two years the source told ESPN.

Saric's draft stock will likely take a small hit. He was projected at No. 12 in last mock. Will fall to 17 to Celtics in our newest one.

At least for the next year or two, we’ll all have to wait.

Saric is still draft-eligible this year, which means he’ll land somewhere in the top 20, but knowing he’s not coming over for a year or two makes it a lot harder to get excited. People hate online shopping for this same reason. When you buy something, you want it NOW, not in three to five business days.

Parker came in to work out on Friday in front of the Cavs’ front office and ownership. Parker wasn’t great. He was a bit heavy (he weighed in at 255 pounds), didn’t shoot the ball well and got winded at times. Furthermore, two different sources told ESPN.com that Parker seemed a bit indifferent. One source said he thought Parker “tanked” the workout.

Why? A source says he strongly prefers to play in Milwaukee. The Cavs appear to be aware of this. “Jabari wasn’t himself,” one source said. “It was clear we weren’t his first option.”

Doesn’t even matter whether this is true, I just love that there are questions about whether one of the best players in the draft is tanking workouts to avoid going no. 1 to Cleveland. Draft is week is great.

Doesn’t even matter whether this means anything. 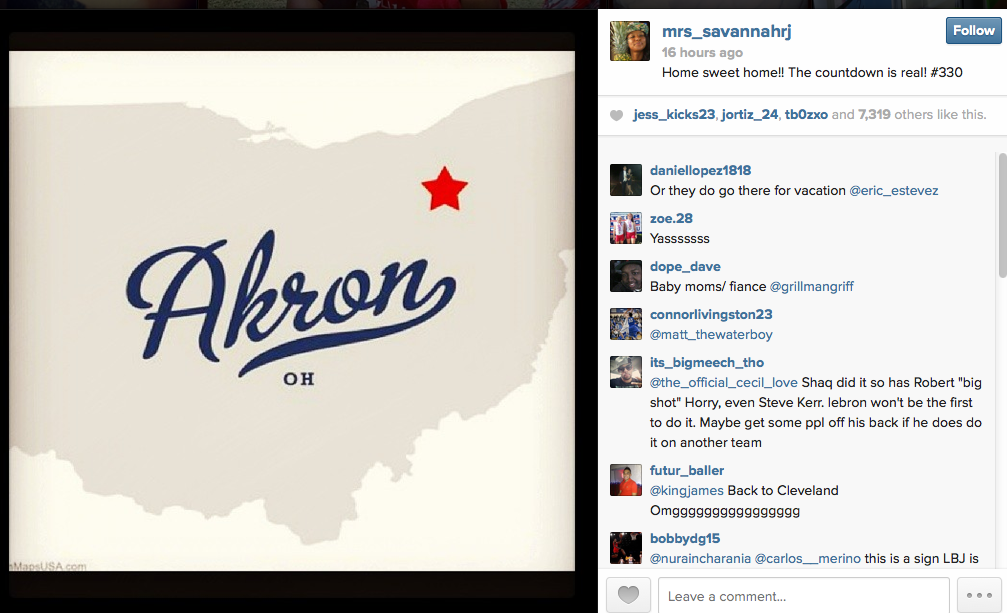 I just love that LeBron’s wife’s Instagram is getting discussed on SportsCenter and spawning articles like “4 Takeaways From LeBron James’ Wife’s Instagram About Ohio.” Draft week is GREAT.

From the New York Times:

Raymond Felton has reached a plea bargain with prosecutors that allows him to avoid jail, agreeing to plead guilty to a felony gun possession charge in return for a $5,000 fine and 500 hours of community service.

Good news for the Knicks? Maybe? Five hundred hours of community service is a good opportunity for him to shed some weight. Then again, so is prison, so maybe it’s a wash. Go Knicks.

The Knicks Want a First-Round Pick

In other news from New York …

Re: @ESPNSteinLine report of NYK exploring Shump for 1st-round pick: Watch the Heat, potentially using No. 26 as main bait for Shumpert.

This seems like a good move for both sides. Knicks fans have always maintained an irrational crush on Iman Shumpert, but if Carmelo’s leaving this summer, clinging to role players makes no sense. It’s much better to grab a mid-20s first-rounder and take a chance on a guy like P.J. Hairston or Glenn Robinson III, the sort of players who have a decent amount of potential but got pushed down the board thanks to this loaded draft.

For Miami or OKC, it gives them a young athlete who can help right away, as opposed to rolling the dice hoping that a rookie can come in and help them contend next year. Pretty much a no-brainer.

From Sean Deveney at Sporting News:

Chicago has had multiple talks with Orlando, both about the No. 12 pick and shooting guard Arron Afflalo, and with Denver about No. 11, but a source told Sporting News that the Bulls have also engaged with the Kings in a potential deal for the No. 8 pick. Chicago’s focus in such a scenario would be Creighton star Doug McDermott …

But I don’t know. With all due respect to McBuckets, it seems pretty crazy that they’d trade two first-round picks in the deepest draft we’ve seen in 10 years. Maybe that’s what Kevin Love’s people say Derrick Rose wants.

The Wizards traded their first-round pick for Marcin Gortat last year. For the record, I have no regrets. 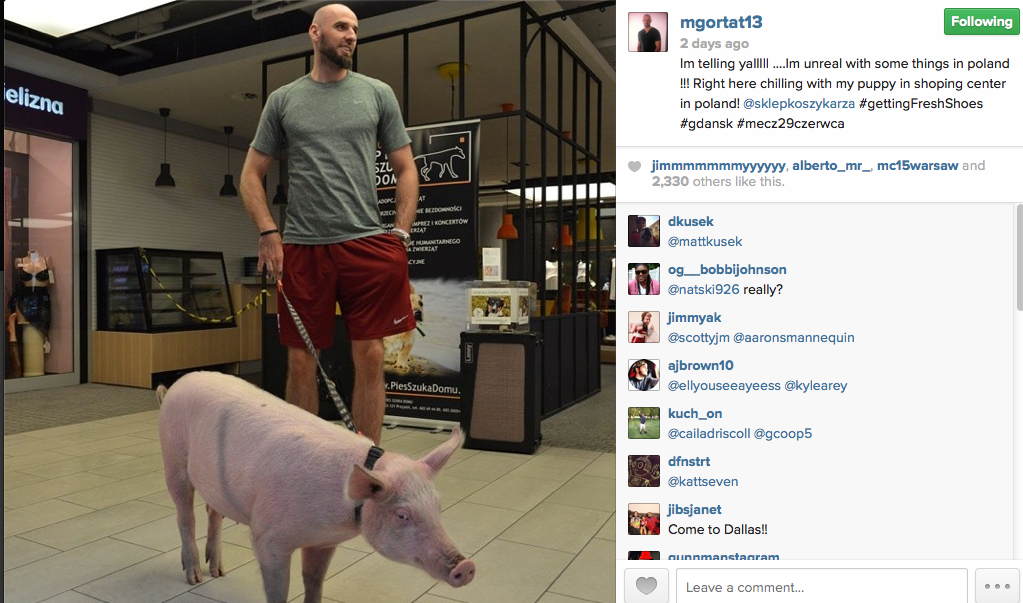