Earlier this week, in a hotel ballroom in San Francisco, possibly because both Appomattox Court House and the deck of the battleship Missouri were booked for the holiday weekend, Robert Kraft, the owner of the New England Patriots, simultaneously surrendered to the National Football League, common sense, and inevitability. By accepting the institutional penalties levied on his team by league commissioner Roger Goodell, whose feet have not touched the bottom of the pool since the World’s Dumbest Scandal first broke, Kraft grumblingly admitted some vague form of guilt for the purpose of keeping faith with his only true constituency — the dozens of extremely rich humans who own football teams. The way you know that this occurred is that Kraft capitulated even though the NFL’s own official report absolved the Patriots from any institutional blame. Kraft won himself and his team an acquittal and only then (one suspects) entered into a plea bargain. It’s all backward, unless Kraft’s true motivation was to maintain the power and influence he has built up within the structure of the league itself.

In New England, the reaction to Kraft’s surrender brought an even sharper edge to the comedy that has been essential to this whole episode right from the jump. In a number of Internet forums, Patriots loyalists have denounced Kraft as 20 pounds of sellout in a 10-pound bag. Many of the complaints are touchingly naive; these come from the people who bought the whole notion that Kraft was the one NFL owner who operated his team as a public trust, and not a vehicle through which he could make himself — and his fellow owners — wealthier. Many of the complaints are brimming with frothing outrage; these come from the people who claim that their stalwart defense of the Patriots online, or against the guy in the Colts shirt on the next barstool, has gone criminally unrewarded and now has been betrayed at the very highest levels. (These include the people who went to New York and got themselves busted at NFL headquarters while protesting the penalties.) I make it no worse than even money that Kraft gets booed at home whenever they raise the Super Bowl banner next fall.

Which would be a shame, because what Kraft did was wholly in the long-term interest of his franchise. Once the fanatics in the fan base realize that it is in their interest to have Kraft remain an influential insider, rather than turn late in life into a 21st-century Al Davis, the better off everyone will be. There was an argument made quite seriously in some quarters that, since the league is “out to get” the Patriots anyway, the team should embrace a heel role, the way the Raiders did before Davis steered that franchise into the absurdity and futility from which it may never emerge. Is sticking it to Goodell really worth paying that kind of price? Kraft apparently made the quite logical calculation that it would not be.

However, in doing so, Kraft does leave himself open to one serious charge that could cloud the team’s future considerably. At the moment, the only person still fighting the NFL’s sanctions is Tom Brady, who has taken his case to the NFL Players Association, as is his right. The four-game suspension that Goodell dropped on Brady is still the most disproportionate element of the whole affair, and the one that most clearly demonstrates that the commissioner remains over his head in his job. There is some informed speculation that a reduction in Brady’s penalty was part of the terms of surrender to which Kraft agreed. This would be the most logical resolution to the whole business, which is probably why it also is something that Goodell thus far has denied. (Goodell seems hell-bent on asserting the Eric Cartman prerogatives of his office, asserting that Brady has not respected Goodell’s authoritah as regards cooperating with the league in its investigation.) For the moment, then, Kraft has left Brady out on an island, alone, as the only alleged miscreant who hasn’t yet atoned for whatever happened in the first half of a 45-7 football game and, as the only person still fighting the NFL over it, the focal point for the ginned-up national outrage about “cheating.” The possibility still exists that Kraft and the team sold out the franchise’s greatest player — and, undeniably, its greatest asset — for the purpose of getting right with Goodell and the rest of the owners. Maybe Brady should go to New York and chain himself to a desk or something. 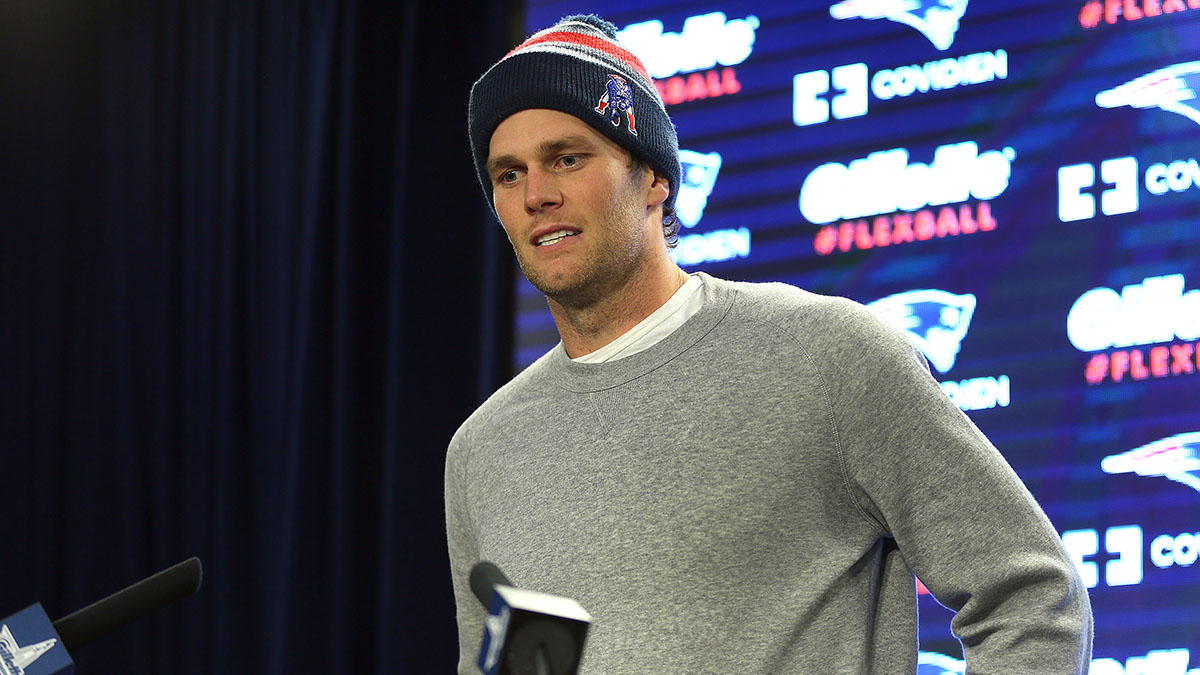 Right from the moment the silliness started, Brady and his team have seemed curiously at odds, their interests at loggerheads on some deeper level. At the initial press conference in January, after apparently studying up on the combined gas law in his spare time, Bill Belichick dropped the onus of the actual alleged shenanigans right into Brady’s lap. In retrospect, that could appear to account for the very odd aspect that Brady presented on the podium later that day. Pretty clearly, if there was some strategy being developed by the Patriots at that point, Belichick, representing the team, and Brady, representing himself, had received different memos.

For a while thereafter, however, the team and its quarterback seemed to have been on the same wavelength. Kraft defiantly demanded an apology from the league. Belichick went shell-mouthed, leaving thermodynamics once again to the experts. Brady won another Super Bowl with a performance for the ages. Even when Goodell first handed down his penalties, everyone involved on the Patriots side of things was singing from the same hymnal of offended innocence. But, clearly, beneath all the declarations of outraged solidarity, the schism apparent at the January press conference still existed. Agendas were at cross-purposes. Influences were in conflict. Faith was being kept with different constituencies by different people. We saw the results this week. Again, unless the outlines of a sub rosa arrangement become plain prior to Goodell’s personally hearing Brady’s appeal of Goodell’s own sanctions — “Kafka? Mr. F. Kafka? White courtesy phone, please” — Brady has been left out there in the wind to twist. He has been positioned by his own team as the last unpunished “cheater.” And even if there is a deal in place, what happened to Brady this week is unconscionable.

Were I as bullgoose paranoid about the Patriots as some Patriots fans apparently are about the NFL, I might wonder if this maneuver were nothing less than the opening days of the post-Brady era in Foxborough. He is 37 years old, and a cheaper option is waiting in the wings. This is a demonstrably unsentimental franchise, willing to cut ties even with valued and beloved players before those players go too far down the other side of the hill. One might think that Brady would be immune to this kind of thing. But one also wonders if the team’s virtual abandonment of him this week is a muted shot across his bow. This will become an infinitely more interesting question should Jimmy Garoppolo play well in Brady’s absence this season. After all, there was an active discussion of whether Brady was at the end of the road at the beginning of last season, when New England started 2-2. It grew conspicuously louder when Brady was lifted in favor of Garoppolo during a catastrophic 41-14 loss to the Kansas City Chiefs in the fourth game.

I would reiterate here that I believe there was some jiggery-pokery done to the footballs used in the first half of the AFC Championship mismatch, and that it beggars belief that the quarterback didn’t know anything about it. I also would reiterate here that the whole fiasco has been such a self-evident waste of time, and money, and media attention that it’s hard to believe Donald Trump doesn’t have a hand in it somewhere. This is something that should have been laughed off the airwaves 15 minutes after the story broke. It was gamesmanship, pure and simple, worthy of a $25,000 fine and a stern letter of reprimand.

Instead, the whole situation has spiraled into a grotesque piece of paranoid performance art in which puffed-up morality collides headlong with institutional arrogance and disciplinary slapstick. At this point, so many people have invested so much in the performance that it may run longer than Cats did on Broadway. Regardless of whether a deal has been struck, we will have the Brady hearing, and then another ruling from Goodell, which is always good for a laugh. Then there will be whatever Brady and his people have decided to do next — lawsuit? Pistols at dawn? — and the NFL’s inevitable response. Then it will be time for what promises to be a circus of a training camp followed by an opening-night game against the Steelers that could devolve into an extended exercise in civil disobedience. And, at the moment, the only person who is out there fighting is Brady. This week, by accepting the league’s punishment, Robert Kraft lined up with his fellow owners against his own quarterback as surely as the Steelers will line up against the Patriots in September. He made Tom Brady into the Last Cheater. It is possible that this will not end well at all.