Earlier this week, a long-rumored transfer finally reached completion, as one of the best young players in the English Premier League ended the impasse with his former club and forced his way to a top-four team. And really, who could blame him? For the past couple of seasons, due to his relative youth and inexperience at the top level, he’d been making a weekly salary of less than £40,000 — well below market value. Rather than accepting a significant raise, he refused to extend his contract in order to pressure his then-current team into selling him to a bigger club. With the clock ticking on a contract that had only two years left to run, an agreement came about … and Morgan Schneiderlin officially moved to Manchester United.

In other transfer news, Raheem Sterling moved from Liverpool to Manchester City.

Realistically, nobody’s actually looking at those two transfers that way. At least, not right now. Sterling’s move was the noisy one, while Schneiderlin’s was the quiet, foregone conclusion. Really, though, beyond the positions they play, Schneiderlin, a defensive midfielder, and Sterling, an attacker, aren’t all that different. They’re two extremely talented players who forced extremely lucrative moves from clubs in the Europa League to ones in the Champions League. And both of their resulting transfers represented where in the current hierarchy their former teams stand. For Southampton, Schneiderlin’s move just reinforced what everybody knew anyway: They can’t afford to keep their top talent. While that might be equally true at Liverpool, it wasn’t always that way. And it’s a heck of a lot easier to blame Raheem Sterling than it is to confront what his sale confirms about the team’s place in the world.

A year ago, after watching Southampton sell Luke Shaw, Dejan Lovren, Calum Chambers, Adam Lallana, and Rickie Lambert, Schneiderlin decided that he wanted out, too. Southampton and new manager Ronald Koeman — that’s right, their manager also left that summer — said “no.” And so Schneiderlin flexed his leverage muscles, sat out preseason matches, and posted woebegone stuff like this on Twitter:

Southampton held firm: They threatened to fine him if he missed games, but welcomed him back with open arms when he eventually showed up to work. At some point, there briefly was talk of a contract extension that would double his wages to £60,000 per week, though that went nowhere fast. By season’s end, Schneiderlin was still set on leaving and a decision had to be made.1 This time around, Southampton granted his wish, selling him to Manchester United for £24 million. His new salary: £150,000 a week.

When there’s two years left on a player’s deal, clubs often have to make a decision about the future: extend or sell. If you wait until there’s one year left on a deal, that player’s transfer value will plummet, as all other clubs know they can now just wait another year until he’s out of contract.

For Sterling, it all happened so fast. By the end of March, negotiations over a contract extension had broken down. Sterling reportedly asked for £150,000 — up from £35,000 — but Liverpool wouldn’t budge beyond £100,000, and the two sides ultimately never got closer than that. Over the ensuing months, Sterling’s camp became increasingly strident in the press, and Liverpool publicly maintained they were uninterested in either selling him for less than a king’s ransom or negotiating over his contract demands. The club’s owners, Fenway Sports Group, even went so far as to claim they’d be perfectly happy letting Sterling hang out in the reserves if they didn’t get their sky-high £50 million price tag. Eventually, though, City caved on the asking price and came close enough. Sterling’s new salary: £200,000 a week. 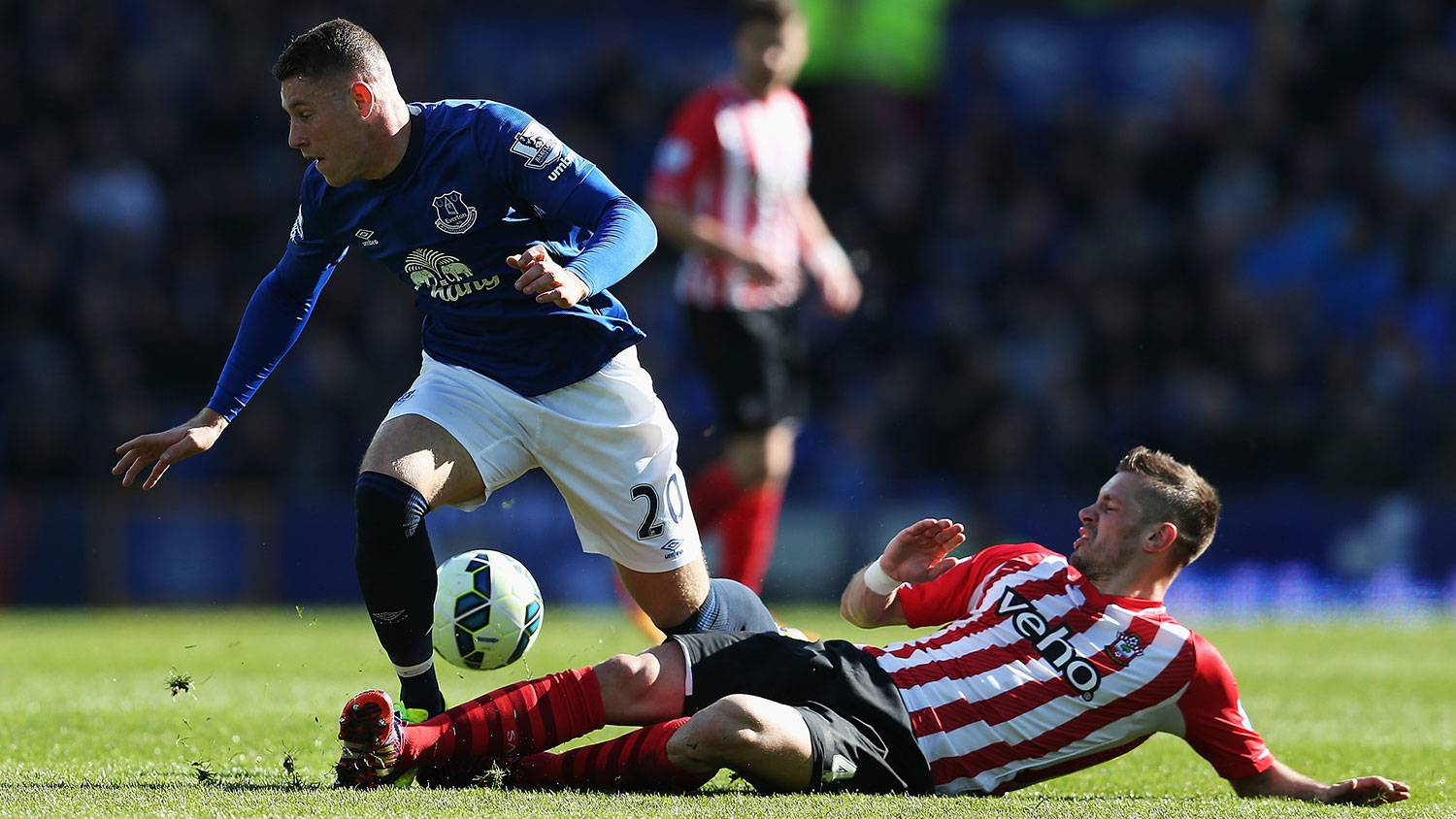 Part of the reason for the dissonance between the two transfers is simply timing. The wounds of public perception from Schneiderlin’s demands have healed thanks to the intervening year, while Sterling’s are still fresh.

When Schneiderlin initially demanded to be sold, he had three years left on his contract. Southampton could afford to wait him out, threaten to fine him, and still reasonably expect to get him back on the field, even if they knew they’d never reach another contract agreement with him. After all, they could always sell him the following summer — and well, they did.

On the other hand, Sterling remained quiet last offseason. Despite a breakout season in 2013-14 and a salary that didn’t match his talent, his performance, or his importance to the club, he didn’t make any noise. Liverpool, meanwhile, also didn’t offer him a raise. Once things went sour earlier this year, Sterling claimed that if Liverpool had offered him the £100,000 before the season, he would have taken it. Instead, by the time the talks broke down, the critical summer was only a few months away and the club was in the thick of the race for the Premier League’s final Champions League place.

It was the same situation Southampton faced — Liverpool couldn’t keep Sterling without signing him to an extension, and Sterling wasn’t going to sign an extension for what Liverpool was offering — but since Schneiderlin’s power play came earlier, when his club had an extra season of leverage, it looks like he failed. And instead, Sterling looks like the one who forced his way out of town since his demands came so close to his departure. In reality, though, they both got what they wanted.

In addition to the timing, there’s also the age difference. So much of the Sterling-directed ire has to do with his youth. At only 20, the argument goes, he is simply too inexperienced to demand so much money. Schneiderlin didn’t get any such pushback. And while he’s five years older, he’s played 95 Premier League games — exactly the same number as Sterling. Schneiderlin took a full five years longer to reach the same amount of experience … so should that make him more worthy of demanding a transfer? If anything, age is the reason Sterling costs so much money: At 20, he is already really good, he might one day be great, and he has close to a decade of play ahead of him before you’d expect him to slow down. Schneiderlin, though, is already close to — if not at — his best, and he’s simply got less career ahead of him.

As tends to happen with these things, there’s also a revisionist history developing around Sterling’s move, and it suggests he didn’t need to behave quite so “poorly” in order to force a move. That might be true if Sterling said he didn’t want to play for manager Brendan Rodgers anymore, didn’t show up for practice, and refused to go on the club’s preseason tour … all in a vacuum. Instead, there’s been a months-long campaign of condescension from club players, abuse from fans, and public hardball from ownership. It’s gone both ways.

This is what happens in a fundamentally untenable situation. Sterling wanted what he knew he was worth, Liverpool couldn’t let him stay without an extension and didn’t think he was worth what he was asking for. So both sides apply pressure and over months, things eventually deteriorate. Plus, it’s easier for Liverpool to sell Sterling if the fans want him gone. So — and sure, put on your tin-foil hat — if the relationship had truly gone past the point of negotiation, it’s probably in both Liverpool and Sterling’s best interests if the fans want him out.

For all the similarities, the biggest difference between the Schneiderlin and Sterling situations is the teams they’ve moved on from.

When Schneiderlin made waves, there was room for some sympathy. Southampton had just overachieved and finished in the top half of the table, only to go off and sell half of their team. Even the staunchest of supporters could identify with their star’s frustration.

With Liverpool, there’s never really a sympathetic time to want away. No club has had the wedge of financial power driven between its recent history and current reality more than the one on the red half of Merseyside. Only a decade removed from hoisting the Champions League trophy, they’re now just the fifth-richest club in the Premier League, and they enter each season as an underdog to qualify for the competition they’ve won five times. That mismatch of perception and reality leads to some hard choices. It leads to looking at Sterling as worth £100,000 per week, but seeing a fat transfer fee as worth more than paying him another £50,000 a week. Granted, Liverpool may be right to make the move: £49 million is a heck of a lot of cash. But it doesn’t change that by holding out for what he was worth, by forcing ownership to choose, Sterling poked at what’s still an open wound for many of the club’s fans. Once on top of the food chain, Liverpool is still settling into a new reality: Sometimes it’s the right decision to sell to the people above you.