Of all the reasons New England’s offense stays among the best in football — Tom Brady, Rob Gronkowski, dark magic — its ability to shape-shift may be the most important. A week ago, New England hammered the Colts behind a monster game from Jonas Gray, the latest formerly anonymous Patriot to suddenly look like a star. Yesterday, as the Pats put up 34 points against the league’s best defense, Gray didn’t even touch the ball.

Part of that is likely because Gray was late to practice Friday and ended up missing an entire day’s work, but for most of the game against Detroit, New England didn’t seem very interested in running the ball anyway. Most of LeGarrette Blount’s 12 carries — he’s back, apparently — came near the goal line or with the Patriots hanging on to a 25-point lead late in the second half. Running against the Lions tends to be an exercise in futility, so the Pats had Tom Brady sling it 53 times instead.

This wasn’t the best game you’ll see from Brady, who averaged 6.6 yards per attempt and missed a couple of deep shots to Brandon LaFell and Julian Edelman, but no one has his best game against this defense. New England moved the ball better than just about anyone else in football has against Detroit, and did it in a way that was a complete departure from last week. Coming into Sunday, the Patriots ranked fourth in offensive DVOA, and that ranking will likely get another bump. It’s the typical story for the Pats, who haven’t finished out of the top seven in a ridiculous 11 years. And they’re doing it the same way they always have: by not doing it the same way at all.

When Boldin came to San Francisco, in exchange for nothing but a sixth-round pick, he was supposed to be nearing the end. All Boldin did in his first season with the Niners was catch 85 passes for a team-leading 1,179 yards. That wasn’t supposed to happen again this year, not with Michael Crabtree starting the season healthy and the 49ers’ passing game expecting to find a higher gear. That hasn’t happened; Boldin, yet again, has been the lone bright spot in the San Francisco passing attack. 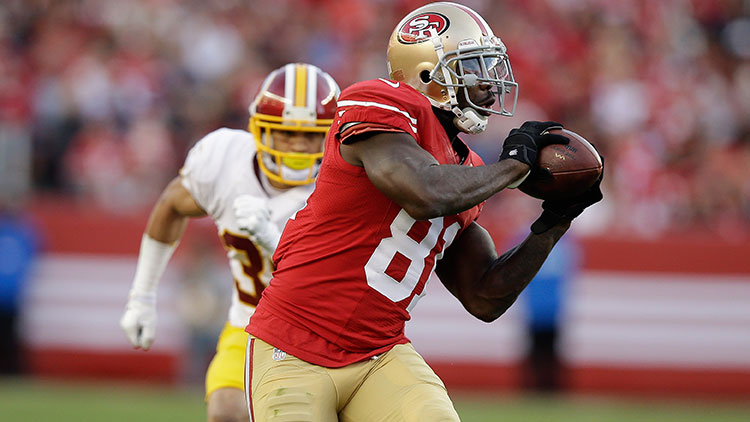 He had nine catches for 137 yards and a touchdown Sunday, but the play of the game came on a 29-yard catch with the Niners down three in the fourth quarter. Colin Kaepernick hit Boldin running up the seam, just as safety Ryan Clark arrived. Their helmets collided, and in came a flag. But instead of dropping the ball or hitting the ground at the spot of the impact, Boldin caught the pass and managed to gain about five more yards before finally being dragged down.

Boldin added one more catch on the drive to get the Niners inside the 5-yard line, allowing Carlos Hyde to punch in the game-winning score. The entire sequence, and really the entire game, was a reminder of what it’s been like to watch Boldin for the past 10 seasons. He’s a linebacker that happens to be built just a bit more like a wide receiver. I’m not sure how many more years he has left — but then again, we were all wondering the same thing two years ago.

Even before Odell Beckham’s Internet-shattering touchdown grab last night, one of the best things to come out of this NFL season was that clip of Beckham in warm-ups, casually snagging a bunch of passes with one hand.

Yesterday, before Beckham made yet another ridiculous catch, a clip of Joe Haden doing something similarly insane began making the Twitter rounds. The reactions to all of this — from the pregame early in the day up to what Beckham did last night — are just proof that some sort of one-handed catch contest needs to happen. Whether it’s a stand-alone show or part of some Pro Bowl skills contest, whatever. It doesn’t matter. Scoring can happen one of two ways: Either it’s like H-O-R-S-E, and each player has to replicate the previous catch, or we get a group of judges and score it like the dunk contest. Beckham is clearly the favorite, but I’m wondering if that’s just because we haven’t seen other guys try. Make this happen, NFL.

With a win yesterday, the Bengals held on to the top spot in the AFC North for at least one more week. Despite an ugly pick-six to Johnathan Joseph, Andy Dalton looked like an NFL quarterback for the second straight week. A bit of that was thanks to some excellent work by his wide receivers, but still, Dalton has responded well to the debacle against Cleveland.

Even with that in mind, though, the most encouraging sign for the Bengals is that they’re finally starting to put up some resistance against the run. For most of the season, Cincinnati ranked last in run defense DVOA. Holding Mark Ingram to less than three yards per carry last week bumped them up to 30th, but they had another serious test with the Texans on Sunday. Not having to see Arian Foster was a nice reprieve, but even with Alfred Blue, Houston remains a team built on running the ball.

That foundation crumbled yesterday. Blue averaged just 2.9 yards on his 16 carries, forcing the ball into Ryan Mallett’s hands and, eventually, over the head of every Texans receiver. The Bengals’ pass rush is still an issue, but their pass defense is solid enough to slow teams down. Vontaze Burfict should be back relatively soon, and if Cincinnati can continue to hold up against the run, there’s a chance it holds on to that division lead for the rest of the season. 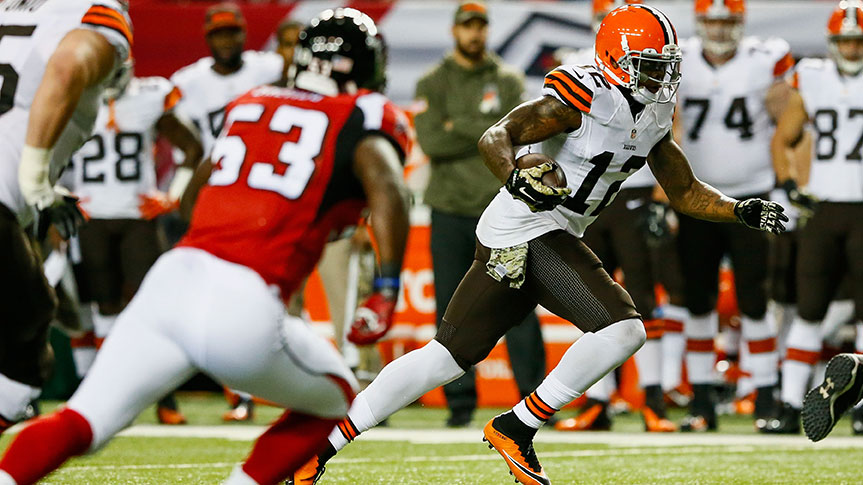 The Bengals need all the wins they can manage because it doesn’t look like the Browns are going away. Mike Smith’s clock management certainly helped, but no matter the reason, Cleveland is 7-4 and still very much alive in the AFC North.

The most encouraging part of Sunday’s win might be that the Browns managed to pull it off without playing all that well. Brian Hoyer’s three interceptions still weren’t enough to take Cleveland out of the game, and despite a rough start, it’s reasonable to think that with Josh Gordon back, the Browns will be better in the passing game for the rest of the season.

Even if the Browns do fall short of the playoffs, it’s easy to find hope for the future. Isaiah Crowell looks like a find at running back, their offensive line — even without Alex Mack, who’ll be back next season — is filled with stars, and now we finally get to see this offense with Gordon, who managed a casual eight catches and 120 yards in his return. The quarterback situation may not be solidified yet, but Mike Pettine is well on his way toward putting together something promising in Cleveland.

Yesterday may just be a product of playing against a pissed-off Seattle team on the road, but this is what I was worried about with the Cardinals. Arizona’s defense isn’t a loser because of how they played; it’s a loser because I feel bad for them. On the Seahawks’ first four scoring drives, their worst starting field position was their own 42-yard line.

The Cardinals limited the Seahawks to just 293 yards, sacked Russell Wilson seven times, and held Marshawn Lynch to 39 yards on 15 carries. All of that is enough to win most games, but yesterday still never really felt close. Arizona managed next to nothing on offense, and by the time Steven Hauschka’s fourth field goal made it a nine-point game midway through the third quarter, the game felt like it was over. Laying an egg against the Seahawks in Seattle happens on occasion, but if the offense doesn’t start putting up points, it could be a long five weeks for the Arizona defense. 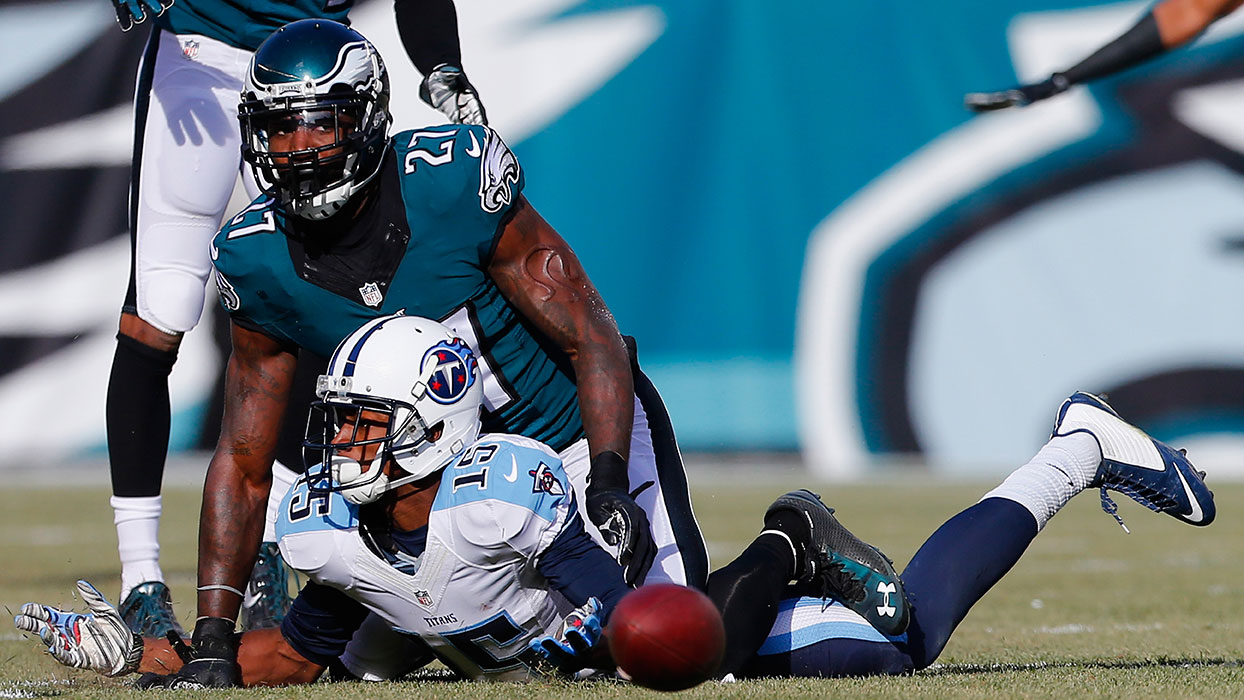 For most of the season, the Titans have failed to be bad in any interesting way. Their quarterback situation, as it’s been for a while now, is regrettable — and it’s held them back in whatever ways they might be ready to show some improvement. What is a little surprising, though, is just how bad Tennessee has been on defense. The Titans are sitting last in run defense DVOA, and giving up 130 yards to LeSean McCoy probably won’t help.

Heading into the home stretch, the Titans are pretty much the opposite of the Browns. There’s plenty to be excited about in Cleveland no matter how the rest of the season shakes out, but in Tennessee, it’s hard to find solace in all that much. The offensive line, which the Titans invested in so heavily over the past few seasons, hasn’t played well. Their receivers have disappointed, which may be partly because of the quarterback play, but it’s hard to tell. And their defense has taken a serious step back in its first season under Ray Horton. Sure, there are a few scattered stars on this team, namely Jurrell Casey and Jason McCourty, but for the most part it’s a group of players that’s hard to get excited about.

It’s hard not to feel for Ryan Tannehill. Coming into the season, he had a shiny new pair of tackles that the Dolphins were hoping could help turn around their offense. They did … for the most part. With Branden Albert and Ja’Wuan James in the fold, the protection issues that plagued Miami last season disappeared, and for the first time since he was drafted, the Dolphins seemed to be building something on offense with Tannehill under center.

That all started to change against the Lions, when a torn ACL and MCL sidelined Albert, who had been playing at a Pro Bowl level, for the season. And it got even worse Sunday, when James joined Albert on the bench with a shoulder stinger. James will probably be back sooner rather than later, but playing two backup tackles is something a team fighting for the playoffs just can’t afford.

While Tannehill was sacked only once yesterday, he was under consistent pressure for much of the second half. Now at 6-5 and barely clinging to wild-card life, the Dolphins really can’t afford to lose James for an extended period of time. But with DeMarcus Ware and Von Miller setting up camp in the Miami backfield, they got a good glimpse of what life will be like if they do.

When Calvin Johnson was out for a stretch in the middle of the season, it was easy to give the Lions offense the benefit of the doubt. Few players change the complexion of a game the way Megatron does, so you’d expect that the Detroit offense would look different with a healthy version of him back in the lineup. Except, a few games into his return, it hasn’t.

In Miami and Arizona, the Lions have faced two of the league’s best defenses over the past month; the Patriots defense, though, doesn’t compare to either of those. New England has its vulnerabilities, and the Lions failed to take advantage of any of them. Matthew Stafford had another miserable day — 18-of-46 for 264 yards — but the running game might have been even worse. Joique Bell averaged just 2.5 yards per carry against what’s been, at best, an average run defense.

Detroit has its share of offensive-line injuries as well, but just like the Dolphins, the Lions are getting to a point in the season when they’re going to need to find some results on offense. Wins by the 49ers and Seahawks mean that the Lions are tied with both in the NFC wild-card race. Despite the stumble yesterday, the Lions defense has been the best in the league for most of the season. If their offense can’t pick up its end, Detroit will have found another heartbreaking way to miss the playoffs.