Here’s a snapshot of how inherently bizarre things have gotten at Penn State over the past few years: Last week, a blog operated by a local clothing and souvenir store purported to have exclusive information from someone in the NCAA regarding the potential end of the crippling sanctions against the school’s football program. The gist of the blog post was that Nittany Lions coach James Franklin had received a convoluted Sophie’s choice of a proposition from the NCAA: keep the current scholarship limitations and end the bowl ban immediately, or end the scholarship limitations and accept one more year of bowl ineligibility.

As with the myriad rumors and suppositions and implications that have slithered across message boards and landed in my inbox since Jerry Sandusky’s awful crimes came to light, this report may have been based in fact, or it may have been the product of a loopy game of telephone. All I can say for certain is that roughly 26 months after the NCAA levied sanctions against Penn State in the wake of former assistant coach Sandusky’s heinous acts against children, college sports’ governing body rolled back pretty much everything on Monday. Following a glowing progress report from former U.S. senator George Mitchell, the NCAA lifted Penn State’s bowl ban effective immediately, striking from the record the final two seasons of planned punishment; and next year, Franklin’s second as coach, the team’s scholarship count will be restored to the full 85.

As someone who grew up with Penn State football and could not shake my ties to State College even if I tried, I should probably feel unqualified happiness about this. But honestly, I’m not sure what the hell I’m supposed to feel anymore. 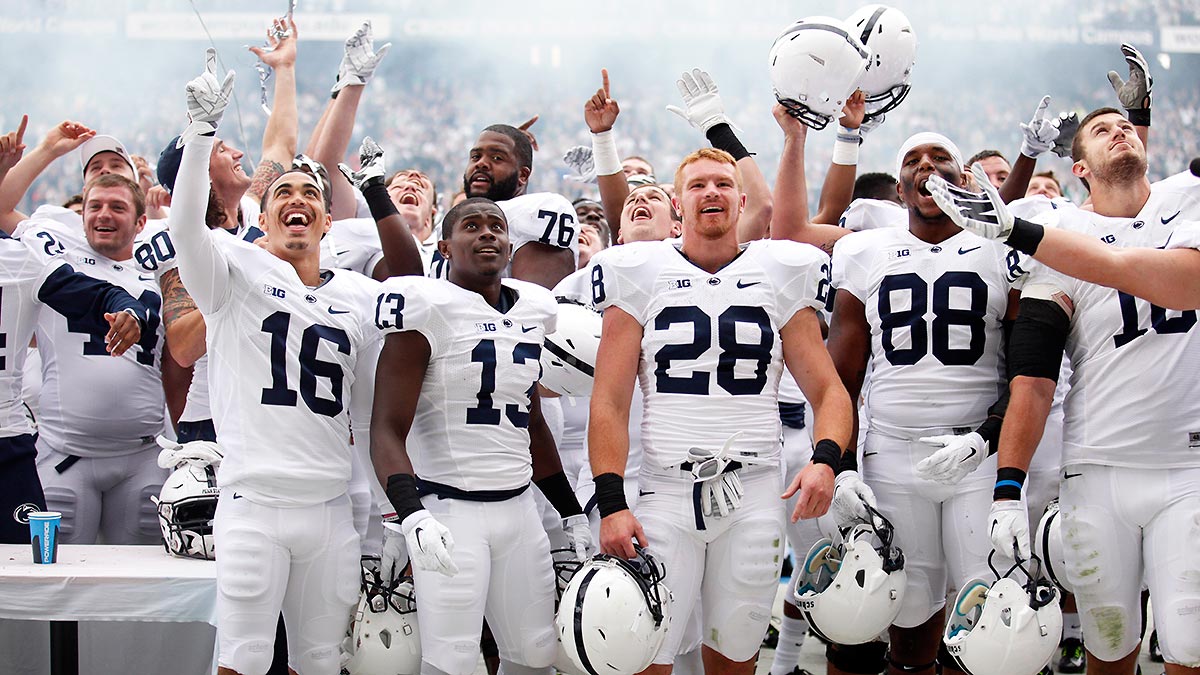 Nearly three years on, there remains a void at the center of the Sandusky narrative; there are unanswered questions of institutional responsibility and personal responsibility, some of which may be settled in the upcoming trials for several Penn State administrators who formed the chain of command during Sandusky’s tenure, and some of which will almost certainly never be put to rest. Much of the story remains logically and emotionally incomprehensible, which I suppose is why the facts became a matter of perception. Really, that all started the moment Penn State fired Joe Paterno a few days after Sandusky’s crimes were revealed, when outraged students took to the streets and the rest of the world began to regard my hometown as if it were a Third World outpost of clueless yokels.

The Freeh Report, a damning assessment of blame released in the scandal’s later stages, escalated Penn State fans’ feelings of alienation. But the true trigger point for conspiracists occurred when the NCAA acted on the Freeh Report’s findings by choosing to punish the school in July 2012. The ensuing sanctions, as with most NCAA punishments, were based on an entirely arbitrary standard; since Paterno had died and nearly everyone else directly associated with the Sandusky scandal had left power by that point, the sanctions became a rallying point for everyone who felt that certain Penn State figures had been unfairly scapegoated, or that the NCAA had overstepped its bounds.

And so the sanctions actually served the opposite purpose of what they were meant to achieve. The discussion around Penn State turned on the callousness of NCAA president Mark Emmert for punishing the innocent players and coaches who had been left behind. Potentially constructive discussions were napalmed in favor of righteous anger and underground theorizing1 revolving around Paterno, which I think is what former coach Bill O’Brien was getting at when he vented to the Harrisburg Patriot-News‘s David Jones in the weeks before he left Penn State to take the Houston Texans’ job.

Even the $60 million fine Penn State paid out, meant to go to child sex-abuse prevention and awareness, became a source of contention.

I know I’ll get furious retorts from certain people for even bringing up this quote, and I guess I should note that O’Brien later apologized for his rant; I should also note that it’s possible he might have left for the Texans job even if this hadn’t been a mitigating factor, and that he likely would have departed for the NFL eventually regardless, perhaps when quarterback Christian Hackenberg left with him. But as admirable as O’Brien’s two years as Penn State’s coach turned out to be, and as resilient as his teams were, I think there was an undercurrent of discomfort and rage to the O’Brien era that will never be fully erased. And for that, Emmert deserves at least partial blame. 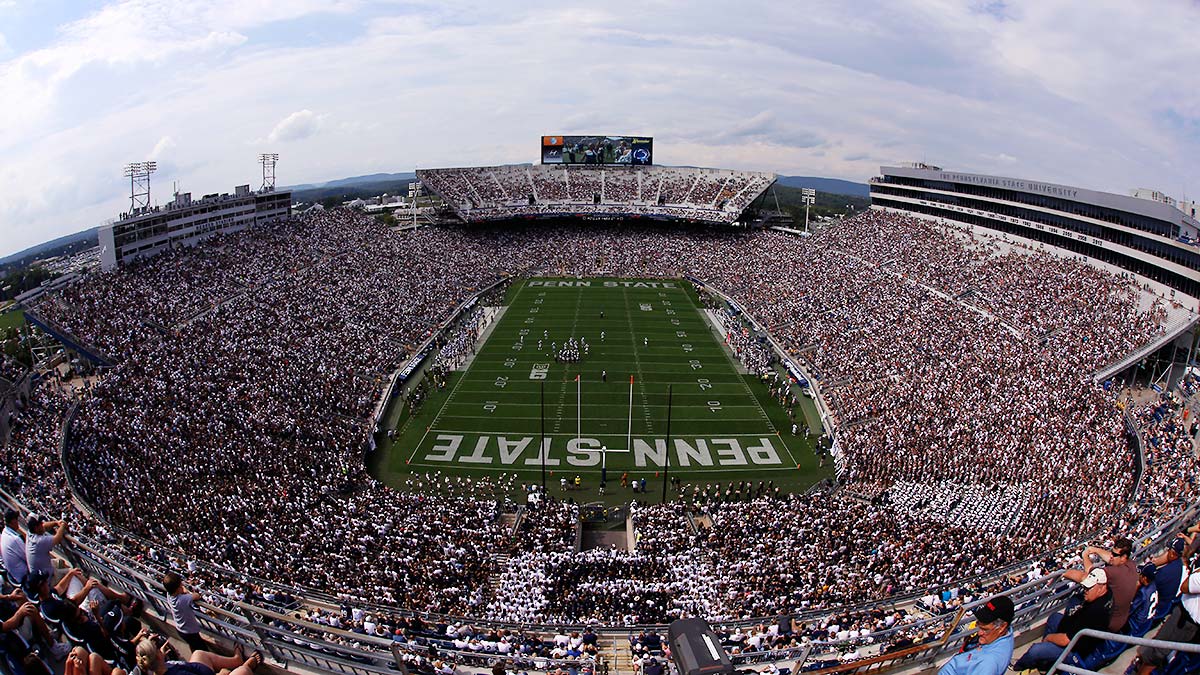 I’ve said this from the start, and I’ll reiterate it now: There are far larger concerns here than Joe Paterno’s legacy. I understand the continued need for certain people close to Paterno — most notably his son, Jay, who in a recently released memoir tries to explain his father’s position and argue for his lack of culpability — to attempt to rebuild his reputation, and I understand the deep emotional connections Paterno fostered over his decades in State College, because I grew up under that same sepia-toned umbrella. But this should never have been about Paterno alone; this should always have been about Penn State, and what did go wrong within the chain of command, and what could be done to repair the institution, and what we can do to prevent these things from occurring at other institutions. This should have been an introspective moment. In many ways and for many people, it was; in many others ways, however, Emmert’s sanctions offered an excuse for some in the Penn State community, feeling shamed and put-upon, to lash out at a visible enemy.

I don’t know if this is the moment when we can begin to let go of all that fury, but I know I’m not the only one who wishes that we could. Last week, Penn State’s new president, Eric Barron, issued a long and eloquent statement pleading for civility within the university community. “There are honest disagreements on fundamental issues related to whether our institution acted appropriately, how our institution handled a crisis, and whether the sanctions that resulted are appropriate,” he wrote. “Reasonable people can be found on all sides of these issues. The reasons for this disagreement are clear. Much is still left to interpretation and the issues have considerable emotional significance to us all. We are likely never to have the full story. We are equally likely never to reach consensus.”

For some people, that sentiment won’t be enough. For others, nothing will be enough until Paterno’s legacy is restored. There’s still so much anger simmering below the surface, and I don’t know where it will go now that those harboring it can no longer direct it toward the NCAA. Everything still feels fragile and fractious within the Penn State community. The story has become about the gaps within the story, and I’m not sure how we can make it whole again.