Last night in Indianapolis, March Madness finally came to a cacophonous, crazy conclusion. Here are some riffs and GIFs on Duke’s win over Wisconsin, and the end of the college basketball season. 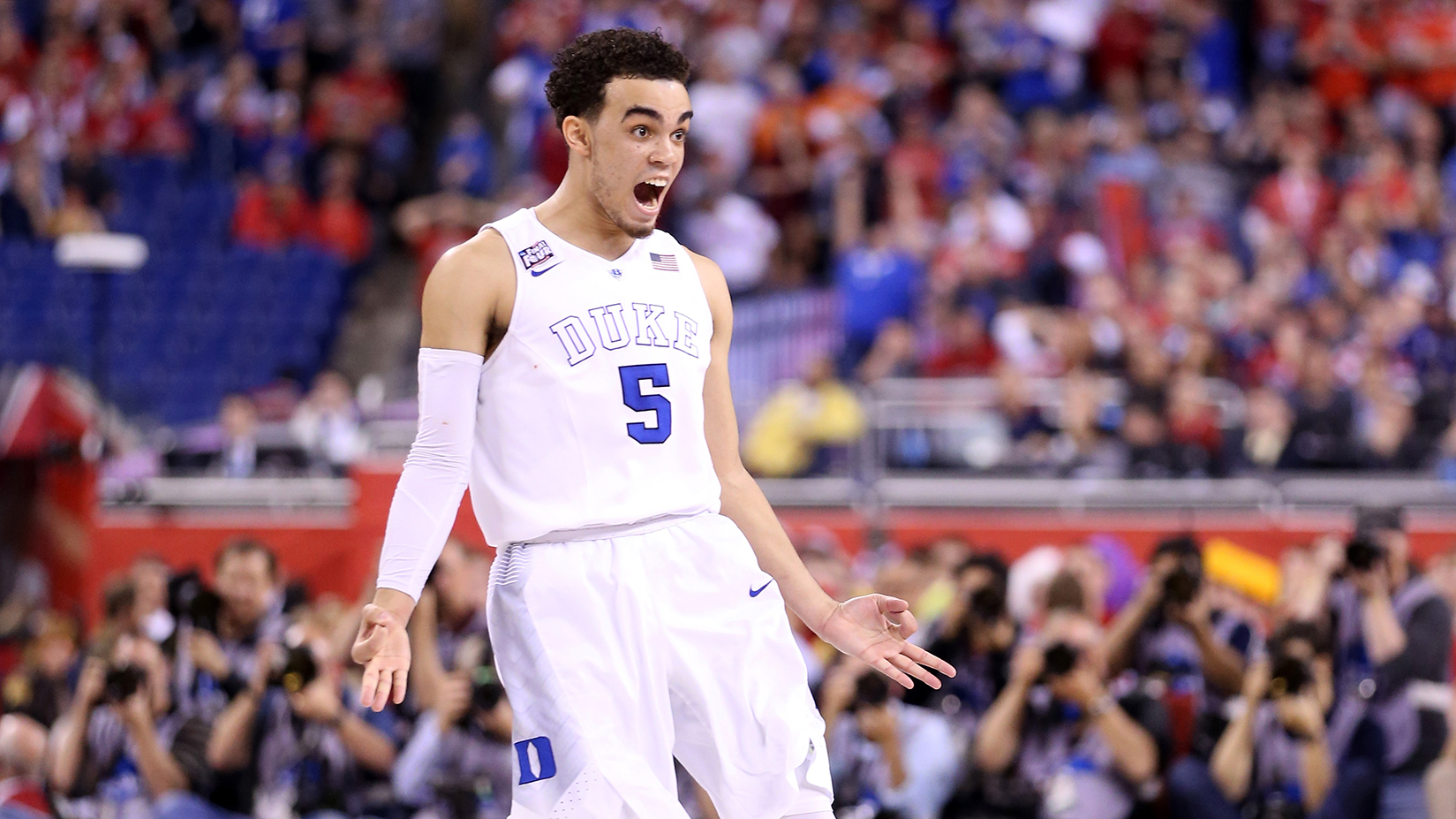 Danny Chau: In 1995, UCLA’s diminutive Frances Pomeroy Naismith Award winner Tyus Edney etched his name into NCAA tournament lore early. In the round of 32, with no. 1 UCLA down one with 4.8 seconds left against no. 8 Missouri, Edney juked a backpedaling defender with a behind-the-back dribble and lofted the ball off the glass and in. It was one of the most iconic plays in tournament history and has withstood the test of time largely because it set UCLA’s wheels into motion for its national title run. Edney, because of a wrist injury suffered in the Final Four, managed only three minutes in the championship game. Ed O’Bannon may have come away with the Most Outstanding Player, but everyone in America knew Edney was the most valuable. 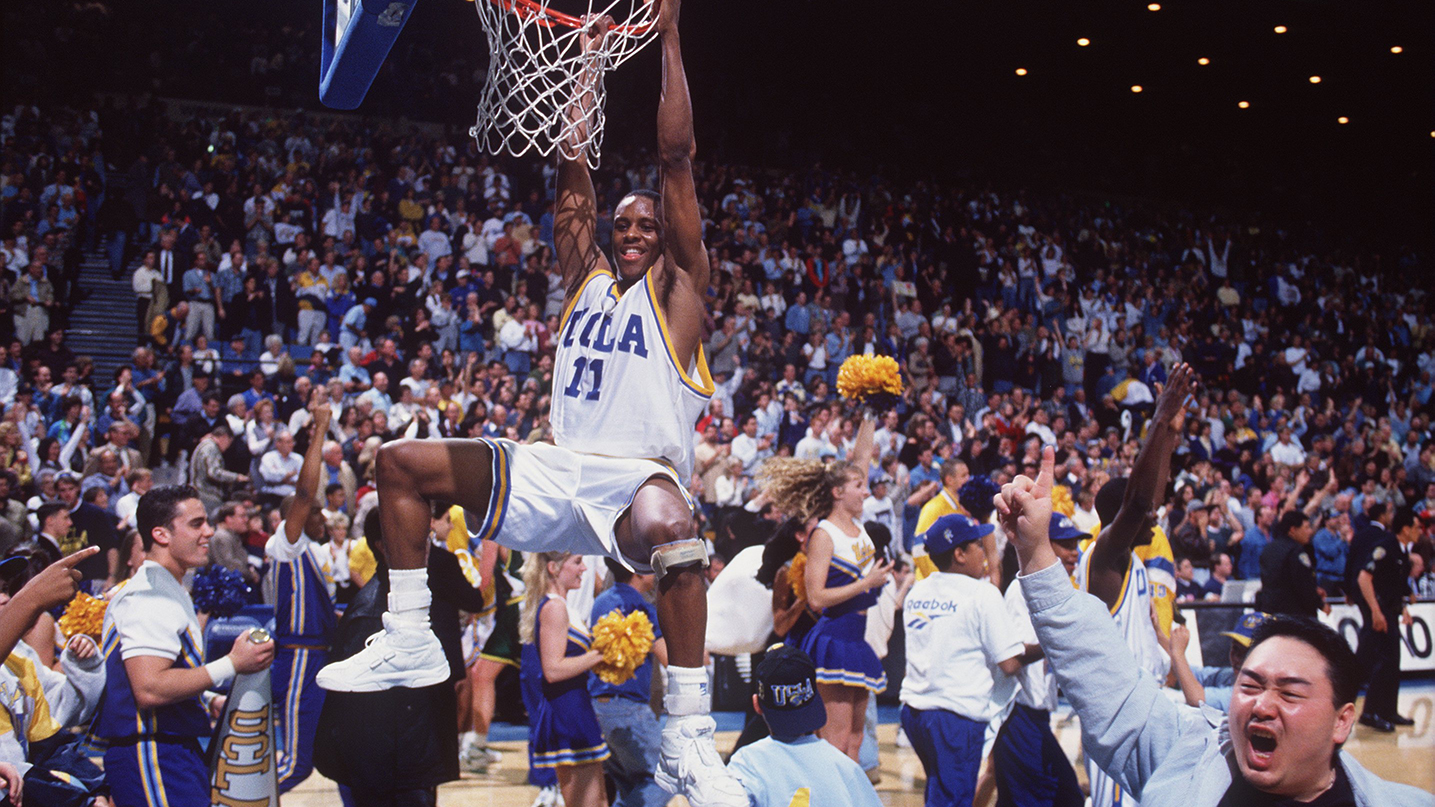 Nearly 20 years to the day when UCLA celebrated its 11th national championship, a new Tyus picked up the mantle and accomplished what the former couldn’t. Tyus Jones, who was born a year after Edney’s miracle layup, exacted his will on national title runner-up Wisconsin, scoring 19 of his 23 points in the second half.

All the Grantland coverage of the 2015 NCAA tournament, right here.
Last night, Jones was, as he has been for most of the season, a steadying presence for Duke. Jahlil Okafor is the luminous sphere to which all other Blue Devils orbit; Justise Winslow is the glue guy, the milkman, and the personal kickboxing instructor; Grayson Allen’s one shining moment gleamed the brightest, and was easily the biggest story of the night. But Duke doesn’t get its win without Jones’s timely buckets — including a 3-pointer that gave his team a 59-58 lead with 4:06 remaining. His legs were splayed out and grazed a defender, just as he’d done before, and he promptly dropped to the floor, choreographing the fall like a pro wrestler. If you’re looking for Jones’s greatest NBA-caliber strength, and aren’t willing to settle for something intangible like poise, his ability to sell contact on 3-point attempts will immediately land him in rarefied company. It was the kind of performance that will likely vault him a little too high in the draft rankings in the coming days, but in the moment, it feels right.

So much has changed in 20 years. O’Bannon, once college basketball’s most dominant athlete, has become a different kind of legend; he is now the specter that haunts the NCAA’s very foundation. Mike Krzyzewski is suddenly the biggest beneficiary of the one-and-done era left standing. The man who, in the past, demanded his players to honor their commitment to the school and to him stands as a champion alongside three children who are likely to bolt for the NBA the second this championship euphoria wears off.

But hopefully one thing about college basketball will remain consistent: Hopefully, in 20 years, we’ll see a new Tyus emerge, like college basketball’s version of Halley’s Comet. We’ll have yet another excuse to celebrate the runs of Tyuses past, and it’ll be great. See you in 2035.

In the history of college basketball, 50 percent of all D1 guards with Tyus as a first name have won the national championship. 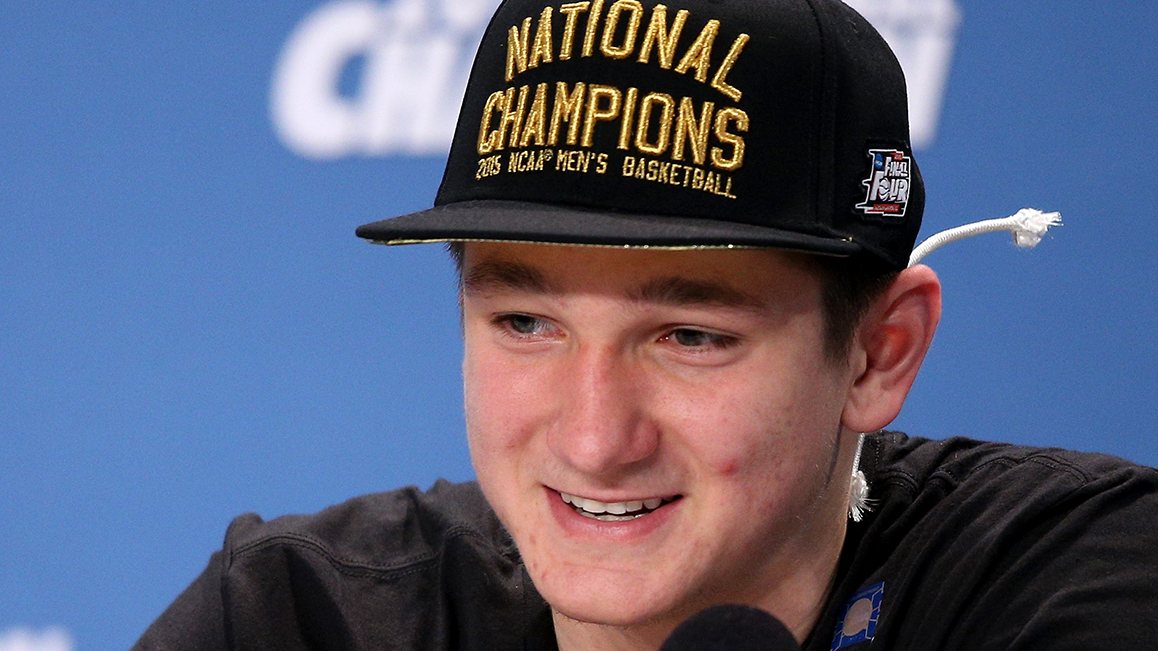 Andrew Sharp: The takeover happened almost midway through the second half. Wisconsin was up 48-39, Justise Winslow and Jahlil Okafor were both in foul trouble, and Duke had no answers. That’s when young Grayson Westbrook went to work. He hit a 3 and followed it with a three-point play the next trip down. After a Wisconsin 3, he added two more free throws to cut the deficit to four.

When these two teams played in December, Grayson Allen couldn’t even see the court. April was different. While a Wisconsin junior like Sam Dekker went invisible, the Duke freshman came off the bench and went at everyone. He pulled up from outside, drove into the lane at big men. He saved Duke’s national championship dreams.

Yes, Tyus Jones scored 13 points in the final 11 minutes to seal the game, but don’t get confused. When Duke’s entire season was on life support, there was one freshman who stepped in with the paddles and shocked the team back to life. He was so fearless, you couldn’t help but respect him.

I was wary at first. There are already too many people telling me to like this Duke team, and here was a throwback to the über-villains of the past. Not hating Allen seemed like a bridge too far. You had that Adam Banks, cake-eater cockiness, the 3s … even the name was perfect. “Grayson Allen” sounds like someone from a Bret Easton Ellis novel. The Internet was ready with memes the second he took the floor. Finally, we had a player to despise.

But Joffrey Jordan just wouldn’t stop attacking. He won me over.

It’s actually perfect that he looked like all the players most of America has hated for the past 20 years. Between Jones, Winslow, and Quinn Cook, this was the least-hatable group of Duke stars we’ve ever seen. Then came the final game, when we finally saw the cocky face of all Duke teams past … and by the end, even Grayson Allen was awesome.

Weird year. Congrats, Duke. Let’s get back to normal next season.

Chris Ryan: Firm “yes.” And that is not an insult toward March Madness.

Too Many Franks on Your Team, That’s Why Your Winslow 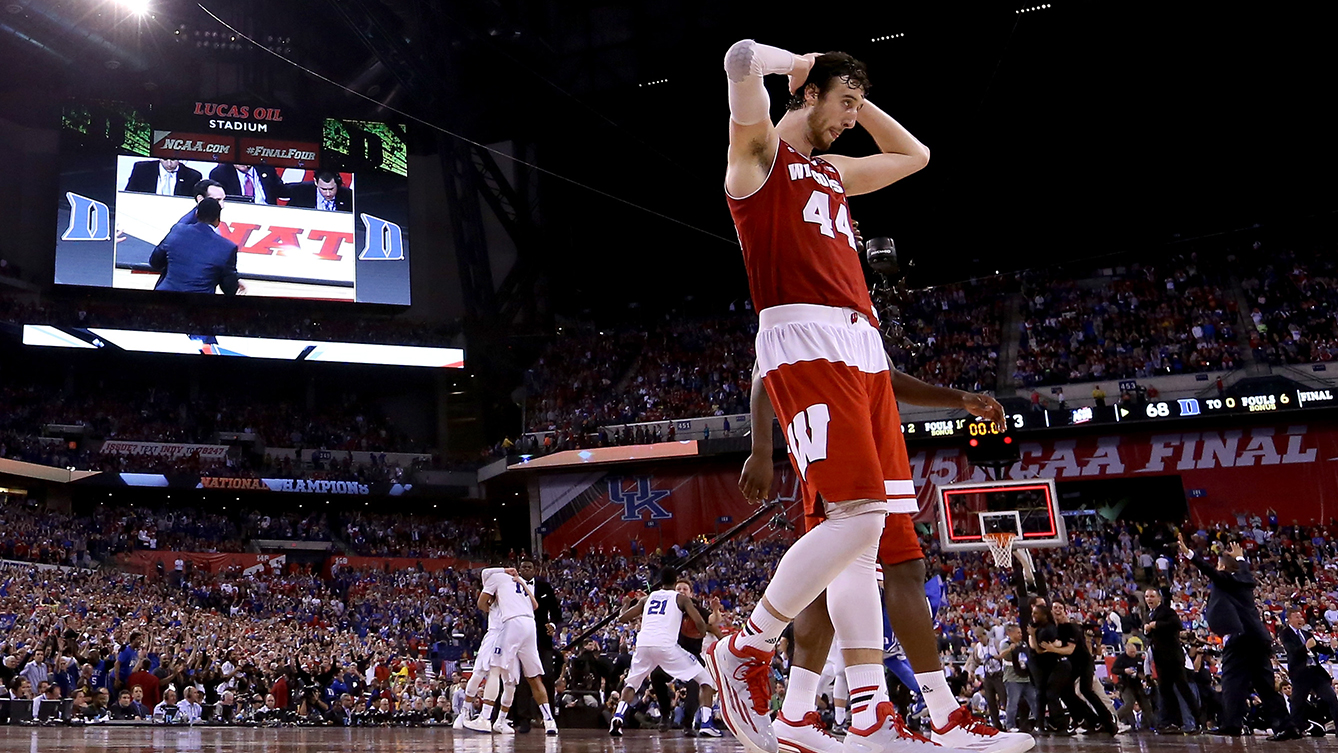 Ryan O’Hanlon: With a little more than nine minutes left, Frank Kaminsky got the ball on the right elbow, took Jahlil Okafor’s lunch money, bought a pie, and smushed it into the freshman’s face.

Following Kaminsky’s made free throw, Wisconsin was up by four, Okafor was sent to the bench, and it seemed like, despite Duke’s Grayson Allen–fueled comeback, the Badgers might’ve finally pushed the game out of reach. Of course, two minutes later, things were tied, and Wisconsin would only lead again briefly at the 4:25 mark. Kaminsky scored five more points after the and-1, but his team only managed nine.

It’s a shame we didn’t get to see the senior do much more bullying over the home stretch — and not necessarily because it would’ve led to a different outcome. While Kaminsky’s a surefire first-round pick, he’ll be yet another skilled big man in a league that currently covets them. In college, our guy was bigger than everyone and better: A smart slip pass or some cute low-post footwork is enough to befuddle most D-I defenses, but when it comes from a guy who’s 7 feet tall, we’re basically watching Zeus throw a lightning bolt at a dartboard.

Big Frank was the best guy on the floor last night, and, well, we probably won’t be able to say that ever again.

Jason Concepcion: Discipline. Dedication. Teamwork. Attention to detail. A singular focus on achieving a goal. That’s leadership. That’s how this country was founded. That’s how the West was won. That’s how you conduct the most fire arrangement of the national anthem for 100 trumpeters since the founding of the republic. 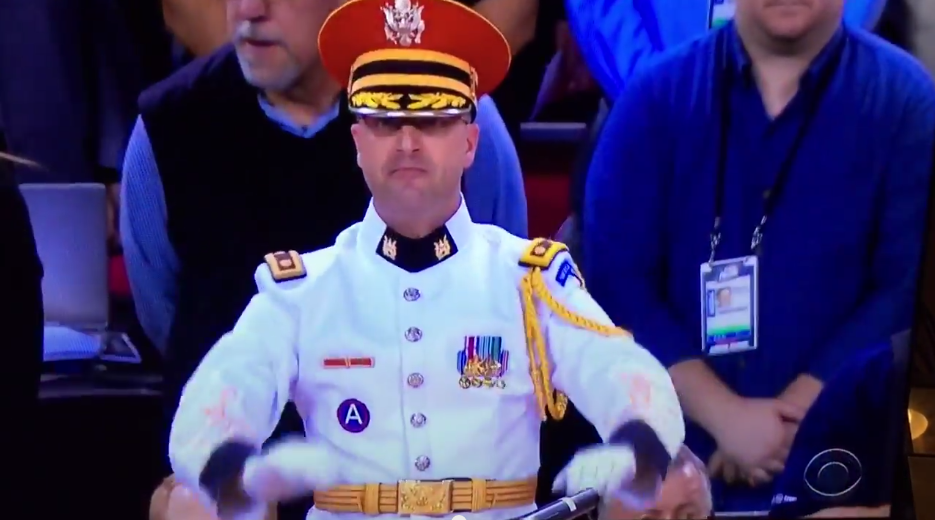 Look at this dude’s goddamn face. That is the look of a man who understands two inarguably true things: (1) The U.S Army Herald Trumpets is absolutely crushing a rendition of “The Star-Spangled Banner” that sounds like the post–Battle of Yavin medal ceremony from Star Wars crossed with the soundtrack to John Ashcroft’s dream journal. And (2) in, like, a second, a fucking bald fucking eagle is going to soar majestically over the throngs, entrancing all who gaze upon its flight, until, stirred, they cheer like the Army of the Potomac II Corps watching Pickett’s Charge dissolve under a hail of musketry. Young and old, from the humble students in Wisconsin hoodies to Mickie Krzyzewski’s studded leather jacket.

You Brought Me to Indiana for This? 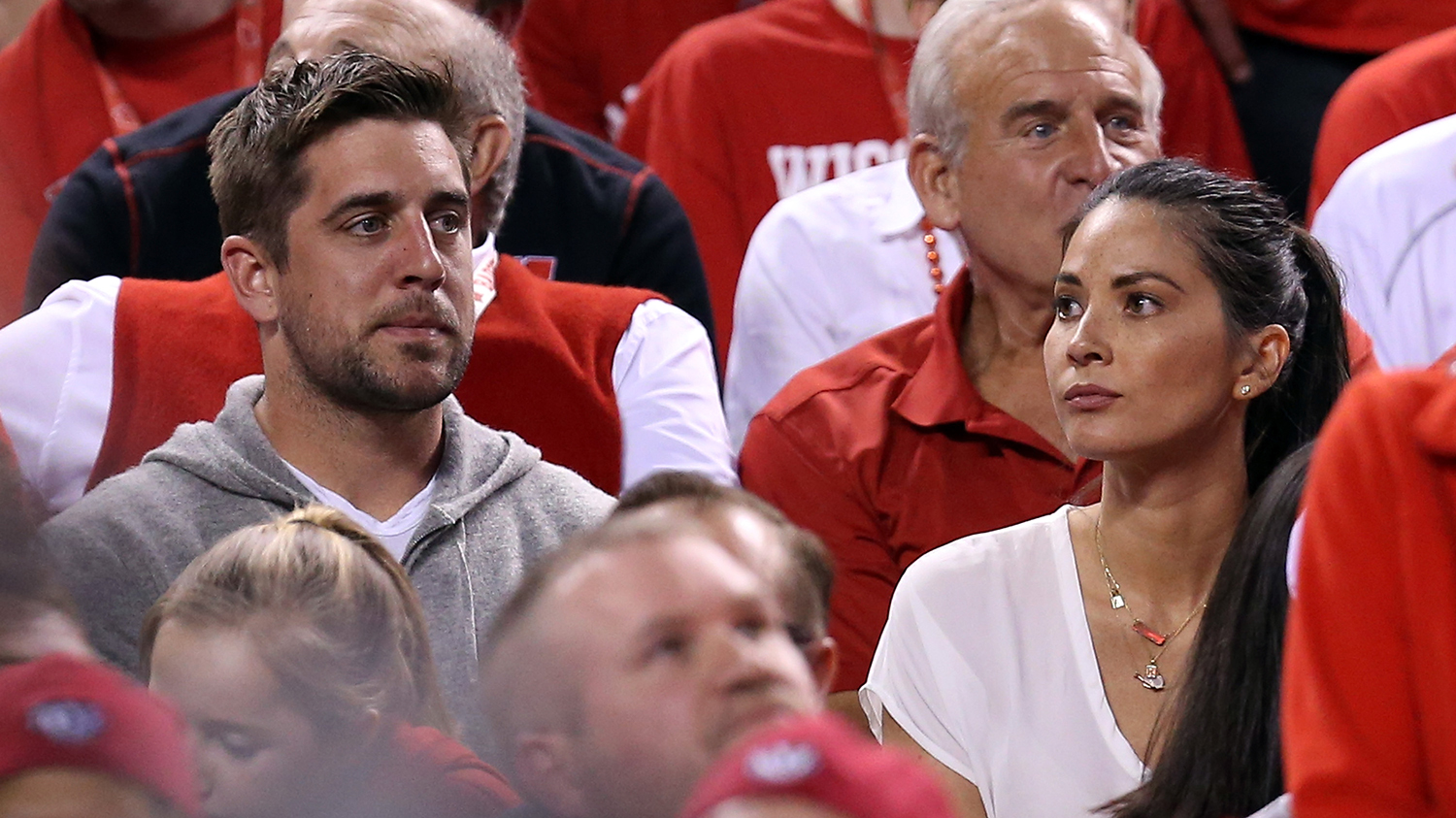 Brett Koremenos: For the past few years, we haven’t seen eye to eye. Whether it was fair or not, I publicly and privately said many snarky and hurtful things about your attempts to regulate basketball games. I’ve wondered why there isn’t an upper age limit for your profession, demanded more rigorous testing of reaction times and emotional intelligence, and advocated for an academy to make you better suited to your job.

Well, I didn’t know how good I had it with you until my extended tryst with college basketball this season. Thankfully, before things got too serious, I realized that college officials aren’t the answer for anything unless the question is “What do you get if you make soccer refs worse?”

Last night’s championship game featured something like 14 future first-round picks, but somehow the individuals that stood out the most to me were the guys in the black-and-white uniforms. Between watching Sam Dekker’s obvious extra steps during awkward layups and witnessing Justise Winslow get rewarded for crashing into stationary Badgers defenders like the boulder from Raiders of the Lost Ark, I began to long for Joey Crawford’s regulation of laughter.

So I promise you: From now on, no more Tim Donaghy jokes or quips about your incompetence. I’ve seen what else is out there and realized I never had it so good.

Yours now and forever, 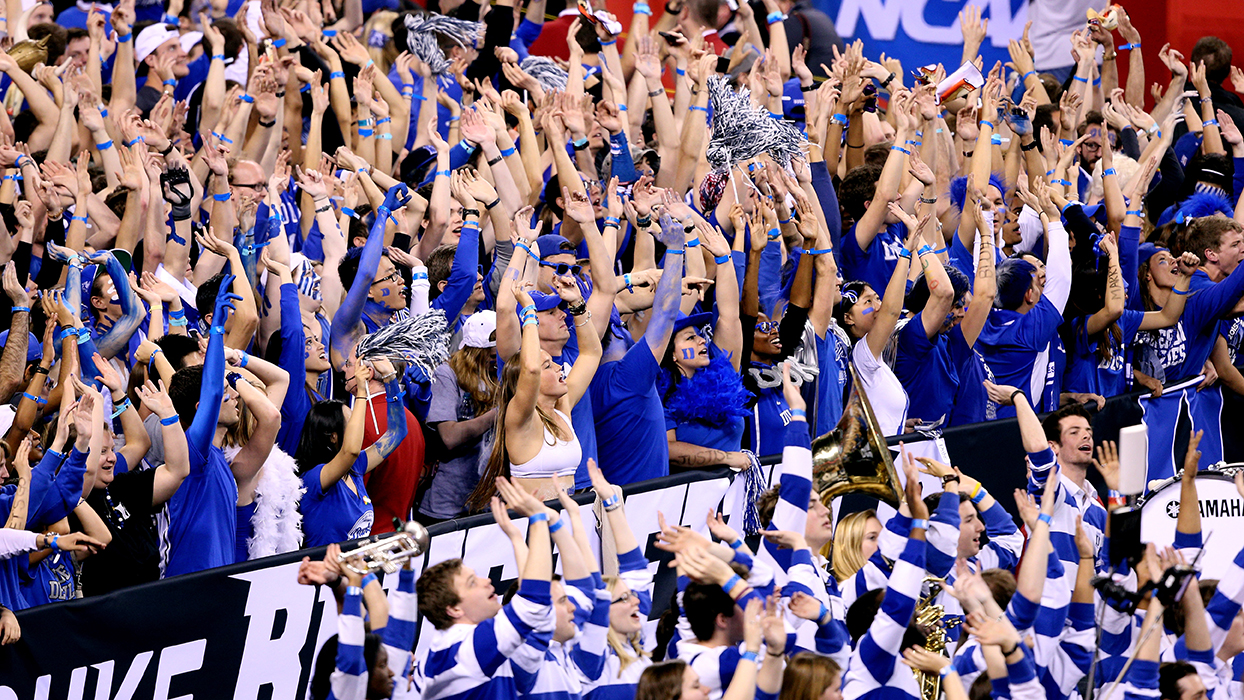 Kevin Lincoln: I like this Duke team. I have not liked every Duke team; I went to Duke, but I’m also a free-thinking human being. I get why you don’t like Duke. It’s cool. But you should like this Duke team. These guys — they’re gems. Lunatic slashers, like a bunch of F-16s piloted by dogs. Jahlil Okafor is the Platonic Big Fella. Even Coach K seemed less frothy this year.

Most notable, though, is that there are only eight of them. Eight scholarship players. Gregg Popovich starts more guys than that. After Rasheed Sulaimon was banished and Semi Ojeyele transferred, the team became, in its entirety, senior Quinn Cook; the four superfrosh; Marshall Plumlee, an Ent; Matt Jones, a 3-and-D project; and power forward Amile Jefferson. That isn’t depth, it’s condensation on a window.

Watching eight players win is enervating. It feels like playing a video game with fatigue turned off. Maybe this has more to do with my advancing age, but these kids just never looked tired, not ever — their energy reserves appeared nuclear. If college sports are a celebration of vitality, then this year’s Duke team is the Fountain of Youth. Shouts to Juan Ponce de León — I hear his office near Cameron is nice.