It’s been 11 years since the late Rick Majerus, draped in that cream sweater, was roaming the sideline at the University of Utah, turning a program with a proud tradition into a national powerhouse. In his 15 seasons with the Utes, not a single team under Majerus’s watch finished with a losing record. He not only won, but he attracted future NBA stars like Andrew Bogut, Keith Van Horn, and Andre Miller to what, at the time, was essentially a mid-major1 while also nearly capturing a national title in 1998.

After Majerus left the program in 2004, the Utes began to lose their foothold among the nation’s elite. Majerus’s successor, former Eastern Washington head man Ray Giacoletti, started off with a bang, leading the Utes to the Sweet 16 in 2005, but he followed that up with successive losing seasons, which led to his dismissal. Jim Boylen, a former Michigan State assistant, followed and earned a conference title in 2008-09, his second season in charge, but a combined 27-35 record the next two years led to his departure. With four losing seasons in seven years, Utah’s erosion from powerhouse to also-ran was an unacceptable outcome for a program with a history of excellence that dates all the way back to the 1950s, when Hall of Fame coach Jack Gardner took over the program.

Utah had to get its next hire right. And with the team now one win away — at home against no. 7 Arizona on Saturday — from being in position to claim at least a share of the Pac-12 title, it looks like Larry Krystkowiak might’ve been just what the Utes needed. 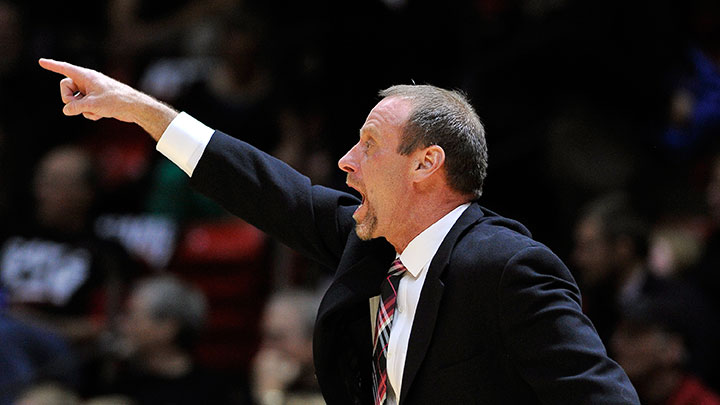 If you’re a basketball junkie who’s looking to kill time, try reading some coaching bios. Most coaches have honed their craft while playing under, working for, or coaching against some of the game’s all-time greats. And Krystkowiak’s background — which includes stints as an NBA player under Jerry Sloan, Del Harris, and Phil Jackson, along with a head-coaching gig at the game’s highest level with the Milwaukee Bucks — is one of the more unique ones in college basketball.

“It’s playing for Jerry Sloan for a year and the no-nonsense mentality. And it’s playing for Del Harris, who didn’t talk about effort much, but was a great X’s-and-O’s guy,” Krystkowiak says. “I found myself going, ‘It’s the combination of both.’ You can’t have the best plan on the planet without the effort behind it. Jerry Sloan would say, ‘Guard your f’ing guy.’ Sometimes a guy would ask, ‘What’s our pick-and-roll coverage?’ and Jerry would say, ‘Just guard your f’ing guy. If you can’t do it, you won’t be able to play.’ And it’s amazing what that mentality will do for you coupled with a lot of schemes. The thing I took from Phil Jackson the year I was there was that it didn’t matter if you were Michael Jordan or Larry Krystkowiak when you were watching film, he was breaking it down and he was coaching guys the same.”

Such a nuanced amalgam of perspective, it turns out, is a handy thing to have when looking to rebuild a broken program.

As a former player on Majerus’s teams from 1989 to 1993, Jimmy Soto, radio color guy for the team since 2008 and now an administrator for the athletic department, has seen his fair share of ups and downs when it comes to Utah basketball.

“I can’t remember how many guys left the program when we hired [Krystkowiak] in April of that first year,” Soto says. “He was pretty much scrambling trying to put a team together.”

A rash of transfers left Krystkowiak with a barren roster and a lot of unused scholarships. Combined with his late arrival, which came after the spring recruiting period, it wasn’t the ideal start for a head coach.

“The list [of challenges] was so long. Rather than getting overwhelmed with it, we just started plugging away with little stuff.” Krystkowiak says. “We had about seven or eight scholarships to figure out. So that’s where a lot of the focus went.”

In the college basketball landscape, recruiting powers culture and vice versa. While we tend to think of young athletes as malleable assets that can be molded into whatever type of player needed by their head coach, that’s far from the case. You’ll sometimes hear coaches talk about the “20 percent rule,” the general notion that a coach can only change a kid’s disposition and habits by 20 percent, no matter how great the infrastructure of the program. For Krystkowiak, the temptation to take a chance on a few talented players who didn’t quite fit surely loomed large, but he never took the bait.

“[Krystkowiak] came in to the program, a lot of players left, and everything kinda started from the bottom.” says Trevor Jameson, the team’s athletic trainer. “I think one thing he decided he really wanted to do is just build it right and bring in high-character kids that wanted to work hard.”

Still, there needs to be something, some mind-set or mold, for those players to fit into: “You can Google ‘culture’ right now and you’ll get 2 million definitions,” Krystkowiak says. “It’s always the buzzword when a new coach gets hired.”

In some programs, culture is literally defined. Gigantic handbooks act as receptacles of hundreds of rules and ideas, requiring signatures that commit players to a series of ideals. At other schools, the term is only spoken of vaguely, almost as if it’s some ethereal presence meant to hypnotize players into better behavior.

“When I got fired from the Bucks, I took a good hard look at [culture] and tried to figure out what is it exactly. It’s this term that’s out there, but what is it specifically?” Krystkowiak says. “And for us, it doesn’t involve a big user’s manual and a rulebook and stuff like that. It’s about treating people right and working your tail off.”

The approach, considering Utah’s six wins in Krystkowiak’s first season, hardly yielded immediate results. But four seasons in, with the team ranked in the top 15 of the AP poll and much higher by advanced metrics, it’s starting to pay dividends for the Utes.

“We’ve got four juniors on our team that have played an awful lot of minutes from back when they were freshmen: Brandon Taylor, Dakarai Tucker, Jordan Loveridge, and Jeremy Olsen,” Krystkowiak says. “To me, those are program builders — they help you with the culture. That was kind of the main thing: Let’s find a solid freshman class to help us build this program.” 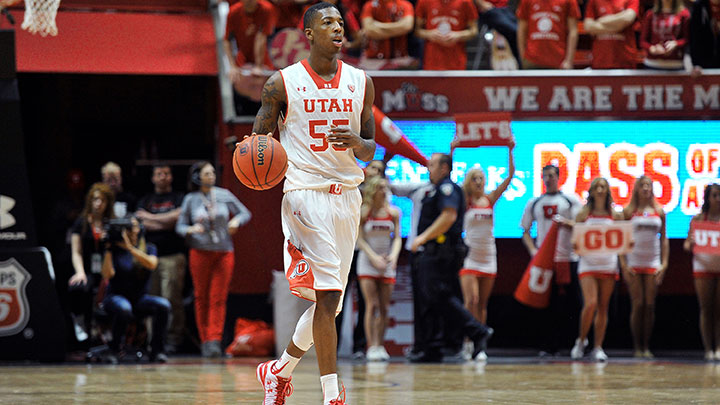 After two straight sub-.500 years to start his tenure, Krystkowiak’s patient rebuilding process got a much-needed boost from an unheralded junior college recruit named Delon Wright. The 6-foot-5 Wright, the younger brother of Dorell of the NBA’s Portland Trail Blazers, seems a perfect marriage of talent and attitude. Although Krystkowiak’s team is deep and balanced behind Wright, the senior point guard powers the engine that makes this machine hum.

“He’s just one of those guys that lifts the level of everybody,” Krystkowiak says.

Unlike most 6-foot-5 wings in the college game, Wright is more playmaker than tunnel-vision scorer. “He can take things upon himself and start getting his shots whenever he wants,” Soto says, “but he just focuses on his game, knows what his strengths are, and understands how he can help a team.”

Wright ranks 28th in the country in assist rate while also sporting an offensive rating of 125.6, good for 26th overall, per KenPom.com data. And thanks to improved shooting from the outside, Wright, who is ranked 31st on the DraftExpress prospect list, has a shot at being the first Utah player selected in the first round of the NBA draft since Bogut went first overall in 2005.

Although Wright also ranks second in KenPom’s “player of the year” metric, numbers can’t measure everything he does for the Utah program. From the “Pistol” sets made popular by the Steve Nash–Mike D’Antoni Phoenix Suns teams of the mid ’00s to classic NBA “floppy” action, Krystkowiak uses a number of plays and concepts from his NBA days. The Utes are more like an NBA minor league team than a Division I basketball program. Krystkowiak has even utilized the Spurs’ “one-second rule,” meant to deter his players from holding on to the ball by either passing, shooting, or driving once they catch it. They can run all of these sets because their star is also their most unselfish guy.

“When your best player and the guy that’s got the ball in his hands a lot of the time has that mind-set [to pass], it’s contagious,” Krystkowiak says.

As good as the Utes are on offense — and at 19th in the country, per KenPom data, they are quite good — the team’s calling card comes at the other end of the floor. After jumping from 119th to 36th a year ago, Krystkowiak’s team has leaped all the way into the top five this season. Though their scheme is rooted in traditional man-to-man principles, a big factor in their success is their defensive unpredictability. Opponents facing Utah can never be sure what to expect on a given possession.

“We’ll try to ice a side pick-and-roll [force a ball handler to the sideline] from time to time. We’re playing with impacting the ball more and working on trapping it,” Krystkowiak says, “and some of it depends on what the other team is trying to do. We try to throw some curveballs at people.”

The most confusing component for opponents is Krystkowiak’s selective use of switching. As you’re seeing more and more in the NBA, teams with the ability to effectively switch actions, particularly the pick-and-roll, are quite difficult to score on. Utah doesn’t employ the strategy without direction, but when it does, it throws opponents off.

“Pick-and-rolls are designed to get a guy an open shot, whether it’s a post rolling or a draw-and-kick after someone gets sucked in,” Krystkowiak says. “And Del used to say, ‘Mismatches [like the ones that come from switching] are not gonna beat us; open shots will.”

Come Saturday, against an Arizona offense ranked 11th in the nation in offensive efficiency, the Utes will need all they can get from Krystkowiak’s shape-shifting defense. A win over the Wildcats would certainly grab the attention of the college basketball world and firmly announce Utah’s rise back to national prominence. But the signs that Utah is back — on the court and in the arena — are already here.

“Everyone wants to talk about Utah basketball. They’re excited for the next game,” Jameson says. “It’s fun to come to Huntsman Center and have the place be packed with the crowd there. That’s how it was when I got here under Rick [Majerus]. It’s fun to see that again.”

This piece has been updated to correct both the color of Rick Majerus’s sweater and how many years Larry Krystkowiak has coached Utah.