Before this century’s best sports blog, Fire Joe Morgan, died so that this century’s best sitcom, Parks and Recreation, could be born, Joe Morgan’s mantra about modern baseball teams burned itself into every FJM reader’s mind. Exhibiting the same consistency that he prized in players, Morgan announced — in every year of the site’s existence — that there were “no great teams” anymore, and that things had “been this way for a bit.”

Morgan’s message of anti-exceptionalism clashed with the records of baseball’s best teams at the time. The Cardinals won 105 games in 2004 (and won 100 again the following season); the Yankees won more than 100 in 2002, 2003, and 2004; the Angels won 100 in 2008. Evidently, though, none of these teams met Morgan’s strict standard, which specified that a great team must have “no weaknesses.” Morgan was mocked because his nostalgia was speaking — the same impulse that prompts every generation to declare that things were better back in the day made Morgan Internet fodder. His analysis, it seemed, was clouded by biased comparisons to his beloved Big Red Machine.

In retrospect, though, maybe stick-in-the-mud Morgan was actually ahead of his time. If Joe were still saying “meh” about every baseball team in 2015,1 we wouldn’t have any reason to fisk his response, because we actually have entered an era in which little daylight penetrates through the cracks between teams. We’re now living in the world Morgan thought he saw several years ago.

Perhaps he is, in podcast form.

Last month, FanGraphs’s Jeff Sullivan collected preseason standings projections from 2005 to 2014, averaging the outputs of several systems to produce a combined projected record for each team in each year. I did the same for 2015, using four sources: PECOTA, Steamer, ZiPS, and the projections generated by Baseball Prospectus cofounder Clay Davenport. Then I added the 2015 projections to Sullivan’s data set, yielding an 11-season sample of spring expectations. As Sullivan noted, the same systems weren’t incorporated in every year, and every system’s code has been tweaked over the past decade-plus. However, most projection systems’ methods and results are similar enough — both to each other and to their own earlier incarnations — that we can safely compare projections over time, at least in some respects.

When we do, it’s immediately obvious that the projections for 2014 and 2015, taken collectively, look different from the projections for previous seasons. For one thing, the range between the best and worst projected records has never been smaller: Just as was the case last year, only 23 projected wins separate the leaders from the laggards entering this season. 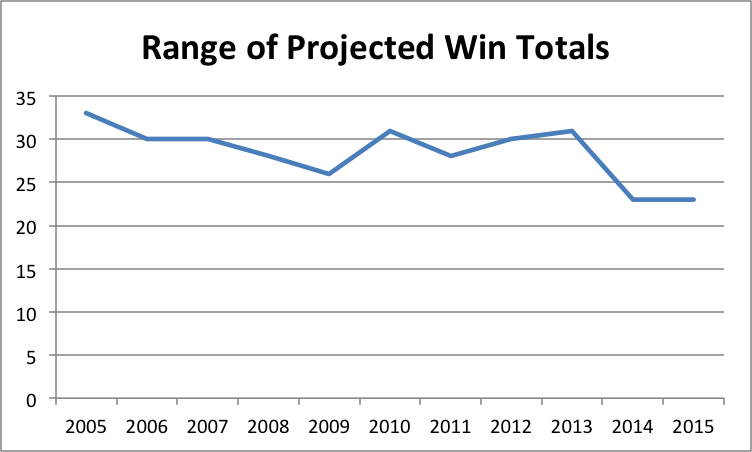 Meanwhile, the standard deviation of the projected records — a measure of how closely the records cluster around the 81-win mean — has shrunk, revealing a narrower distribution. 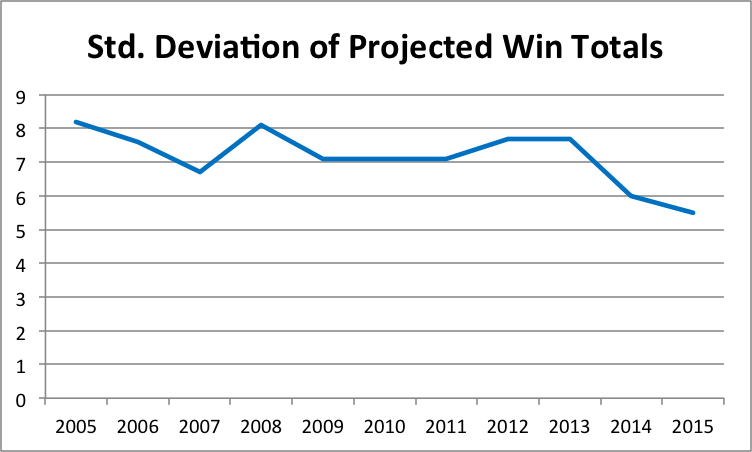 Last year was the first time since 2007 (and the second time since 2000) that no team won 100 games or lost 100 games; as Rany Jazayerli wrote on Monday, it was also the third consecutive non-strike-shortened season without a 100-game winner, a first since the institution of the 162-game schedule in the early 1960s. Expressed in standard deviation, last year’s actual records had a standard deviation of 9.6; the average regular-season standard deviation from 1998 to 2013 was 11.9, a significantly wider spread.

Projection systems tend to forecast more conservative winning percentages than we’re used to seeing in the final standings. That’s because projected win totals reflect the most common outcomes of thousands or even millions of simulations, whereas a single season, with its wild fluctuations in luck, offers ample opportunity for teams to significantly exceed or fall far short of their true talent levels.

Although the PAP system projects them to contend.

The National League boasts both of the clubs with the strongest spring claims to the 2015 “great team” title: the Nationals and the Dodgers, both of which are projected to win 93 games. The American League teams, by contrast, are a sea of uninspiring sameness, like lightly armored clones marching in formation. There’s almost no difference between AL teams in projected strength of schedule, because there’s almost no difference between AL teams. Over the last 10 years, the projected top win total in the American League has never been lower than 89 wins. This year, it’s 87. Only the 2007 National League had a leader with a more pessimistic projection; none of the league’s 16 teams that year topped 90 wins, and the Diamondbacks were fortunate to win that many.

The AL is a prognosticator’s nightmare. As Phil Birnbaum and Neil Paine have noted, there’s an absolute limit to the accuracy of baseball projections. Even if we were omniscient when it came to team talent levels, we wouldn’t be able to predict luck. And luck has large effects: As Birnbaum wrote, “On average, nine teams per season will be lucky by six wins or more.” So what do we do with a division like the AL East, where the worst team is projected to finish only six games behind the best? Even if those projections were perfect, it wouldn’t be at all unusual for the worst team to beat the best one through better luck alone. In the East, then, there’s no such thing as an upset. Meanwhile, the Central and the West are projected to have new division winners — the Indians and the Mariners, respectively — but in both cases, the projected margins of victory over last year’s winners (the Tigers and Angels) are a single game. At the moment, no AL team has even a 45 percent chance of winning its division this year. As Morgan once put it, depressingly, “Every team is mediocre and flawed.”

Save for an occasional allusion to expansion diluting the typical team’s talent level, though, Morgan rarely speculated about why there were (supposedly) no more great teams. We’re almost two decades removed from the last league expansion, so we can’t blame a recent trend on the Rays and Diamondbacks being born. In the AL, the Yankees’ absence from the projected winner’s circle suggests an obvious scapegoat. The Yankees had the AL’s best projected record five times from 2005 to 2012, and they were never projected to win fewer than 90 games in those years. Now they’re forecast for 82 wins, following their first two-season streak of missing the playoffs since the 1994 strike, and a winter in which they showed unusual financial restraint. Not only are the Yankees not spending,3 they’re also not applying the pressure that once spurred their competitors to spend.

Outside of the international and minor league free-agent markets.

Of course, the Yankees haven’t stopped spending because they’ve stopped wanting to win now that Derek Jeter is no longer around to remind them of the goal. Their uncharacteristic strategy is a response to uncharacteristic conditions. Writing in the 2015 Hardball Times Annual, Dave Cameron dubbed 2014 “The Year the Money Stood Still.” Like Sam Miller and Brian MacPherson before him, Cameron observed that with the exception of the mid-to-late 1980s, when the owners were colluding to keep salaries low, the correlation between wins and payroll hasn’t been as low as it was last season since the start of free agency. In typical years, the correlation between payroll and record has hovered between 0.4 and 0.5. Last year, Cameron found, it fell to 0.27.

Partly thanks to revenue sharing and the luxury tax — measures that former commissioner Bud Selig put in place to promote competitive balance — the high rollers aren’t outspending the second-tier teams to the degree they once did. Nor are the penny-pinchers falling as far behind. The teams at the bottom of the 2015 payroll rankings are much closer to $100 million than $0, which wasn’t true even two years ago. It’s not just the fear of financial penalties that has forced the big and small spenders toward the center of the payroll range. There’s also the impact of lucrative local TV contracts, which has enabled some teams to extend their young players instead of watching them walk, coupled with a return to pre-PED-era aging patterns, which has swung the pendulum of productivity back toward young players who can’t easily be bought. 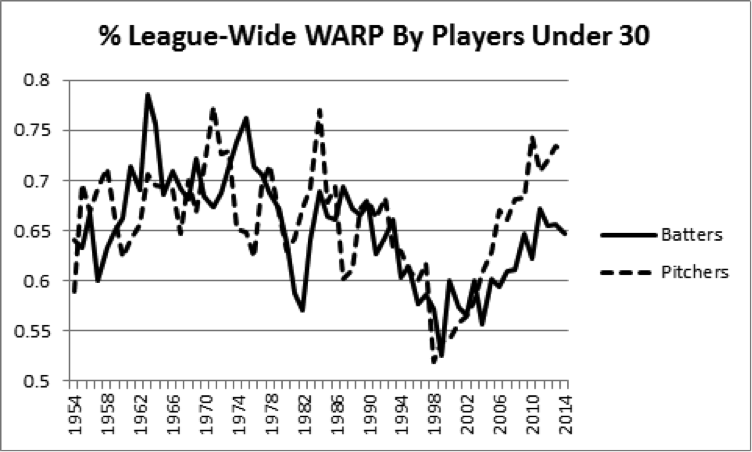 While some teams are still smarter and more efficient than others, there aren’t many (if any) teams making really dumb decisions, and the lack of easy marks for the best front offices to hustle reduces the variation between teams.

Finally, there’s the effect of the 10-team playoff format. Last August, Birnbaum wrote that in a rational market, an expanded playoff field should make bad teams more willing than before to spend on free agents, and good teams more willing to tighten their belts. “With more teams qualifying for the post-season, there’s less point making yourself into a 98-win team when a 93-win team will probably be good enough,” Birnbaum wrote. “And, even an average team has a shot at a wild card, if they get lucky, so why not spend a few bucks to raise your talent from 79 games to (say) 83 games, like maybe the Blue Jays did last year?” That’s exactly what we’ve seen. This offseason, top free agents signed with teams coming off non-playoff seasons at the highest rate in at least the last decade, breaking another high set the previous winter.

The present state of affairs isn’t immutable, and it’s possible we’ll eventually look back on 2014 and 2015 as a 2007-like blip. As soon as it sinks in that not all “postseason” spots have equal value, teams might start prioritizing division titles over coin-flip wild-card games and aiming, once again, for greatness instead of good-enough-ness. Wealthy teams might find loopholes to exploit in the next CBA. Giant TV deals might dry up.

But the way things work now isn’t necessarily a negative. What Morgan called mediocrity, we could call competition, and what Morgan called a lack of great teams, we could call a lack of teams that make their fans want to turn their TVs off in the fifth inning. From a utilitarian perspective, baseball might be better off with a more even distribution of talent that gives everyone hope, even if it means that some fans who used to fly first class have to accustom themselves to economy. Maybe we’re losing some legend-building by endangering dynasties, but that’s a worthwhile sacrifice if we’re also saving ourselves from a system in which a few teams routinely pad their win totals by beating up on noncontenders in games with no stakes.

Thanks to Jeff Sullivan for research assistance.