No matter how you look at it, fantasy football belonged to the little guy last season. Antonio Brown, all 5-foot-10 of him, destroyed the rest of the wide receiver field by nearly two full games’ worth of points. The 5-foot-11 Odell Beckham Jr. averaged 17 points in his 12 games, the most of any receiver by far. For the season, Beckham finished fifth in total points among receivers, just ahead of Randall Cobb and Emmanuel Sanders, both of whom check in just shy of 6-foot.

It's almost here. For everything you need to know about the new season, follow all of Grantland's coverage.
Expand the scope a bit further, and the ridiculousness of Brown’s 2014 campaign only grows. His 251.9 fantasy points1 were the ninth-most in a single season by any wide receiver since the merger, and five of the eight seasons ahead of him belong to Jerry Rice or Randy Moss. It was a historic showing, and even more historic when compared to the seasons a smaller wide receiver has ever had. Only one receiver shorter than 6-foot has ever come within 17 points of Brown’s total, and it took an absurd 18 touchdowns for the Dolphins’ Mark Clayton to even get close in 1984.

For the purposes of this piece, all the historic fantasy totals were calculated with the formula that’s used by Pro-Football-Reference.

Laundry-listing the Steelers receiver’s season may seem arduous, especially without the consideration of his formidable high-kick. But establishing just how singular Brown’s fantasy contributions were last year is crucial to understanding why some are worried about him — and last year’s other smaller superstars — when it comes to a fantasy replication this season. 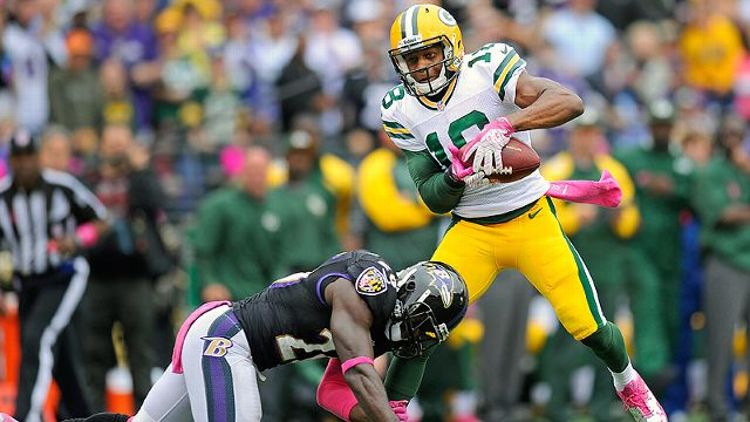 Nick Wass/AP
The guiding principle when it comes to drafting fantasy receivers mirrors the philosophy inside most NFL front offices: Bigger is better. Given the value of touchdowns, selecting a taller, more reliable red zone target has long been deemed the safe choice. Touchdown totals, so the thinking goes, tend to be all over the place for players who aren’t jump-ball monsters in the end zone.

A cursory look at the numbers seems to bear this out. Since the merger, 31 receivers shorter than 6-foot have finished multiple years with 1,000 or more receiving yards, and almost the same number — 34 — has ended at least two seasons with 70 or more catches. Analyzing touchdown totals gets dicier. Only 12 such players have multiple seasons with 10 touchdowns or more, and only a handful of players have done it more than twice.

That seems like a small number, but it makes sense when you consider that Steve Smith — a future Hall of Famer2 — had just one season with 10 touchdowns. And that was in 2005 when he won the receiving Triple Crown, leading the league in catches, yards, and scores. Part of the ping-pong-ing comes from the way in which many smaller receivers are used. Smith was always most dangerous as a long-ball threat outside the numbers, and many of the receivers who’ve compiled double-digit scores fall into that category. Terance Mathis averaged nearly 18 yards per reception when he did it for the Falcons in 1998. At 5-11, Joey Galloway wasn’t exactly short on speed — he nabbed 77 touchdowns in 16 seasons.

In my estimation, at least.

But Brown, Beckham, and Cobb are different — they’re busting up the outside burner-or-benched archetype. Although all three can fly, none of them was relegated to the type of downfield duties reserved for a player like DeSean Jackson. Each hauled in double-digit touchdowns last year, largely because their teams weren’t afraid to feed them the ball when they got to the red zone.

The league leader in red zone touchdowns last year wasn’t some behemoth tight end like Rob Gronkowski or Jimmy Graham. (OK, fine, they were tied for second.) Neither managed to beat out Cobb, who hauled in 10 touchdowns inside the 20 for the Packers. Both Brown and Beckham finished tied for seventh with eight. But the contrast among the players who finished in the top 10 is telling. It’s a group of players on different ends of the physical spectrum. Along with Cobb, Brown, and Beckham, the list also includes Gronkowski (9), Julius Thomas (9), Graham (9), Antonio Gates (9), and Dez Bryant (8). At 6-2 and 220 pounds, Bryant is the diminutive one in that second group.

Even though these mighty mice managed to equal that predictable group of sasquatches, the pro-tall crowd gets a win when we examine efficiency. With his 33 red zone targets, Brown ranked second among all receivers, and Beckham and Cobb finished tied for third with 25. Some of the smaller star receivers in football were some of the most sought after down near the goal line. Those targets weren’t nearly as fruitful, though, as the ones that went to the big boys. Brown’s eight touchdowns on 33 throws came in just below the league touchdown average of 25 percent, whereas Gronkowski and Bryant blew that number away. It took Gronk only 16 targets to get his nine touchdowns, and for his eight, Bryant needed only 14 passes.3

I’ve checked that about 10 times. It doesn’t even seem real. That man is not human.

Excluding the tight ends, it’s still a clear victory for the heightists. Mike Evans had six scores on just 12 targets, Jordan Matthews needed only 15 to get six, and Roddy White got his half-dozen on 14 throws. 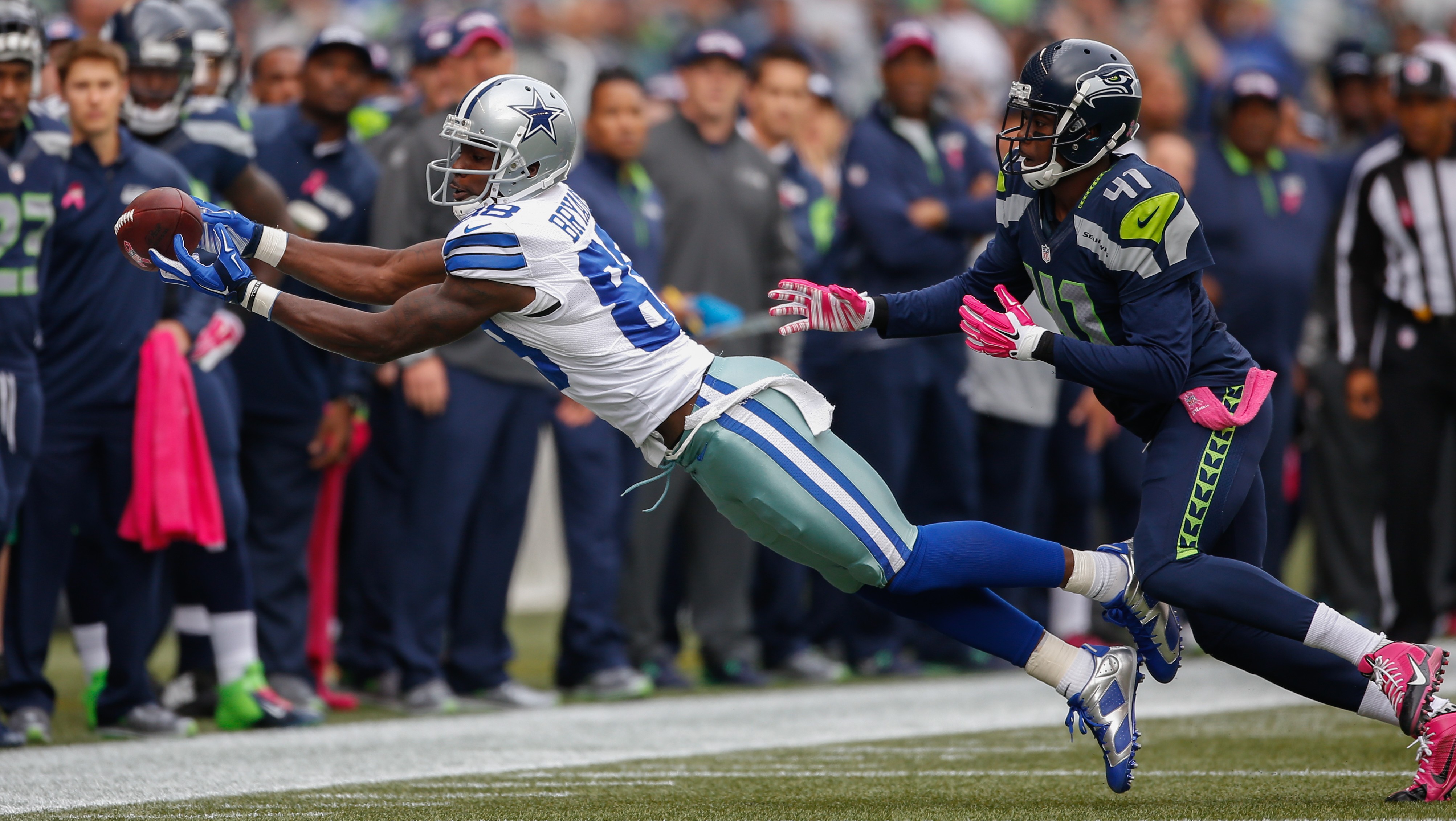 Otto Greule Jr./Getty Images
Tall players are typically going to make more out of their targets in the red zone,4 and to get the same sort of touchdown totals, shorter receivers are going to need way more opportunities. Both Brown and Beckham got those opportunities last year at a clip unmatched by any other receiver in the league. From Beckham’s first game through the end of the season, he and Brown ranked third and second, respectively, in total targets.

There are exceptions — Demaryius Thomas and Andre Johnson were both notably inefficient on red zone throws.

Just behind them, with six fewer targets than Beckham, was Julio Jones, who presents a solid counterpoint to the idea that bigger receivers are somehow more reliable. Over that stretch, Jones pulled in just three touchdown catches on his 122 targets, and his red zone efficiency for the entire season — two scores on 11 targets — was actually below the league average. DeAndre Hopkins, another breakout fantasy star from last year, also managed just two touchdowns on 12 targets inside the 20. The point here is that outside of the best red zone targets in football, touchdowns tend to be unpredictable. Even Calvin Johnson had just five during a 2012 season in which he totaled 122 receptions.

Replicating fantasy success for smaller receivers tends to be difficult, but that’s in part because replicating fantasy success for any receiver is difficult. With the tumult at running back in recent years, building a fantasy team around wide receivers has been billed as the safer bet — but in league history, the number of pass-catchers who’ve been truly reliable fantasy stars is surprisingly small.

Only 97 times since the merger has a receiver finished a season with more than 200 fantasy points, a bar that Brown, Beckham, Cobb, and Sanders all cleared last season. And that list is filled with one-year wonders who never turned into consistent fantasy producers. It’s happened nearly 100 times, but only 17 players have done it more than once. Of the 97 seasons, more than a quarter of them belong to Rice, Terrell Owens, Moss, and Marvin Harrison. The lack of consistency in this regard actually makes what Bryant’s done even more remarkable. Only seven players in league history — including the four players above, plus Calvin Johnson and Sterling Sharpe — own at least three of those 97 seasons, and Bryant is one of them.

This lack of reliability is why anyone who’s keeping or looking to overpay for Antonio Brown or Odell Beckham should breathe a little easier. Yes, there’s a good chance neither manages to hit his touchdown total from a season ago, but that’s true for almost any receiver who’s ever played. Outside of Bryant and maybe Megatron, the truly safe bets at wide receiver aren’t easy to find. For smaller receivers, fantasy greatness is always going to be more dependent on workload than it is for a red zone beast. But that’s the nice part about fantasy football — raw totals are all that matters. And given what they showed last season, both the Steelers and Giants are better off throwing to their stars as often as possible. Last year may have been the year of the undersize wide receiver, but in 2015 there’s reason to believe the NFL might be getting small all over again.