From the Fearsome Foursome and Purple People Eaters to the Steel Curtain and Orange Crush, historically great NFL defenses earn some great nicknames. With two consecutive Super Bowl appearances under defensive coordinator Dan Quinn, Seattle’s secondary certainly deserves its “Legion of Boom” moniker. But with Quinn now the Falcons head coach, he’s tasked with fixing an anonymous defense. Let’s call it the “Legion of Whom?”

It's almost here. For everything you need to know about the new season, follow all of Grantland's coverage.
Quinn has left the boldest defense in the league to fix the blandest. Despite DeAngelo Hall’s best efforts, Atlanta hasn’t had a flamboyant defensive superstar since Deion Sanders was high-stepping it in one of those garish red helmets. Instead, the team’s star players have all been lunch-pail types like Jessie Tuggle, Keith Brooking, and John Abraham, but even those have recently been in short supply. When the Falcons defense has been statistically solid, it has still offered almost no defining features.1

Honestly, have the Falcons had a more compelling defensive performance since thwarting the high-flying Vikings in the 1998 NFC Championship Game?

Last season, Atlanta simply couldn’t touch the quarterback, finishing with only 22 sacks — a total equaled by Kansas City’s Justin Houston. While the franchise has landed in the bottom quarter of the NFL for sacks per dropback in each of the past six seasons, a strong Matt Ryan–led passing attack helped the Falcons overcome that weakness en route to three playoff appearances. Over the past two seasons, though, a total defensive collapse (no. 29 in defensive DVOA in 2013 and last in 2014) led to consecutive losing records and head coach Mike Smith’s dismissal.

In his place comes Quinn, who faces an intriguing challenge: Can he smoothly overlay the Seahawks’ scheme onto the Falcons’ roster, turning unheralded players into stars? Or are the likes of Earl Thomas, Richard Sherman, Bobby Wagner, and Michael Bennett the real reason Seattle has been so stingy? Atlanta fans certainly hope the former is true, and there is some historical precedent in their favor. Consider the Buccaneers of the late 1990s, who already had early-round draft picks Warren Sapp, Derrick Brooks, and John Lynch on the roster when head coach Tony Dungy and defensive coordinator Monte Kiffin arrived. Those talented players didn’t become a league-wrecking force, however, until Dungy introduced what we now know as the Tampa 2, the zone-based defense he concocted while making three playoff appearances as Minnesota’s defensive coordinator.2

The Tampa 2 was then successfully replicated by playoff teams like the Bears and Colts, but its popularity has faded because of the rise of the spread offense, which is particularly well suited to exposing the weaknesses between the defensive zones.

Even if Quinn doesn’t have the same level of defensive talent he did in Seattle, there are pieces to work with in Atlanta: underappreciated cornerback Desmond Trufant, who plays like Superman but blends into the NFL landscape like Clark Kent; speedy rookie defensive end Vic Beasley, the build-your-own-pass-rush kit selected no. 8 overall; young prospects like defensive tackle Ra’Shede Hageman and cornerbacks Jalen Collins and Robert Alford; and free-agent veterans like defensive linemen Adrian Clayborn and O’Brien Schofield, who were imported specifically to fill roles in the new scheme.

Schofield spent the last two seasons as a backup with the Seahawks, and it’s not uncommon for coaches to recruit their former players (see: Kelly, Chip) in hopes that familiarity with a system will hasten improvement.3 But that alone is no guarantee of repeating Seattle’s success. When Gus Bradley, Quinn’s predecessor in Seattle, became the head coach of the Jaguars in 2013, he brought along former Seahawks defensive linemen Chris Clemons and Red Bryant. Jacksonville still finished 2-14 and 3-13 with a below-average defensive DVOA in Bradley’s first two seasons.

Bruce Irvin, unhappy after not receiving a fifth-year option from Seattle, has said he will join Atlanta after this season.

Atlanta could face similar stagnation if it doesn’t improve its weakest defensive units. At linebacker, the Falcons might simply be playing a shell game with replacement-level players, pushing aside Curtis Lofton and Sean Weatherspoon for Brooks Reed and Justin Durant. The team’s safeties are suspect, and one very conspicuous absence is Pete Carroll, the cornerback whisperer who has created a dominant secondary in Seattle without spending high draft picks outside of Thomas. 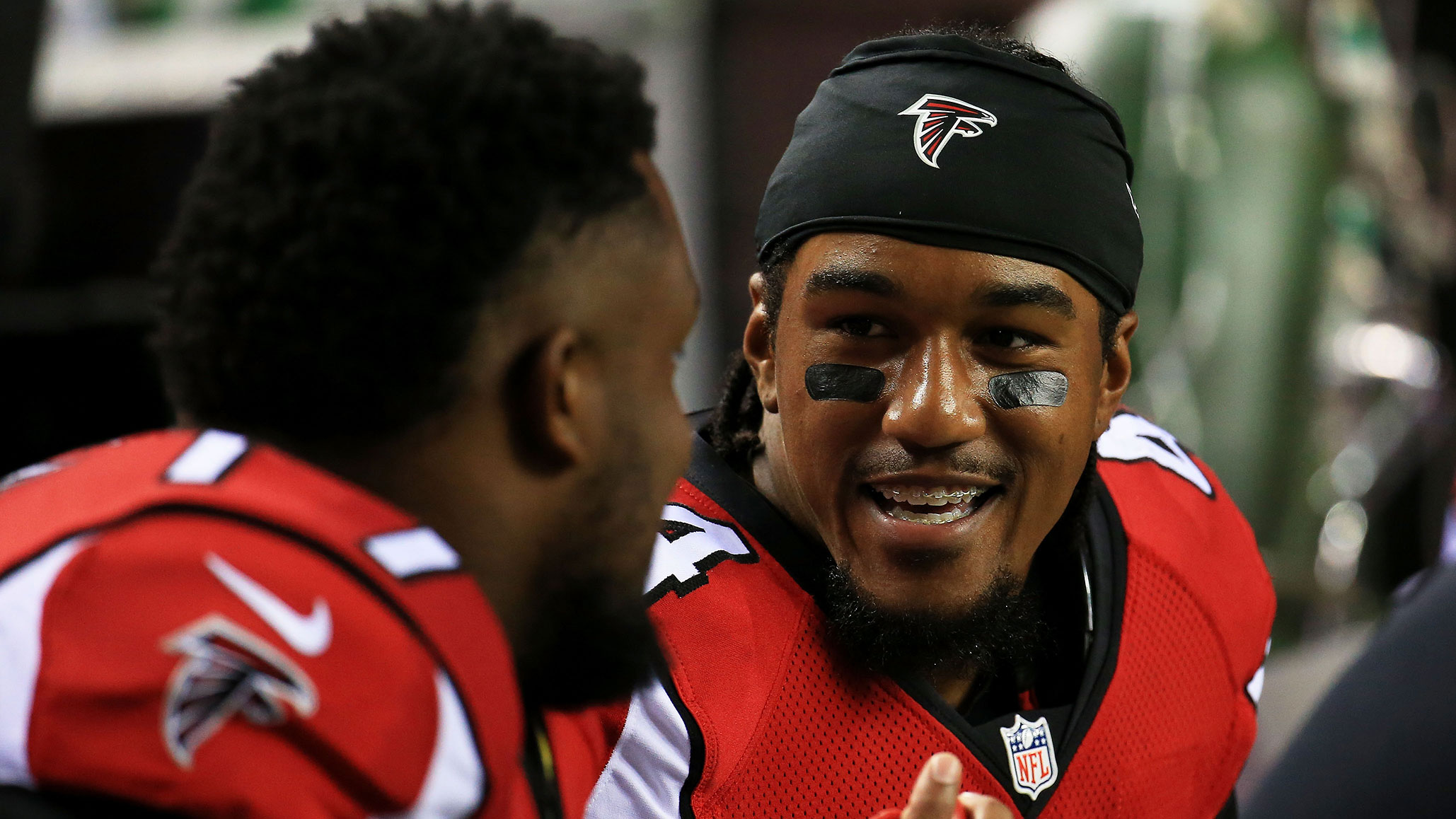 In Quinn’s favor, however, is a revitalized defensive line that can serve as the foundation for the straightforward and aggressive 4-3 defense he’s installed.4 That isn’t just a preseason platitude; not having complex plays allows defenders to play instinctively. In last season’s two-gap system, defensive linemen had to engage the offensive line before reacting to which way the play was going. The current one-gap system allows them to immediately charge toward the ball in hopes of creating big plays.5

Of course, there are downsides, as was made clear on Chris Ivory’s 33-yard touchdown run last week. When Falcons rookie defensive tackles Grady Jarrett and Eric Lefeld shot left at the snap, the Jets starters used that momentum to create a massive hole at the line of scrimmage.

With Quinn’s simplified system, the most distinctive role is the Leo, an undersize defensive end/linebacker hybrid who rushes from the weak side, and it looks like Atlanta nabbed a good one in the draft. Nobody, not even a dominant college player, is a sure thing when transitioning to the NFL,6 but Beasley boasts both on-field production (33 career sacks at Clemson) and impressive combine measurables. Even more importantly, he has looked the part in preseason action.

Jacksonville used the no. 3 pick to select Dante Fowler for its Leo role, but he will miss the season after tearing his ACL on the first day of rookie minicamp.

Although the final scores of preseason games are meaningless, there is value in observing what happens when both starting lineups are on the field. Atlanta has been able to create pressure with four-man rushes, a sight for sore eyes after years of watching patty-cake up front. And while it’s hard to decide whether to assign credit to a revived Falcons defense or blame to quarterback Marcus Mariota, the no. 2 overall pick playing in his first NFL game, it can’t be bad for Atlanta that the defense recorded an interception and fumble on Tennessee’s first two possessions. Against the Jets, the Falcons continued the onslaught, allowing only one touchdown in six drives across from veteran signal-caller Ryan Fitzpatrick.

In Quinn’s system, there are essentially two defensive lines used for different situations. The beefy front (for Atlanta, this includes Paul Soliai and Tyson Jackson, last season’s free-agent acquisitions) tries to stop the run on first and second down while the Leo attacks the quarterback in what is essentially a 3-4 alignment. Success in those situations creates long third downs, letting four agile pass-rushers take the field in the nickel package — the exact type of lineup Seattle used to flummox Denver in Super Bowl XLVIII.

It’s the passer-pressuring iteration of the defensive line that has produced optimism about the Falcons’ chances this season, especially if Beasley and Clayborn continue to line up next to each other and go for broke. Against the Jets, Beasley caused havoc on third downs by (1) planting his hand into offensive tackle D’Brickashaw Ferguson’s chest and bull-rushing his way to Fitzpatrick, who stepped into a Clayborn sack; (2) using an inside spin move against Ferguson, knocking down Fitzpatrick after forcing him to rush an incomplete pass; and (3) knocking down a pass after executing a perfect looping stunt with Clayborn.

Although Beasley is the sexy addition to the lineup, don’t discount the arrival of Clayborn, who missed almost two full seasons with the Buccaneers because of injuries but looks to still have the explosiveness that made him a first-round draft pick in 2011. There is also promise of a breakout from Hageman, last year’s second-round pick, who played minimally in his rookie season; he has pass-rushing ability from the inside and is expected to start at the 3-technique, ahead of veteran Jonathan Babineaux.

With Todd Bowles and Jim Tomsula dealing with mutinies and exoduses this offseason, Quinn might have the easiest route to the playoffs for a first-time head coach. Let’s not forget: Even though the Falcons finished 6-10 last season, they were playing for the NFC South title in Week 17. They still have weapons on offense — consistent Matt Ryan, elite Julio Jones, and promising young running backs Devonta Freeman and Tevin Coleman — and could return to the postseason with even a modicum of defensive improvement. For that to happen, Quinn won’t rely on the kind of shutdown secondary he had in Seattle. If Beasley & Co. can meet their potential and forge Atlanta’s new identity in the trenches, his defense will be getting plenty of boom up front.