The Sliders: Pretty Much Everyone

There was a lot of carnage this weekend, and the Heisman leaders were not immune. Take Kenny Hill, who looked mortal against Mississippi State, finishing the blowout loss with three interceptions, 5.9 yards per attempt, and a 28.6 QBR. (For the less mathematically inclined, those are highly undesirable numbers.) Noted Johnny Football associate Steven Brant attributed the poor outing to Hill’s failure to reply to his text, and we’re in no position to rule out that theory.

Fellow SEC passer Blake Sims is no longer a legitimate contender after throwing a game-deciding interception versus Ole Miss, and it’ll now be doubly hard for Sims’s teammate Amari Cooper to attract his share of consideration. (At least Leonard Fournette averaged a ROBUST 4.2 yards per carry at Auburn, am I right?)

Things weren’t much better in the Pac-12, where Oregon’s shocking loss to Arizona put a dent in Marcus Mariota’s campaign and UCLA’s abhorrent offensive line did potentially irreparable damage to Brett Hundley’s chances.

Not all Heisman candidates were consumed by the poll-ravaging vortex that was Week 6, as Dak Prescott and Nick Marshall had no trouble dispatching their respective SEC West foes on Saturday. Prescott bested Texas A&M with a controlled, efficient passing attack (his 26 attempts tied a season high) and 23 bulldozing carries, while Marshall dominated LSU using pretty much the same formula.

Indubitably, their looming showdown will go a long way in sorting out the Heisman race. Whoever wins on Saturday will rank atop the SEC West’s quarterback hierarchy for at least one whole week, and it’s always helpful to own the head-to-head edge over a close competitor. Marshall may be surrounded by greater talent, but that makes Prescott’s success all the more impressive. Of course, Bo Wallace could render this discussion moot with victories over both of them, which is something I pray for on a daily basis.

Everett Golson’s past two games highlight the importance of competition in the Heisman race. Last week, we downgraded him for throwing two interceptions against Syracuse despite his otherwise impeccable performance, because the Orange aren’t exactly a paragon of defensive excellence. After Saturday’s showing against Stanford, however, Golson’s stock is going up like the club on a Tuesday. Though he completed fewer than half his passes for a paltry 5.6 yards per attempt, he staged a game-winning drive against the top defense in the FBS, which culminated in a potential Heisman moment:

Consequently, the Irish remain undefeated, and barring a loss to 17-point underdog North Carolina, Golson will travel to Tallahassee in Week 8 with the opportunity to cement his status. Knowing the Fighting Irish’s history, they’d probably follow a victory over no. 1 Florida State with an inexplicable loss to Navy, but we’ll cross that bridge if and when we get there.

ICYMI, Jaelen Strong took part in the least-contested Hail Mary of all time on Saturday:

You may be wondering why USC’s secondary opted against playing defense on the game’s final snap, but it starts to make sense once you look at the box score. Before that touchdown, Strong had already caught nine passes for 156 yards and two scores, so the Trojans obviously knew they couldn’t keep him out of the end zone. And to be fair, they were right. Strong has been a beast this season, and his presence significantly increased the odds of the Hail Mary’s success. Better to be realistic and correct than idealistic and wrong!

Back in the halcyon days before Chuckie Keeton reinjured his surgically repaired left knee, Utah State–BYU figured to showcase the country’s premier dark-horse Heisman candidates. While that scenario didn’t quite pan out thanks to Keeton’s likely season-ending injury, Friday’s game was still a chance for a prime-time helping of Taysom Hill, whose dizzying athleticism and much-improved accuracy had led the Cougars to a 4-0 start. A playoff spot wasn’t totally out of the question, and the 24-year-old junior was garnering comparisons to Tim Tebow and loads of Heisman buzz. If Northern Illinois dual-threat QB Jordan Lynch could finish third in the voting last year, Hill could certainly make a run. 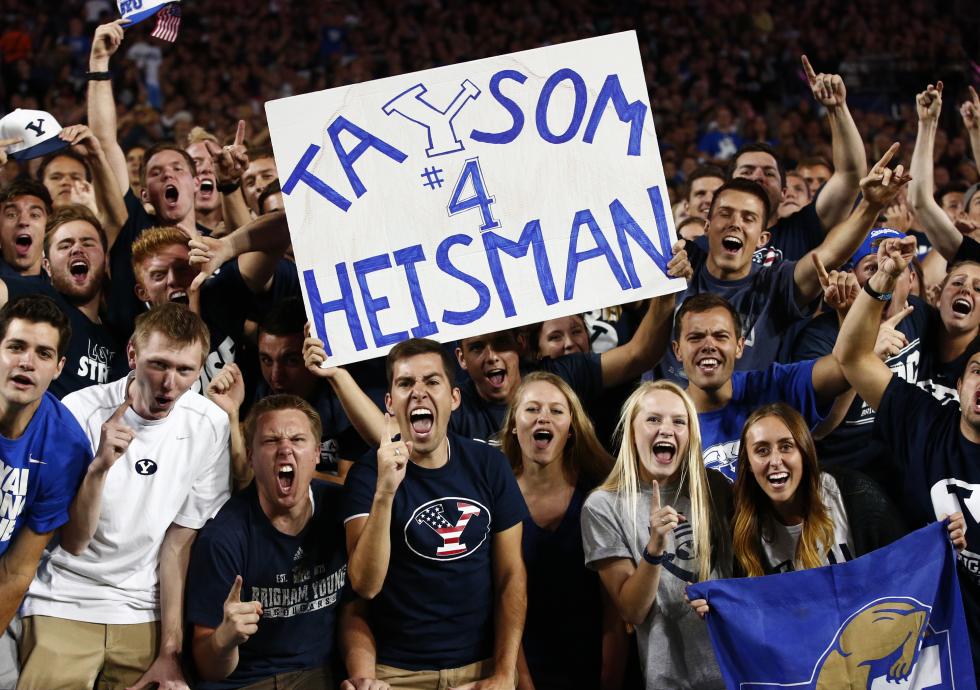 Hill got off to a strong start, tallying two touchdowns and 131 total yards before the end of the first half. Then, on a routine option play, he was tackled awkwardly by safety Brian Suite, resulting in a fractured left leg and a comatose Heisman campaign. BYU coach Bronco Mendenhall, who has a future recapping injuries on Yelp, did not mince words: “One plate, eight screws. Every major ligament shredded.”

If we’re lucky, we’ll get to experience the splendor of another Hill Heisman campaign next year. Of course, we harbored similar anticipation for Keeton’s return following his aborted 2013 campaign, and look where that got us. The inevitable heartbreak of rooting for players whose style makes them particularly susceptible to injury is almost too much to bear.

As if his 163 yards and two touchdowns on the ground weren’t impressive enough, Todd Gurley completed a gorgeous, 50-yard pass to tight end Jeb Blazevich in the second quarter of Georgia’s 44-17 rout over Vanderbilt, proving once and for all that he’s the left-handed Matthew Stafford.

Gurley’s QBR is a perfect 100.0, putting Jameis Winston, Mariota, and basically every full-time passer in the country to shame. No word yet on whether he’s meeting with George Whitfield to refine his technique.