The Upper Hand is where we pit unsuspecting entertainers against one another to determine who currently has a greater grip on the hearts and minds of America. It’s a long way of saying X > Y. It may seem reductive, or even unnecessarily competitive, to put our gentle creators into a squared circle, but it’s a useful exercise in seeing who is doing things right, who is doing things wrong, who is doing things differently, and, of course, who is winning. At the end, a guest judge will hand down a verdict. Today’s combatants are Amos Barshad, taking up arms for Rose Byrne, and Steven Hyden, riding for Emily Blunt. Judging will be Juliet Litman.

Byrne: Star Wars: Episode II – Attack of the Clones (which Rose Byrne apparently was in, and which was not counted in her box office total)

Blunt: SALMON FISHING IN THE YEMEN

Amos Barshad: The Upper Hand is a Thunderdome. I know that. One must fight for one’s cause until one’s heart gives. But I gotta keep it [100 emoji] with my heart, too: These days, when it comes to getting yourself a taste of Byrne or a drag of Blunt (OH I SEE WHAT I DID THERE), you can’t go wrong. At their respective unadvanced ages (Byrne’s 35, Blunt just 32), they’ve accomplished a prodigious rate of high-quality production.

Both are impossibly beautiful women from the U.K. and/or its former colonies: Byrne’s from Oz, Blunt — the dawwtah of a well-known barrister — is from London Town. Both move effortlessly through genres and both flash remarkable comedic range; both commit, fully. Both take jobs from HARDWORKING REAL AMERICANS, but both get to keep their accents sometimes, too. And both use their looks not as a crutch but as a goddamn Hattori Hanzo: They catch you looking, they catch you off guard, and then they disembowel you with some shit you never saw coming.

All that said: Rose Byrne is a true chameleon, and seems, at times, thrillingly, actually insane. I’m riding with Rose. 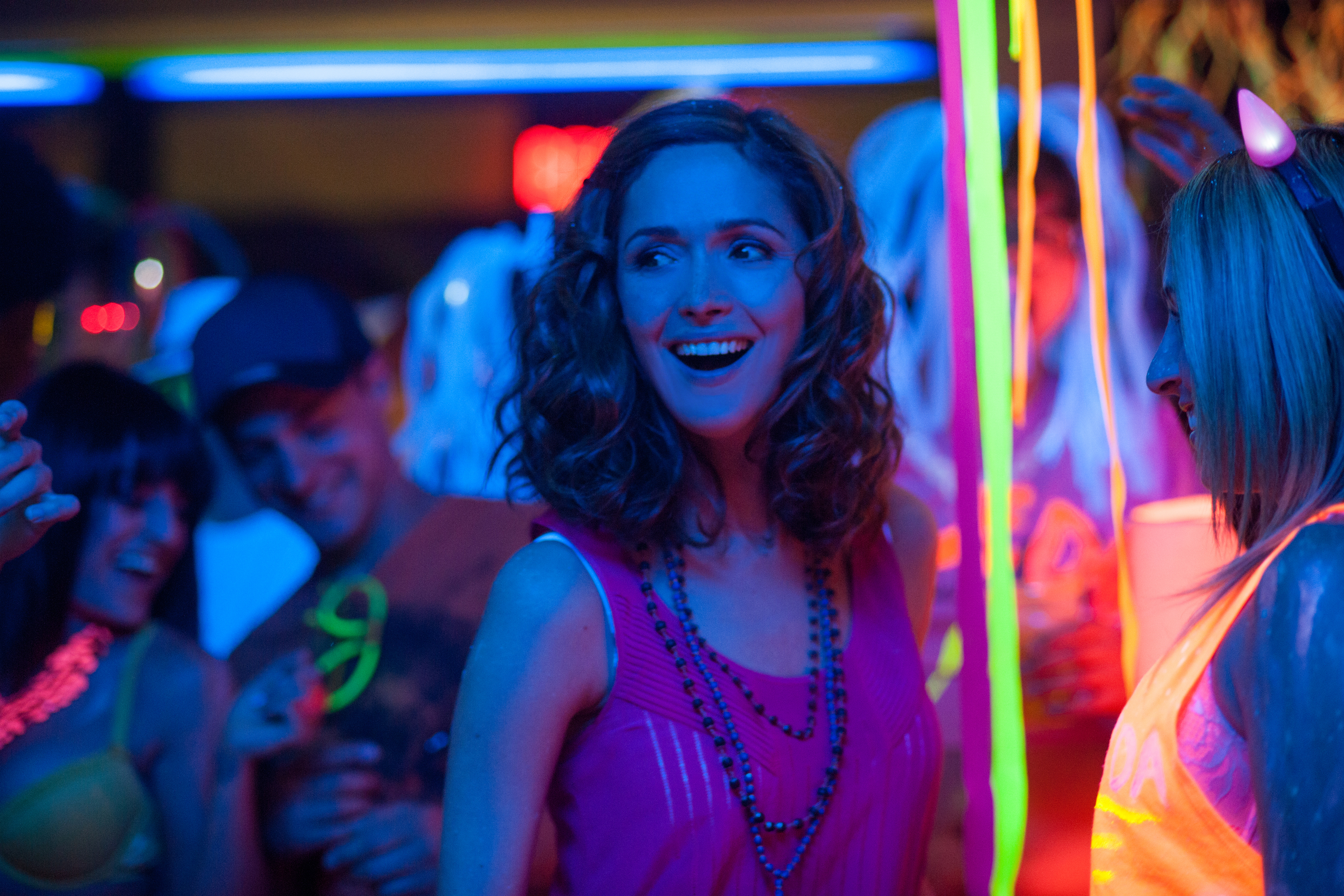 Steven Hyden: I’m with you on entering this death match with a heavy heart. I’ve got mad love for Byrne. She was authentically nervy in Bridesmaids. She maintained gravitas while walking around in lingerie in X-Men: First Class. She kept it together while perpetually on the verge of a nervous breakdown in Neighbors.

But this is war, and if I’m riding into battle, I’m gonna be Tom Cruise in Edge of Tomorrow. I’m gonna go with … Blunt force. (Let’s promise to stop using Blunt-related puns from here on out.)

If I wanted to end this quickly, I would do a side-by-side comparison of Byrne’s best vs. Blunt’s best: Looper vs. First Class, The Devil Wears Prada vs. Bridesmaids, etc. But I’m going to toy with you for a bit before delivering my kill shot. Let’s look at this scene from a thoroughly mediocre Blunt film, The Adjustment Bureau.

This scene is so good it warrants an FTC investigation. It’s just egregiously false advertising. If you stumble upon it while flipping channels on cable, this scene will convince you that The Adjustment Bureau is a far looser, sexier, and altogether more engaging movie than it really is. And you’ll wind up hanging around for an hour until you realize that the movie peaks early with Damon and Blunt flirting in the bathroom. Perhaps Richard Linklater could be talked into directing The Adjustment Bureau 2 and making it strictly about those two characters talking in front of a row of toilet stalls. I would watch that movie.

You call Byrne a chameleon, but does she have the chops or the charisma to pull off a scene like that? I have my doubts.

Barshad: I’m in shock right now. You led with a clip from the movie with the magic hats?! And it was totally convincing?!!

I love this kind of thing: the random scene that pops off the screen; the three and a half minutes that are — considering the movies they’re trapped in —  way better than they have any right to be. A dude like Ben Mendelsohn gets to do this type of shit all the time: drop in and louche it up and win the day from the far more famous person he’s on camera with.

And for his work, Mendelsohn enjoys a kind of cultish appreciation (well, at least from a few besotted employees of Grantland dot com). Do Byrne and Blunt get the credit they deserve for pulling off similar tricks? And if not (and sorry if I’m harping on this), could it have to do with their looks and gender?

OK, now let’s get back to Rose.

Bridesmaids was peak Kristen Wiig, but it doesn’t work for a second without Byrne’s pulled-taut-to-the-breaking-point, subtly-insane-aristocrat act. “I’d like to take this opportunity to honor Lil and Doug with a short poem I penned while sitting on a swing in an exclusive resort in Telethiniki.”

Then check her out in Neighbors. That she refused to play the shrew, wet-blanketing her lovably wacky husband’s gee-whiz antics, was important enough. That she went full loosey-goosey nutbag made it all-time. She lost total control.

PS: Telethiniki is, as far as I can tell, not actually a real place.

Hyden: Yeah, those scenes are nice. Totally, totally nice. But c’mon, you spent half of your Byrne defense talking about another actor. There’s not much to parse with Byrne. As you’ve defined it, her range is “shrew archetype” and “playing against shrew archetype.” She’s really good in that lane, but it’s not exactly broad, is it?

Blunt, meanwhile, can liven up the so-called “magic hats” movie with movie-star charisma, she can defer to Anne Hathaway as a supporting comic foil in The Devil Wears Prada, or (in the movies you mentioned) she can establish herself as a legit action star. There aren’t three other actors right now that I’d rather see hold a shotgun.

In Edge of Tomorrow, Blunt perfected the hard-nosed badass routine previously perfected by Sigourney Weaver and Linda Hamilton. Only now I want to see her explore that side to her persona in other films, perhaps a Jason Bourne–like franchise in which she kicks and shoots her way around the globe while uncovering international conspiracies.

That’s the kind of movie star Blunt is. You look forward to seeing her in anything she does, and you can also imagine other kinds of films she’d be great in. I don’t have that with Byrne. She seems like an element you add as your third or fourth piece, but never as the showcase.

I assume you feel differently.

Barshad: I see your point and I counter with this — aforementioned Blunt shotgun to your head, who’s winning an Oscar first?

To date, neither has been a serious award threat. Blunt got a deserved Golden Globe nod for 2007’s Prada and another from 2013 for — oh wow, oh wow, oh wow — SALMON FISHING IN THE YEMEN.  (Presumably, Blunt was recognized for the underloved Salmon Fishing by illegally currying favor with the HFPA,  à la Cher and Pia Zadora? This is all speculation, of course, but one assumes she took them out to a decadent sushi lunch? We can’t prove it, of course, but just in case, we should go ahead and dock her some points here for poor moral character.)

Byrne, meanwhile, probably came closest with Bridesmaids, which is to say not particularly close. But if we’re just talking theoreticals and raw potential, then I say this — if Blunt should have her own shoot-’em-up franchise, then Byrne should have her own Oscar vehicle. She can cry, she can laugh, she can fight, she can love, she can exude sterile patrician civility. She’s exactly what the Academy likes; she’s a high-brow chameleon. She’s one role away! All things being even, I’m betting Byrne gets to give that weepy speech first.

While I have you, another important note: Emily Blunt is married to po-faced child prince John Krasinski. Rose Byrne is dating lovable psychopath Bobby Cannavale. I THINK I KNOW WHAT COUPLE I’M DOUBLE-DATING WITH.

Hyden: This Oscar scenario is interesting, though I suspect you’ve approached it wrong. While I agree that hanging out with Bobby Cannavale would be preferable to having dinner with junior men’s model John Krasinski, Krasinski-Blunt is the stronger power couple. Krasinski is tight with Damon and George Clooney, which means Blunt is also tight with some of the most powerful actors in Hollywood.

Therefore, I would expect Blunt to have more opportunities to star in Oscar bait moving forward. I mean, if she got a Golden Globes nomination for Salmon Fishing in the Yemen (sorry, I mean SALMON FISHING IN THE YEMEN), there’s clearly a groundswell out there to give Blunt an award for something. It’s only a matter of time before someone pitches her that big, fat Erin Brockovich role down the middle that Blunt can crush directly into the stands.

I’m not saying Byrne won’t get an Oscar, but I would put my money on Blunt to do it first. Setting aside all of the bullshit power broker stuff, I think there’s a sense out there that Blunt is a really good actress who just needs the right combination of projects to be a great movie star. Whereas with Byrne, I think the equation stops at “really good actress.”

Barshad: I’m glad we talked it out, Steven. I’m glad we found something we agreed on. Now let’s go get dirt bikes and do jumps in the weirdly dilapidated dirt bike track that I assume exists outside Bobby Cannavale’s home.

Guest judge Juliet Litman: Up front, I’d like to admit that Neighbors was my favorite movie of 2014, rendering me predisposed to support Rose Byrne. The two crucial points here are who will win an Oscar first and who has more range. While my girl Rose has nailed her comedic performances in the Apatow landscape, are we sure she can do more? No one saw Annie, so we still don’t know. Blunt, on the other hand, has proven herself in all the ways you’ve mentioned and in one you have not: her performance in Into the Woods. Even if you’re not a musical theater head, she was the undeniable charmer in a movie that Anna Kendrick should have owned. She’s covering all of her bases, hoping someone notices and offers that Erin Brockovich–esque role. If we’re looking forward, the future flickers like a blunt. An Emily Blunt.