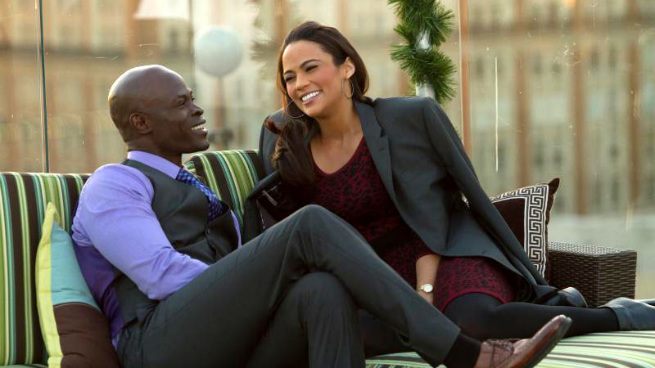 In good movies like Mission: Impossible — Ghost Protocol (shut up, it is!) and so-so ones like Just Wright, Paula Patton is usually the best thing and almost always the most attractive performer. In Baggage Claim, she’s surrounded by the gorgeous winners of major acting awards. You may have to watch it through a hole in a paper plate.

The film stars Patton as Montana Moore, a (stunningly beautiful) flight attendant who is, implausibly, unlucky in love. When she learns that her younger sister is engaged, determined not to be single at the wedding, she sets herself a deadline: She will have to be married in 30 days. But how?! Simple: She’s going to stalk her exes and “coincidentally” run into them when she happens to be working on their flights, to see if she can spark things back up with any of them.

And who are the prospects? A who’s who of hot men: Boris Kodjoe, Derek Luke, Taye Diggs, Djimon Hounsou, and Trey Songz, among others. They’re all so good-looking that it won’t be obvious which one of them she’s supposed to end up with! Talk about a suspense thriller! (Just kidding, of course it’s a rom-com.)

Wesley Morris: “Patton is best at contagious bliss. She might be the best at it. When she smiles, you smile. You want her to have what she wants even when how she wants it is stupid.”

Romeo and Juliet, one of Shakespeare’s most beloved plays, has inspired similarly beloved film adaptations, including Franco Zeffirelli’s from the ’60s and Baz Luhrmann’s daring ’90s version. This one may not stand the test of time.

Like Zeffirelli’s film, Carlos Carlei’s new version is set in Renaissance Verona. Unlike either of those other guys, though, he decided to throw out the dialogue by that hack Shakespeare and use a script by Julian “Downton Abbey” Fellowes instead. Bold! Anyway, Hailee Steinfeld from True Grit is Juliet.

Wesley Morris: “To do this movie now, you need either the eroticism of the Franco Zeffirelli movie version from 1968 or the mental illness and mania of Baz Luhrmann’s 1996 adaptation. Fellowes’s movie cannily emphasizes the Capulet family’s need for Juliet to marry well. But Victorianizing the material also deadens it.”

You may have already heard about Cheap Thrills after it was the first sale at SXSW 2013. Perhaps you’ve heard the cast talking it up on the podcast Doug Loves Movies. Now you can finally see what the hype is about before it’s in theaters.

Compliance star Pat Healy and That Thing You Do!’s Ethan Embry play a couple of shiftless losers who fall in with a couple (David Koechner and Sara Paxton) who pay them to do odd jobs. But, as is always the case with rich weirdos, the jobs keep getting odder.

American Horror Story may have wrapped up for the season, but the adventures of Madison and Frankenkyle continue in Adult World!

Also in theaters, Adult World stars Emma Roberts as a recent college graduate and aspiring poet who, like all beautiful young women, ends up working at an adult bookstore instead of hostessing at a fancy restaurant or, you know, modeling. John Cusack plays the poet she idolizes. And Evan Peters is also around, presumably not made up of the sewn-together parts of other dudes.

If movies are to be believed, there’s nothing more shameful than attending a wedding by yourself! It’s not just Baggage Claim, up top: In The Wedding Date, the “heroine” decides to forestall questions about her love life by hiring a male escort to pose as her boyfriend. And in Barefoot, which you can rent the same day as its theatrical release, a dude attends a family wedding with what is surely the prettiest resident at a mental hospital.

Scott Speedman is the guy who hatches this brilliant plan; much-younger Evan Rachel Wood is the psychiatric patient who gets the fun of joining him on this adventure and drinking champagne for the first time. And while similar movies like Mad Love and crazy/beautiful show that dating an actually mentally ill girl is totally fun UNTIL IT’S NOT, the Barefoot trailer seems to suggest that it’s just fun the whole way through. Daring take.

How many possibly great movies have been doomed by dumb titles? And is Date And Switch better or worse than the film’s original title, Gay Dude?

Not having seen it (it’s coming out the same day as its theatrical release), I have complex feelings about it. The premise — friends make a pact to lose their virginities before prom — is so hackneyed that it’s already been spoofed on The Birthday Boys. That one of the guys tells the other he’s gay, however, freshens it up. Then there’s the fact that it’s written by Parks & Recreation producer Alan Yang, and co-stars Nick Offerman and Megan Mullally, so maybe it’s good? If nothing else, it will give you a chance to clap eyes on Dakota Johnson before Fifty Shades of Grey.