As a genre, these young-adult dystopian adventure movies are starting to collapse on themselves. Or maybe they’re collapsing on me. Or I’m collapsing on them! I think I have a touch of apocalepsy — excessive sleepiness caused by prolonged exposure to three- and four-part series in which adolescents rebel against oppressive governments represented by esteemed actors.

It doesn’t matter that James Dashner’s books were published before Suzanne Collins’s. This movie exists because The Hunger Games movies do. By now, it really does feel like we’ve been here before, and it’s fair to wonder how many more times we’ll have to go back. The Maze Runner is like a boys’ recess set at an adult-free summer camp. (A lone girl eventually enters the scene.) The youths live in a clearing surrounded by enormous concrete walls, on the other side of which is a labyrinth guarded by killer flesh-and-metal bugs. One day, into the clearing pops Thomas (Dylan O’Brien), who proceeds to turn from a passive “greenie” into the multiracial community’s alpha determined to lead them out of the maze.

The action sequences have a disturbingly graphic muscularity (one character blows his brains out; another spears a bad guy). The downtime’s got some comedy, and O’Brien, with his giraffe’s neck, works as a hero (he just looks chosen). But that aforementioned apocalepsy sets in almost immediately. It’s exhausting, knowing that a mash-up of Lord of the Flies, The Goonies, and the wardrobe department of Newsies exists beneath an Orwellian dome — and that the dome will require at least two more movies to lift. Once President Esteemed Actress shows up, you wonder whether these series are to the Winslets and Streeps of the world what Marvel movies are to Scarlett Johansson: currency.

Anyway, it’s not as if these movies are really about the end of the world (although there is a World Catastrophe Kill Zone Department). The exposition that clogs up the last 20 minutes lays out a depressing idealization of testing, skill sets, and leadership that culminates in backhanded praise for being exceptional pupils. What we’ve got here is an entitlement narrative. These kids are fighting to save what’s left of civilization, but they might as well be trying to get into the hardest college on earth. 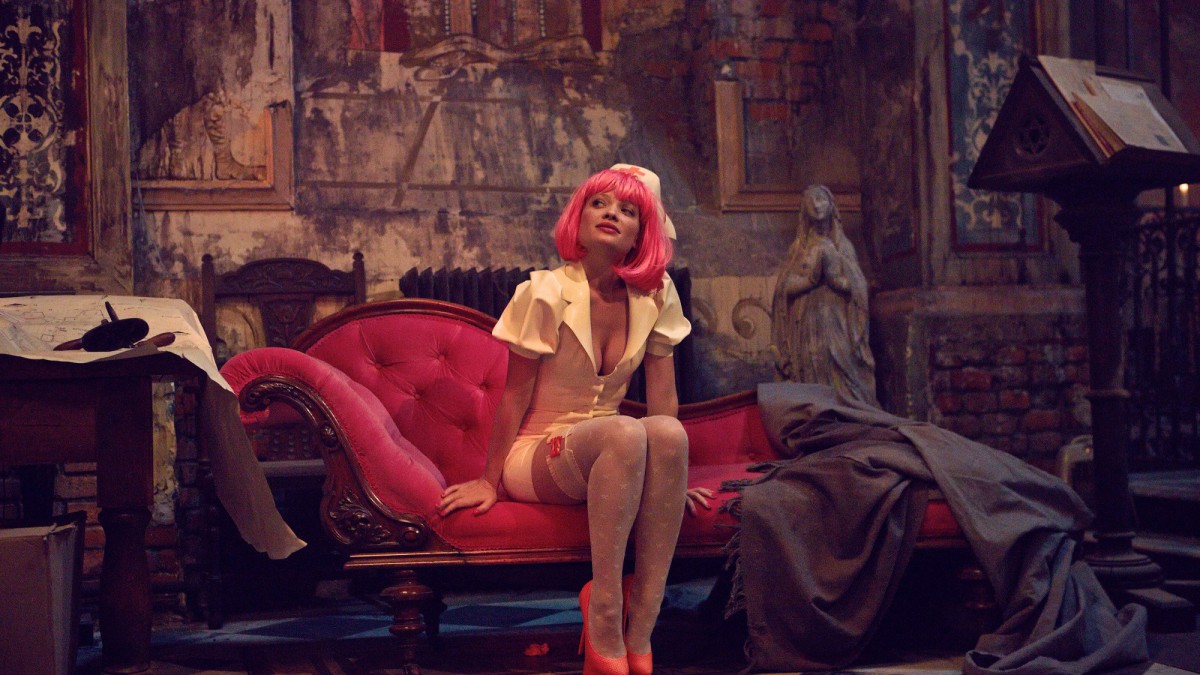 What these teen dystopias need is more Terry Gilliam. He’s been doing the end of everything for decades, and he could use some new nightmares. In The Zero Theorem, he offers what amounts to a jeremiad (written by Pat Rushin) against the omnipresence and omnipotence of digital technology and the corporate entities that control it. The film is set in a world of big spaces and audiovisual farce — miles of art direction, the pumping doink of gears and hissing of gas, and over-the-top gesticulations from scores of flamboyantly dressed extras. It’s Franz Kafka dreaming in Willy Wonka’s bed.

A completely hairless Christoph Waltz plays Qohen Leth, a programmer functionary at a business called Mancom — not a gay dating site, but a company of “endless possibility.” Leth waits for his landline to ring and for whoever’s on the other end to offer a key to happiness. In the meantime, he sees a virtual shrink (Tilda Swinton, doing her Yorkshire bit from Snowpiercer here, too), becomes obsessed with a woman (Mélanie Thierry) who rescues him when he chokes at a party, and befriends the teenage computer-whiz son of the corporate overlord (Matt Damon, with a gray crew cut).

Where these relationships go is nowhere new, surprising, or especially deep. Some of the technology deployed — enormous smartphone screens, virtual reality — is tiresomely familiar. But the movie’s allergic reaction to totalitarianism, particularly as a goal of big business, does culminate in a touching final image. This is the last installment of what Gilliam has called his Orwellian trilogy (Brazil and Twelve Monkeys precede it). This movie has a similarly fanciful air of paranoia and depression, even though it’s missing the philosophical and thematic grandeur of its predecessors. The culture’s caught up to Gilliam. Everybody’s doing Orwell now. But Gilliam’s appropriation feels both aptly skeptical and unfashionably utopian. Forget the smartphone. He’d rather swipe at the sun. 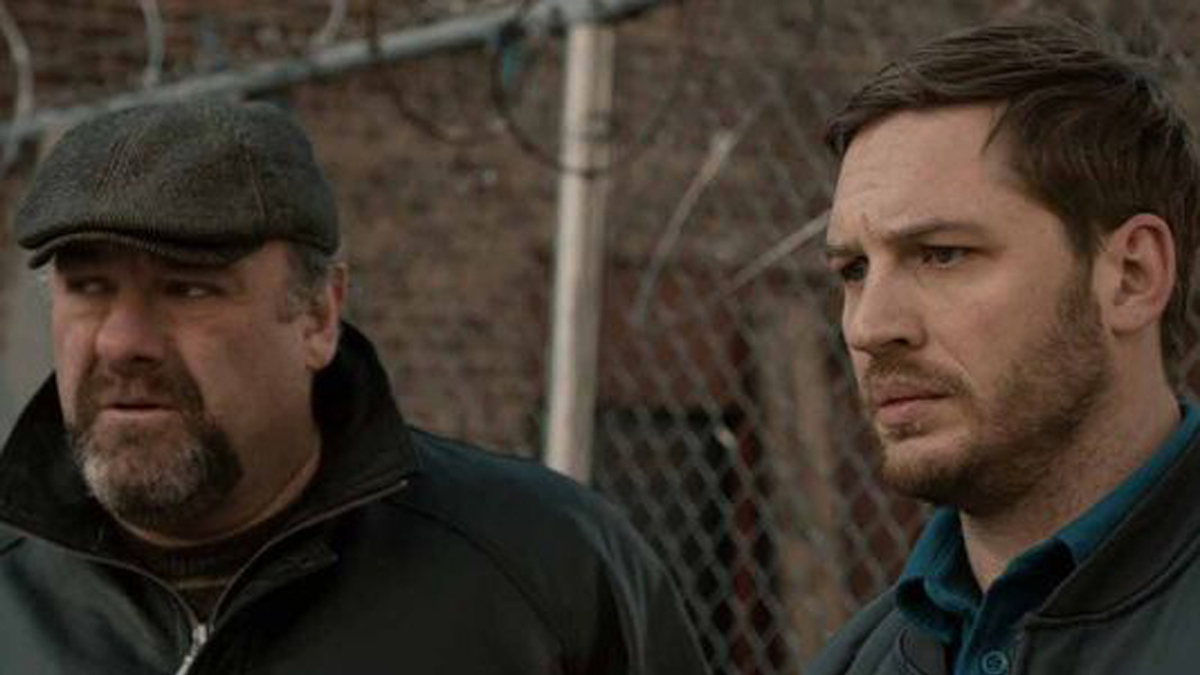 Dennis Lehane adapted his own short story (“Animal Rescue”), in which a low-rent underworld shoot-’em-up meets first-time dog ownership. It’s involving, but not enough to keep me from noticing how much of the advancement of the plot depends on shadiness failing to adequately recognize shadiness.

Tom Hardy and James Gandolfini play Bob and Marv, two Brooklyn guys who work in a bar Marv used to own. Now Chechen gangsters use it as a cash drop for the various arms of their organization. Bob has a manner as soft as sweatpants. He happens upon a puppy, roughed up and left in the trash, and winds up taking care of it. The woman (Noomi Rapace) giving him canine-care tips appears to have had some kind of relationship with the jittery creep (Matthias Schoenaerts) who’s stalking Bob and maybe the puppy. Marv, meanwhile, looks to be up to the kind of no-good business that a certain class of crook and gangster never seems smart enough to avoid. Soon, most of the characters are in over their heads, and the body count rises.

Roskam directed the constantly improving Schoenaerts in the 2011 Belgian crime thriller Bullhead. That was a more overheated cousin to this new movie, which has the seediness you’ve come to expect from something set around a mob-owned bar. Lehane writes some sharp, funny exchanges, but the longer the movie goes on, the less original it becomes and the harder it is to believe — even with Hardy doing a legible, alluring variation on Marlon Brando. His mumbling is the meat and potatoes of the movie’s accent stew. (John Ortiz, Michael Aronov, Elizabeth Rodriguez, James Frecheville, and Ann Dowd toss in ripe vegetables of their own.)

This is a movie you stumble across when hunting for something to watch: goodish, with the right dreary atmosphere. Gandolfini is captivating, too, and not because this was his final performance (the movie holds no romance for him), but because he was the rare actor who could transform inconsistency into a dramatic inner contradiction. He gives illogic a malicious sting one last time. 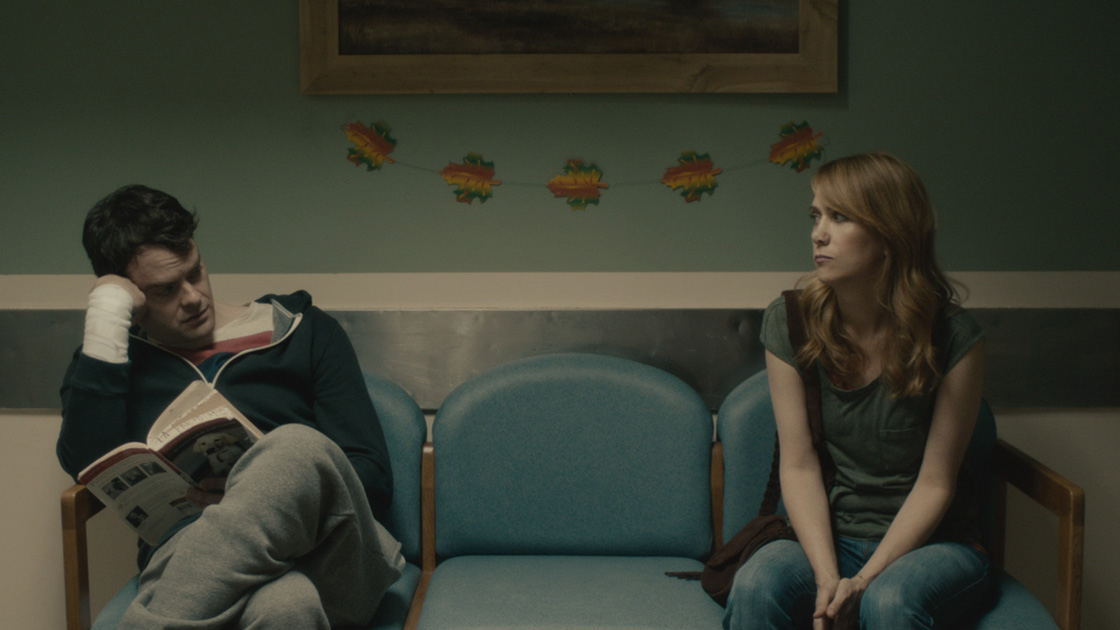 Kristen Wiig and Bill Hader play Maggie and Milo, estranged suicidal twins who are reunited after he tries to kill himself. The script by director Craig Johnson and Mark Heyman does move the needle for dysfunctional family dramedy. After his failed suicide attempt, Milo moves from Los Angeles to New York to convalesce in the house Maggie shares with her guy’s-guy husband (Luke Wilson). Everybody has an argument of some kind, and Maggie’s narration opens the movie wondering, “What the hell happened to us?”

I got halfway to “who cares?” but Wiig and especially Hader are very good with all the clichés. It’s a serious enough movie, but they’re not afraid of being funny. The filmmakers think the comedy is where all the humanity is, and maybe they’re right. But they don’t take humor far enough. They’re not that interested in the fraying psychologies, which comedy could certainly explore. Wiig and Hader make the so-so-TV banalities in the script more tolerable. They’re the right comedic actors for, say, a lip-synced rapprochement done to “Nothing’s Gonna Stop Us Now.” In another scene, they crack each other up at the dentist’s office where Maggie works. Neither scene throws off the movie, but neither seems scripted, either. What if they’d winged the rest of the movie, too?

Two of my favorite movies of the year are also making their way across America right now. I wrote about both earlier this year, and my enthusiasm stands. Pascale Ferran’s Bird People is the happiest surprise I’ve had in a long time, a movie that puts drone technology to brilliant use to tell a story about two people (Josh Charles, Anaïs Demoustier) who separately enjoy a surprising couple of days at an airport hotel. Love Is Strange, by Ira Sachs, becomes less happy as it goes. After years together, two New Yorkers (John Lithgow and Alfred Molina) get married, only to suffer a series of circumstantial and cosmic indignities. It’s a movie as much about class and family as it is about love and gay marriage. Excuse yourself from what’s falling off the assembly line and watch these two films instead.