It’s not that hard to mentally re-cast that old Annie Hall opening anecdote from two elderly women dining at a Catskill mountain resort to two NFL linebackers surveying a training camp lunch buffet: “Boy, the food at this place is really terrible,” one says. “Yeah, I know,” says the other, “and such small portions!”

OK, it’s definitely not fair to call Ballers, HBO’s Dwayne Johnson-fronted summertime show about Miami-area NFL players and the financial advisers who pester them, terrible. There’s far lamer TV out there to sit through — plenty of it isn’t even TV; it’s HBO — and over the first nine of its 10 Season 1 episodes, Ballers has been like a good 90 percent of professional football teams: occasionally exuberant, often baffling, but always totally watchable Sunday entertainment. I just find myself wishing there were more of it. HBO has already re-upped its contract for a second season, which means everyone will be back on the field. (Or, if the first year was any indication, back off the field.) The good news is that Ballers, like a prospect in preseason, has a pretty high ceiling. So far, though, the show has struggled to live up to that potential.

HBO places Ballers in the same category as other half-hour “comedies” like Veep, Silicon Valley, Girls, and Entourage. It’s that last one that the show is most often compared with: there’s the same aspirational wastefulness, the same poolside hijinks and tricked-out rides, the same tableau of (almost entirely dude) protagonists party-hopping, boning randos, dropping six figures on “please forgive me” jewels, and allegedly being good at their jobs despite ongoing evidence to the contrary.

But Entourage never had anyone like The Artist Formerly Known as The Rock. Johnson stars as Spencer Strasmore, a charismatic former football star for both the Dolphins and The U — Johnson himself actually won a national championship playing for the University of Miami in 1991 — grappling with the post-football life. He’s the show’s franchise player, its locker room leader, a force barely constrained by those tight three-piece suits. Strasmore is partnered up with the shameless Joe, played by a grows-on-you Rob Corddry, as sports-focused financial advisers, though the only evidence that these guys have anything to do with managing money is a triple-screen Bloomberg terminal that sits untouched in their office and an occasional random sprinkling of words like “authorization letter” and “annuity” into the dialogue.

An uneven cast of characters round out a roster of athlete archetypes: John David Washington, IRL setter of gridiron records at Morehouse College, is a pointy-bearded joy as mercurial if mostly well-meaning receiver Ricky Jerret. (He’s also Denzel’s son, which is only the second best use of industry nepotism on display. Troy Garity, who plays agent Jason, was named by his mother Jane Fonda after Vietnam resistance leader Nguyen Van Troi.) Omar Benson Miller gives the show much-needed depth as a retired and bored offensive lineman once hailed as the “Black Swan” but now reduced to slinging Chevys on commission. Donovan Carter plays Vernon Littlefield, a defensive tackle for the Cowboys and the closest there really is to a Vince: talented, surrounded constantly by hangers-on, and super boring. Women pop up from time to time to flaunt cleavage, nag, be scheming biatches, wake up tangled naked in high-thread-count sheets, and bring Victor Cruz along to morning-after yacht parties. You know, as women do. 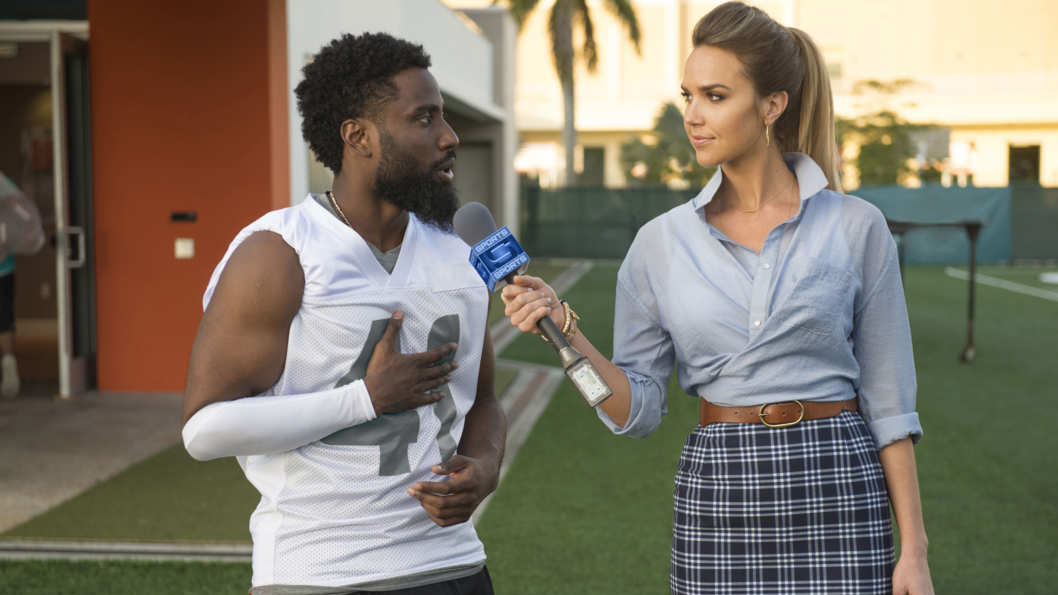 There’s a fun, funny, and thoughtful show in there somewhere underneath all that padding, I just know it. Unfortunately, one of the more interesting elements from the early part of the season — the tension building around Spencer’s possible CTE diagnosis — was ultimately little more than a disappointing head fake. It’s too bad, because Ballers is best when it ditches the attempts at Ari Gold slapstick and just plays things more straight.

Blending the silly quirks of high-roller athlete existence (the “party houses,” the five-figure offers to switch uniform numbers, the absurd characters) with the lifestyle’s hard and difficult truths (the tiny earnings window, the aftermath of repeated brain trauma, the predatory operators) provides enough inherent absurdity to be darkly comic without feeling forced, to be contemplative without getting preachy. Ballers never seems quite sure where exactly it’s headed, though; it has flashy jukes in its arsenal but tends to only advance the ball a few yards.

A blackmail plot line involving drug-fueled photos felt like those endless “where’s Sophia?” Walking Dead installments: a whole lot of episodes wasted on something with almost zero payoff. It’s rare for the stakes to feel particularly high — it’s not quite at the level of “I told you everything would work out, baby bro” Entourage nonsense, but sticky situations have an annoying way of resolving themselves without incident. Since The Sopranos, the penultimate episode of a cable season is typically the meaty one, the complicated intersection where the car crash takes place. Last night’s plot, though, which involved Spencer making amends with a player whose career he ended with a borderline hit, felt contrived and one-note: it wrapped up a little too neatly and hinged upon a character we’d only just met and will probably not see again. (Also, it presented an entirely unrealistic depiction of a Miami Marlins home crowd.)

Mediocre first seasons aren’t dealbreakers, of course; in the same way that athletes are constantly recovering from meh campaigns (how else would we have fantasy sleepers?) TV shows are often rewarded for working hard in the offseason and arriving at training camp in the best shape of their life. Halt and Catch Fire has been widely hailed this year as a program that found its niche in its second year; HBO’s own The Leftovers is about to make a much-needed hard pivot itself. Athletes love to insist that they’d make fewer mistakes if given more time on the field, and I think Ballers would benefit from increased reps. I’d love to see the show as an hour-long dramedy rather than a 30-minute fantasy.

Because, really, who are these people? We’re nine episodes in, and we still don’t know. Introduce us to the characters over a dinner date, don’t just sext us their dick pics. Show us Joe getting dressed in the morning in a cavernous walk-in closet, alone and insecure. Ditto Reggie. Even the smallest amount of groundwork will make scenes like Jason driving home to meet his mom’s skeezy golfer boyfriend actually resonate. Tell us something, anything, about the lives and motivations of the women who decorate the screen. Give us Tracy Legette the onscreen sports reporter eating bar food lunches on the road with her schlubby industry colleagues.

Speaking of industry colleagues: I used to work in wealth management, and from my experience the ratio of Biltmore patio lunches for 30 and getting client photos tattooed on your shoulder to mundane necessities like wire transfers and municipal bond portfolio exposure analyses seems just a leeeeettle beeeet out of whack. (It’s possible we’ll get a little more snapped back to reality when the show inevitably ends Season 1 on a “we’re starting our own shop!” Entourage-style cliffhanger.) I’m not saying to bore anyone with Sharpe ratios, but how about we meet some of the Anderson junior staff who are actually doing the grunt work of answering phones and then blowing off steam at night by gossiping with their roommates about the crazy characters they deal with all day? They’re the ones more likely to leak stuff to Deadspin than vengeful go-go dancers, after all.

I like Ballers, and I want to like it so much more. In an ideal world, the playbook would be rejiggered to give the show double its playing time, but in the real world, that ain’t happening. Still, let’s at least hope that someone figures out how to design those limited touches to be far more efficient.