Couldn’t bear to watch the Grammys last night? Grantland asked two writers to watch the telecast and write down their thoughts in real time as the show unfolded.

Steven Hyden: (:02) Minor complaint about the show-opening AC/DC number: I really wish it would’ve played “Emission Control” off the new record. I guarantee that’s Lady Gaga’s choice Rock or Bust jam. But “Highway to Hell” is money in the bank, even though the band is playing it at half the normal tempo. A plodding invitation to hell? Welcome to Grammys 2015!

Molly Lambert: (:12) I completely forgot that LL was hosting this year. Taylor Swift’s dress is a curtain for the show that is her legs. Obviously Taylor is rooting for Haim in this category, although you’d never get her to admit an allegiance. Sam Smith wins, because Americans love Brits. I misheard Smith saying, “I won a Grammy” as “I wanna grab it,” and then spent a few moments wondering what “it” was before hearing it right.

Steven: Next time Sam Smith comes onstage, LL will be like, “Sam Smith makes us all want to stay with him. Because the song is called ‘Stay With Me,’ and songs are the best!” God, I already feel tired.

Molly: (:19) Anna Kendrick still going for that EGOT, I see. I thought that intro for Ariana Grande was going to be for Meghan Trainor and got prematurely excited. Why is Ariana performing this song? She needs to do “Love Me Harder” or “Break Free” or one of her hits from this year that might help clue viewers in as to who she is. I’m an Ariana Grande fan, and I’m still 100 percent taking this time to refill my drink.

Steven: You’re missing nothing. I have yet to understand a single word this woman has ever sung. This could be a power-ballad redux of “Highway to Hell” and I’d have no clue.

Molly: (:24) Oh god, why is this happening? What is it about awards shows that brings up every bad ’70s-variety-show instinct TV executives have? Also, why are they still trying to make us believe Jessie J is famous in America?

Steven: The only good versions of Jessie J songs are in Pitch Perfect. BRING BACK KENDRICK.

Molly: Either bring up Tony Bennett and Lady Gaga onstage for a cage match to the death, or stop this. Tom Jones, I still would. Thank you, good night. Wait, it’s still going?

Steven: Pretty sure that’s Kenny Rogers playing the role of Tom Jones. Alas, he has chosen not to fold ’em. 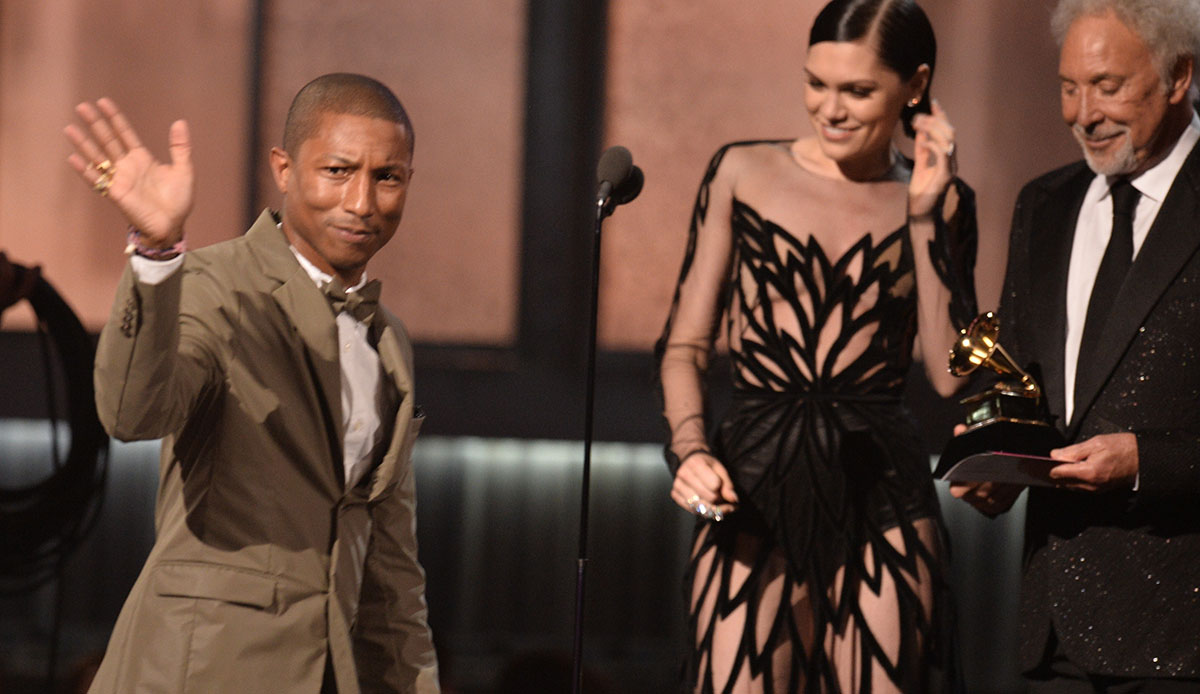 Molly: (:27) Hey, remember “Happy”? Methinks you’ll be having that thought a lot of times tonight. Jokes about Pharrell looking like Pee-wee are trite, so let’s focus on how he’s wearing short schoolboy pants in tribute to AC/DC’s Angus Young.

Why is the walk-off music the sound of a subway train screeching to a halt?

Steven: That walk-off music filled me with dread, and then I heard this: “Coming up, Ed Sheeran with ELO’s Jeff Lynne.” Am I imagining this? Did I die during the AC/DC performance?

Steven: I’m so into this. I guarantee this performance is more in the spirit of A New World Record than anything Sheeran has planned. The stage setup is so prog! I’m going to start referring to Miranda Lambert as MLT.

Steven: I love Robin Gibb’s role as Abby on Scandal.

Molly: (:40) Sam Smith gonna claim people loved his music because he started being himself, not because he had the biggest promo campaign of the year. (Fun fact: He’s also Lily Allen’s cousin, apparently?)

Steven: Inside host LL Cool J’s head right now: “Whoa, the Grammys sure are staying with my boy S-Swizzle tonight.”

Molly: (:49) Ugh, I was really hoping Kanye would take off the Auto-Tune to do this song live — now that I heard his real voice in “FourFiveSeconds,” I want to hear it more. Why isn’t Paul McCartney up there playing keys live? He’s there, at the show. We’ve seen him like 10 times in the crowd already. Let the man onstage to do “Jet”!

Steven: Per their custody agreement, Kanye gets Macca on weekdays and Grohl gets him on weekends.

Molly: Is Kanye a witch? Is he standing over a bubbling cauldron? Is he wearing basketball shorts over sweatpants? No, wait, that was just an optical illusion.

Steven: This song sounds like a segue track on My Beautiful Dark Twisted Fantasy. Keep waiting for a better song to explode out of it.

Molly: (:49) OK, Miley looks like Sharon Stone in Basic Instinct and I love it. Whenever Nicki says “awl,” my heart flies.

Molly: Thank god for Madonna, someone who understands SPECTACLE. Finally some fucking dancing at this awards show. Bondage minotaurs to the front! TAKE ME TO DANCETERIA, MY MALEFICENT QUEEN! THE OLD SHOWGIRL’S STILL GOT IT!

Molly: I think the ’90s just died again. I love Beck. Are the Grammys over yet?

Steven: Man, U2 didn’t even show up this year. That’s like Meryl not showing up for the Oscars. U2 is apparently still stuck in “we gave away our worst album for free” jail. Still have faith that the comeback record will be fire, though.

Molly: (1:11) Whoa, Ed Sheeran and John Mayer playing together? Taylor Swift and Ed are going to have a long talk later tonight.

Steven: This is lame even by white-boy blues-pop standards. Why must my demographic always bring things to a screeching halt?

Steven: A cool white guy! It’s a Grammys miracle! Lynne is daring Sheeran to ruin “Mr. Blue Sky,” but this song is unkillable.

Steven: That’s just the Grammys pandering to hate-tweeters, though Seacrest referring to Adam Levine and Gwen Stefani as “two of our finest” surely warrants an FCC fine.

Molly: (1:28) Is now a good time to admit I thought this Hozier song was by Fleet Foxes or Band of Horses until right now, just based on hearing it on the radio a million times and never looking it up? I didn’t expect this guy to look so much like Nick Cave fucked Tim Burton.

Steven: I’m sure it wouldn’t surprise you in the slightest if I copped to liking this song. And I fully endorse Hozier’s foxy “Amy Irving in Carrie” perm. #TEAMHOZIER.

Molly: Bring Jeff Lynne back out and let him just jam with Annie Lennox for the next couple of hours.

Steven: Hey, I didn’t put Miranda Lambert’s Platinum on my year-end list, and I should have. The rock records in the country category out-rock the rock albums in the rock category.

Molly: (1:37) Pharrell is going to start a new trend in hats every year, isn’t he? This song is still great, so shrug emoji. I will listen to this silly version because at least he’s TRYING something.

Steven: I’m still trying to recover from the tsunami of charisma that is the Weeknd. Millennials will never be able to explain to their kids why they fell for that guy.

Molly: Whatever cult Pharrell is promoting with this performance (the Golden Fang?), I just might join.

Steven: This performance is very Holy Mountain. Finally, my decision to take mescaline before showtime is paying off.

Molly: And they won’t even cut to Taylor in the audience for lolz.

Steven: (1:57) There is a crisis in male pop stardom right now, and Imagine Dragons is exhibit A. This band is like a flaccid penis with male-pattern baldness.

Molly: I just went to the El Cortez casino! That’s all I have to say about this performance.

Steven: Of course it’s a Target commercial. When did men in pop become the worst? BE COOL, YOU BASTARDS! 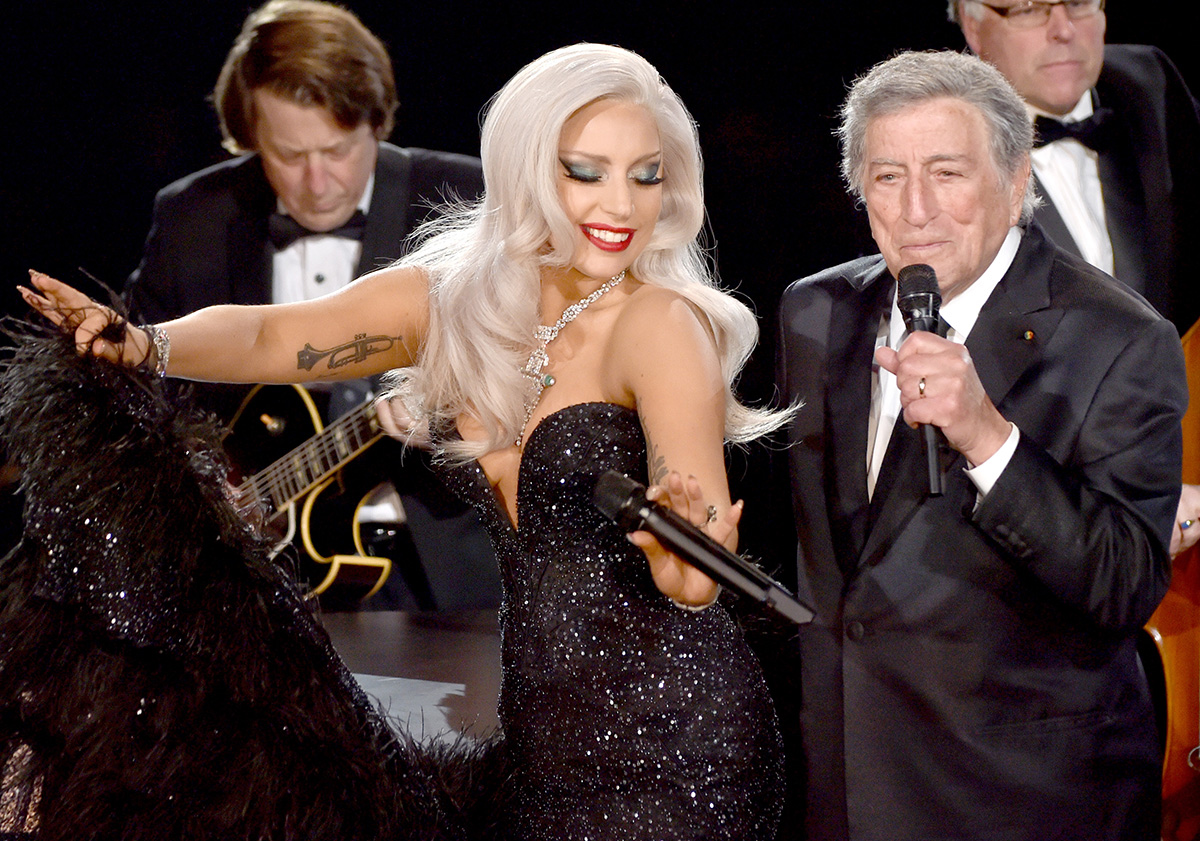 Molly: (2:00) I stand by my love of the Gaga and Tony Bennett duets album. They are adorable together.

Steven: I feel like this would be improved dramatically if the band was composed entirely of Muppets.

Molly: I’m so charmed by Jazzga, I can’t help it.

Steven: This is your Hozier.

Molly: (2:07) Man, Usher with a ballad, too? Is Madonna gonna be the only one to dance all night?

Steven: It’s not as if Stevie Wonder ever wrote any good dance songs, Molly.

Molly: God, is it over yet?

Steven: No bullshit: Stevie is my favorite harmonica player of all time.

Steven: Kacey Musgraves minus the preciousness plus “Sunday Morning Coming Down” equals Brandy Clark. That was killer.

Molly: (2:23) DEAR PAUL MCCARTNEY, PLEASE INTRODUCE KANYE TO JEFF LYNNE SO THEY CAN MAKE SOME SONGS TOGETHER. OOH, THAT’S ALL I WANT.

Steven: Do you really want Kanye to make his Flaming Pie? 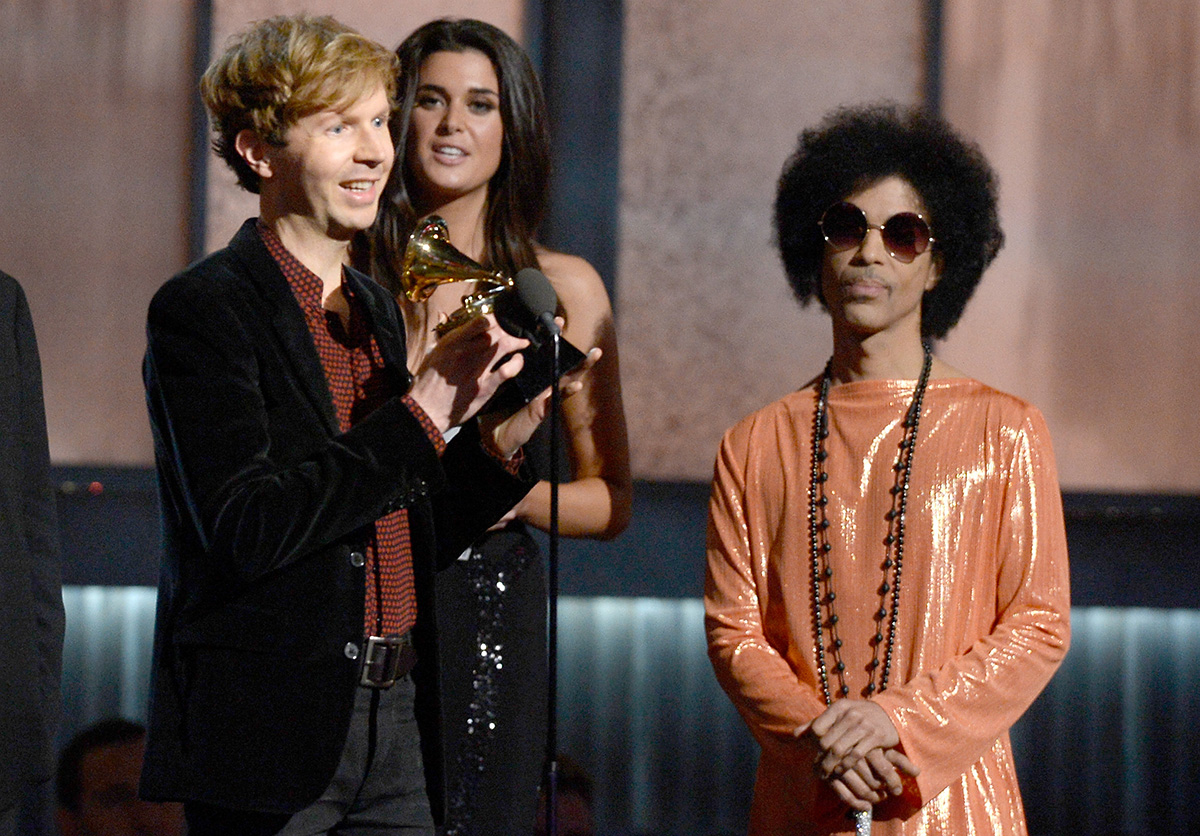 Molly: Do you think he thought better of it when he saw the benevolent shining tangerine light of Prince? My favorite part of the Super Bowl was the brawl. This awards show could definitely use a Kanye rant. I think Prince just telepathically sent Kanye a message like, “No, my child, don’t do it. U R 2 funky 4 this world.” And Kanye actually listened because it came from Prince?

Steven: (2:49) The Grammys are getting weird! I’m back onboard! Shia introducing Sia! SNL stole this song from Sia, and Kristen Wiig is stealing it back!

Steven: (2:54): Max Martin looks like the guy from the Freecreditreport.com band.

Molly: Would you be surprised if he were that guy? That free credit report song is catchy as fuuuuuuck. 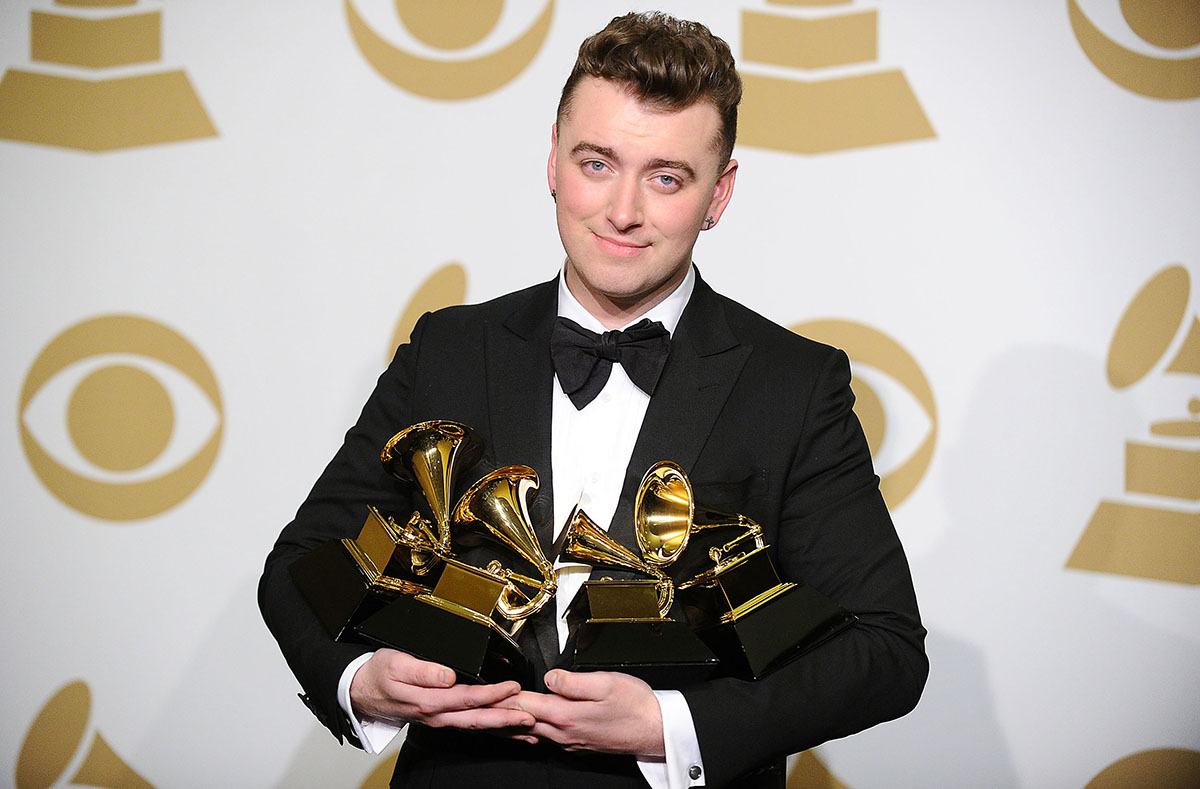 Steven: (3:06) This Beck song reminds me of “Ride Like the Wind.” He’s got two turntables and a badass pink-flamingo album cover.

Molly: That’s funny you brought up Christopher Cross, because someone in my timeline just mentioned that Sam Smith should be wary of the Christopher Cross curse. Cross won a ton of Grammys and kind of faded away afterward. I keep saying this, but I can’t believe the Beck who made the album Mellow Gold now makes actual AM Gold radio–style mellow tunes like this. I miss the old, weird, Beckmerica.

Steven: Sam Smith: “This is the best night of my life.” The rest of us: “This is a night, and like all nights, it will end eventually because that’s just science, right? Right?”

Steven: (3:20) I was sure the “In Memoriam” tribute would leave off A$AP Yams. Pleasantly surprised to be proven wrong.

Steven: If Grammy history holds, Dave Grohl and an army of guitar players are about to jam on some solos right about now.

I know when I think of the civil rights movement, I think Gwyneth Paltrow, wait, what?

Steven: This is amazing. The Grammys are already trying to make up for giving Album of the Year to Morning Phase.

Molly: (3:34) Now they’re trying to make up for the Oscars beefing it on the Selma nominations.

Steven: Like the Selma marches, tonight’s Grammy telecast began in 1965.

Molly: John Legend is the best.

Steven: You know what’s the best? The Grammys being over! See you next year, Molly!