The Entourage movie is a go. Have you ever read any sweeter, more pulse-quickening words? How about these:

The Entourage movie is a mere four weeks away.

The dream reunion project — once plagued by unfortunate intrafamilial misunderstandings framed as petty salary disputes by a click-obsessed tabloid media determined to tear the boys apart — will arrive in theaters four Wednesdays hence, on June 3, a full two days earlier than its originally announced June 5 release date. Is there a better sign of Warner Bros.’s confidence that its Little Entourage Movie That Could is ready to steamroll the unfortunate also-rans the other studios have foolishly decided to lay down in the path of their juggernaut than giving it that momentum-generating head start? Melissa McCarthy’s Spy and Insidious: Chapter 3 will have to settle for third and fourth place behind the second-place, second-weekend tally of The Rock’s San Andreas. Write it in the sky above the Laurel Canyon hiking trail so that every executive in Hollywood can cower beneath the soon-to-be-fulfilled prophecy. Cut open Turtle’s stomach and let the entire town read his steaming entrails to confirm the augury. Sorry, The Rock. Sorry, Melissa. Sorry, Dermot Mulroney. First place is locked up. Sleep in that Sunday, the celebratory call isn’t coming. The Entourage boys, all tousle-headed and bleary-eyed from a debauched weekend of box office victory, are coming to eat your brunch. Drama sneers at your shitty pancakes, bro.

To prepare us for the cinematic event of the summer — nay, the decade — we’re going to initiate a weekly countdown to V-day.1 Starting right now, we’re going to meet every Wednesday, right here, to lather ourselves into an anticipatory frenzy worthy of the mind-shattering delights that await us on June 3. May the report of our collective high fives startle the sleepy workers in the majestic dream-factory below. Let’s do this.

We can’t do E-day. E-day sounds like “E’s day,” not “Entourage day.” Let’s go with Vince and Victory.

Episode Rewatch of the Week: 13 Questions About the Pilot That Changed the World

1. Does the theme song hold up?

You just heard it. The heart flutters. The spirit soars. The testicles descend, freed from the place in the body cavity they retreated to, ready for action. You can taste the neon-suffused grime of Hollywood Boulevard — the real cooked-in stuff, the stuff they couldn’t get out with the power-washers when they decided to turn Hollywood and Highland into a mall — in every note. Somewhere, Perry Farrell pours himself a shot of premium tequila, staring at the message in the memo line on the endorsement check they cut him: YOU WERE A SUPERHERO ONCE. He hears the echoes, soft at first, but building in intensity until they shake his very soul: “Oh yeah. Oh yeah. Oh YEAH.”

Yeah, it holds up. Maybe too well. Ask Perry.

In the opening scene! Entourage, at its heart, is just the story of four guys who like to eat together. The premise is established immediately. There they are, at a restaurant, just trying to get their nosh on, when they’re accosted by  a pair of attractive female fans who are upset that Vince did not invite them to his big movie premiere later that evening. “Not hot enough,” negs Turtle. “Fucking models. If they were any good, they’d be living in New York,” explains Drama. “I’m not getting back with my ex-girlfriend, don’t worry,” whines E. “I’m going to do something professionally irresponsible at the first opportunity,” mutters Vince to himself. Nothing will get between the boys and whatever carnal delights await them after that premiere. Not even lunch.

3. Does Vince do something professionally irresponsible?

Fresh off the premiere-night triumph of Head On, Ari sends Vince the script for Matterhorn, the Die Hard–at–Disneyland blockbuster some French director is dangling in front of them. Amazing! Everything’s turning up Vince! He promptly blows off reading the script and goes into the meeting cold, but is sufficiently charming to generate a $4 million offer, double his Head On fee. Turtle and Drama simultaneously ejaculate at the thought of all the private-jet sex they are going to have inside the G6 they are going to convince Vince to buy the instant the Matterhorn windfall arrives. Vince attempts to read the script but is distracted by the sound of private-jet noises in his head.

4. Does Vince entrust E with a very important life decision?

Even after the offer, Vince is not going to finish the script. He acts. He does not make decisions. E has taste. E is sensible. E is now the one who reads the scripts and makes the decisions. E briefly laments not being as handsome as his best friend, because with a Vince face, he would conquer all of Hollywood single-handedly.

E’s first deliberation, “I think the script’s a piece of shit and you shouldn’t do the movie,” imperils the payday that would make their wildest private-jet-orgy fantasies a reality. Uh-oh.

5. Do Ari and E clash over the handling of Vince’s career?

Indeed they do. They meet for a dinner at Koi, a celebrity hot spot instantly recognizable to anyone who lived in Los Angeles/read a copy of Us Weekly in the early aughts. Ari dismisses E as a “pizza boy” — in fairness, E actually was a pizza boy, so the sickness of the burn is compounded with the arsenic sting of truth — with no business running Vince’s life. E threatens to punch Ari in the face. Ari laughs at his attempt to “go street” on him. They do not play nice together. Adversarial relationship established. 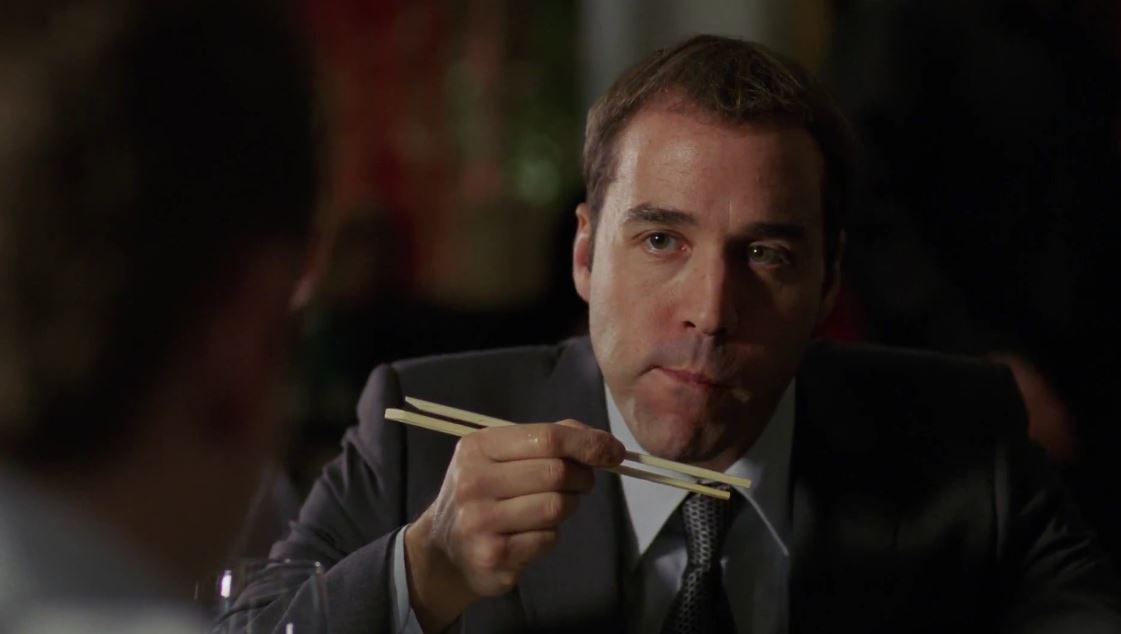 6. Does Vince’s delegation of his career decisions to former pizza boy E have any negative consequences?

7. Do the boys trade on Vince’s fame to have sexual encounters with groupies?

Indeed they do. All of them. Entourage is, at its heart, also just the story of some guys who like to trade on Vince’s fame to have sexual encounters with groupies. There is no shame in their groupie-sex game. In fact, when E indicts Turtle’s ability to get laid without Vince, the answer is immediate and unrepentant: “Do I give a fuck?” Later, Turtle puts his strict zero-fucks-given policy into practice when he offers a disappointed groupie — who’d hoped to be the one to go to bed with Vince that night — an opportunity to see where their meal ticket eats his breakfast. She takes Turtle up on the offer. Turtle is more than comfortable with the transaction. Five stars, would do business again, wearing a Vince mask, if necessary.

8. Does Johnny Drama make everybody breakfast?

He does, the morning after the collective groupie conquest. “I fucked like a puma,” he brags, cracking some eggs into a frying pan, establishing his erotic-jungle-cat/short-order-cook bona fides.

9. Does Turtle explain the Big Head Theory of Movie Stardom, lay out the rules for their entourage, and say something graphically abhorrent about a woman with whom he was very recently intimate?

“No girlfriends, no commitments.”

“My girl went nuts. First, second, juggling the speed bags. Then next she was telling me how her uncle used to watch her shower.”

10. Do real and fictional worlds collide in a chance meeting with Mark Wahlberg, the inspiration for Vinnie Chase? 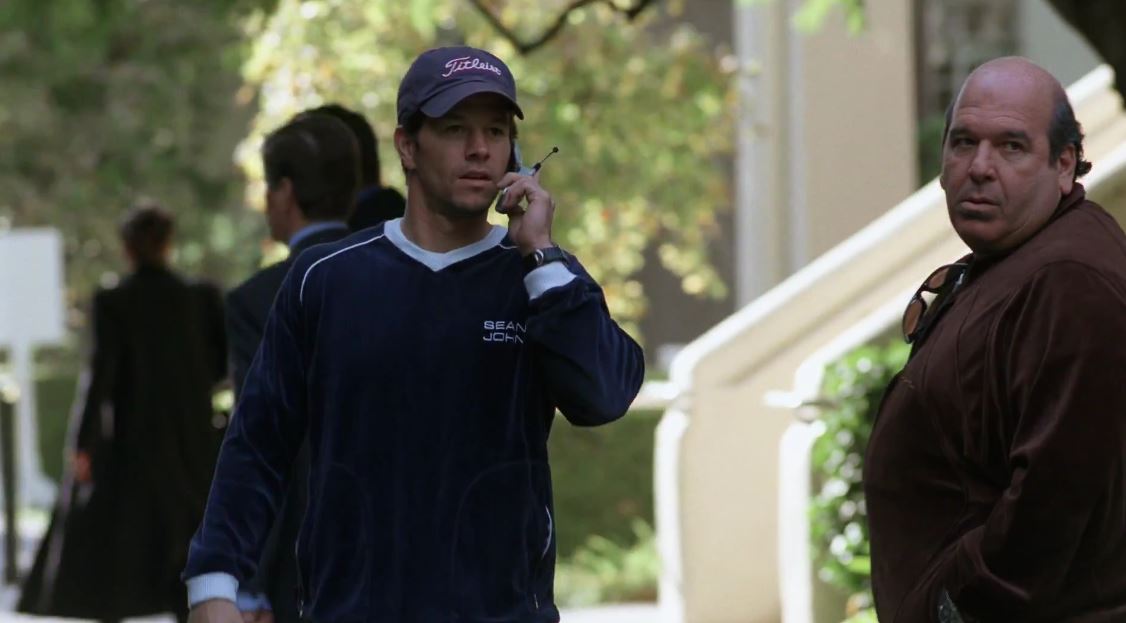 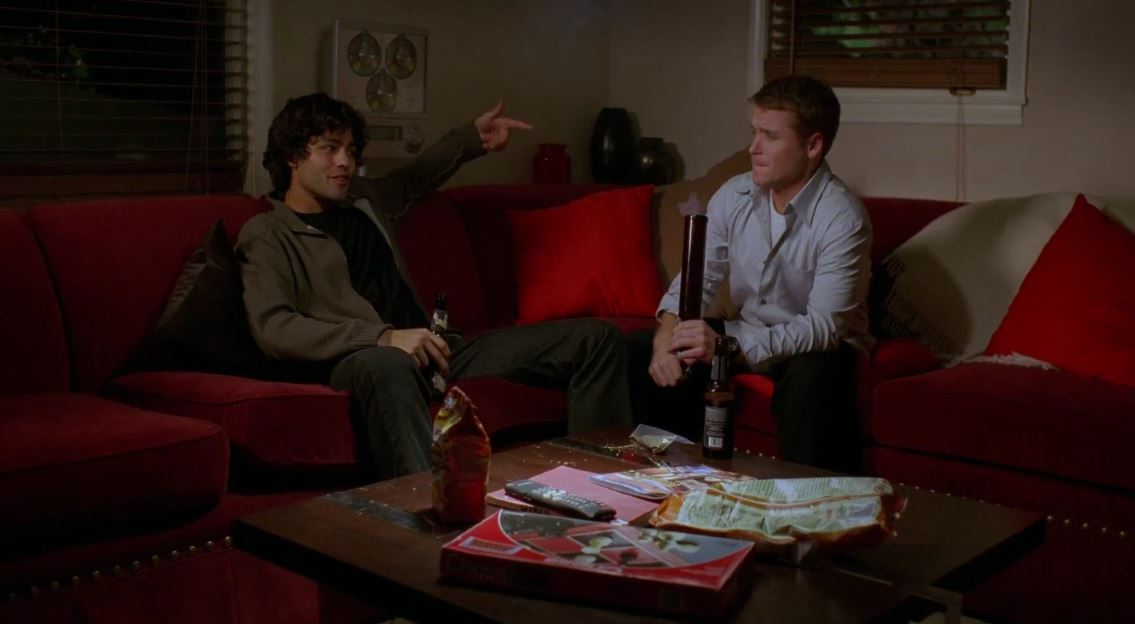 12. Are there any celebrity cameos in which a notable Hollywood personality sends up his or her image to hilarious, satirical effect?

Other than Wahlberg, only Ali Larter — playing “Ali,” a romantic Vince entanglement — drops in. There are, however, mentions of Warren Beatty (“I heard Warren Beatty sent back 300,000 one-sheets for Heaven Can Wait because his dick was too small in sweatpants”), Vince Vaughn (“that puffy motherfucker” who was allegedly sleeping with E’s ex), and temporary offscreen rival Farrell.

13. Would you, the theoretical HBO executive tasked with a decision that could change the fortunes of your prestige-cable outlet forever, pick up Entourage to series based on this pilot?

Yes, you would. The Entourage pilot is a perfect pilot.

But you’d cap the series at three seasons, for you are a supremely wise theoretical HBO executive who suspects that the material might be stretched thin over eight years. You wouldn’t want to doom these characters to relive the same minor-obstacle-surmounted-on-the-way-to-inevitable-success cycle over and over again, like four Sisyphuses pushing a giant eight-ball up the Hollywood Hills, only to watch it tumble down to the bottom, shatter open in a cloud of pure Colombian majesty, and kick-start the greatest coke party the world has ever seen.

Buy yourself a private jet. You’re amazing at your job. They’ve got the blow handled.

“The space that Ari occupies is that incredibly low frequency that one can fall under if you’re not present. So if you’re not present, you’re incredibly reactive and you’re in your head. That’s where he lives […] But as a person, it’s not necessarily healthy to live there, if that makes any sense. […] This character is played with Commedia dell’Arte stakes, which is … you’re completely immersed in one of four states — happiness, sadness, anger, or fear — at all times, and that’s part of the training that I come from. … Everything means the world to him. And so it was just so fun and cathartic to play that. And at the same time … listen, your body thinks you’re throwing a temper tantrum for 12, 14 hours a day. So it can be a little taxing.

What a life #MrSelfridge had and a legacy that continues to thrive… This is his modest resting place, grateful to have the chance to tell his story.

Ari Gold triumphantly squats upon the grave of the inferior television character who will never overshadow him, no matter how many years he toils on in British-government-sponsored TV obscurity.

Countdown continues. Seeing us pop up everywhere in the lead up to the #entouragemovie premier on #june3 – check out the @vanityfair article (link under my profile pic)

Quick drop by on THE VOICE !!! #entourage movie #june3rd

You hear that, Perry Farrell? Johnny Drama’s ready to get into the premium-spirits game. Be afraid.

Next week: We are one week closer to the Entourage movie.