The Death’s-head of Wimbledon, Part 5 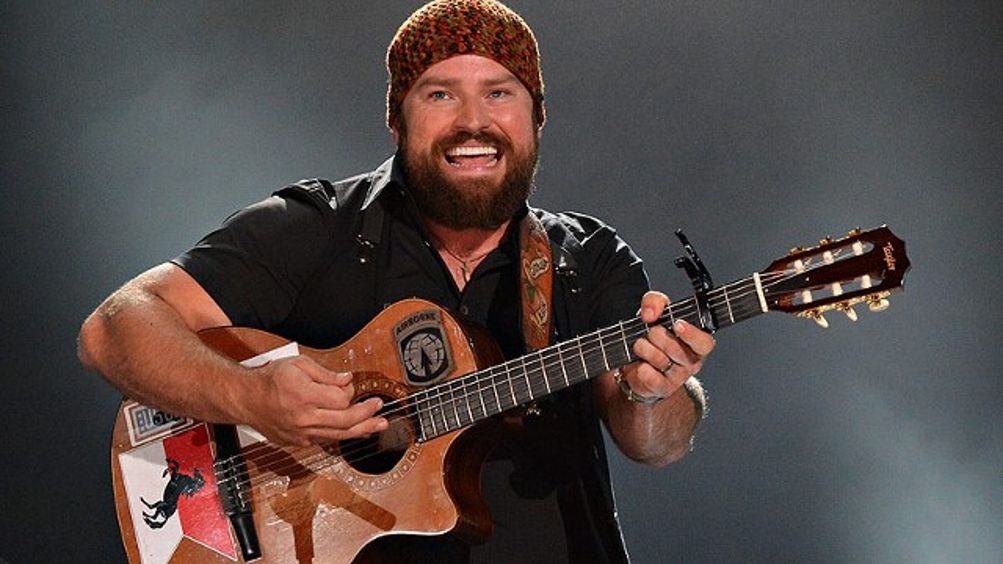 When contemplating Uncaged, the latest from beard-y and Bonnaroo-bred country act Zac Brown Band, you can set aside all the usual demographic signifiers. We won’t be focusing on age, race, gender, or socioeconomic background to get to the bottom of ZBB’s popularity. Instead, let’s talk pontoon boats.

Sometimes with music, it’s not what you hear but where you hear it. Just as living amid a tensely wound and relentlessly throbbing cityscape goes well with tensely wound indie rock and relentlessly throbbing hip-hop, appreciating Uncaged — described by Brown, with alarming accuracy, as “your basic country-Southern-rock-bluegrass-reggae jam record” — might very well hinge on your proximity to a lake and a flat, floatable surface ideal for beer-swillin’ and tobacco-chewin.’ Otherwise, Uncaged might seem like a Frankenstein’s monster patched together from spare parts lifted from some of the wackest music ever.

An acolyte of modern country godhead Jimmy Buffett — who’s proven to be at least as influential as Johnny, Waylon, and Willie on this generation of male country stars — Brown specializes in staycation fantasies for those too busy (or too cash-strapped) to stick their own asses in all of the exotic beaches he sings about in hits like “Toes” and the Buffett-assisted “Knee Deep.” Imagine that video of the guitar-store guy running through the 100 greatest riffs in rock history — only every song is by Buffett, Dave Matthews, Bob Marley, or James Taylor, and they’ve been made to sound more or less indistinguishable from one another. (ZBB’s previous major-label releases, 2008’s The Foundation and 2010’s You Get What You Give, have the same M.O.)

What makes Brown tolerable (and, at his best, engaging) is his lack of pretentiousness. He sings in an endearing, every-guy tenor that can slip out of a stars-and-stripes-emboldened Southern drawl and into a half-baked Jamaican patois with relative ease. He’s not a gifted vocalist, but he has the ingratiating enthusiasm of a road-tested entertainer who would never let a sparsely attended county fair gig undermine his sense of “connect with the audience at all costs” professionalism. He’s been trained to make you like him, and after a while, it works.

Years before The Foundation became a surprise hit, setting Zac Brown Band on a tear of eight no. 1 country singles over the course of two platinum-selling albums, Brown really was slugging it out in the cover-band trenches. And he’s still bringing that crowd-pleasing mentality to his records. Uncaged is “really about making people dance,” Brown has said, and there are all kinds of songs for all kinds of dancers. “Jump Right In” is the one with the Caribbean accents on loan from a cruise ship commercial. “Island Song” is the one destined to be slotted between “Son of a Son of a Sailor” and “Cheeseburger in Paradise” in the happy-hour playlist at your local Margaritaville. The title track is the boogie-woogie jam-band song for Widespread Panic fans high on whiskey-scented whippets. “Goodbye in Her Eyes” and “Lance’s Song” are the easygoing ’70s country rock ballads, informed by the Eagles’ Their Greatest Hits: 1971-75, the album legally reissued to Americans over the age of 45 every time they buy a new SUV.

Then there’s “Overnight,” my favorite song on Uncaged, where Brown locks into ersatz bedroom soul with the misguided verve of an improv actor committing to a “John Wayne as a gay Pakistani convenience store employee” impression. Over some PG-13-rated bump-and-grind and horns from very special guest Trombone Shorty, Brown commences to knock Birkenstocks with a very special lady friend. “Ain’t no time for talkin’ / show me what you got / we’re gonna get this bed a-rockin’ / we’re not gonna stop,” Brown sings wolfishly, aiming for Marvin Gaye and arriving instead at the sultriest sex song Little River Band never got around to, ahem, laying down.

Yes, Zac Brown is one corny (and horny) motor scooter. But his brawny gregariousness puts this stuff over surprisingly well, even when his most egregious acts of pandering (like 2008’s “Chicken Fried,” his first Billboard country no. 1 single) threaten to expose the craven underbelly of his “adventurous” musical inclusiveness. A mishmash of country harmony and patriotic posturing with a subtle underpinning of rock muscle and a goofy reggae coda, “Chicken Fried” initially seemed like just another rundown of generic redneck romanticisms, with its shout-outs to “cold beer on a Friday night” and growing up “beneath the shade of a Georgia pine.” But Brown sang it with such honest affection that “Chicken Fried” became a genuine anthem of country pride by the time it slipped into that slinky shuffle at the end. The song has its share of holes, but Brown’s generous spirit managed to fill them.

That same spirit also redeems “Overnight,” whose carefree quality is nowhere to be found in “Come Over,” the bloodless hit single from Kenny Chesney’s recent Welcome to the Fishbowl. In the video, Chesney rolls around with some skinny model type on a luxury yacht like a photo negative of Kanye West. It is, shall we say, less than convincing. “Come Over” is, visually and musically, utterly inert as a representation of sexual desire; the song’s coolness is conveyed a little too perfectly by the video’s icy black-and-white cinematography.

Earlier this year, New York Times music critic Jon Caramanica wrote about “ the masculinity crisis in mainstream country,” and while he didn’t single out Chesney by name, this phrase instantly brings “Come Over” to mind. It is the apotheosis of what Caramanica identified as “soft rock becoming a more relevant touchstone for the genre than its ragged roots.” The antidote to this has been the rise of “the approachable outlaw, who wants to tweak the system from within but who puts little at risk.”

Caramanica’s piece centered on two of the most successful examples of the “approachable outlaw” archetype: Jason Aldean, whose My Kinda Party was the second highest selling country album of 2011 (coming only behind Taylor Swift’s colossal Speak Now); and Eric Church, whose third album, Chief, recently went platinum. And there are younger, scrappier pups nipping at their heels, like Church’s tourmate Brantley Gilbert and 22-year-old Thomas Rhett, whose debut single “Something to Do With My Hands” has a naughtiness reminiscent of Southern rock’s last great Top 40 hope, the Georgia Satellites. If you happen to feel (as I do) that young country singers sounding like the Georgia Satellites is a positive development for our society, then you might even forget that “approachable outlaw” is supposed to be a backhanded compliment.

The best of this relatively well-behaved bunch is Church, a North Carolina native who released two very enjoyable records that preached country traditionalism while leaning heavily in a rock direction before Chief made him a Grammy-winning star. Church (like Brown) makes sure to acknowledge his core constituency without being beholden to it. Church’s 2006 debut, Sinners Like Me, features “Pledge Allegiance to the Hag,” a tribute to Merle Haggard, and Chief has the provocative “Homeboy” (with its disdainful depiction of a country boy wearing a “hip-hop hat” and “pants to the ground”) that qualifies as his politically ambivalent “Okie From Muskogee” moment. But Church also was the only country artist invited to play the Metallica-curated Orion Festival last month in Atlantic City. And though Chief includes a track called “Country Music Jesus,” its best song and biggest hit is “Springsteen,” a nostalgic ode to lost love both romantic and cultural. The subject of “Springsteen” is a girl Church used to love way back when, but it’s also about remembering a time when guys like Springsteen could still be considered pop stars.

If Church “puts little at risk,” it’s at least partly due to there being fewer risks left to take in country music. The outlaws of the early ’70s modernized the genre by allowing contemporary rock culture to infiltrate what had been a closed-off world. Over time, the gap between mainstream country and mainstream rock shrank to a slim divide, and then — with the rise of the Garth Brooks in the ’90s — a silent takeover of the former over the latter started taking place. Church and his contemporaries came of age in an era when the rise of mega-selling male country singers coincided with the death of ’80s heartland rock as a commercial entity. Today, rock’s blue-collar roots exist most visibly in metal and heavy-riffing power country. When Church sings “Two Pink Lines,” a winning early single about an unplanned pregnancy, he occupies a space once held by the John Mellencamps and Bob Segers of the world.

Chief has been a mainstay in my car CD changer for a while now. The other constant is The Black Keys’ El Camino, and sometimes I’m convinced that they’re actually the same record. Both could be described as “safe” reiterations of guitar-oriented music with blues and country shadings. And yet this kind of album — the radio-dominant and broadly popular “arena” music that used to reside at the center of mainstream pop — has become such a rarity that executing it successfully does seem like a different kind of daring.

Brown also fits the loose definition of the “approachable outlaw,” cutting his own path that hews closely to the respectable commercial middle of modern country. But like Church, he can’t really be hemmed in by old genre distinctions. With the exception of the breezy bluegrass pop of “The Wind,” Uncaged‘s great lead single, Zac Brown Band hardly seems to play country music at all. Uncaged more closely resembles the central nervous system of a Midwestern freshman dorm circa 1998, somehow preserved and transmitted into musical form. If Zac Brown Band didn’t exist, summer-festival bookers would’ve had to invent it.