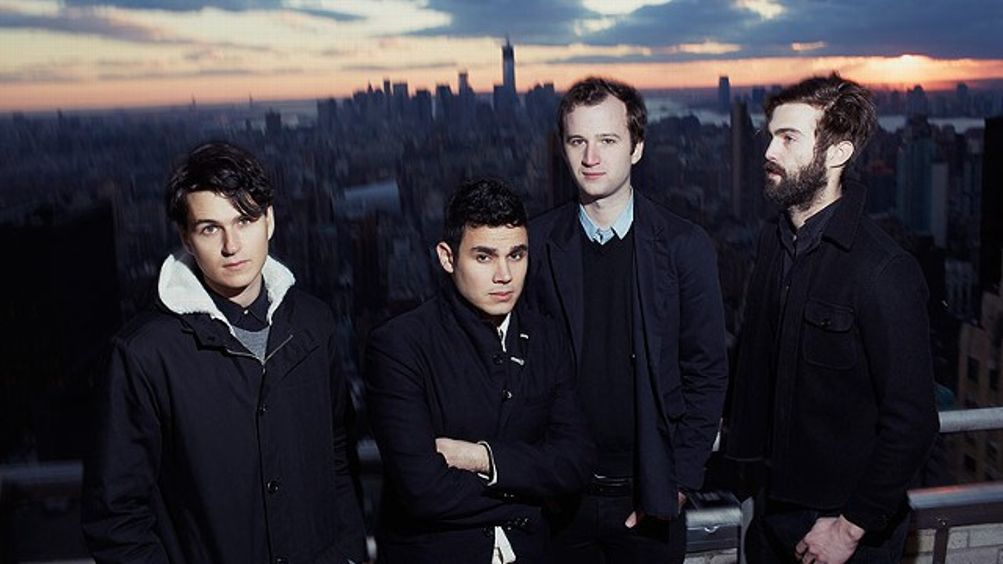 When we last left Vampire Weekend, an argument about the New York band’s artistic credibility was hacking up its last chunks of rhetorical phlegm. Here’s a quick rundown of pertinent scenes from the previous season for those just checking in: Critics charged Vampire Weekend, the Afro-pop inspired quartet, with heinous crimes such as “cultural appropriation” and “privilege.” Defenders countered with a non-defense defense: Of course Vampire Weekend unapologetically borrowed from world-music traditions and flaunted their Ivy League pedigrees; the band was addressing these class-based issues in its songs more adroitly than did its detractors. Indie rock in the early 21st century is about owning your preppy privilege (and not letting it own you) — Vampire Weekend has a lot to do with that.1 Plus: The songs on 2008’s Vampire Weekend and 2010’s Contra were catchy, and the lyrics were mostly funny-elitist (like a Whit Stillman movie) rather than elitist-elitist (like a Whit Stillman movie if you aren’t conversant with the upper-class milieu or the culture of the American Northeast).

Now that we’ve reviewed these talking points, it’s time to forget them. Vampire Weekend’s latest, Modern Vampires of the City (out May 14), defuses the conversation around the group’s first two albums by walking away from it completely. In the least showy way possible, Vampire Weekend has remade its sound and broadened its perspective on easily the best record of its career. Gone are the anal-retentive guitar lines, the Louis Vuitton references, and all that sweater-sporting Kwassa Kwassa business — in their place are carefully composed laptop-pop soundscapes built of simple piano chords and wide swaths of empty space, and lyrics that address the most universal subjects of all, love and death. (Specifically, how the former can help us understand the latter, and vice versa.) It’s a stunning turn that doesn’t seem like a stunning turn; Modern Vampires of the City marks the full flowering of Vampire Weekend’s talent, while sounding and feeling quite unlike anything that preceded it.

Vampire Weekend has described City as the “culmination of a trilogy”; if the band’s discography encapsulates a single night, this is where the party ends, the revelers exit the apartment, and the host sits alone at 3 a.m., his fears right where he left them. By fears I mean the fears: In “Diane Young,” singer Ezra Koenig expresses ambivalence over the value of earthly indulgences against the eternal cost. (Diane Young is an anti-aging salon in Manhattan; it sounds like “dyin’ young” when Koenig sings it in the chorus.) In “Unbelievers,” a calculation is made between fleeting love and “the fire [that] awaits,” and in “Don’t Lie,” Koenig motions to “the low click of a ticking tock / there’s a headstone right in front of you / and everyone I know.” He cuts to the chase in “Finger Back,” nervously exclaiming, “I don’t want to live like this, but I don’t wanna die.”

If all of this reads as a self-conscious stab at creating a mature, “dark”2 third record, that’s because it is. Few rock bands are more deliberate (or articulate) about their creative process (and thinking about how this process will be perceived) than Vampire Weekend. In interviews, Koenig displays a unique gift for making criticisms of his music seem stupid, just through sheer analytical logic. It’s unlikely that any assessment of City will be as well-reasoned and keen as the review Koenig probably already has written in his head.

I mean that as a compliment, by the way, especially since Vampire Weekend has now learned how to be smart without being “smart.” For City, Koenig reconvened with co-songwriter Rostam Batmanglij, and the duo composed the music on their own, away from the other two members of Vampire Weekend, drummer Chris Tomson and bassist Chris Baio, who were asked to record their parts later. (The other crucial collaborator was producer Ariel Rechtshaid, whose work with artists like Usher, Charli XCX, and We Are Scientists bridges the increasingly small gap between chart pop and indie rock that City attempts to definitively close.) Working outside the confines of a traditional band format has freed Koenig and Batmanglij to strip Vampire Weekend’s music down to the barest of essentials. In contrast with the busy arrangements that distinguished Contra, many tracks on City center on a vocal melody, unobtrusive keyboard accents, and a spare yet distinct rhythmic pulse. It’s a no-frills, grown-up musical approach for a purposefully “grown-up” record.

The standout “Step” typifies City‘s strengths: Lyrically, it might be the densest thing Vampire Weekend has ever done, piling on references to Angkor Wat, the ancient Greek king Croesus, Run-D.M.C.’s Tougher Than Leather, Modest Mouse, and Samuel Butler’s turn-of-the-century Victorian novel The Way of All Flesh. (Like all Vampire Weekend albums, City resembles a postgraduate Beastie Boys album.) Musically, however, “Step” couldn’t be more airy and light, though the backstory there is more complicated as well.3 It’s true that Vampire Weekend’s bouncy effervescence has been tempered; other than the boisterous rockabilly of “Diane Young” and the percussive “Finger Back,” the band has opted to ruminate rather than dance. There’s still plenty on City to parse and overanalyze — the apocalyptic “Worship You” nods to Nick Cave and the Bad Seeds’ 1994 classic “Red Right Hand,” and the gorgeous “Everlasting Arms” sneaks in a poke at the 13th-century hymn “Dies Irae.” But even at its weightiest, City never feels heavy-handed because the music has such a soft, elegant touch.

Now that the Graceland influence has receded (at least temporarily) from the band’s music, I’m guessing that Vampire Weekend’s new favorite Paul Simon album is 2011’s sublime So Beautiful or So What. On the album, the poet laureate of boomer-era vision quests initiates a late-night bull session with God that’s witty and conversational even as it fearlessly confronts the meaning of our transient existence. Like Simon, Koenig and Batmanglij see the Almighty in the mundane; for instance, in “Ya Hey” (as in Yahweh), a sighting occurs outside of a tent at a rock festival — “My soul swooned as I faintly heard the sound / of you spinning ‘Israelites’ into ’19th Nervous Breakdown'” — while the world burns beyond the gates. But witty, conversational lyrics are nothing new for these guys; what City has that previous Vampire Weekend albums don’t is proximity and heart. Koenig no longer plays the aloof observer in songs like “Hannah Hunt”; when his voice cracks in the final verse, as the wilted relationship he’s describing craters, it’s a sign that Koenig is finally as invested in the emotional lives of his characters as he is in obsessing over their wardrobes and travel itineraries. And the way Koenig opens himself on the chorus to the astounding “Obvious Bicycle,” letting his falsetto gently roll over the “so listen / don’t wait” refrain, is informed by a deep (and deeply affecting) real-life yearning for knowing the unknowable.

City‘s thesis statement — “Wisdom’s a gift / but you’d trade it for youth,” from “Step” — might be an enticing (though purely metaphorical) proposition, but a little extra mileage suits Vampire Weekend surprisingly well. If you found this band a touch too twerpy in the past — I certainly belong in that camp — City tones down the brashness of the previous releases while subtly suggesting that you might have judged them wrongly. (It’s a record you’ll have to work really hard to hate, in other words.) For a band that seemed to have it all from the moment it arrived, a humble display of vulnerability here and there works wonders. Vampire Weekend suddenly seems like a band you could grow old with, and Modern Vampires of the City a record that will mark time.