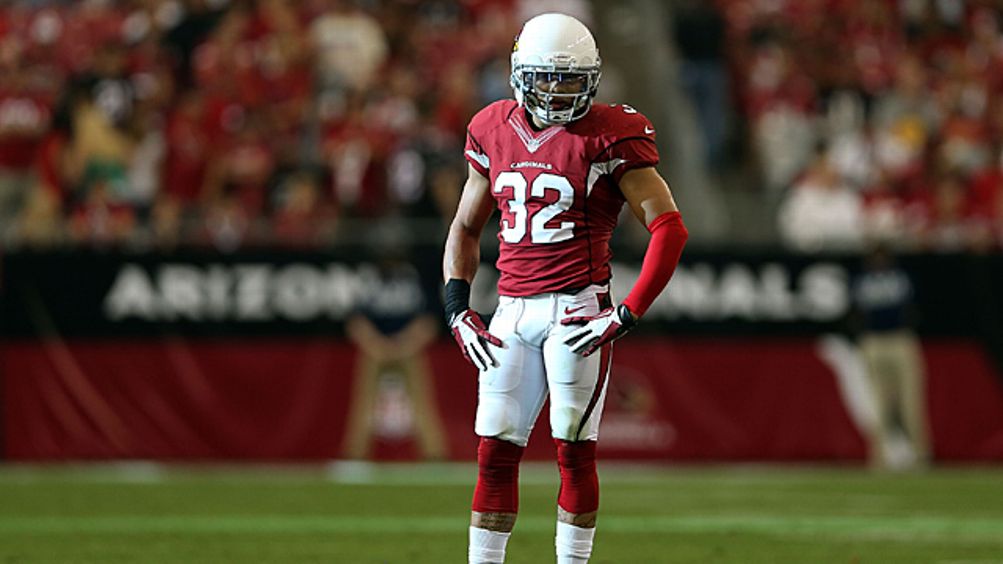 So anyway, you watch what the free safety does while he’s “in space,” and in this case, the play has gone completely in the other direction. This has happened because Arizona’s Tyrann Mathieu is having himself a season right now, and the team Mathieu and his Arizona Cardinals are facing — the Jacksonville Jaguars — would rather be staggeringly incompetent anywhere else but around him at the moment, thank you very much.

(Also, can we just, for a moment, take a bit of a side trip, since that’s clearly what the NFL did here, and wonder why in the name of the Decatur Staleys there’s an A-level professional sports team in Jacksonville in the first place? Was Peoria booked? Was there no room for a franchise in Saginaw? Green Bay is cute because it’s rooted in the mythology of the league. Foxborough’s an accident. But finding an NFL team in Jacksonville — much less finding the Super Bowl there, as it was in 2005 — is like putting an entertainment complex in, I don’t know, Branson freaking Missouri. Wait, that’s it. Jacksonville is the Branson of professional sports.)

“No question, they’re going away from me,” Mathieu said. “I’m starting to feel like [Arizona cornerback] Patrick [Peterson] out there. Game’s getting boring, you know? You just got to stay focused. Obviously, somebody’s going to try me out there. You know, Drew Brees tried me. Matt Ryan tried me … We got Andrew Luck next week. Hopefully he tries me. I’m just looking forward to making plays.”

Mathieu was the NFC’s Defensive Rookie of the Month in October, when — over the course of four games — he had 21 tackles, an interception, and a sack for Arizona. The Cardinals got suckered a couple of times early Sunday as Jacksonville tried what few gadget plays it has. (When you’re 1-9, as the Jaguars now are, it can be argued that an off-tackle play is a gadget, but no matter.) He’s small for a defensive back, but thick through the shoulders, which are topped by a head of the golden hair that was his trademark back in the days before his life turned upside down on him and he became a strange kind of commodity through which people worked out their own wishful fantasies of human failings and human redemption. On Sunday, he looked happy just to help his team win one of the most mundane football games in the history of the sport. (And I should know; I sat through the entire fiasco.)

It’s hard to believe that Mathieu doesn’t enjoy playing in space now, given what happened before the Cardinals took him with the 69th overall pick of last year’s NFL draft. A year ago, at LSU, he was that most awful of modern media confections — the cautionary tale. He was a legend first, and then he was a cautionary tale. Neither of those labels had anything to do with football, nor should they. Out on the field, with even the dead-assed Jacksonville Jaguars sending their offense anyplace but where he was, he looked like he was something very much like free.

A little more than a year ago, Mathieu was the Honey Badger, a 2011 Heisman Trophy finalist who was lined up for something like that again. Then, at the end of August, he got bounced from the team and left school after failing a series of drug tests. He went back to LSU as a student anyway and then, in October, he got busted for weed at an off-campus apartment and wound up in jail. And this, of course, is when Tyrann Mathieu, whose biological father went to jail for killing someone and whose high school years got blown out to sea by Hurricane Katrina, became a cautionary tale — a legend whose “character” got chewed over in a hundred newspaper columns and, worse, on all those clipboards held by all those assistant coaches who work for all those NFL teams.

(Of course, Mathieu’s place as The Defensive Player Who Could Win The Heisman was taken the next year by Notre Dame’s Manti Te’o, he of the imaginary girlfriend. Being TDPWCWTH seems to carry with it some very bad juju.)

The preposterous rebooting of Tyrann Mathieu’s life, and the new role he was forced to play in our national sports media pageant if he ever wanted a football career again, continued all the way up until the draft last spring, when the Cardinals waited until the third round to pick him. Here’s how an official NFL “media analyst” sized up the situation:

Mathieu’s character concerns dominated the discussion about him in the ensuing months, but then he turned plenty of heads with a better-than-anticipated performance at the NFL Scouting Combine. Mathieu must still address his issues with marijuana, of course, as well as the series of failed drug tests that reportedly led to his dismissal.

There probably is no point in mentioning that Mathieu’s “issues with marijuana” are shared by decades of college students, or that, sooner or later, the NFL’s idiotic drug policies in this regard are going to run headlong into state laws permitting the use of marijuana for medicinal purposes in places like, say, oh, I don’t know, Arizona. It’s a vain exercise to point out that Mathieu was no more a lesson for us after he got busted than he was a genuine legend before it happened. Now, though, he’s saying all the things he has to say so that the very strange world in which he works can maintain its very strange illusions about human behavior. He says those things and then he goes out and plays well, at least at the moment. To watch him in space is to watch him in a place that he has earned.

Even at LSU, Mathieu looked up to Patrick Peterson, a teammate in college and an All-American defensive back who got to the NFL and simply exploded, returning his first interception — against Philip Rivers of San Diego in a preseason game — and four punts for touchdowns, all as a rookie. It was Peterson who vouched for Mathieu, both as a player and as a person, and helped convince the Cardinals to draft him. Since Mathieu’s arrival, it has been Peterson who’s been a mentor and a valuable ambassador for Mathieu’s cause both within the locker room and without.

“He’s doing nothing but tremendous things for us this year,” Peterson said. “I’m always in his ear, telling him we can’t go to sleep. We can’t get bored out there because at any given time, any given play, they can catch a ball for 60 yards. We don’t want to be the guy that gives up that play and give them a life.”

What Peterson is more than anything else for Tyrann Mathieu is a lifeline to the kind of battered realism out of which NFL careers are made. Mathieu was made into a legend before he was ready. He was then made into a bedtime story for NFL sycophants to hear as they struggle into their Roger Goodell footie pajamas. He was something for everyone else, a kind of fungible emotional commodity before he’d ever been drafted, before he’d ever played a down. There is none of that with Patrick Peterson. There is none of it anymore with Tyrann Mathieu, who looks to have found a clean and fine place in the world where he finally has the space in which he can be himself.