OU vs. OSU: The Search for Squinky in Stillwater 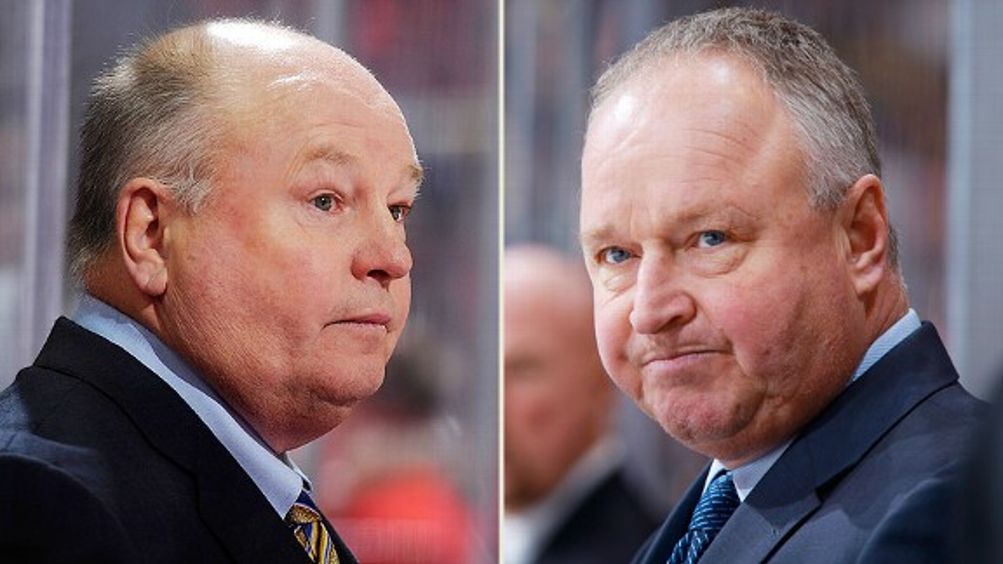 It all happened so fast. After kicking off this sluggish week after Thanksgiving by losing his job with the struggling Washington Capitals, it didn’t take long for the team’s former head coach, Bruce Boudreau, to become the unlikely protagonist of some modified Craig David jam. Fired on a Monday … looking for a drink on Tuesday … he was taking jobs by Wednesday …

The rebound gig was as far from his old one as possible: cross-country far, which meant that when he granted aw-shucks interviews to the Washington Post early Wednesday from “the living room of his Potomac home,” or to CSN Washington later that morning from his driveway outside, Boudreau wasn’t just being some sort of folksy, come-on-in chucklehead — he was probably smack dab in the middle of packing his bags for the late-afternoon flight to L.A.

About a half hour after the Anaheim Ducks finally won one on Wednesday night, beating Montreal 4-1 to earn just their second victory in 10 games, then-Ducks coach Randy Carlyle spoke with the media at the Honda Center, explaining that “my mandate is, now what do we do for the next one? Because the next one is coming in a hurry, and that’s the most important one to me.” He was referring to the team’s Friday game against the Philadelphia Flyers. A few minutes later, he walked to his office and found out he’d been fired by the Ducks’ GM, Bob Murray, the man who just a few months ago had signed him to a three-year contract extension.

“Randy has been invaluable to this club over the last six years,” Murray said then of Carlyle, who had coached the Ducks since 2005 and led the team to a Stanley Cup in 2007. “He has been a true leader through thick and thin, and we are very pleased to be able to reward him with this well-deserved contract.”

It was because of this contract that the conventional wisdom held that Carlyle’s job, while in jeopardy, was a bit more secure than some of the NHL’s other coaches, two of whom — Boudreau and Carolina Hurricanes coach Paul Maurice — had already been canned in rapid succession Monday morning.1 Adding to the idea that Carlyle would remain behind the Anaheim bench was the scuttlebutt that the frustrated Ducks had been “shopping Bobby Ryan,” a phrase I was unable to read without assuming there was some new CBS comedy and/or viral Clueless/chess YouTube mashup I needed to check out.

The Ryan rumors seemed almost too good to be true: A top 24-year-old winger who has averaged 64 points a season over the past three years was somehow on the market? The guy who did this in the playoffs? Yes please.

Twitter lit up with giddy trade suggestions from fans of the NHL’s other 29 teams, and Ryan himself seemed to all but confirm that a move would be imminent: “I wouldn’t be surprised,” he told the Orange County Register Tuesday. “That’s all I’ll say about that.” And when Ryan met with Carlyle on Wednesday to discuss the media frenzy, his coach advised him “to find that inner peace in himself to deal with it.”

All this time, as it turned out, Boudreau was basically waiting in the wings. When the Ducks announced that Carlyle had been let go and Boudreau had been hired,2 they also let slip that the new coach would be there to lead practice on Thursday: In fact, he was already in Anaheim, having arrived before the Montreal game even ended. The win had been a nice, if unwitting, good-bye for Carlyle, nothing more.

The hockey coaching carousel has always been logic-free. One person wrote in to my mailbag this week, suggesting that there be a televised coach-trading deadline to just make things that much more efficient. This week, though, it’s like the ride operator got drunk and smashed a few extra buttons on the console, making everything flashier, faster, and more loopy than usual. Boudreau’s unemployment is the shortest in the NHL’s history.3 His old team faces its rivals, the Penguins, tonight, which is always a circus even in the calmest of circumstances;4 his new team plays the Flyers on Friday, meaning that HBO’s camera crews will be happily in tow.

Boudreau was fired from a Washington team that, if the season had ended on Monday morning, would have been in the playoffs. It may seem bizarre to let a coach go when the team isn’t ostensibly doing that badly. But the playoffs were no longer the goal for the Caps — the Stanley Cup was. And when the team, which got off to a 7-0 start, began flailing and fuming beneath him, it became increasingly clear that his shots at instilling a stricter regime were clanking. You can’t go from being the fun homeroom teacher everyone loves to suddenly slapping students with rulers and sending them to detention for showing up late.

What you can do, though, is get a job at a new school and reinvent yourself however you want. That’s what he’ll get to do in Anaheim, and I’d be lying if I said I wasn’t extremely excited. At worst, we’ve got the colorful Boudreau right back in the league with an offensively minded and defensively questionable squad, and at best, he’ll find appropriate middle ground between being pal and police officer. Either way, there’s a good chance he’ll find kindred spirits in playful players like Ryan — who is ostensibly off the trading block for the time being — and captain Ryan Getzlaf, who has struggled mightily this year but who may benefit from the shakeup. (He already broke his 15-game scoring slump with a goal against Montreal.)

If I may just ask for one small thing, it would be this: If the two Ryans ever complete the important Gold-Silver trilogy, I want Boudreau in a cameo role. He’d be way better than Corey Perry.

With so much coaching upheaval going on, it’s worth noting that the St. Louis Blues, the first franchise to fire their head coach this season, have gone 8-1-2 since replacing Davis Payne with Ken Hitchcock. There’s much to love about the Blues, from the excellent goaltending they’re getting lately from Brian Elliott5 to the sweet moves of guys like T.J. Oshie to the outstanding defensive play from captain David Backes, who has been the only top center to hold Sidney Crosby pointless since The Kid’s return. Backes can score, too: Here’s a beauty no-look pass from Oshie to Backes. I love the shot of them watching the goal from the bench.

This summer the Carolina Hurricanes signed defenseman Tomas Kaberle to a three-year, $12.75 million contract. Like everything else for the Hurricanes this season, it has not gone exactly as planned. Once an All-Star defenseman for the Maple Leafs, the 33-year-old Kaberle was traded at the deadline last season to the Bruins, who had desired him for years and who, perhaps because of that, ultimately overpaid for him. Yes, they won the Cup several months later, but it wasn’t really thanks to Kaberle, who never quite fit into their system. Getting to the Cup finals actually made the trade worse for Boston: In addition to giving up 21-year-old prospect Joe Colborne and a first-round pick in 2011, the Bruins also lost a conditional second-round pick in 2012 that was triggered by them facing Vancouver.

This season Kaberle has been good for just five assists in 24 games, but the past week has been particularly rough. He was a healthy scratch against the Ottawa Senators on Sunday, and it didn’t appear to have pumped him up much. In Carolina’s game against Florida on Tuesday night, he had, among other things, a defensive-zone turnover that directly led to a Panthers goal. GM Jim Rutherford is looking to trade him, but it’s difficult to imagine what, at this point, he’d really be able to get in return — particularly after a misguided bit of salesmanship in which he publicly warned: “Tomas Kaberle better pick up his game or he won’t be in Carolina long.”6

HBO released a 12-minute infomercial of sorts for their upcoming Rangers-Flyers version of 24/7, and already the trash-talking has begun, with the Flyers’ Jody Shelley — who briefly played for the Rangers before moving to Philly — saying: “Brandon Dubinsky plays like a little weasel.”8

In most reality series, the first season has an innocent and experimental quality, while subsequent seasons become far more self-conscious and meta. That already seems to be the case here: Dubinsky was asked about the weasel comment by reporters after one Rangers practice. “First of all, if I was him, I’d keep my mouth shut if I don’t play, especially since I never see him on the ice,” he responded. (Shelley has played in fewer than half of Philadelphia’s games this year.) “He’s usually just yapping from the bench, and I guess now he’s yapping from behind the video camera. So that’s about all I have to say.”

He lied. There was more. “It won’t be long before he’s out of the league, because he’s a terrible player,” he said.

“The Yablonski Rule”
Is all that can defeat the
KHL Goon Squad.

Previously from Katie Baker:
Broadway Blueshirts Are Becoming Must-See Theatre
Manning-ology, Lady Byng, and the Pitfalls of Great Free Tickets
The Best Team in the NHL
Wedded Blitz! The October Marriage Season
The Rise of the Female Distance Runner
Benching Ovechkin
The Horrible Habs
Coming to Grips With the Winter Classic
The Endless Battle Over Hockey Fights