Counting down the fantasy 40

Editor’s note: This article appears in the Sept. 12 issue of ESPN The Magazine.

On Sept. 22, 1987, NFL players went on strike for 24 excruciating days. Somehow, we’ve managed to block this appalling event from our memories, the same way you suppress making that sappy mix tape for someone who dumped you a few weeks later. But fact is fact: the strike happened. Two games into the season, the players walked, owners hired replacements, networks were forced to televise scab games and gamblers were forced to wager on them. When the real players returned in late October, those scab games counted in the standings, keeping the loaded Giants — the defending Super Bowl champs — out of the playoffs. 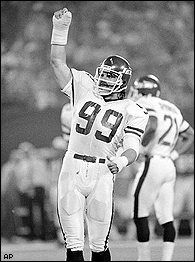 Looking back, I can count only three good things that came out of the grisly event. First, a picketing Jet spit on line-crosser Mark Gastineau through his car window, which led to Gastineau chasing the guy down for his first sack in about three years. Second, the Patriots traded for local legend Doug Flutie, followed by Flutie leading them to an exciting victory over the Oilers that was the highlight of the season (and, unfortunately, the next six). And third, the strike eventually inspired a ridiculous Keanu Reeves movie, “The Replacements,” which remains one of the great Bad Sports Movies of the past 25 years. Not much, but something.

Here’s my point: imagine if a strike happened today. In 1987, the strike was depressing, no question. But back then the NFL wasn’t the NFL yet. Baseball was still the national pastime. Bird, Magic and MJ had us wondering if the NBA would be the world’s biggest sport. Even soccer was in one of its hype cycles, once again proclaimed as the sport of the 21st century.

Well, guess what actually is the sport of the 21st century? NFL football. Between its katrillion-dollar TV contract, gaudy ratings and merchandise sales, steady sellouts across the country and an unparalleled playoff system that culminates in the most-watched telecast of the year, the NFL today is the alpha dog of pro sports. Want to watch football games until your eyes bleed? Just order Sunday Ticket on DirecTV. Like to gamble? The NFL would never condone such a shady habit, but it helpfully provides detailed injury reports, fines coaches who hide injury news and looks the other way as spreads are listed in newspapers. Into fantasy sports? No sport makes more fantasy sense, and not just because you have to keep track of your guys only once a week. Best of all, you know the players are giving 100 percent because it’s the only major sport without guaranteed contracts.

The NFL is the perfect product for the Short Attention Span era. On Sundays, you can watch 11 straight hours of games, with your remote control in overdrive, three screens open on your laptop (one for your fantasy league, one with an updating NFL scoreboard, one for your Caribbean account) and a cell phone at your side so friends can call to say, “Next time I decide to wager on Plummer, shoot me in the head.” Or, “Tiki just got tackled from behind on the 2. Third plus-50 TD I’ve lost today.” During the week, you can surf the Net for fantasy info, TiVo NFL Live and PrimeTime and read local newspapers from anywhere in the country.

And you can always find someone to talk football with. In fact, I no longer trust guys who don’t follow the NFL (or, for that matter, sports columnists who don’t follow the NFL). I feel like there’s something wrong with them. Why wouldn’t you have a fantasy team? It’s like being the only kid in sixth grade who doesn’t play video games. When my buddy Sal and I got together recently for a six-round mock draft for our fantasy league — that’s right, a mock fantasy draft — the only surprise was that we didn’t go 18. Honestly, we would have if we’d had enough time.

Which gets me back to my original point: The NFL is the only sport that matters anymore. If any other league disappeared for a few weeks, or even months — like, you know, the NHL — some small percentage of diehards would feel disenfranchised, and I’m sure there would be a general level of sadness and unrest. But if the NFL were to replicate that deadly 24-day strike this October? There’d be riots. Fans would infiltrate practice sites to flip over Explorers and Hummers. There’d be the most hostile talk-show rhetoric this side of Rush Limbaugh, maybe even death threats. The president would have to intervene as a matter of national security. Eventually, the two sides would agree to a new deal, if only to ensure the nation’s welfare.

And so I say to the National Football League, our new American pastime, the undisputed champion of professional sports: May you never strike again.

(Please. For the love of God.)