The Road to Perdition 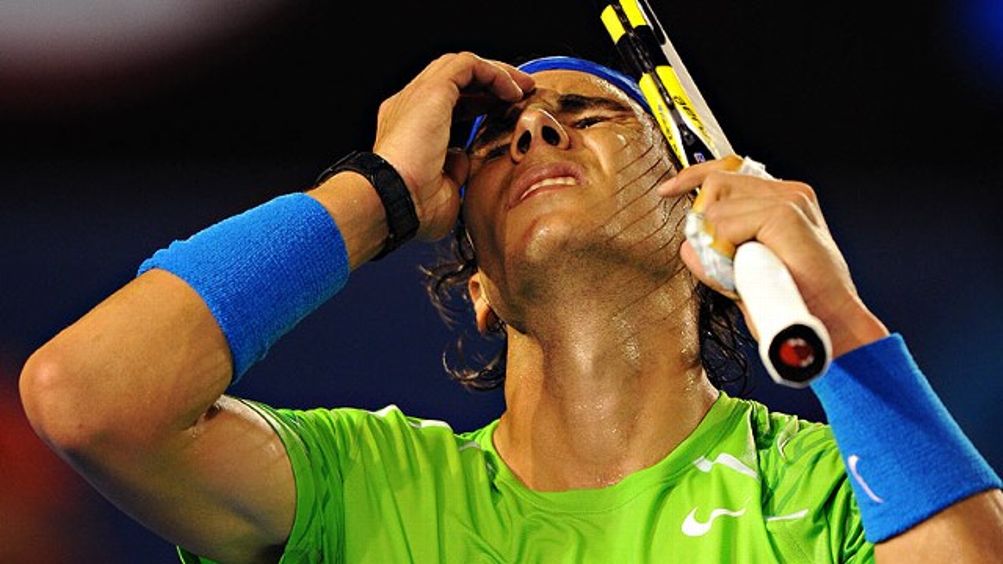 You have just played the match of your life, or one of them, one of the many matches of your life, in the Australian Open final, where you fought back from the brink of defeat against one of the most dominant athletes on Earth. You fought for almost six hours, clawing at chances, screaming at yourself and scowling, until your opponent, who never shows weakness, visibly started to weaken. While he gasped for air and crumpled to the ground after rallies, you somehow got stronger. (But then, that’s what you always do: You get stronger.) The power of your ground strokes, as measured by their average speed, was higher in the sixth hour of tennis than in the first. You broke the unstoppable champion early in the fifth set. The crowd believed in you. You had control of the match. And then, in a way that managed to seem both impossible and unsurprising, the champion got a second wind, and you lost.

How must it feel to be Rafa Nadal today? The cruelest thing about this glutted golden age of men’s tennis is that it keeps producing astonishing matches, matches that actually expand your idea of what sport can be, and someone has to lose all of them. We’ve seen Roger Federer, probably the most effortlessly brilliant tennis player who ever lived, shattered and weeping on the court after losses that seemed to groan up from the Old Testament.1 We’ve seen endless variations on “Andy Murray having his heart handed to him,” to the point that his career increasingly seems to be in the hands of some demented opera composer. Murray’s five-set loss to Djokovic in the semifinals last Friday was clearly both the best match and the most painful moment of this year’s Australian Open — or it seemed that way, until we saw Nadal play a match for the ages and still lose to Djokovic on Sunday.

Six hours! It was the longest Grand Slam final ever, a match that felt like old-school naval warfare, just two ships cannonading each other until they both started to sink.2 Losing a final like that should be a bigger honor than winning the tournament under less amazing circumstances. But that isn’t how it works. After the match, the commentators instantly started eulogizing Djokovic — how much he’d proved, how much he’d learned about himself — while agreeing that Nadal might need months to recover from the spiritual devastation of the defeat. You win, in our sports culture, or you’re not a winner. That’s the consequence of one slightly mishit down-the-line backhand in a six-hour match. How must it feel to be Rafa Nadal today?

Until this tournament, I never fully realized how much Nadal means to tennis. I knew he was a great player, obviously. But I’m a goner for Federer, and Nadal has often felt to me like an infuriating obstacle, a berserk dervish with the demonic power to out-frenzy Roger’s grace and lucidity. His tennis was a bludgeoning adrenaline rush, a Ramones song that lasted four hours. Had he never been born, Federer would have won the 20 majors he seemed destined for in 2007. I admired what Nadal had done, and I loved the insanity at the top of the men’s bracket. But deep down, in some atavistic corner of my sports fan’s heart, I kind of wanted him gone.

One of the great things about this era of the game, though — it goes along with the cruelty we were just talking about — is that it feels almost epic. That’s a word that gets thrown around a lot in sports, but I mean it literally here. Think about, say, The Iliad. It’s a book about combat, about wild golden armies tearing each other to shreds, but here and there in every battle there are heroes whom no one can touch. Hector and Achilles and Ajax and the other superheroes of the B.C.E. basically wade through the enemy, mowing down everything in their path. They’re not even in danger. There’s absolutely no chance that some minor Trojan is going to bring down Achilles; it’s not happening. And after hundreds of pages of this, when they finally start facing each other, you can’t freaking believe how intense the moment is, because you’ve been primed to think they’re invincible.

Isn’t that basically the state of tennis today? Federer, Nadal, and Djokovic have won every major tournament but one3 in the last seven years. The occasional Jo-Willie Tsonga crack-up aside, those three and Andy Murray are practically guaranteed to meet in every semifinal. They spend the early rounds of the tournament scything down ranks of lesser players, and when they finally play each other, you can’t freaking believe how intense it is. They’re all larger than life.4 They all seem essentially invincible.5

What I realized during this Australian Open is that Nadal sets the tone for this state of affairs more than anyone else, certainly more than Federer. Roger is so cool and frictionless that, most of the time, he seems less like a prism of epic intensity than a dispassionate analyst of it.6 Djokovic, since his ascent, has been so much better than everyone else that he’s largely been able to act like a careful clinician, the administrator of his own talent. And Murray has lost to the other guys so often that his anger and frustration seem basically inconsequential. In other words, the game may be epic for the fans, but you won’t always catch that ground note of holy-shit intensity if you only watch the other three players. Left to themselves, they don’t exactly project deep contact with the secret fires of time.

Nadal, though? He plays like he’s fighting giants. It’s not just the sneer, or the muscles, or the hair, or that forehand — you know, the one where he swoops the racket all the way around his head like he’s whipping the team pulling his chariot. It’s also that frantic tenacity that used to drive me so nuts. Federer seems devastated when he loses but he also seems to sense losses coming and accept them before they arrive. When Nadal falls behind, he turns the match into life and death. He gets mad. He hesitates less. He hits the ball harder. He doesn’t look sad or scared. He looks defiant, and he plays like he’s possessed.

As a result, he carries matches to a higher plane than they have any business reaching. Djokovic could and should have won the Australian final in four sets, but Nadal refused to surrender, played lethal tennis, and took Djokovic to a place he’d never been. Instead of notching a routine victory, Djokovic had to tap into the same well of inspiration that Nadal was already drawing from. You could say that all these guys have learned what it means to fight on the plains of Troy because Nadal does it in every match. And we see him do it, so we know what it means, too.

Of course, the terrible thing about tennis, as opposed to mere epic warfare, is that you have to do it again next week. Ultimately, I think what’s clued me in to Nadal’s greatness is that, ever since Djokovic’s rise, he plays this way and still loses. Our sports culture may value winning over everything, but there’s nothing more epic than tragic defeat. There’s a moment in David Winner’s book Brilliant Orange, a history of the Dutch national soccer team, when one of the players from the immortal Dutch squad of the ’70s — the group that finished second at two straight World Cups — describes his team as “second but imperial.” No one in sports is more imperially second than Nadal right now.

But is that any consolation? How does it feel to die at the end of the book, this many times in a row? I mean, think about it. You spend years in the shadow of your rival. You never stop working or believing. Finally it all comes together: you surpass him. For a year, maybe two, you win everything. You turn the game upside down, and your bottomless reserve of will makes you seem unstoppable. All the records are going to fall.7 Then, more or less suddenly, a guy you used to beat comfortably surpasses you. Long before your reign was supposed to end, you find yourself overshadowed again. You lose five straight, six straight, seven straight to the new champion, all in finals, three of them in majors. You’re 25, in what should be the peak of your prime as an athlete, and you’re right back where you started. It turns out that your relentlessness isn’t an unstoppable force. But — precisely because you have it — you keep going as if it is.

But how does it feel?