Bobbito Garcia on His Old Radio Show and New Film 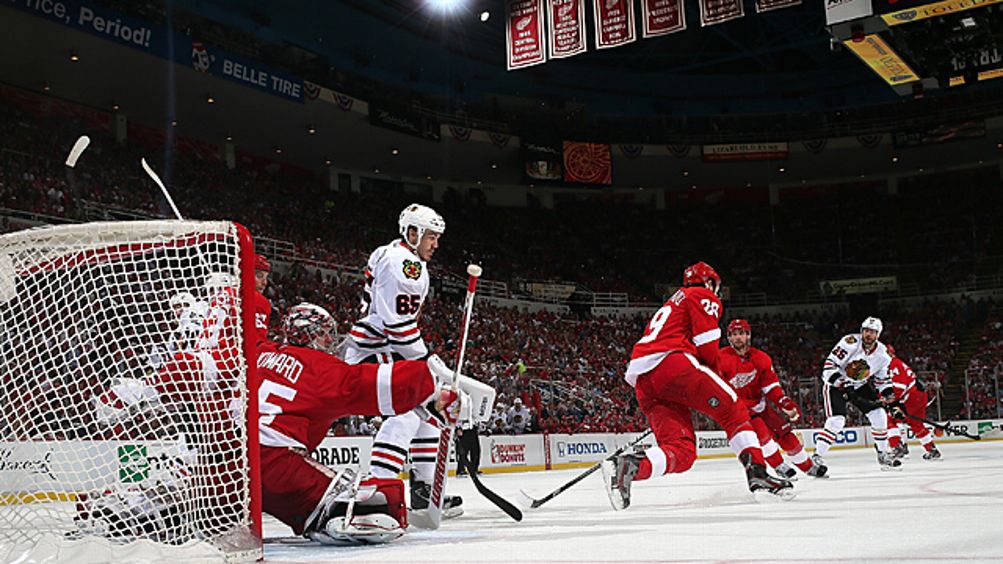 You all know you’ve felt it some time or another: that inevitability, that escalation, that avalanche that we know as momentum. Maybe a big save led to a breakaway led to a three-goal run. Maybe a floundering team that was down in a series suddenly rattled off back-to-back wins to, as they say, “stay alive.” Maybe you’ve stood in the stands and just known that something special was going down around you. You know momentum exists. The question is just how much of it your team can have.

Oh. Sutter isn’t the only one to make this point, either; Rangers coach John Tortorella frequently bristles at suggestions that the results of one game carry over to the next. Indeed, when you start thinking about it you realize that momentum is as fickle as fashion: One day you’re embracing it, and the next day you’re its victim. (It defies logic, too: In last year’s Cup finals, the New Jersey Devils “had the momentum” at one point, having taken Games 4 and 5 — but if momentum really existed, shouldn’t the Kings have swept?)

The other day the NHL released a compilation of miked-up sound bites from first-round games, and while they’re obviously just random snippets and don’t add up to anything in particular, I do think they underline that the game, while it is played, is free from the narratives we assign it from the outside. It’s just guys trying to stay on their man, or rile someone up, or get open for a pass, or convert a set play. It’s not people talking about momentum or pressure or the impact of Game 1 on Game 4.

Anyway, what this all means is that we can’t profess to know that the Detroit Red Wings, up two games to one on the Chicago Blackhawks, will “keep the momentum going” any more than we can predict whether the San Jose Sharks will “grab the momentum away” from the L.A. Kings. What we can guess, with reasonable certainty, is (1) that no one will ever use the word “momentum” in the same sentence as “New York Rangers power play,” and (2) most or all of these series will at multiple points feature what will be considered “big momentum swings.” Most of them already have.

In this week’s power rankings, we look at which series have the greatest potential for this sort of change in fortunes, imagined or not. Which currently trailing teams have the best shot at coming back to win their rounds?

Welp, so much for that “Chicago in five” call! Hey, at least I’m not this guy. I was not alone in thinking that the Blackhawks would overpower Detroit following the Wings’ seven-game series against Anaheim (and their late-season battle to get into the playoffs in the first place). But several of the things that were figured to be advantages for the Blackhawks, from scoring depth to discipline, have instead gone the Red Wings’ way.

In Games 2 and 3, the Red Wings outscored the Blackhawks a combined seven to two. Patrick Kane produced both goals for Chicago, while seven different players scored for Detroit. They ranged from the usual suspects — Pavel Datsyuk’s Game 3 goal on Monday night was nearly identical to one he’d scored in the first round — to the youngsters. Twenty-four-year-old defenseman Brendan Smith netted the Game 2 game winner, while in Game 3 it was 23-year-old Gustav Nyquist who opened scoring with a goal that looked like something you’d typically see from someone like Kane.

Detroit’s Game 3 win was the 77th playoff victory for Mike Babcock, tying him with Chicago coach Joel Quenneville atop the leaderboard of active coaches. And while he can be a tough customer, Babcock’s style has been invaluable in leading a team that iced six rookies (and Damien Brunner) this season, as Yahoo’s Nick Cotsonika points out.

Meanwhile, Jonathan Toews has been snakebitten and increasingly frustrated by the Wings’ Jonathan Ericsson. A reported disagreement between Viktor Stalberg and Quenneville became public when Stalberg was scratched for the start of the series. And the Hawks seemed to lose their composure a little in the third period of Game 3, taking five penalties to Detroit’s zero.

“It almost takes something like this,” Toews said after the 3-1 loss. “Or maybe someone to slap you in the face, so to speak, to really understand what adversity is and how tough the playoffs can be.”

Unlike the other two teams that trail playoff series 2-1 at the moment, the Blackhawks have the disadvantage of playing Game 4 on the road. But this also means that, should they manage to even up the series, they’ll have home ice in the pivotal Games 5 and 7. As surprised (and humbled!) as I’ve been by the performance of the Red Wings, I still give the Blackhawks the benefit of the doubt after their regular season, and think they have the best chance to ultimately advance.

I’m ranking this second out of a sense of wishful thinking, because it’s the series I most want to go to seven games. You have the emerging stardom of Logan Couture and the chance for a rare repeat run by the L.A. Kings. There’s the play of two excellent goaltenders in Jonathan Quick and Antti Niemi. And the series has been incredibly close. Game 2 featured a crushing Kings comeback, but the Sharks battled back in much the same way in Game 3, thanks to Couture. It was the 19th overtime game of the playoffs, and the fifth to be won on a power play.

“In my opinion, he’s probably the leader of this team,” Sharks veteran defenseman Brad Stuart said Saturday night after Couture returned to the ice from an in-game knee injury and scored in overtime to give the Sharks the 2-1 win at home. “To have him come back was huge and just a boost to the guys mentally.” (It was also the perfect fodder for this pretty hilarious hero montage on NHL.com.)

Losing Raffi Torres for the series thanks to a hit on Jarret Stoll was a big blow for the Sharks, whose GM, Doug Wilson, vehemently argued against the suspension (and was promptly fined $100,000 for the trouble). Still, both teams are fast in transition but fierce along the boards, and the physicality of the series continues to ramp up. And with two deep teams facing off, some of the matchups — like Joe Thornton against Jeff Carter and Mike Richards, or Dustin Brown battling Joe Pavelski and Patrick Marleau — are a hockey fan’s dream. Let’s just hope we don’t wake up from it anytime soon.

3. No. 1 Pittsburgh Penguins vs. No. 7 Ottawa Senators

The media covering the Penguins-Senators series must be used to being kept waiting by now. Penguins head coach Dan Bylsma was late to a scheduled morning presser on Sunday. The reason? He couldn’t tear himself away from the bronze-medal game at the World Championships, which the U.S. won in a shootout. (Bylsma will likely be on the coaching staff of Team USA during the Sochi Olympics next February.)

Later that night, Daniel Alfredsson made them wait when he tied up Game 3 at 1-1 with just 29 seconds left on the clock to send it to overtime and jump-start the series. Ottawa goalie Craig Anderson made them wait longer still, denying a flurry of Pittsburgh Penguins chances and forcing a second extra stanza.

Finally, Ottawa Senators forward Colin Greening scored his third goal in as many games against the Penguins and gave the Senators the double-overtime win, narrowing Pittsburgh’s series lead to 2-1. And even he made reporters wait, though he had a good excuse: The doctors were busy pulling shards of fiberglass out of his cheek. Everyone understood.

The Senators call themselves “pesky,” a word beloved by young, striving hockey teams who apparently use Ramona Quimby as a successful model. (I seem to recall the St. Louis Blues and Dallas Stars proclaiming themselves “pesky” as well.) What they’ve accomplished this season is remarkable, and they are in a position of not having too much to lose. The Penguins, meanwhile, are feeling the myriad pressures that come with sky-high expectations. Their use of Jarome Iginla is being questioned. Their goaltender situation feels uneasy. People are snapping at one another over Brandon Sutter on Pittsburgh radio.

On the other hand, there’s Sidney Crosby, a study in contrasts. With his slurred speech and his Space Jam helmet (he’s transitioned to a slimmer model, but it’s still distinctively Martian), he’s as clunky as can be. But when the puck hits his stick, everything else falls away. Or at least it seemed to during Game 2 on Friday when he scored three quite different goals and chased Anderson from the net.

In moments like that, you think the Senators have no chance of winning this series. Then Alfredsson scores in the next game, followed by Greening, and you wonder if you should wait just a little bit longer.

Everyone knows about New York coach John Tortorella’s reputation of having a bit of a temper. But as with many famous hotheads, it’s when he turns kinda nice that you know you might really be in for it. “There’s no give in this team,” he said Sunday after the Rangers went down two games to love against the Boston Bruins. And on Monday, he added, “I’m very optimistic as far as where we’re going as a team. I’m looking forward to Game 3.”

The Bruins beat the Rangers 3-2 in overtime of Game 1 on Thursday before blowing open a 5-2 win on Sunday afternoon. And while Tortorella said that he was “encouraged” that several Bruins goals were the result of fixable defensive miscues, the fact remains that the Rangers missed a big opportunity to steal a game in Boston while the Bruins were down a trio of injured defensemen, including Dennis Seidenberg. Instead, it was Boston call-ups like Torey Krug who took full advantage of the situation: Krug scored twice and added an assist in the first two games of the series. (He’s played so well that everyone wants a piece of the credit.)

And then there’s the Rangers power play, which stinks with or without Carl Hagelin. No team has spent more time on the power play during the postseason than the Rangers, who have just two goals to show for 36 opportunities. In Game 2 against Boston, they were outshot 2-0 by the Bruins during one man-up chance. And while the Bruins’ PP isn’t much to write about, either, they’re at least getting enough pucks in the net at even strength. With eight goals in the first two games — several of which have come on streaking rushes — the Bruins have even managed to cast doubt on the normally solid Henrik Lundqvist. (Boston’s 3-2 overtime win in Game 1 gave him an all-time playoff OT record of 3-11, while no team had scored five on him in the playoffs since 2009.)

I thought the Rangers would make adjustments from the first round and surprise people in this series, but so far it seems like Boston is the team showing off what it has learned. (Maybe Brad Richards should be joining Jaromir Jagr in those late-night arena skates.) “We realize we let [Toronto] back in it,” Brad Marchand told ESPN.com’s Katie Strang on Monday about their opening series. “We didn’t have that killer instinct … we want to step up and do the job.” And that’s the best way to deal with the existential question of whether momentum exists: Just make sure it can’t.