Roll of the Daisuke

From Celtic pride to Celtic shame

Editor’s note: This column appears in the April 23 issue of ESPN The Magazine.

If ESPN ever creates a channel called ESPN Anti-Classic, I hope it launches with a telecast of April 4’s stink bomb between Milwaukee and Boston. Ever seen opponents basically shave points at the same time? Well, it happened. Already playing without Andrew Bogut and Charlie Villanueva, Milwaukee shelved Mo Williams (“sore knee”) and Michael Redd (“sore knee”) in a desperate bid to blow the game for lottery position. And it would have worked, but they sorely underestimated an always-say-die Celtics team missing Paul Pierce (“sore elbow”) and Al Jefferson (“hog-tied to a radiator”). Milwaukee lost by winning; Boston won by losing; every paying customer lost, period. 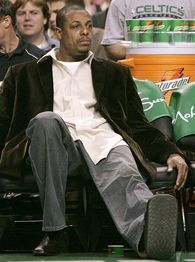 It’s a phenomenon unique to the NBA. With 30 teams and only a handful of superstar prospects per decade, landing Greg Oden or Kevin Durant really is like winning the lottery. You’d be foolish if you didn’t try to swing the odds in your favor, even if that means exaggerating injuries, giving crunch-time minutes to scrubs and disgracing the integrity of the game. When Charlotte’s tanking plans were recently dashed by 12th man Walter Herrmann — who improbably ignited a few upset wins — I half expected them to hire Shane Stant to attack Herrmann after a practice, followed by Walter rolling around like Nancy Kerrigan, screaming, “Why? Why???”

Two months ago in this space, when I introduced the concept of “fantanking” and rooted for an Oden-inspired Celtics collapse, I swear, my heart was in the right place. For the greater good, and under the current rules, the Celtics needed to lose and keep losing. And that’s what happened. At the same time, I can’t imagine the NBA feels good about a system that encourages fans to turn on their own teams. Remember, the league created the lottery in 1985 to prevent tanking. After six years of tinkering, it settled on a system of weighted Ping-Pong balls, until Orlando landed back-to-back No. 1 picks (defying 66-1 odds the second year). Panicking, the league significantly increased the odds that bad teams would finish in the top three, inadvertently leaving the door open for tanking again.

In retrospect, though, what’s worse: Tankapalooza 2007 or a young team winning two straight lotteries? Did it negatively impact TV ratings, attendance or general fan interest to have a suddenly stacked Magic team? Were you turning off your TV in the mid-’90s because Shaq and Penny were on? The NBA’s crucial mistake was forgetting that it’s better to have more quality teams, even at the expense of a few extra doormats. This isn’t the NFL; parity can’t work. Remember the late ’70s and the deadly stretch of seasons after the NBA/ABA merger? Everyone thinks play suffered because of rampant coke use and the first wave of overpaid/underachieving superstars, which was partially true. The bigger problem? The merger loaded every team’s roster to the degree that nobody could stand out. From 1977 through 1979, only six teams won more than 50 games, only six won fewer than 30, and nobody won more than 58 or fewer than 22. What’s fun about that?

On the flip side, when the Lakers, Celtics, Sixers and Pistons were battling for control of the 1980s, did anyone care that the Clips, Cavaliers, Warriors and Kings were dreadful? Was it a coincidence that the NBA peaked from 1987 to 1993, with a lopsided league of quality teams and crummy teams? Call it the 600/400 Rule: More teams finishing above .600 (50 wins or more) and under .400 (50 losses or more) makes for a more entertaining league. During the glorious ’88 season, my choice for the greatest ever, there were eight plus-.600 teams and six sub-.400 teams in a 23-team league.

During another superb stretch, from 1991 to 1993, there were 24 plus-.600 teams and 24 sub-.400 teams (two-thirds of the league). Again, that’s a good thing. We want to watch good teams with star players. The more the merrier, right? Just look at this lackluster 2007 season, when we’re saddled with six plus-.600 teams, five sub-.400 teams and 19 in-the-middle teams. Sure, it’s more difficult to improve because of the salary cap and luxury tax, and it’s nearly impossible to snooker other GMs (even Isiah has wised up). But I blame the lottery for foisting modified parity on us. Ever since Orlando went back-to-back, top picks have gone to lousy teams every spring, creating a vicious circle in which the lottery replenishes weak teams with blue-chippers who aren’t ready to carry weak teams. In the past 14 years, only one No. 1 pick made his team instantly competitive: Tim Duncan, who joined a contender that had slipped only because of injuries. Looking back, was it bad that Duncan and David Robinson played together? Was the NBA’s competitive spirit compromised? Of course not.

And that’s why the lottery sucks: Not only does it render the occasional Duncan/ Robinson pairing nearly impossible, not only does it reward poorly run clubs like the Hawks (103 games under .500 since the 1998-99 season), it encourages also-rans to bottom out once they suffer some bad luck because they know it’s their best chance to eventually contend. So can’t we admit that the lottery system has failed? Shouldn’t the element of luck play a bigger role than it does?

Anyway, here’s my solution:
1. Contract the league to 27 teams and dump Memphis, Charlotte and Atlanta, three cities that can’t support NBA basketball and never could. Then we’ll have a league-wide lottery to determine positioning for the dispersal draft of players from those three teams. (Note: We’ve already sedated Chad Ford just in case this happens.) And if a contender like Chicago happens to end up with Pau Gasol … I think we’ll manage.

2. Change the lottery back to that of the late ’80s: one envelope per team, same odds for everybody, top three draft spots only. Boom! We’ve solved the tanking problem. If a half-decent team happens to land a franchise player, like the Wolves getting Oden and pairing him with KG … I think we’ll manage.

3. Shorten the regular season by four games, guarantee the top six seeds in each conference, then have a double-elimination tourney for the seventh and eighth seeds between the remaining 15 teams. I suggest this for five reasons. First, it would be entertaining as hell. In fact, that’s what we’ll call it: the Entertaining-as-Hell Tournament. Second, I’m pretty sure we could get it sponsored. Third, the top 12 teams get a reward: two weeks of rest while the tournament plays out.

Fourth, a Cinderella squad could pull off some upsets, grab an eighth seed and win fans along the way. And fifth, with the Entertaining-as-Hell Tournament giving everyone a chance, no team could tank down the stretch without insulting paying customers beyond repair. That’s the lamest thing about tanking: not that it’s morally unsound, but that fans pay full price to see a depleted group of losers with dubious intentions. At a recent Bobcats-Celtics game, my father (a 34-year season ticket-holder) watched Boston toss away a double-digit lead while Pierce and Jefferson watched from the bench. To his right, a fan screamed at Doc Rivers, “You’re doing the right thing!” To his left, another fan screamed that the collapse was “an absolute disgrace!” And as my father told me later, the disturbing thing was that both guys were right.