President Obama on the College Playoff and NFL Concussions 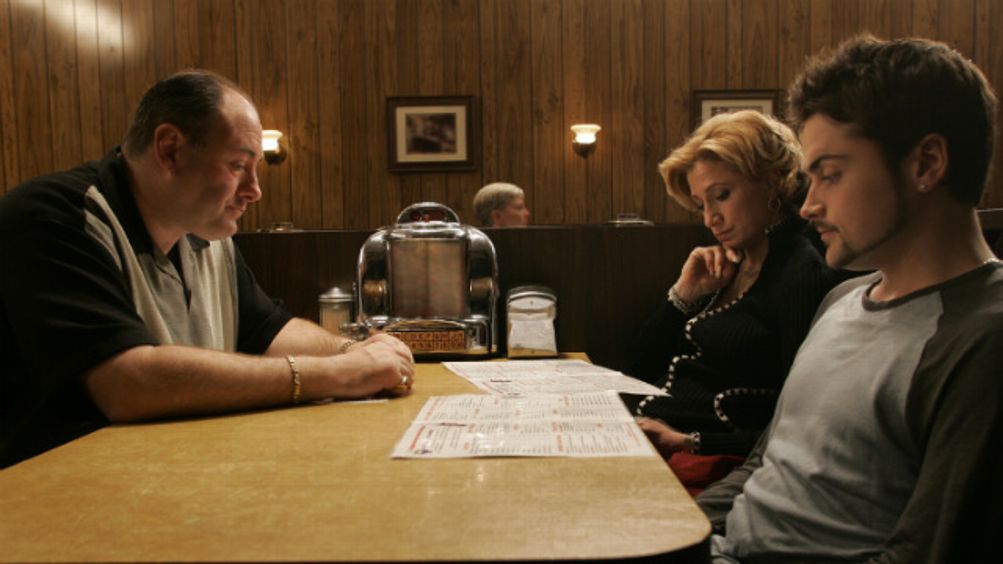 This much is certain regarding the last-known whereabouts of the most iconic television character of the early 21st century: He was sitting in a restaurant booth, eating onion rings. His wife, Carmela, and son, A.J., sat with him and his onion rings as a mysterious man in a Members Only jacket walked by the booth and into a nearby bathroom. The song playing on the jukebox was Journey’s “Don’t Stop Believin’.” Our last look at Tony Soprano — the father, son, brother, and New Jersey gangster who fought, with cold ambivalence, a losing battle for his own soul over six seasons of HBO’s The Sopranos — came in the song’s final 30 seconds, right in the middle of Steve Perry’s second-to-last repeat of the chorus. After that … it all went black, cutting off “believin’.”

This June will mark the fifth anniversary of “Made in America,” The Sopranos‘ series finale written and directed by the show’s curmudgeonly creator, David Chase. In some ways it seems much, much longer ago. In 2007, “Made in America” became an instant pop culture touchstone; for a while, it was the “Yeah, baby!” of TV episodes, with spoofs appearing everywhere from Family Guy to The Celebrity Apprentice to a stilted Hillary Clinton presidential campaign video. Today, it’s arguably been usurped by Lost as shorthand for “great show with a polarizing, not wholly satisfying denouement” in our discussions about contemporary television.

Compared with film or music, where the past is such a constant presence that freaking silent movies can come back again and the most successful pop album in many years sounds like it was recorded in 1971, television truly is short-attention-span theater. The medium is continually eating itself. There’s a whole generation of acclaimed programs — Mad Men, Breaking Bad, Louie, Justified, Parks and Recreation, Homeland, The Walking Dead, and Community — that weren’t even on when The Sopranos left the air. Everyone who loves TV agrees that The Sopranos is a great, important show. But it’s already part of a different era; the preoccupations with psychiatry, dream sequences, and kids who listen to Slipknot seem a little dated. If recent TV history tells us anything, it’s that The Sopranos will appear even more “late ’90s/early ’00s” as it fades deeper into the past.

The genius of “Made in America” is that it exists slightly out of time, because it never really ended. As Perry sings, it goes on and on and on. Even now, there’s no definitive answer to “What happened to Tony Soprano?” and there probably never will be. Generally speaking, there are three possibilities: (1) Tony was killed, most likely by the Members Only guy; (2) Tony was not killed on this day, but probably soon after, because that’s the life he’s chosen; (3) Tony was not killed at all and is free to live on in our imaginations. I like to think that Tony, if he is alive, was thrilled that the Giants won the Super Bowl and — because of his relative tolerance during the Vito/Johnny Cakes affair — is secretly against New Jersey governor Chris Christie keeping gays from getting married.

When “Made in America” first aired, people tended to think that it was either ambiguous and totally brilliant or ambiguous and — to quote the Chicago Tribune‘s Maureen Ryan — “kind of jerky.” Then there was Chase, who declared that the ending wasn’t ambiguous at all but plainly, even dumbly obvious. “Anybody who wants to watch it, it’s all there,” he said in a morning-after interview with TV critic Alan Sepinwall. For millions of viewers, this idea was so perverse that it almost seemed criminal, a sentiment summed up by the very New York Post-sounding New York Post headline “Tony and Gang Whack Fans.”

Chase’s “it’s all there” quote inspired bloggers to do ridiculously thorough examinations of the episode’s final scene, the most ridiculously thorough of all being this 22,000-word screed that analyzed the climax of “Made in America” and seemingly parsed through every frame and sound effect.

The final conclusion? Tony was murdered.

The strongest evidence for the “Tony is dead” argument came from statements made by Chase himself that pointed to clues from earlier in the sixth season that explained (maybe) the last five minutes of “Made in America.” In “Sopranos Home Movies,” Tony talks with brother-in-law Bobby about the likelihood that they will eventually be shot to death. “You probably don’t even hear it when it happens, right?” Bobby reasons. The other clue was stuck inside “Stage 5,” which includes what appeared at the time to be a throwaway scene where Silvio eats dinner with Gerry from the New York crew and doesn’t realize that Gerry’s been blown away by a button man until he’s splayed out on the floor. Both scenes, underlined later by Chase, suggest that the cut to black was meant to show Tony’s sudden lack of consciousness — or so it would seem.

But … why would Tony be killed after making peace with New York earlier in the “Made in America” episode? And who is the Members Only guy? And what was with all the Journey? Chase declined to fully connect the dots. “It’s just that I think that to explain it would diminish it,” he said, ensuring that even as The Sopranos aged, “Made in America” would stay just as maddening.

Soon after The Sopranos premiered on January 10, 1999, it was showered with superlatives to a degree that’s still unprecedented. The New York Times famously called it “the greatest work of American pop culture of the last quarter century.” David Remnick of The New Yorker said it was “the richest achievement in the history of television.” When TV Guide picked the 50 greatest TV shows of all time in 2002, The Sopranos ranked fifth, ahead of 60 Minutes and right behind Seinfeld, I Love Lucy, The Honeymooners, and All in the Family — and that was based on just 24 episodes.

The Sopranos had such a seismic impact on television that it essentially wiped all remnants of TV history that existed before 1999 (at least in the realm of one-hour TV dramas) out of the popular consciousness. Hard-core students of television still watch Hill Street Blues and Homicide: Life on the Street, but for the most part the best dramas according to both fans and critics tend to date from the last 10 years or so. Again, this would seem insane in movies or pop music; There Will Be Blood and My Beautiful Dark Twisted Fantasy are masterpieces, but nobody outside of the darkest, dankest corners of Internet message boards are calling them the absolute pinnacles of their respective forms.

But not only is it common to do this for TV, for the most part true it seems true. Consider the Emmy nominees for Best Drama in 1999: Along with The Sopranos, there was ER, Law & Order, NYPD Blue, and the category’s winner, The Practice. You can certainly make a case for the other shows being good and even groundbreaking in their time, but they’re obviously not as good as The Sopranos or the other “great” ’00s shows like The Wire, Deadwood, The Shield, and Six Feet Under. The Practice, while a decent way to spend an hour if you can still find it in syndication, now looks like a prehistoric text from a distant time, even when compared with roughly analogous modern network dramas like The Good Wife or Parenthood.

Today, most serious followers of blue-chip shows tend to agree that the best TV dramas ever are The Wire and The Sopranos, in that order. That includes Sepinwall, who helped to invent how contemporary TV shows are written about with his comprehensive recaps of Sopranos episodes for the Newark Star-Ledger.

Sepinwall’s reasons for preferring The Wire to The Sopranos (which he stresses is a strong no. 2 on his all-time list) are pretty typical: He thinks The Wire had a better grasp of storytelling and a brighter galaxy of characters. The later, weaker, and yet somehow better-remembered seasons of The Sopranos don’t help its case, nor did that last scene of “Made in America.” For Sepinwall, if the episode had ended “with the scene before they go to the diner, where Tony visits Junior in the old folks’ home, and that’s your glimpse of what the future is for Tony, I think people remember it very differently,” he told me.

Sepinwall’s other reason for ranking The Wire higher is interesting and, I’d bet, common for viewers of both shows. “It’s less cynical,” he said. “While I marvel and laugh at the cynicism of The Sopranos, it can wear on you after a while. The Wire is bleak in its own way, but it has a belief in humanity. Whereas The Sopranos just believes that people suck.”

The Sopranos (and Chase specifically) also believed that TV conventions sucked — perhaps even more than people — and expressed this in ways that got less subtle as the series went along. The Season 6 premiere opened with an FBI agent repeating, apropos of nothing, a quote by American essayist H.L. Mencken about how “nobody ever went broke underestimating the taste of the American public,” before vomiting out the window of a moving car. The end of “Made in America,” in turn, was the ultimate anti-convention, a blatant act of overestimating the public’s tastes, and a refusal to give people what they wanted. And if you hated it, it was way cynical.

“The way I see it is that Tony Soprano had been people’s alter ego,” Chase explained to Sepinwall. “They had gleefully watched him rob, kill, pillage, lie, and cheat. They had cheered him on. And then, all of a sudden, they wanted to see him punished for all that. They wanted ‘justice.’ They wanted to see his brains splattered on the wall. I thought that was disgusting, frankly.” Chase denied that the cut to black was a “fuck you” move, but his resentment of the audience’s expectations in this quote belies that. While calling the end of “Made in America” an act of hostility goes a little too far, this much seems obvious: Chase managed to end The Sopranos on a note that would satisfy no one more than himself.

After taking such pains to (maybe) put Tony’s wall-splattered brains off-camera, what must Chase think now that The Sopranos has simply replaced one set of conventions with another? After so many shows about antiheroes and dysfunctional families, The Sopranos has long since stopped being the fresh game-changer it once was. (As with anything that becomes the establishment, people are now even questioning whether The Sopranos and its influence “ruined” TV.) But the cut to black in “Made in America,” at least, remains utterly unique in the annals of TV history. Even a show as fearless as Breaking Bad couldn’t quite top it at the end of its most recent season, ending instead on a carefully composed close-up that spelled out exactly for the audience just how bad its likable but evil protagonist was.

Such a move would’ve been beneath Chase. His likable but evil protagonist is forever stuck in purgatory between life and death; that’s how this Sopranos fan likes to think of it, anyway. Any explanation of “Made in America,” no matter how smart or well-reasoned, misses the point. To explain it would diminish it.