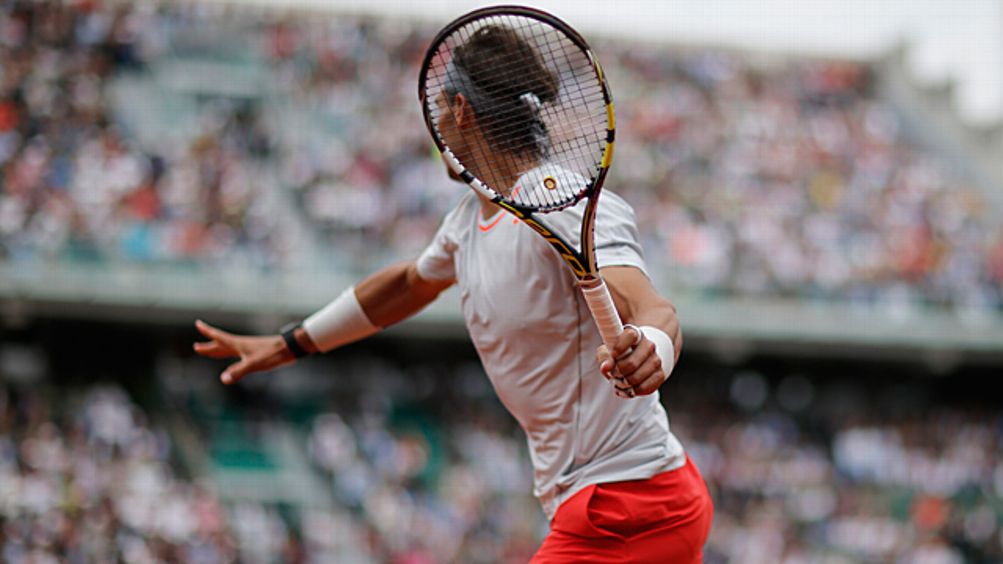 Just for the sake of raw melodrama, let’s take a minute to recap Rafa Nadal’s career trajectory from June 2012 to February 2013, a span of time that future tennis historians will remember as “Rafa: The Lost Weekend.”

• July 19, 2012: Despite being named to carry the Spanish flag in the Opening Ceremony, Rafa nevertheless withdraws from the London Olympics. The cause: the tendinitis in his left knee that’s bothered him on and off for years.

• August 2-9, 2012: Rafa withdraws from the Rogers Cup and the Cincinnati Masters, raising doubts about whether his knee will recover in time for the U.S. Open.

• September-December, 2012: Rafa’s knee ultimately forces him to miss the rest of the 2012 tennis season. By the end of the year, his ranking has slid to no. 4, a spot he hasn’t occupied since he was 18.

• December 28, 2012: Rafa withdraws from the Australian Open, the first major of the 2013 season. This time he cites a “stomach virus,” which most of the tennis world interprets as “I’m sick of talking about my knee. Ask me about something else, anything, please, you vultures.”

I mean … not a good stretch, right? The worst part wasn’t that Rafa’s two biggest career rivals won majors while he was helpless to stop them. It wasn’t that Murray — previously the junior partner in the firm of all-conquering greats at the top of men’s tennis — more or less took his place as a foil to Federer and Djokovic. It wasn’t even that his ranking skidded to no. 5 after Australia. No, the worst part was that Rafa’s seven-month absence validated every doomsaying whisper about how his high-torque baseline play and one-man-bumper-car style would eventually wreck his career. Over the years, there had been a lot of those whispers; “Nadal’s knee” is a significant enough stress point in the psyche of men’s tennis that the New York Times greeted the start of the French Open this week with this weirdly amazing avant-sci-fi video of a bored voice explaining science over glowing 3-D close-ups of Rafa’s skeleton.

For tennis fans, Rafa’s Lost Weekend was doubly depressing because it meant that the most reliable source of match drama in the game — Nadal’s tendency to go Full Thermopylae the second it seemed like he might lose — was taken away at the exact moment of Murray’s rise.1 Here’s what I wrote about this the last time I checked in with a column on Grand Slam tennis, right after the Australian Open final in January:

Win or lose, no one pushes the other top players to new heights like Nadal does, which is why he’s been involved in a disproportionately large share of great matches over the last … well, eternity. Wimbledon ’07, Wimbledon ’08, Australia ’09, Australia ’12; that’s just scratching the surface. Federer’s the greatest player ever, but I’m increasingly convinced that Nadal is the key to the greatness of this whole era.

As recently as February, it wasn’t clear Rafa would ever come back, much less that he’d be any good if he did. His career was starting to look cursed. He’d spent years struggling to take the game from Federer,2 then barely a year after he did, Djokovic surpassed him, beating him in seven straight finals in 2011-12. Then, before he could fully adapt, his punishing style of play got to be too much for his own body. The end, maybe.

And the thing is, it really could have been. Whatever happens in Paris over the next week and a half, remember that.

So let’s say the Lost Weekend is the background to this year’s French Open. The foreground is … but what should we call it? The Decisively Located Workweek? The Monday Morning Of This Is My PhD In Cartography, Motherf—–? As you probably know if you’ve read this far, Rafa came back in early February and turned the career-in-decline narrative violently on its head, almost as if he were acting out a meta version of one of his five-set comeback wins. He reached the final of his first tournament back, the Chile Open. Then he won six of the next seven tournaments he entered. Not matches. Tournaments. To put that number in perspective, consider that of the 128 players entered into the men’s draw in Paris, 108 of them have not won six titles in their entire careers. He’s reached the finals in all eight tournaments he’s played. He’s beaten Federer twice, and it hasn’t been close, and that’s being kind to Federer. He’s beaten David Ferrer, the fifth-ranked player on earth, twice. He’s beaten Tomas Berdych, Jo-Wilfried Tsonga, and Juan Martin del Potro, whom he beat on a hard court. He’s won an important hard-court tournament, Indian Wells. Overall, he’s 36-2. Apart from a strange and slightly troubling loss at Monte Carlo3 to Djokovic, he’s been untouchable, and he enters Paris less as the prohibitive favorite than as a sort of combination god-emperor and ambulatory Arc de Triomphe.4

Rafa, in other words, is just comprehensively back, and the “sustained assault on absolutely everyone else” I hoped in January he’d launch is already leveling cities. And it’s been tremendous, even if Murray’s dumb lower back is denying us the resurgent-Rafa-vs.-postbreakthrough-Murray matchup we (uh, I) crave. Don’t read too much into the dropped first sets against Daniel Brands and Martin Klizan that everyone’s freaking out about; they were early tune-up jitters against players Nadal had never faced before and whose games gave him some minor matchup problems.5 As I see it, there are four things, and only four things, that can stop Rafa from charging to an eighth title at Roland Garros.6

1. He gets fatigued. He’s been playing best-of-three tournaments since the comeback; this is his first best-of-five since losing to Rosol at Wimbledon last year. So that could be a thing, maybe? Except … come on. It’s Rafa Nadal in Paris. He’s 26, and if I understood that Times video right, his cardiovascular system is technically its own volcano. He’s not losing because he gets tired. Unless …

2. The weather is terrible. So far, it’s been terrible. Terrible weather means a backed-up schedule, which could mean less rest time between matches. (He’s already had one match, his 4-6, 6-3, 6-3, 6-3 second-round win over Klizan, postponed a day by rain.) Terrible weather also means saturated tennis balls and dulled courts, which can take the bite out of Nadal’s crazier spins. (The cold, wet conditions were probably a factor in his shaky starts against Brands and Klizan.) Although even that should hurt him only if …

3. The knee starts acting up. Don’t ask him about it. He doesn’t want to talk about it. He’s been dishing out pain for four months without being held back by the odd patellar twinge. On the other hand, he spent a lot of years treating those tendons like the rubber bands in a finger banjo. If one of them gets twanged the wrong way, he could be out for another seven months. And it’s not as if he gentled his game in the meantime. That said, though? His knee has been bothering him at least some of the time since coming back, and he still won all those matches. Even that might not be a huge deal, unless …

4. He has to play Djokovic. Because Rafa’s artificially deflated ranking stuck him with a ridiculously low seed, he’s currently set to play Djokovic in the semis in a textbook “semifinal that’s really the final” encounter. The world no. 1 has been having his own troubles lately — he won just two matches in his two French Open warm-up tournaments — but he beat Nadal on clay in Monte Carlo barely a month ago, at a tournament Rafa has dominated as much as Roland Garros. It’s hard to see how Rafa could beat Nole with the form he showed against Klizan, but then, the hierarchy between these two has gone pretty vague at this point. Assuming the seeds hold, it’ll be fascinating to see what sort of business gets done when they meet. Whichever player wins will then go on to roll Federer off the Pont Neuf in the final, obviously.

One of the things that’s made the last few years in men’s tennis so electric is that we’ve had both an established core of elite talent and a high degree of volatility within that core — Nadal challenging Federer while Federer was still near his peak, Djokovic surging past Nadal while the latter was still in his mid-20s, Murray gate-crashing the castle last year. Right now, it’s Rafa’s comeback that’s providing both the stability (because he owns the French Open) and the volatility (because he was out for 222 days and now he’s the challenger again). I could not be more excited to see what’s going to happen in this tournament. I could not be more excited to have him back in the game, sneering and wasting time and playing brilliantly and fearlessly again.