The 30: College of Cardinals

The Price of Promise 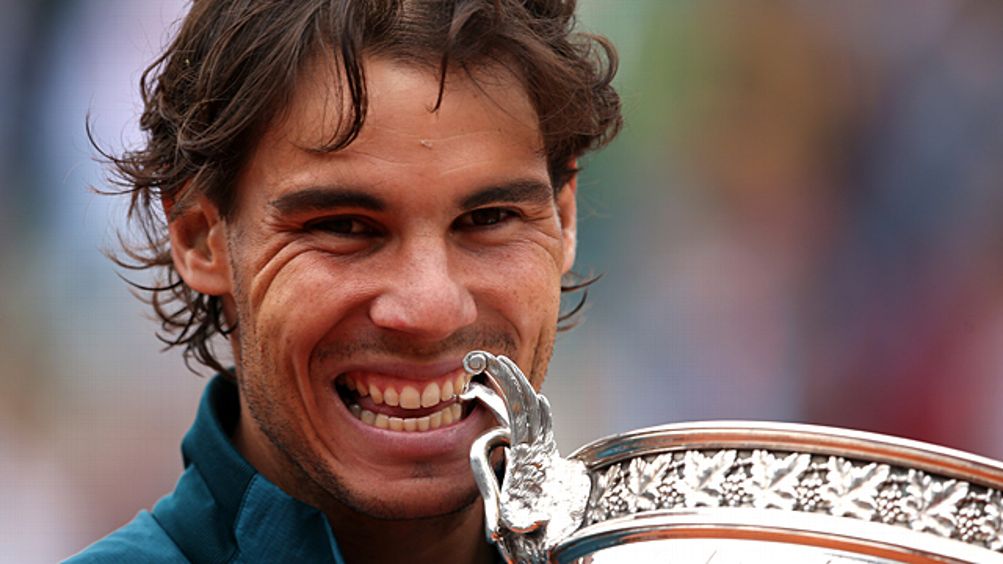 And so, with one last involuntary facial contortion for the cameras, Rafa Nadal completes his comeback from Ongoing Knee Misfortune and extends his reign as the champion of the weirdest major in tennis. You know that old cliché about how great sports teams don’t rebuild, they just reload?1 At the French Open, Nadal doesn’t reload, he just refreshes. As in a web page. The web page displays a JPEG of him biting the handle of the winner’s trophy, the marvelously named Coupe des Mousquetaires, which he does every year, as if to confirm that it’s made of gold, which it isn’t, it’s made of silver — but like I said, it gets weird at Roland Garros. Maybe Rafa’s got really hard teeth.

An American in Paris

Serena Williams’s dominance of Maria Sharapova and the French Open.

The Threat of Terror and the French Open.

What’s the stuff Wolverine’s skeleton is made out of? Adamantium? Maybe Rafa’s teeth are made out of adamantium and he can judge the authenticity of precious metals by assessing their bite resistance on his own internal scale. I don’t know; maybe I’m just looking for an excuse to get “adamantium” and “Coupe des Mousquetaires” in the same sentence. Or maybe I’m looking for an adequate lead-in to the fact that Sunday’s tournament final was a hugely forgettable match, with Rafa winning his eighth French Open title easily, 6-3, 6-2, 6-3, over his friend and fellow Spaniard, the fourth-seeded David Ferrer. Compared to the four-hour war against Novak Djokovic on Friday, this was smooth, three sets of data packets being transmitted and received without incident. No JavaScript, no latency. Ferrer is several inches shorter and around 30 pounds lighter than Nadal — though, hang on, I’ve got to interrupt myself here to point out that they looked like Merry and Pippin in their immortal prematch photo with Pau Gasol: 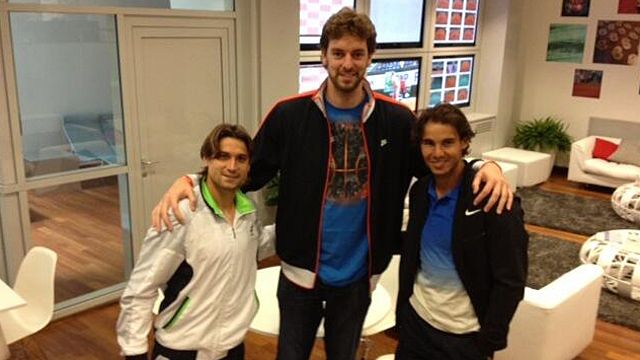 But that’s deceptive, because in reality Ferrer is not tall or strong enough to contend with Nadal on clay, and that was the whole story. He’s a game scrambler, Ferrer (a “trier,” as Mary Carillo said at one point), but when they play each other, Nadal might as well be an Uruk-hai.2 I’d say I’m sorry for mixing my Tolkien metaphors, but you do what you have to do in this life. By the end, Tolkien metaphors were all Ferrer had to fall back on.

The only really memorable thing that happened was that near the end of the second set, a half-naked protester wearing a white tragedy mask, red pants, and what I’m pretty sure were Sperry Top-Siders ran out onto the court waving a lit flare and bearing the mysterious words “Kids right” written on his belly. Apparently he was part of a right-wing group opposed to the recent legalization of gay marriage in France. So, yeah: Cool thinking, right-wing group!3 Nothing says “adopt my cause” like inscrutably disrupting a beloved sporting event.4 Anyway, this was an alarming moment, one that threw the players off for a few games. The specter of the Monica Seles stabbing always rears its idiot head when a streaker runs onto a tennis court; for the fans in the stands, as well as for the players, it must have been terrifying. But thankfully, it was just a corny stunt — like the French Open final streaker in 2009, who tried to put a hat on Roger Federer,5 or the French Open final streaker in 2003, who wore a little merkin made out of tennis balls.6 Nadal was able to visit torment upon Ferrer for one more set, and Usain Bolt came out to give him the trophy, and everyone got on with their Sunday more or less as planned. 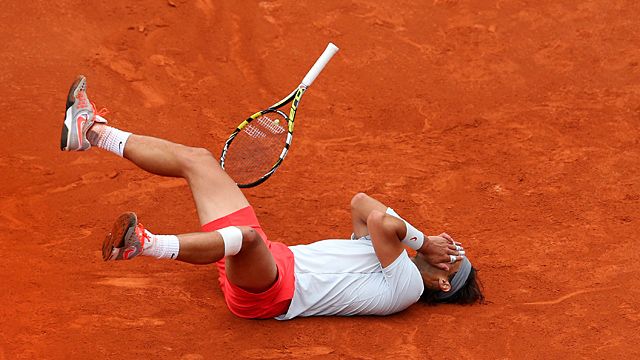 The French Open is the weirdest major in tennis because clay is more different from grass and from hard courts than the latter two are from each other. So it’s given rise, historically, to these surface-specific savant-type players — your Gustavo Kuertens, your Thomas Musters — who emerge onto the international stage for two weeks every year7 and interrupt the narrative of the rest of the tennis season.8 The French has been even weirder during the Federer-Nadal-Djokovic-Murray golden era, because Nadal has clear genetic links to the clay-court specialists of days past (he’s Spanish, he’s much better on clay than on any other surface), but he’s also an all-time great on those other surfaces (if you took away his French Open titles, he’d have four majors, only two behind Djokovic, Edberg, and Becker).

As a result, for the last few years, Roland Garros has somehow both confounded and confirmed the unfolding story of the game. Confounded it because it’s the one place Nadal has been able to hold out against the rise of Djokovic and Andy Murray, and confirmed it because, after all, Nadal is one of the best players who ever lived. Every June, he seems to leave Paris having reasserted his place at the top of men’s tennis, but for the past two years, that’s been an impression that hasn’t lasted beyond Wimbledon.9 So like one Perrier bottle in the middle of the Sahara, the French Open changes everything and changes nothing at the same time.

And you could make the same case about what Sunday’s win means for Rafa’s career, particularly in light of his ongoing comeback from knee hell. It proves, fairly amazingly, that he’s back and playing major-champion-quality tennis. A few weeks ago, even though he’d won six of his seven past tournaments, that didn’t seem obvious. Judging from his Uncle Toni’s tearful reaction to the win against Djokovic on Friday, it might not have been obvious to the members of his own team. Well, let the return of the annual trophy-tasting ceremony remove all doubt: Rafa is a force on the tour again.10

But what kind of force? From one angle, all he’s done is show he can still win a tournament that he’s always expected to win. Has he come back from injury only to resume his slight decline of 2011 and 2012 (both years he also won the French Open), or has he come back ready to challenge Djokovic’s and Murray’s supremacy at the green-floored majors?11

That’s a greedy question, but the historical stakes are so high for Rafa that it’s one we have to ask. Let’s assume for the sake of argument, by which I mean tragic obviousness, that Federer will never win another major. Federer has 17 majors; Nadal has 12. Nadal is 27 and has a frowny-face emoticon in place of a left knee. He’s probably not going to win six more French Opens, and even if he does, a résumé with 14 majors on clay and four on grass and hard courts feels more like a gigantized case of clay-court-specialitis than the CV of the greatest player to pick up a racket. But what if he were to win, say, three more titles in Paris, two in London, and one in New York? That would give him 18 majors: 11 French Opens (a record that will never be touched at any Grand Slam–level tournament), four Wimbledons, two U.S. Opens, and one Australian Open. He’d have won more majors than Federer, beaten Federer in 66 percent of their matches,12 and achieved his haul of majors during the primes of both Djokovic and Murray (unlike Federer, who is older than the other three top guys and won a fistful of titles before they were real competition). At that point, how do you even make an argument against his being the best player in the history of the sport?

Nadal is divisive among tennis fans. Purists and David Foster Wallace diehards will never rank him above Federer if there’s a way to avoid it. (I’m both; I know.) So that’s what he’s playing for now — everything, essentially. It’s not a question of legacy so much as a matter of self-definition. Is he a freak of clay wizardry who took advantage of some cracks in Federer’s late style to win a few mainstream majors before Djokovic showed up? Or is he the best and toughest player who’s ever done this thing, someone who emerged in the immediate wake of a transcendent superstar and willed himself to out-transcend him? This French Open, as awesome as it was, can’t tell us. But it’s the most fascinating question in tennis. It may turn on a couple of ligaments, but then no one said sports wasn’t stupid. Here’s to good health, tasty silver, and Nadal vs. everybody at Wimbledon in a couple of weeks.