The Heat in Hindsight 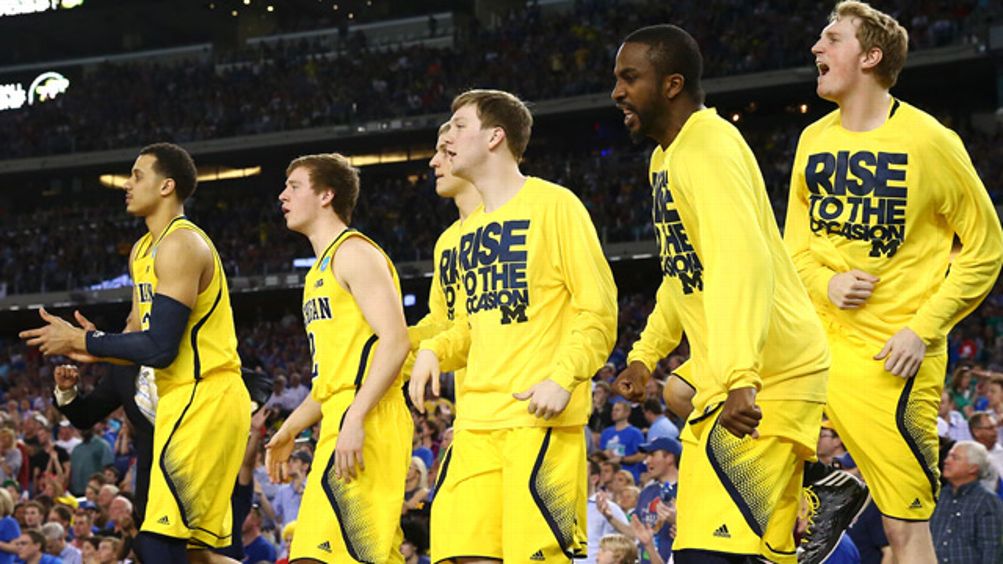 As exciting as the first three rounds of the NCAA tournament were, this weekend featured some pretty big duds. The closest game was Wichita State?Ohio State, and even that was boring for the first 30 minutes. At least Friday provided us with one of the great comebacks in NCAA tournament history, when Trey Burke revived Michigan’s season and drove a stake through the heart of Kansas fans everywhere.

Here are 12 takeaways from the next-to-last weekend of the college basketball season.

When Kansas guard Elijah Johnson introduced his fist to the groin of Michigan center Mitch McGary less than two minutes into Friday’s game, these words from the great poet Toby Keith came to mind:

Justice will be served and the battle will rage. This big dog will fight when you rattle his cage. And you’ll be sorry that you messed with the U.S. of A., ’cause we’ll put a boot in your ass ? it’s the American way.

Even though Johnson inexplicably wasn’t ejected after fouling McGary, justice was served when the Michigan big man ended up playing the game of his life. Johnson played perhaps the worst game of his life, and Kansas suffered one of the worst choke jobs in NCAA tournament history. Let that be a lesson to you kids out there: Never punch an opponent in the nuts ? two minutes into a game. Save it for when the outcome has already been decided.

2. McGary is in danger of getting the Aaron Craft treatment.

Thanks to his 25-point, 14-rebound game against Kansas, McGary has been tagged the “breakout star of the tournament,” which is really just another way of asking, “Why is McGary suddenly starting to play well?” At any rate, fans and analysts alike are now praising McGary for playing harder than everyone else on the floor. And while his effort is certainly admirable, the seed is being planted for McGary to be the most hated man in college basketball after a few seasons.

Earlier this season, I wrote that I expected McGary’s teammate Nik Stauskas to follow Craft’s footsteps, but now it’s obvious that McGary will too. During the first half of next season, everyone will be slobbering all over themselves at the sight of McGary outhustling other big men. But by the time next season is over, the “McGary is overrated” backlash will be in full swing and critics will say he gets way too much attention for a guy who only scores off rebounds and pick-and-roll dunks. Halfway through his junior season, while Michigan fans are wondering if McGary will leave early for the NBA, the rest of the country will be laughing at the suggestion and actively rooting against him because they’re sick of hearing about him. That’s just what happens when you’re known for playing hard.

3. Ohio State and Florida proved winning is a lot more difficult when you dig yourself a double-digit hole in the first half.

This analysis brought to you by Reggie Miller’s “Ohio State needs to win these next five minutes” comment, which he said with less than six minutes left and the Buckeyes down 12 to Wichita State.

No, it’s true. They really did play each other Saturday. I couldn’t believe it either. All I remember is a two-hour nap before the Wichita State?Ohio State game, the Buckeyes getting dominated, and The Ten Commandments airing on ABC for half of an eternity. When Michigan beat Florida on Sunday, Steve Kerr mentioned the Wolverines will play the Orange in the Final Four. But get this ? Syracuse didn’t beat Indiana to go to the Final Four. Come to find out, it was that game against Marquette that punched its ticket to Atlanta. Crazy, huh? With the stakes so high, I’m sure it was a thrilling game. I wonder why more people aren’t talking about it.

5. What happened to Kevin Ware was the most horrific injury I’ve ever seen.

Nothing else needs to be said. Never mind his basketball career ? I’m just hopeful he gets a full recovery and a normal life after this.

6. The Jim Nantz pun potential with the Shockers in the Final Four is so high that we’ll inevitably be let down.

When I think of Jim Nantz, two things come to mind: “A tradition unlike any other1 ? The Masters on CBS,” and the fact that Nantz has long been the king of college basketball puns, which is a compliment as much as it is an insult. The real tradition unlike any other is the way Nantz shoehorns puns into the final seconds of every national championship basketball game. So with the most pun-able team in college basketball just two wins away from a national championship, there’s no way to avoid feeling excited about Nantz’s potential play-on-words bonanza. Expectations are so high, in fact, that it seems inevitable Nantz will let us down if Wichita State wins the national title. Everyone will be holding their breath as the final seconds tick off, hoping against hope that Nantz might say something really naughty. Instead, he will probably deliver something like “And that’s one small step for Wichita State, one giant leap for mid-majors everywhere!” and we’ll all facepalm and wonder why we ever expected more.

7. Revisiting the “[player’s name] looks like” search on Twitter was the best decision I’ve made in a while.

Mike Rosario looks like the Grinch….I can’t be the only one who thinks that.

This is an odd moment to bring this up, but Gary Harris looks like the black Buzz Lightyear to me

8. This is the worst part of the college basketball season.

You’d think that the Elite Eight and the anticipation of the Final Four would be the most exciting time of year for a college basketball fan, but not for me. This is my least favorite time of year. All season long, the anticipation of what might happen in the NCAA tournament and which teams would win their conferences created compelling story lines. You could probably reread my columns from this season and find the phrase “there’s no telling what might happen in March” a hundred times. That anticipation of the unknown is what makes college hoops so great. Now, though, we have a pretty good idea of what’s going to happen. The anticipation is mostly gone. We don’t know exactly what’s in store for the next week, but we know only three games remain and one of four teams will be national champion. We’re on page 447 of a 450-page book.

A week from now, I’ll be able to look back and think about how awesome this season was. I’ll watch “One Shining Moment” and fight back my tears as Luther Vandross’s voice makes love to my ears. I’ll be able to appreciate one of the wildest college basketball seasons of my life. In the meantime, I’m struggling to not think about how the end is near.

As a pair, Steve and Lorri Zeller shattered the record for most times a college basketball player’s parents have been shown on TV together in a single season. But individually, no parent will ever be shown as much as Sonya Curry. To celebrate her incredible run from Steph to Seth, here’s a look back at one of her finest moments.

10. Saying teams or conferences are overrated or underrated based on individual NCAA tournament games is stupid.

Here’s an alternative thought: Every team in the country exists separately from its conference, and any team in the tournament can beat any other team on any given night.

11. Capital One is making a late push for most annoying commercial of the tournament.

The only reason Capital One isn’t running away with the annoying-commercial title this year is because there are so many different versions. If you pooled all the annoyance from these different commercials into one commercial, Capital One would be in the Hall of Fame alongside such greats as “N-N-N-N-NAPA Know How,” “This is ouuuuur country,” and “IT STARTED WITH A WHISPER.” Instead, Capital One spread out its irritating message over a handful of commercials, most of which feature Charles Barkley’s terrible acting and a not-as-charismatic-or-funny-as-he-thinks Alec Baldwin.2 The worst one to me, though, has to be the one in which Baldwin makes fun of Barkley’s underwear with insults that would make even the lamest junior high kid cringe, yet somehow makes Greg Anthony almost blow his funny fuse.

I still think Southwest and Bud Light are nos. 1 and 2 for now, but Capital One is making a late charge and could steal the title before it’s all said and done.

12. The national championship is Louisville’s to lose.

This seemed true after the first weekend of tournament action and it was confirmed by the second weekend. Louisville is the team to beat. Given Michigan’s impressive wins over VCU, Kansas, and Florida, Syracuse’s win at Louisville this year and the way the Orange dominated the Cardinals for stretches in the Big East tournament championship, and Wichita State’s penchant for defeating highly ranked teams, it’s still too early to crown the Cards champs. That said, none of the three remaining teams has looked as consistently impressive as the Cardinals. Russ Smith, Peyton Siva, and Gorgui Dieng are all playing as well as I’ve ever seen them play. Their defense looks impossible to score against, and most importantly, Luke Hancock’s beard is on point. There’s no telling what’s going to happen in these last three games, but if Louisville isn’t crowned national champion next Monday, I’ll be ? gulp ? shocked.

Damn it, it really is irresistible.