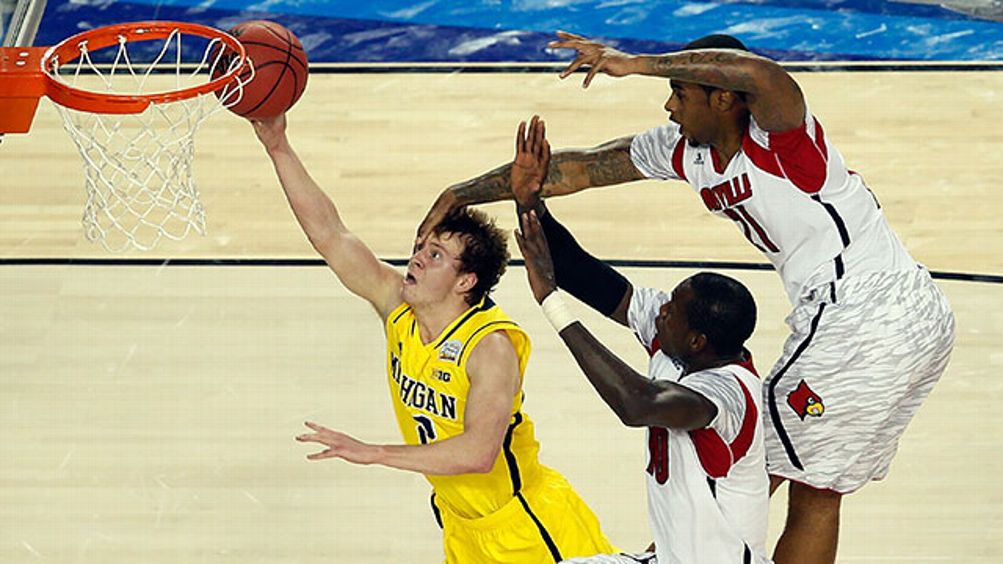 The wildest college basketball season of my lifetime came to an end Monday when Louisville beat Michigan in one of the most entertaining national championship games ever. Here are 12 moments that stood out during college basketball’s final weekend.

That Kevin Ware was rarely shown and rarely talked about during the national championship game might be the biggest upset in NCAA tournament history. After Ware suffered that horrific compound fracture against Duke on Easter Sunday, I figured that Louisville would rally around the injury and use it as motivation in its quest for a championship. What I didn’t foresee, however, was that Ware would become a media sensation. His injury even transcended the sports world — this week Ware was invited to present the Top Ten on Late Show With David Letterman. When Saturday rolled around, CBS continued this obsession by cutting away from the Louisville–Wichita State game to show Ware sitting on the bench seemingly every 30 seconds.

But then Monday rolled around and it was as if CBS completely forgot about Ware. Maybe Spike Albrecht’s emergence had something to do with this. Or maybe CBS execs saw the entire Internet accusing the network of overkill. Maybe it was a little of both. Whatever the case, the fact remains that an unknowing person watching Louisville’s game on Saturday would’ve thought Ware was the only guy on the team worth a damn, while an unknowing person watching on Monday might not have been able to figure out that Ware’s injury ever happened.

My brother came over to watch the Final Four on Saturday, and at some point he mentioned that he was craving pizza. Less than a minute later, Pizza Hut’s commercial was shown. We thought it was destiny. We immediately placed an order for a Crazy Cheesy Crust pizza, ignoring some vital lessons our mother taught us long ago: “Never trust a product with the word ‘crazy’ in its name,” and “If you rearrange the letters in ‘Pizza Hut’ you can spell the phrase ‘our pizza is rubber coated in butter and grease and it will almost definitely give you diarrhea.'”

Considering I’m still unsure whether it was the pizza’s entrance to or egress from my body that was the most unpleasant part of my night, let’s just say that mother knows best.

3. Travis Tritt should sing the national anthem at every Final Four.

Not so much because I thought his rendition was all that impressive, but more because I can’t think of anyone to better represent our country than this guy.

More importantly, he’s not the Fray.

4. My dog knows more about college basketball than I do.

For the second year in a row, I made my dog predict the outcome of the tournament. For each game, I offered him two treats, which represented the teams in that contest. The treat he ate first was the winner. And for the second year in a row, thanks to my dog’s picks of Louisville to win it all and Florida Gulf Coast to make the Sweet 16, he beat me in ESPN’s Tournament Challenge. As a college basketball analyst, you might expect me to feel embarrassed. Instead, I’m focusing on the positives and celebrating the fact that my dog is a genius.

5. The possession arrow is the worst.

There is so much awfulness in this world that it’s hard to keep track of it all. But thankfully — as tax season and Chris Brown have proved — certain terrible things have a way of popping up at the perfect times, just to remind us how heinous they are. Saturday night in the Wichita State–Louisville game, the possession arrow did this when it took away the Shockers’ last-second attempt to send the game into overtime. And no, I’m not hating on the possession arrow just because it deprived us of an exciting finish in this game. I’ve always thought alternating possession was a stupid way to handle jump balls, especially when alternatives like the XFL scramble remain available.

6. The wheels fell off the Mitch McGary bandwagon.

Considering the run he’s been on, if you would’ve told me McGary would be the third-best white guy on the court in the national title game, I would’ve probably said, “You mean to tell me there will be at least two other white guys playing?” In McGary’s defense, he battled foul trouble for most of the night, and even then he didn’t play poorly, shooting 3-for-6 and finishing with six points and six rebounds. But if you were one of the millions on the McGary bandwagon, you probably can’t help but feel a little disappointed. McGary was supposed to finish with 25 points and 15 rebounds while leading Michigan to the national title. It would cement his legacy as the most improbable NCAA tournament Most Outstanding Player of all time, leading him to turn pro and get drafted in the lottery despite not being on anyone’s draft radar before the tournament. Instead, now he’s likely to return for his sophomore season and become the most hated non-Duke player not named Aaron Craft or Marshall Henderson.

7. Spike Albrecht killed Louisville in the first half.

As a fellow short white guy from Indiana who was barely recruited because I could only do one thing well, Spike Albrecht is a hero to me. I don’t care that Louisville won the game or that Albrecht faded down the stretch — I’ll still remember the 2013 national championship as the Spike Albrecht Show. If Florida Gulf Coast’s entire team could be merged into one player, first-half Spike Albrecht on Monday night would be that player — irrationally confident, way too cocky for an anonymous spot-up shooter, yet so successful that you couldn’t help but text “Are you watching this?!” to everyone in your phone. On WWE Monday-night Raw, Dolph Ziggler cashed in his Money in the Bank opportunity and won the World Heavyweight Championship, yet the biggest moment of the night for me was when Albrecht hit his fourth consecutive 3 in the first half. That’s saying something.

8. Spike Albrecht killed Michigan in the second half.

What Spike giveth, Spike taketh away (or, if we’re talking about possession of the basketball, maybe that should be “giveth away”). As great as Albrecht was in the first half, he helped submarine Michigan’s title chances in the second half. Because of his incredible shooting display, coach John Beilein chose to ride Albrecht’s hot hand to the end, even though his hot hand cooled off during halftime. During the second half, the irrational confidence that had allowed Albrecht to drain challenged 3s was now allowing him to take stupid shots and make careless turnovers. To make matters worse, because Beilein was crossing his fingers that Albrecht could replicate his first-half performance, Nik Stauskas remained on the bench for most of the second half.

Don’t get me wrong — I would never suggest that Albrecht is the reason Michigan lost. He went above and beyond the call of duty and deserves all the Twitter followers, Facebook messages, autograph requests, groupies, and whatever other accolades accompany his performance in Monday’s first half. I’m just saying that his great first half came with a price, and it put Beilein in a bind. The could would never say so publicly, but knowing what he knows now, there’s no way Beilein wouldn’t have played Stauskas more and kept Albrecht on the bench for most of the second half.

It was unpredictable, exciting, and featured Trey Burke playing hero ball. It had terrible officiating, annoying commercials, and Russ Smith making boneheaded decisions down the stretch. Jordan Morgan missed a layup,1 Luke Hancock made it rain, and Gorgui Dieng hit his patented “Why is he shooting that oh yeah I forgot that he never misses from there” 17-footer. Along with a picture of Sonya Curry, a tape of the Indiana-Syracuse game, a lock of Kelly Olynyk’s hair, and a YouTube link to Miami’s players slapping the floor while running Duke out of the gym, you could put a recording of the national title game into a time capsule and you’d pretty much have the 2012-13 college basketball season covered.

10. The crowd was intense on Monday night.

I’m one of the people who are vehemently against college basketball being played in domes, primarily because I think the atmosphere sucks in huge stadiums. Monday night didn’t help my case, however, because from what I could tell the crowd was insane from start to finish. A lot of this could be a result of the game being so close and so well played, but I’ll give Louisville and Michigan fans the benefit of the doubt and assume that even if the game wasn’t great, they still would’ve brought it. Sure, they weren’t nearly as good as the WWE Raw crowd in New Jersey,2 but they were still 100 times better than I anticipated, and they deserve a tip of my cap.

11. I’m more excited than I should be to see Rick Pitino’s tattoo.

For those of you who went to bed when the final buzzer sounded, Pitino revealed in a postgame interview that he promised his team he’d get a tattoo if Louisville won the national title. He’ll probably just get “2013” on his ankle or something stupid like that, but the thought of Pitino having a barbed-wire tat around his bicep or “THUG LIFE” tatted across his stomach is an amazing visual.

12. This was the best “One Shining Moment” of all time.

Picking a favorite “One Shining Moment” is like picking a favorite kid, with the exception of the Jennifer Hudson version, which is like the drug-addled, serial-killing Kardashian fan with ties to North Korea whom you must love regardless. But there’s one reason why this year’s rendition sticks out — 57 seconds into the video, when Luther Vandross sings “the time is short,” Tubby Smith and Ben Howland are shown shaking hands. If you don’t know why this is a big deal, maybe this will help: Three days after Minnesota beat UCLA in the first round, both Smith and Howland had been fired.