Editor’s note: This article appears in the March 27 issue of ESPN The Magazine.

The best thing about the ESPNews ticker: You never know what to expect. Random hoops scores scroll by … and then you see something like “Syracuse coach Jim Boeheim out two games (kidney stones).” Anything is possible. So last Thursday morning maybe I should have been prepared for the following blurb: 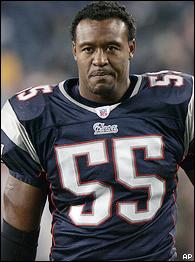 Can you ever be prepared to learn your favorite team just dumped one of its greatest players? Sure, there’s a decent chance Willie will return to the Pats with a reduced cap figure, so I’m not going to get carried away. It’s the principle that bothers me. I can’t figure out how the NFL — easily the most popular and entertaining sports league around — can drop the ball on something so simple. It needs to figure out a way to let signature guys stay with their teams.

Now, I knew the NFL’s labor agreement would get done. You get strikes and lockouts only in sports with failing economic models. The NFL is not one of those. It’s the most lucrative league of all time. As the owners haggled over dividing their riches, they seemed like the heads of mafia families in the 1940s arguing over drug money. Eventually, they figured it all out and kept the current structure in place, but not before wasting everyone’s time and antagonizing their fans. The sight of these old rich guys emerging from last week’s final meeting acting like they’d been through some sort of war seemed more than a little obscene.

My favorite part: Buffalo’s Ralph Wilson voting against the agreement because he wasn’t given enough time to figure out the parameters of the proposal. Can’t you imagine poor old Ralph sitting at some giant conference table, trying to read a proposal that was written on a cocktail napkin, and yelling, “Hold on, I can’t find my glasses” as everyone else groans? Seeing how ancient some of these owners are, it’s less surprising that coming to an agreement took so long than it is that a bingo game didn’t break out.

But here’s what really gets me. These greedy geezers were so busy splitting up their money pie, they once again neglected to address the fact that their highest-profile guys rarely finish their careers with the team and in the town that made them famous in the first place. Jerry Rice should have been able to retire a Niner, Emmitt Smith a Cowboy. Dan Marino should have retired a Dolphin on his own terms, instead of after the team told him, “Keep playing, but not for us. We can’t afford you.” Brett Favre and the Packers. Isaac Bruce and Marshall Faulk and the Rams. Derrick Brooks and the Bucs. Michael Strahan and the Giants. And so on.

Every team has someone like that, only the NFL can’t (or won’t) figure out how to keep them where they belong. Sure, the league came up with the franchise tag, but that’s for stars in their prime, not older guys. Now, moving on is simply considered part of the game. Fans root for someone, care about him and then he leaves. When New England waived Willie, the sad thing wasn’t the move itself, but that we knew he would have to leave. His cap figure had become too swollen from back-loaded deals. Under the current system, your favorite players have a shelf life of eight to 12 years … then they’re gone. It’s almost like owning a dog.

Shouldn’t this be simple to fix? The NBA created the Bird exemption in the mid-1980s, allowing teams to exceed the cap to re-sign their own players. Obviously, a 12-man roster is different from a 53-man roster, but couldn’t the NFL steal a version of this rule? Let’s say there’s a hard cap, but every team receives a $10 million pocket independent of the cap that only can be used for players with nine-plus years of continuous service.

Why nine years? Because that is a significant amount of time to spend with one team. Both team and player should be rewarded for such loyalty. In a league in which veterans switch teams every spring as if someone stuck all 32 rosters on an iPod and pressed shuffle, couldn’t we use a little built-in continuity? Even if it concerns only two or three veterans per team? 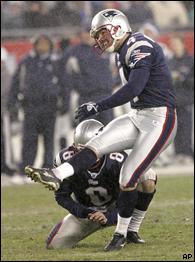 Take the Patriots, who drafted McGinest in 1994 and signed the undrafted Adam Vinatieri in 1996. The two have six Super Bowl rings between them. Other than Tom Brady, McGinest has been the defining Patriot of the Belichick era, a gamer who always rose up when it mattered most. Vinatieri nailed three of the most famous field goals in NFL history (in the Snow Game and in Super Bowl wins against the Rams and Panthers) and probably goes down as the premier clutch kicker of all time. Take either one of them off the Pats and they aren’t The Champs. Look, I wouldn’t remove Mariano Rivera and Bernie Williams from the Yankees, either. Some things just shouldn’t happen.

Fast-forward to next September. Willie is playing for Cleveland, Vinatieri for Dallas. What’s entertaining about that? What’s the fun in dismantling a memorable team for no good reason? Isn’t continuity the single most important thing in sports? How does a father explain to his young son that Willie won’t be playing for the Pats anymore? If you’re a high school sophomore who’s been wearing Willie’s jersey since you were 4, why would you ever care about sports as much? What about my buddy Bug, a Patriots season ticket-holder since 1992, who adopted Willie as his guy and wore No.55 to every home game?

That’s what vexes me. Everyone passively accepts the “hey, it’s a business” approach. But it works both ways. Signature guys shouldn’t have to abandon their original teams to find market-value deals in their waning years. We want to watch guys like Willie break into the league, emerge into All-Pros, lift us to a higher place, shift into the “grizzled veteran” stage of their careers, hang on for that one final season when they’re getting it done on memory and memory alone and then walk away on their own terms. We
want the sob-filled press conference, we want emotional hugs with the coach, we want the owner fighting back tears and saying, “He defined what being a (fill in the team) was all about.” We want the complete arc.

Right now, caring about NFL stars is like watching a movie at which you’re forced to leave the theater with 15 minutes to go. It always ends with a punch to the stomach. Always. I found out about Willie from ESPNews, but poor Bug found out during a vacation in Aruba. After debating how to handle a Willieless future, The Bug decided to retire his No.55 and make another purchase. Richard Seymour is an option. So is Ben Watson. And Vince Wilfork. “Those jerseys are freaking expensive,” The Bug says. “I need to find someone who’s going to stay with us for a while. I don’t want to have to buy another one three years from now.”

And that’s the worst thing about the NFL: You never know.