33 Burning Questions From Round 1 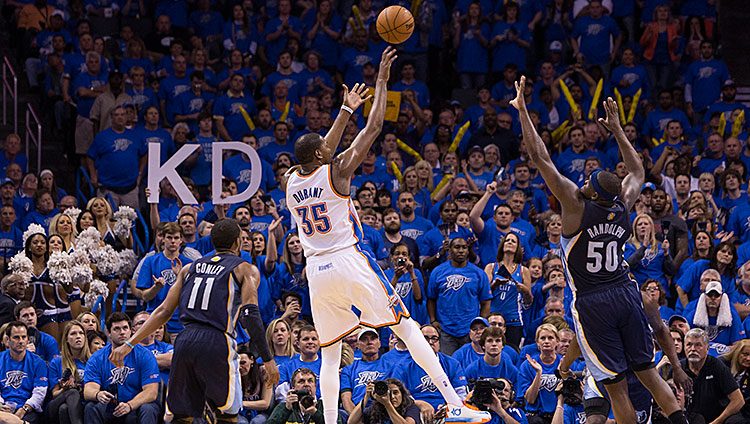 Back on February 25, late in the third quarter of a home game against Chicago, Atlanta’s Dexter Pittman grabbed an offensive rebound and immediately went up for a layup. He missed. It would be Pittman’s only shot of the year. He was one of 480 players who attempted at least one field goal in the NBA this season. Together, these players ended up shooting more than 204,000 shots. No player took more shots than Kevin Durant, who attempted 1,688 field goals. He also ended up leading the NBA in scoring. Durant’s accomplishments are common knowledge, but there is a ton of interesting data buried in a season’s worth of shooting data, yet few of those ever get celebrated.

Don’t get me wrong, Durant shooting and scoring more than anyone is a fantastic accomplishment, but his making 849 field goals during the regular season is only part of the story.

Most fans wouldn’t have a hard time illuminating the differences between Pittman and Durant, as scorers, but what about the differences between Durant and Dirk Nowitzki? Or Dirk and Steph Curry? Given the wonders of contemporary computation and troves of new kinds of basketball data, it’s a shame that at the end of the year we review only the same old standard statistical categories and reward the same old kinds of quantitative triumphs.

The chart above celebrates the players who produced the most points from different regions around the floor. Durant was the league’s top overall scorer, but players like Curry and LaMarcus Aldridge were actually the most dominant scorers in multiple important spaces around the floor.

It also shows that Blake Griffin led in scoring within the most sacred real estate: the interior. As a whole the league took 42 percent of its shots inside 7.5 feet of the rim. One of last season’s most frighteningly telling stats was LeBron James leading the NBA in both total points and field goal percentage in this crucial area. James couldn’t repeat that feat this season, as Griffin’s breakout campaign was just bold enough to unseat James as the league’s leading interior scorer.

In terms of shooting efficiency, James was still the king of the paint, converting 75 percent of his shots inside 7.5 feet. The league, as a whole, shot a modest 56 percent. As a result, James retakes his throne within this next chart, which celebrates the NBA’s most efficient shooters from different spots on the floor:

In the midrange areas, where the league as a whole converts only 40 percent of its shots, we can see the importance of elite catch-and-shoot bigs. The most efficient midrange shooters this year included Serge Ibaka, David West, Chris Bosh, and Nowitzki — stretchy bigs who all serve as vital spacing agents for their teams. West, Bosh, and Nowitzki already enjoy great reputations as shooters, but Ibaka’s presence here may surprise some. He continued to emerge as one of the game’s best young shooting forwards, and his midrange touch continued to create key attacking corridors for Durant and Russell Westbrook.

Beyond the arc, Spurs dominated two of the five shooting zones. Danny Green continued his journey from scrap heap to spot-up legend, and was particularly great from the right wing, where he knocked down 59 percent of his 70 attempts. Marco Belinelli, who surprised many of us by winning the 3-point contest at All-Star Weekend, also turned in the best shooting performance at the top of the arc this season. Elsewhere, Detroit’s Kyle Singler and Milwaukee’s Khris Middleton demonstrated that it’s possible to put up strong efficiency numbers beyond the arc even if you play for a struggling team.

However, my favorite face on that chart belongs to Gerald Green, one of the NBA’s most fun players this year. Green has always been able to jump out of the gym, but this year he also managed to greatly improve his perimeter game and showcased a strangely beautiful blend of freakish athleticism and long-range accuracy. He was great everywhere beyond the arc, but was the best in the league from the left corner, where he made 53.4 percent of his 73 attempts. In a way, Green’s surprising and rapid ascendance served as a perfect emblem for the entire Suns organization.

The NBA is obviously full of amazing and diverse talents. Yet many of our awards and most common stats fail to properly celebrate that. And while there’s little doubt that Durant and James are the best overall players, looking at the league through such a narrow lens shortchanges the breadth of brilliance that splashes across our televisions night in and night out.