Have they all gone mad?

Editor’s note: This article appears in the Aug. 15 issue of ESPN The Magazine.

On the day I went to see “Murderball,” the Red Sox were trying to deal Manny Ramirez, their $160 million slugger who’d requested a trade and started jogging out grounders so the team would take him seriously; Ricky Williams was mounting a comeback in Miami, where he left last year’s Dolphins in the lurch to break Snoop Dogg’s most-weed-smoked-in-one-calendar-year-by-a-celebrity record; and Terrell Owens was griping about a contract that he’d happily signed one year before.

See where I’m heading? This was another sobering sports summer: athletes living in a distorted reality, fans taking every slight personally, money hanging over everything. Like always. 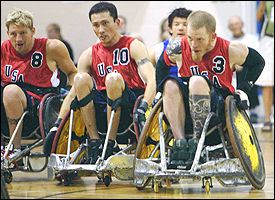 And so “Murderball” comes at the perfect time. The movie breaks you down from the first frame, when we see Mark Zupan changing into his workout clothes. Looking a lot like the WWE’s Undertaker, Zupan squirms around in his wheelchair, hoisting limp legs and yanking down his pants, dangling those same legs into a pair of shorts, then wiggling his butt so the shorts will reach his waist. There’s no background music, no sounds other than a disabled guy trying to get dressed. And you feel for him.

That’s the whole point. The movie wants you to feel for him. But the sooner you stop feeling sorry for the guys in “Murderball,” the sooner you will enjoy the movie for what it is: a compelling story about quad rugby (basically, rugby with wheelchairs).

The plot unfolds fairly quickly: Cut from the 2000 U.S. Paralympics team, vengeful star Joe Soares sued to regain his spot, lost his bid, then became Canada’s coach in a twist that could have been concocted by Vince McMahon. At the 2002 World Championships, the Canadians nipped the heavily favored Americans for the gold — exciting game footage, by the way — with Joe earning official villain status, screaming like Lou Piniella during the match and waving the Canadian flag after. (That same night, when a former teammate calls him a “traitor,” you almost feel like cheering.)

Like with any great sports flick, you know where we’re headed in this one — a climactic game between the Canadians and the Americans in the 2004 Paralympics. This thing can’t end any other way.

It’s how we get there that makes the movie special. All the main characters found their wheelchairs in a different way (polio, blood disease, car accident, you name it); all hit rock bottom; and all turned their lives around because of quad rugby.

Zupan has a smoking-hot girlfriend and tons of speaking engagements. Andy loves bars and bristles when people tell him, “It’s great to see you out,” as if he should stay home locked in his closet. Bob might be missing his hands and legs, but he still drives a car and deals poker hands. Joe belittles his young son (like any overbearing dad) and ignores his wife. On their 22nd anniversary, she toasts, “To you.” He says, “To Team Canada.” All the guys are sexually active. And all but Joe have a sense of humor — in fact, the funniest scene in the movie includes a “Jackass”-style prank involving Bob and a giant box.

At the same time, the movie keeps you wondering, why them? In one chilling scene, Zupan’s high school buddy, Christopher Igoe, revisits the place where he drunkenly swerved off the highway 10 years before,
paralyzing Zupan.

“I didn’t know he was back there [in the bed of the pickup truck],” Igoe says simply. He hasn’t gotten over it.

We follow a former motocross star named Keith Cavill through rehab and his triumphant trip home, during which he glances around his revamped bedroom, notices the wheelchair-accessible shower, fights off tears and finally says, “The fact is, what was once normal will never be the same.”

Later, he borrows Zupan’s rugby chair at an informational clinic — the competitive fire back in his eyes — and asks nurses whether he can ram the chair into something. So it’s no surprise when we eventually learn that Keith is saving up $3,000 for his own rugby chair.

See, that’s what “Murderball” is about: hope, life, love, loss, competition, fate, redemption. When was the last time you saw a movie audience applaud during the closing credits? Last weekend, I did.

That’s the ultimate message here. Zupan and his teammates never stop savoring life and the sport they love.

I will always believe that “Hoop Dreams” is the best sports documentary ever — because of its quality, originality and overall significance — but “Murderball” comes darned close.

Maybe Manny, Ricky and T.O. should see it.