The London Chronicles, Vol. 4: Great Britain Lives Up to Its Name 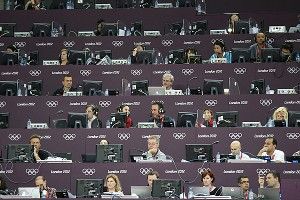 E very four years, we come together as a nation, united by a common purpose. We all want to bag on NBC’s coverage of the Summer Olympics. NBC’s promos are too mushy. Its talking heads are too pro-American. The sports are too, um, delayed. Twitter, home of the hashtag #NBCFail, is now the place we go faster, higher, snarkier. Americans might hate-watch the Oscars, we might pound our keyboards during the Super Bowl, but only at the sight of Bob Costas and company do we speak with such a homicidal, enraged voice.

We’ve become a nation of … sports media critics. You know, those writers who go sniffing for bonehead color commentary and network drama. For 17 days in late summer, their dirty pleasure is ours. Our emotional progression goes something like this:

Stage 1: Innocence. We start the Olympics as happy critics. “Watching the Today Show because I have unironic Olympic fever,” @mattyglesias tweeted on July 27. Our excitement is based at least partly on an expectation of novelty. Events like fencing and diving are different — quirkier, less commercial — than the NFL games and sports roundtables we usually get on TV. This, we think, is gonna be awesome.

Stage 2: Innocence Lost. Our innocence evaporates a few seconds into the Opening Ceremony. @JohnDeVore: “Meredith Vieira and Matt Lauer’s Olympic commentary makes it seem like all of America has had a stroke.” @michaelgaines: “So instead of this powerful tribute to the victims of 7/7, the US got Ryan Seacrest interviewing Michael Phelps??” You see what happened here? We had hoped we’d just hop from sport to sport, drinking them all in. Then we realized we were stuck with a television show. Our excitement was under the control of NBC.

Stage 3: Frustration. This is when we start to get mad. About that tape delay … “Just saw the NBC tape delay of Jesse Owens taking gold in the 100m dash,” snarks @BuzzFeedAndrew. About the heart-tugging … “oh god, gymnastics time. nbc will now turn the schmaltz up to ONE MILLION,” tweets @owillis. Here, what drives us nuts is NBC’s stubborn old-fashionedness: We feel we’re trapped in a Roone Arledge Lake Placid spectacular instead of a broadcast for the 21st century.

Stage 4: Rage. Now we’re just pissed. @Sparta_Chris: “Dear #NBC: FIX YOUR WEB STREAM SO MY FEED WILL STOP BUFFERING! #NBCFail.” @BBQGrail: “Dear #NBC bozos. Why are you broadcasting Spoilers for tonight’s Olympic coverage. Brian Williams is a putz! No need to watch now.” Stage 4 is where NBC honcho Vivian Schiller steps in it on Twitter, and Brit NBC basher Guy Adams briefly gets booted off. @JLR78 sums up our feelings: “Just in case I didn’t say it today … I hate #NBC and this farce they call Olympic coverage.”

Stage 5: Innocence Regained. “Olympics time!!” tweets @JLR78. You see, while she — we — were stewing about NBC, we were also watching the Fierce Five, Missy Franklin, Ye Shiwen, the New Dream Team, Serena Williams, Michael Phelps. They were amazing. We’ve decided that we love the Olympics but hate the coverage. Innocence returns. “The 2016 Olympics will be in Rio,” @avearoo tweets. “I’m going.”

W hen we bitch about NBC’s Olympics telecast, we’re mostly right. The network’s time-bending and heart-tugging is weird. I don’t believe in the “Seacrestification” of NBC — you can’t Seacrestify what was already Teshed. But I don’t really need to watch Ryan Seacrest interview Michael Phelps, either.

No, what’s interesting about NBC-bashing is that it should rise beyond the patrolmen of the sports media beat. What is it about the Games that turns everyone into a critic?

First, the Olympics attract a giant audience — an average of more than 40 million watched the Opening Ceremony on NBC — including a lot of casual fans. It was telling that Steven Marx, the creator of the #NBCFail hashtag, apparently didn’t have access to MSNBC or CNBC through cable or a satellite dish. Some non-sports types might not be used to the … well … excitement of a modern Olympic telecast: NBC’s chipper studio interviews. The patriotic fervor that led some to question why the network didn’t post the scores of the final Russian gymnast in last Thursday’s all-around. The passion of the Costas.

We go ballistic on NBC because we get snowed by the Olympics ideal. We want to believe in “faster, higher, stronger.” In an internationalist jamboree in which the director of the Trainspotting toilet scene salutes the National Health Service. The Olympic ideal might be sanctimonious, and built on a mountain of financial bullshit, but it’s an appealing ideal all the same.

It has nothing, however, to do with NBC. The network paid $1.2 billion for the broadcast rights to the London Games. It’s got to use every trick — tape delay, schmaltz — to recoup its investment. If we get mad at NBC, it’s because we’re staring at the giant gap between ideal and reality. It disappoints us to learn that, for NBC, the Olympics serves the exact same purpose as Sunday Night Football.

Let’s cop to something else: Another reason we go meta during the Olympics is that we often don’t know what we’re watching. BMX cycling, dressage, and water polo may be beyond the comprehension of all but a few diehards, but sometimes so are sports like swimming. It’s hard to explain in 140 characters why Michael Phelps didn’t touch the wall sooner in the 200-meter butterfly. It’s easier — and more fun — to crack jokes about Bob Costas’s height.

Finally, there’s the technology — Twitter — though I think this is misunderstood, too. Olympics spoilers have been around for decades. As far back as the 1990s, there was a raging controversy about SportsCenter anchors gleefully “scooping” their NBC counterparts, who had taken a vow of silence. For decades, sports radio provided real-time Olympics results during news updates. The hosts used to tell you to “turn down your radio” to remain pure.

Twitter didn’t create NBC’s time-lapse problem. But it did create a 500-million-seat stadium in which to vent. Twitter publishes every possible Olympic kvetch, from pushback to NBC’s insinuations about PED use to the complaint that journalists aren’t standing during national anthems. It fulfills, however strangely, the Olympic ideal. We’re united by a single gripe. We’re all Rudy Martzke now.