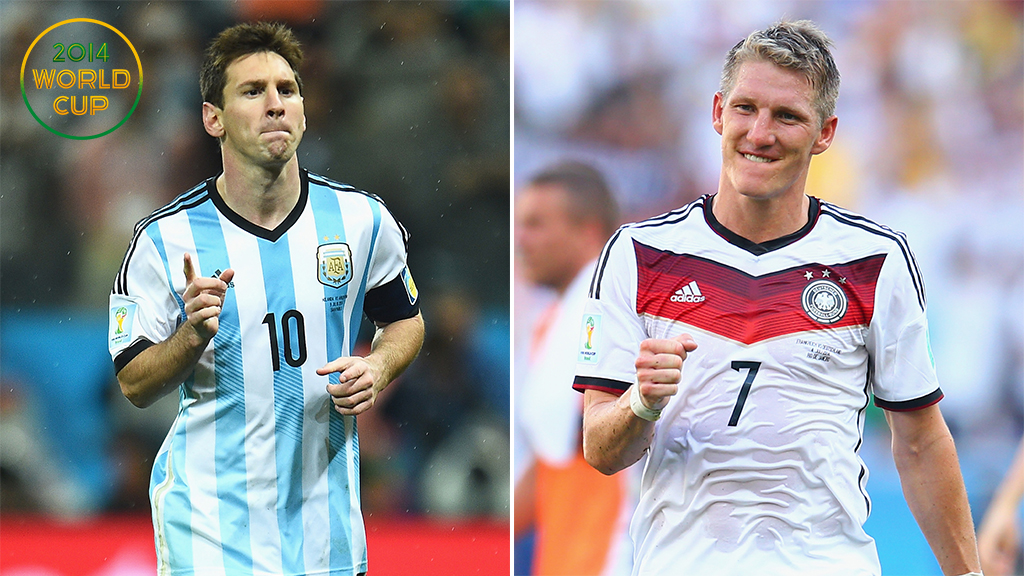 T  his can’t be happening. At around the moment when Toni Kroos fired Philipp Lahm’s cross past the diving Júlio César for Germany’s third goal against Brazil, that thought started blinking in my brain like the red light at the top of a radio tower. This can’t be real. Only a minute earlier, Miroslav Klose had made it 2-0, breaking Ronaldo’s all-time World Cup goal-scoring record in the process; two minutes later, Kroos swiped the ball from Fernandinho, played a one-two pass with Sami Khedira to slip past Dante in the area, and scored again. 4-0 in the 26th minute. This isn’t possible. Three minutes after that, Khedira got the ball from Mesut Özil and knocked it home from inside the edge of the area. 5-0. I’m imagining this. The Germans had scored four goals in six minutes against the most celebrated nation in soccer history, a team that hadn’t lost a competitive match on home soil since 1975. I’m asleep.

This wasn’t a match like other matches, wasn’t a loss like other losses. You could feel it from the nearly 60,000 Brazil fans in attendance, who, by the half-hour mark, were producing a sound that was like the stupefied inverse of a roar. You could feel it from the commentators, in Steve McManaman’s incredulous “look at the space, Ian … look at the space” before Kroos’s first goal, in Ian Darke’s “this is utterly beyond belief” after Khedira’s. You could feel it wherever you were. It was the sense — obviously irrational, tautologically irrational, but still strong — that we were outside the realm of things that can occur.

Brazil doesn’t lose games 7-1. Not at all. Not ever. Certainly not at home and certainly not in the semifinals of its own World Cup. And yet it’s been three days since 7-1 happened — because apparently it really did happen — and we’ve spent most of that time trying to understand what we witnessed. (Witnessed is the word; no one simply saw that match.) The narratives have been picked to the bone. Thiago Silva’s suspension. Scolari’s outmoded tactics. The crushing pressure on the Brazilian players, which led to panic and the collapse of their defense. The focused professionalism of Jogi Löw’s Germany. Most of all, of course, Neymar’s injury, which was already being treated as a near-religious phenomenon in Brazilian culture and which now looks like evidence of some transcendent curse.

Some of this has been maddeningly essentialist — Germany must have been machine-like and efficient, because Germany1 — but then some of the essentialism feels like an epistemic cry for help.

A stereotype is at least something to hold on to. One of the reasons that English-language Twitter was so keen for Brazilians to riot on Tuesday was surely that a flare-lit mob would give the match an external symbol shocking enough to personify it. Without a street revolt, we were left blinking at stats, trying to find some meaningful comparison with a different sport. Or we were left trying to find comparisons with natural disasters and wars, using the language of catastrophe, shame, tragedy, and devastation.

The trouble with metaphor, though, is the trouble with any post facto analysis of a phenomenon like Brazil-Germany. It’s selective. If we say a 7-1 win in a World Cup semifinal is the equivalent of a 47-point NFL road playoff victory, we’re emphasizing statistical probabilities at the expense of both culture and atmosphere; if we say that the clouds boiling on the horizon were portents of angry gods, we’re emphasizing drama at the expense of the fact that Brazil’s execution just really sucked. Most matches fall pretty easily into a particular frame of reference, and so that kind of emphasis isn’t debilitating to understanding. But this was — well, it’s at least not crazy to argue that it was the worst defeat in the history of sports. There’s no easy frame of reference for it. It wasn’t only some of the things it was, it was all of the things it was, and I don’t think you can make sense of it without starting from the total loss of sense that it created as it was happening. 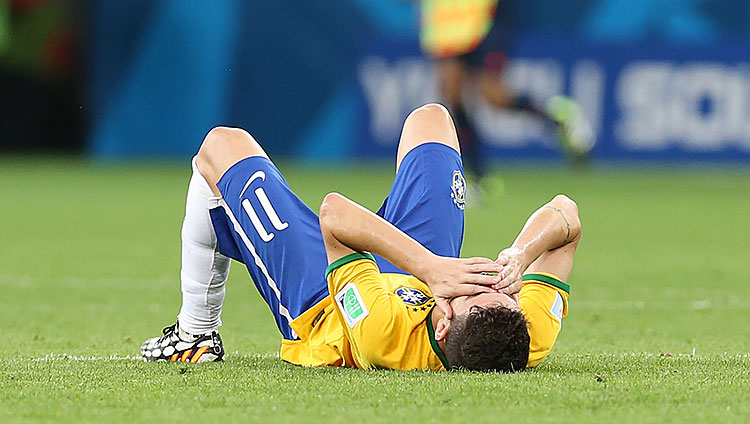 Comparing it to an NFL game doesn’t work, for instance, because no NFL team is fanatically supported by a nation of more than 200 million people. And the Super Bowl happens every year, not every four years. And blowout losses read differently in a sport whose fans are used to, say, FA Cup matches in which smaller clubs routinely hold larger clubs near-scoreless by playing careful defense. And then, I’m sorry, but the scene in that stadium after the match, the intensity of the weeping — and not just the crowd’s, the players’ — did not, in deep and basic ways, resemble a big home playoff loss at Sports Authority Field. You knew as you were watching that Brazilian soccer’s idea of itself would never be quite the same, that the lives of these players would never be the same. I don’t mean in theory, but in practical ways: Fred, for example, will never be looked at the same way again. It was heartbreaking, and at the same time how could anyone play that badly at this level of the game?

There’s no single lens that can clarify what that match felt like or what it meant. Invoking Neymar doesn’t explain it, because Neymar doesn’t stop goals. Invoking Scolari’s tactical shortcomings or Brazil’s talent deficit or Germany’s program-building doesn’t explain it, because we knew about all of those things before the match, and no one, absolutely no one, saw this coming. (If anyone tells you that they saw this coming, don your hard hat and adopt emergency mansplaining-survival protocols at once.) It was everything it was. Eventually people will sift through it, and figure out what mattered most to them, and it will become a story. But for now, the only way to think about it that isn’t fatally distorting is to be a little overwhelmed by it. Anything else is thinking you hear a melody when someone hit all the keys on the piano simultaneously.

Because here’s what Germany did to Brazil over two hours in Belo Horizonte. They produced something so staggering that it still feels irreducible. They left the soccer world functionally speechless. They broke metaphor. They stunned hundreds of millions of people.

That’s one of your World Cup finalists. 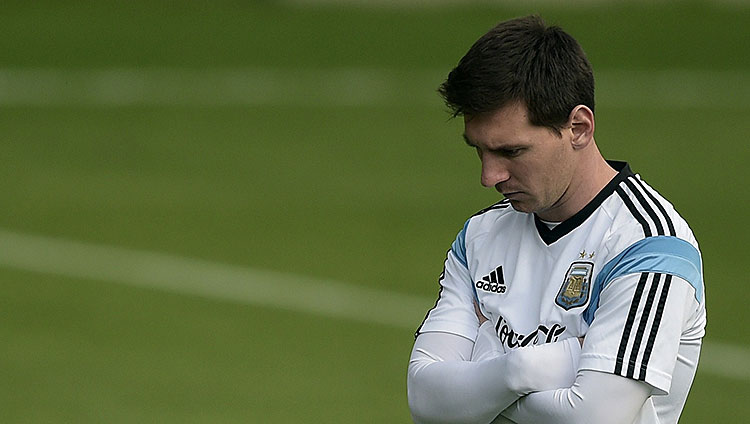 Argentina, though. What a bizarre bunch. On paper, they should be swift and savage and lethal in attack (Messi, Higuaín, Agüero, Di María, exclamation marks) and only OK in defense (Romero, Rojo, Garay). That’s also how they’ve looked for large stretches of the tournament, and yet: They enter the final having conceded just three goals in six matches while having scored just eight. The defensive record is largely due to Javier Mascherano, who’s been a Go master when closing down attackers and a direwolf after reaching them. He has also inspired the sentence “Booking a ticket to the World Cup Final is a dream for any soccer player, but a concussion and a torn anus are a heavy price to pay.” So … does he get the Golden Ball now, or do they save that for after the surgery?

It’s Lionel Messi, though, who has dragged Argentina to the final, calmly making up for weird arrhythmias in the attack caused by Gonzalo Higuaín’s fluctuating form and Sergio Agüero’s and Ángel Di María’s injuries. He has four goals and an assist in six games — remember, Argentina has scored only eight times — and has been essential in ways that those numbers don’t really capture. Columnists who like being dissatisfied with things tend to grouse about Messi during World Cups, as though if he’s not scoring hat tricks made out of bicycle kicks, he must be disappointing. But this totally misunderstands how his role for Argentina has differed from his role at Barcelona. In 2010, for instance, then-coach Diego Maradona’s tactics forced him to drop back into deep space to provide link-up play more or less between himself and himself, which he did brilliantly — and then he was killed in the press for four years for not scoring. This year, with teams keying their entire defenses around him,2 he’s still leading the World Cup in chances created (21) and successful take-ons (39), still completing passes that reconfigure the entire pitch — often, it has to be said, to players who haven’t done anything with them.

But Argentina doesn’t look like Barcelona, and Messi doesn’t look like what you kind of remember Maradona looking like in those YouTube clips you watched a few months ago, and James Rodríguez is fun,3 so these little anti-Messi thought-memes fester around the margins of the tournament. If Argentina loses in the final, especially if Messi doesn’t score, they’ll bubble up into the mainstream. Ignore them. Messi single-handedly got Argentina out of the group stage (scoring one of the goals of the tournament in the process), created the goal that won the first knockout game, scored the crucial first penalty against the Netherlands in the semifinal, went on countless runs through multiple defenders, and spread panic everywhere he went. If Argentina wins the World Cup, it will be because he put the team in the position to win it, and if they don’t — well, he put them in the position to win it anyway.

That’s what Argentina has done in this tournament. It’s been a paradox, an attacking side eking out tight defensive victories, a team captained by a player everyone knows is the best on earth yet one whose legacy is somehow up for reconsideration after every match. Their identity is poised between all-time glory and pitiable letdown, and there is no room at all in between.

That’s your other World Cup finalist. 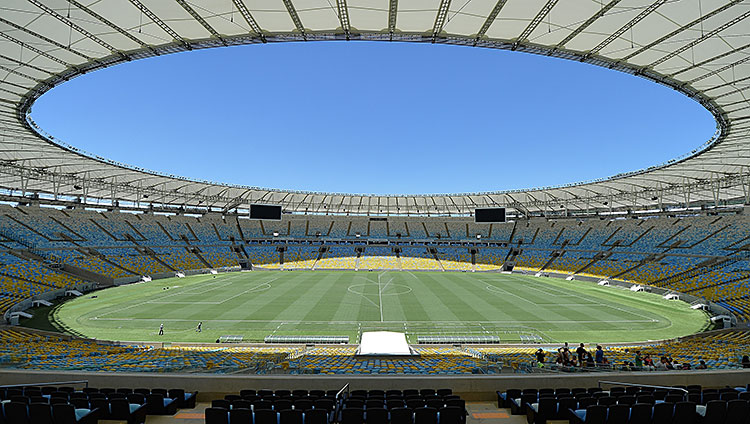 I wrote last week that the only thing this World Cup lacked was a truly great team. I’m still not sure that Germany is one, and I’m completely sure that Argentina isn’t. In a way, though, it doesn’t matter. These teams are playing for equally high stakes. Germany’s 7-1 win was instantly as legendary as many World Cup finals. If it wins the title, it will be remembered in the same breath as the best teams ever to play in this tournament, because you do not beat Brazil in Brazil by six goals en route to a world championship and still get dinged for drawing with Ghana. An Argentina win, meanwhile, not only gives the nation a schadenfreude-laced World Cup championship on the home turf of its continental rival. It also puts Messi beyond even the shoutiest pundit’s efforts to keep him out of the greatest-of-all-time debate.

And that’s what we’re playing for on Sunday. Validation for the best team in the tournament or validation for the best player in the world. In a sense, it’s perfect. Germany has the better squad, Argentina has the best player. Germany comes in after a terrifying rampage, Argentina comes in after holding on for dear life. Argentina, thanks to Messi, has a better chance of producing a moment that feels like magic, but Germany has just done something indescribably astonishing and strange. I think Germany will win, but I have no idea what will happen. I have no idea whether I will even believe it when it happens. After a month of stats, signs, and symbols, I am extremely excited to find out.