Under the Big Top 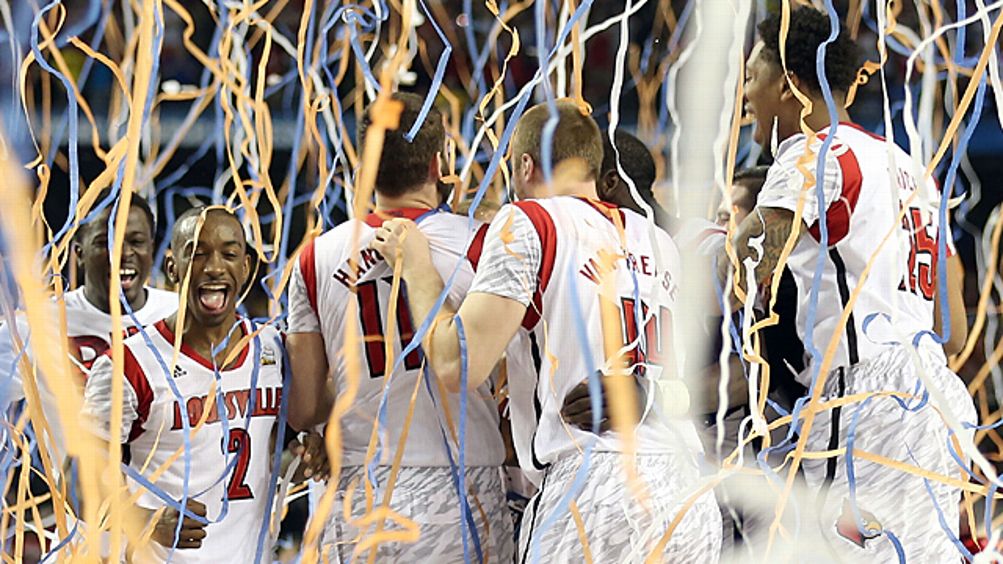 The stories pass in review, one after another, fascinating, and then abandoned in their turn. Luke Hancock, the Final Four’s Most Outstanding Player, with 22 points on Monday night, was a pretty good column for a while, and so was Spike Albrecht, the Michigan guard who made like the genuine Jerry West in the first half and forced us all to start getting briefed on the doings in his hometown of Crown Point, Indiana.

(Crown Point remains most famous for once having had John Dillinger bust out of its renowned “escape-proof” jail. Dillinger made his getaway by stealing the sheriff’s car. Crown Point had itself a rough day back in ’34, and could’ve used a break, history-wise. Alas for it, and for Spike, his heroics expired during halftime. All 17 of Albrecht’s improbable points came in the first 20 minutes.)

There was an infinite opportunity for self-mockery; who was that idiot who said nobody could shoot in domes, anyway? Michigan shot 52 percent for the game, and 55 percent in the second half. There was the long saga of how Louisville coach Rick Pitino obviously should spend Tuesday wandering through Atlanta, looking for wallets on the sidewalk. His horse wins the Santa Anita Derby. He is elected to the Basketball Hall of Fame. His son gets the head coaching job in Minnesota. (Good luck up there, son of Rick. Those people are crazy.) And now his team wins the national championship. 82-76. If he’d have been sheriff in Crown Point 79 years ago, Dillinger would have fallen and knocked himself unconscious on the way out to the car. And there was the Kevin Ware story … no, wait, there was not going to be a Kevin Ware story. Not here, anyway. Besides, I liked it better when I was a kid and they called it The Song of Bernadette.

That was all packaging, though, wrapping actual human drama in glistening emotional bubble wrap. But what’s really important about this tournament goes on in the locker rooms and on the buses and on a hundred cold afternoons in the practice gym, where you decide to trust the other guy. When Louisville needed to pull together, it did not pull together to put on a show. It pulled together to do some work. The game slowed. The Cardinals slowed with it. The game got physical. They punched back. “Just coming from where I come from, Cincinnati, Ohio, the area I grew up in, any kid would want to trade places with me today,” said Chane Behanan, a burly force who was central to what Louisville accomplished. “To have the opportunity to come out here to show my talent, win a national championship with my brothers, it’s unbelievable. I love these guys like they my real brothers. That’s it.”

Ultimately, though, for all of the passing stories and the transitory stardom, and the Shining Moments that came and went, the story turned out to be a Louisville team that was supposed to be a pressing, running, and 3-point gunning squad finding a way to hunker down and slowly hammer the game into the shape it wanted. Louisville won this game in the half court. It won it in the lane. It won it on the glass. There’s some cliché about trenches lying around here somewhere, too, but I can’t find it, so I guess we’ll leave it alone. 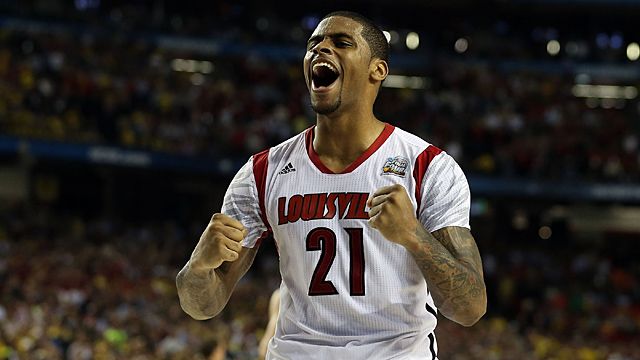 If you want a player, and if you want a moment, shining or otherwise, look back to shortly after the two-minute mark, and look to Behanan, whose 15 points and 12 rebounds all were dearly earned around the basket. Louisville kept building a thin working margin, and Michigan kept knocking pieces of it off. Louisville would come back and run an impeccable set in the half court, usually orchestrated by Peyton Siva, who played as complete a game as a point guard Monday night as he ever has in his life. (He and Montrezl Harrell ran a back-screen play that got Siva a layup and was pretty enough to bring Clair Bee back from the dead.) Michigan was too fast and too gifted offensively for Louisville’s press to trap and, thus, the Cardinal transition game was stymied.

“We told the guys, ‘Hey, you can’t play this like it’s Virginia Commonwealth,'” Pitino said. “If you try and trap them, they will shred you. What we wanted to do with the press was wear their legs out so they couldn’t shoot in the second half. I’m not saying we did that, either, but that’s what we were trying to do.”

So the game went into Siva’s hands, at least after halftime. “This is why I love Coach P so much,” Siva said. “At halftime he kept asking me like, ‘Do you know the plays?’ You keep looking over at me and asking me what plays to run. Yeah, I know the plays. In the second half, he let me call the plays, what I saw out on the court. That’s what I do, try to be an extension of him, try to gather my guys, get them in the right position. As a point guard for this team, it’s my duty to create good shots, take care of the ball, play good ball, play good defense. Coach P kept telling me, ‘Dig in, dig in, dig in.’ They [were] knocking down some difficult shots in the first half. Luckily we wore them down.”

“I was all over Peyton the entire night,” Pitino said. “I thought he’d have to play 38 minutes. He was pressing, running. I knew he was exhausted. I kept saying, ‘You’re out of shape.’ He looked at me and he knew what I was getting at.”

“Coach kept telling him for these last 16 games,” Siva said. “‘Chane, you got to rebound.’ We watched countless number of hours of film on Kenny Faried [the rebounding fool currently in the employ of the Denver Nuggets]. Chane told me before the game. He said, ‘Thank you.’

“He came out today, and he was a man amongst boys on the board. He started [padding] his stats a little bit, trying to miss his layups and get it back.”

In fact, Siva’s conspiratorial musings aside, that’s precisely what happened at a pivotal moment in the game. Louisville was up 76-69, but Michigan’s Trey Burke — who has a lot of Allen Iverson in him, especially in the way he gets slammed to the floor — converted a free throw. Louisville came back down and worked the ball to Behanan, a 6-foot-6, 250-pound barrel of a man who was the dominant inside player all night. Behanan missed the layup. Then he missed the tip-in. Then he got his own rebound back, muscled some kind of a follow-up into the air that looked as though he’d tossed it up there with his bicep. It bounced twice and dropped.

It didn’t make the highlight reel. It was not a Shining Moment. But it was as surely a basketball play as that back-screen play was, or as were any of Hancock’s crucial 3-point shots, or any of the plays made by Spike Albrecht, the pride of Crown Point. And it marked the end of a curious season for Behanan, who started the year on suspension for some bullpucky college-kid stuff, including (apparently) misbehaving on Twitter, which is another problem Adolph Rupp never had to face.

“First and foremost, it’s no serious matters that they got suspended for. Serious enough to get suspended, but it’s something — I’m a big believer in fun, in discipline and love — Chane just needed to grow up … mature as an adult,” Pitino said. “I’ll tell you something about Chane Behanan. When the chips are down, things don’t go well, that young man rises to a new level. There’s no question, when I looked at him today, he shook my hand and said, ‘Don’t worry about me, I’ll bring it tonight.’ He always rises in big games. … He was a monster tonight.”

A YouTube sensation for his thunderous dunks — his jump-over-a-dude slam against DePaul this February already is a legend — Behanan nonetheless bounced in and out of the lineup throughout the postseason, losing minutes to Harrell despite being a starter during Louisville’s run to the Final Four in 2012. “These guys,” he said. “They’re like my real brothers. No, they are. I mean that.” And somehow, the whole noisy mess got itself redeemed for a few minutes, anyway, just as you stopped long enough to watch all the stories go by.

See all House of Cards