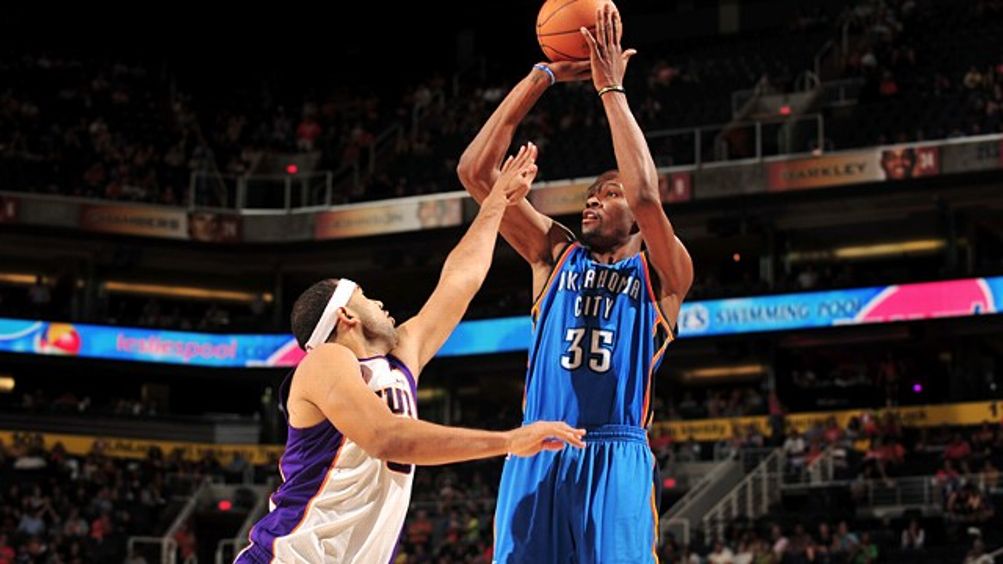 Case in point: Here’s what happened to the Oklahoma City Thunder in April. They went 8-7. They dropped games to the Grizzlies (a potential playoff opponent), Lakers (ditto), Clippers (twice, ditto), and Heat (a possible Finals opponent and onetime rival for the best overall record in the NBA — before April, that is; before the dark times). They lost the top seed in the West to the Spurs, a team led by a fragile core of retirement-home escapees and the front grill of a 1994 Dodge Viper.1 To top everything off, they saw their third-best player flattened by a Metta World Peace elbow so vicious it led to a national discussion about justice, which was nice and everything, but didn’t give them back a healthy James Harden.2

And here, roughly, is how this month felt to Thunder fans:

SCENE. The black shimmering waste of the North Atlantic. An ICEBERG looms against the stars. In the middle distance, a GIGANTIC LUXURY OCEAN LINER, its prow rising from the sea at a delirious angle, slowly and violently sinks. Below, dwarfed by the dying ship, OKLAHOMA CITY THUNDER COACH SCOTT BROOKS bobs in the freezing water, clinging for dear life to the side of a piece of flotsam.

THUNDER FAN [lying atop flotsam]: I love you, coach.

COACH BROOKS: Don’t you say your good-byes. Promise me you will survive. No matter what happens … no matter how hopeless. Promise me …

THUNDER FAN: I … I promise, coach.

Now, objectively, the Thunder’s quasi-collapse wasn’t quite that bad. It’s not as though they suddenly woke up as the Bobcats.3 They’re still second in the West. They still have Kevin Durant (i.e., are bathed in the light of the blessings of the Lord). And Harden is going to be fine. It was one bad month. Nas still likes them for the title! But Thunder fans have just been spoiled beyond belief up to this point. You know how people in L.A. freak out and start complaining when the temperature drops below 60? We’ve had perfect weather for the better part of four straight years. April was basically the first month in the history of the franchise when being a Thunder fan felt kinda bad; that’s how much adversity we’ve had to deal with, riding in the comet’s tail of our overachieving young stars. The team has been cruising on the bright side of expectations for so long that it took this semi-crappy month to make us realize that, oh, right, when you expect a team to be great and they aren’t, it feels … not-good. Really not-good. And that’s what’s been tough about following the Thunder for the past few weeks — not just feeling not-good, but having to remember that feeling not-good is an inescapable part of sports.

April for the Thunder? Call it the Lindsay Weir Transition.4 It’s where the MJ-era Bulls were stuck from about ’88 to ’90, or where the Shaq-Kobe Lakers spent ’98-99.5 (You could read the current Heat as an attempt to bypass the Lindsay Weir Transition by injecting growth hormone into a Blu-ray of Twilight: New Moon, but that’s another paragraph.) One day OKC was happily romping through the league, running up crazy box scores, and going 5-0 against the Celtics, Lakers, Clippers, and Heat in February and March. The next, Westbrook’s shot had gone haywire, the team’s scoring plummeted (to just over 100 ppg in April, from 106.6 in March), and they suddenly went from “tight” to “semi-panicky” at the ends of close games, right as they hit the toughest part of their schedule. It’s not a coincidence that this happened after a season in which the Thunder set the pace in the West for months on end. They’ve hit that near-breakthrough point where they’re getting every other team’s best effort in every game, where they’re always expected to win, and where they have to decide if they’re going to shy away from the pressure or aim square at the other team’s windpipe night after night. And they don’t know yet. Hello, LWT.

In retrospect, you could see this developing as early as the All-Star break. OKC got fantastic results in March, but below the scorelines there were a lot of dumb little signs that things were starting to go wrong. They started needing fourth-quarter rallies to overcome horrible starts — against the Mavs, they opened 3-for-11, trailed by seven at halftime, never figured out how to cope with the zone Rick Carlisle threw at them (Durant kept feeding bounce passes into it and finished with seven turnovers), and needed Defcon 2 defense from Kendrick Perkins to hang on for a 95-91 win (in a home game in which the last five points were Thunder free throws). The defense became totally unpredictable, looking all-world one quarter and then disappearing the next, a situation that was highlighted by the Thunder giving up 13 fourth-quarter points (and 30 overall) to Josh Smith in a deeply random 90-97 loss to the Hawks. Late in games, Scott Brooks’s brain sometimes froze as complexly as his hair mousse6 — he never seemed totally sure whether he wanted to isolate Durant, run a play, or let Westbrook try to destroy the world from the top of the key.

The “start sloppy and work it out as you go” approach (© every Shaquille O’Neal season, 2004-11 inclusive) worked out okay in March, but it turned into a problem in April, when the Thunder looked openly perplexed a lot of the time. The offense, always the team’s fallback strength, suddenly dropped into an LWT funk: lazy ball movement, bad shot selection, the works. Everything — Westbrook drives, Durant 3-point attempts — started happening too early in the shot clock, as if, as one Thunder podcaster put it, “the Thunder are trying to create transition-like scoring against a set defense.” (Result: 18 offensive rebounds surrendered in a five-point loss to the Pacers.) Serge Ibaka started scowling, Perkins started ultra-scowling, and Nick Collison just looked scared. Derek Fisher put on his glassiest “I am locked in a behind-the-scenes NBPA power struggle” face.7 The most fun team in the NBA was out of step and in a bad mood, and the gloom was only deepened by the implacable march of the Spurs, an unholy army of decaying zombies risen from the grave to feast on the flesh of live children a team of consummate grown-ups.

The NBA isn’t mysterious, except when it is. OKC is finding out that being a favorite feels different from being an upstart, that there’s an extra gram of moment-to-moment pressure that goes along with landing on everyone’s list of title contenders, and that it’s easy to make mistakes when things get weird. The good news for Thunder fans is that there’s no path to a title that doesn’t run straight through a phase like this. If Oklahoma City is going to become a great team, which is not in any way guaranteed but which is within their field of possibility, they’re going to have to get used to things being weird, and to dealing with enhanced pressure. They’re going to have to commit to playing defense on every possession, because even though it’s a cliché, this is the NBA and that’s how you ruin people. No team just automatically gets that stuff; it takes a light-bulb moment, like when a teenager decides to back off the drugs now in order to do better drugs after law school.

And given the current state of the league, where there really aren’t a lot of elite squads that have mastered their own Lindsay Weir Transitions (the Bulls, no; the Heat, see above), OKC is better off facing this now than a couple of years from now. The post-LWT teams that matter, e.g., the Lakers, Celtics, and Spurs, are potentially formidable playoff opponents, but they’re also starting the “you chose poorly” knight from Indiana Jones and the Last Crusade at small forward and could crumble into dust at any moment. And unlike some LWT squads, the Thunder know exactly what they have to work with: two superstars, a near-superstar bench scorer8 who keeps everybody else loose, a couple of physical defenders (one of whom, Ibaka, can go for 18 when he feels like it), an assortment of versatile role players (Thabo Sefolosha, Collison, Daequan Cook), and the potentially decisive X-factor of Cole Aldrich’s haircut. Lingering Durant/Westbrook balance questions aside, they know how they want to play, how they can score, and how they’re going to win. It’s just a matter of finding that inner gear of murderousness that makes everything else work.

And no, not every young team finds it. But as a Thunder fan, I’m trying to stay cool and look at April as a step back that was necessary to take a big step forward down the road. The first round of the playoffs is going to be fascinating, especially if OKC winds up playing the Mavs, a crumbling post-LWT champion that could force the Thunder to grow up or die trying. Anything could happen over the next few weeks. The Thunder could crash out of the playoffs in the first round,9 win the title,10 or crash out of the playoffs in the first round and then win the title next year. And that, ultimately, is part of what’s so fun about following them. It sucks to be reminded that feeling not-good is a part of sports, but with a team as electric and likable as the Thunder, it’s worth it for the possibility of feeling just extremely not-not-good a little later.