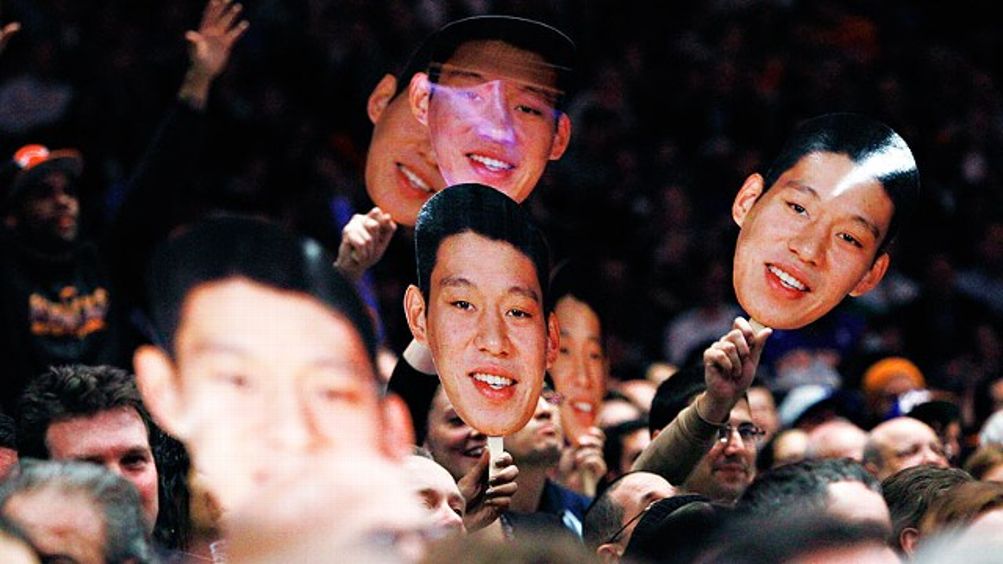 If I can indulge myself for just a moment, I’m feeling a little postmodern this morning. It’s nothing that should bestir the culture warriors. It’s just that I’m supposed to have a “take” on this whole Jeremy Lin business and, frankly, I don’t have one. So I’m going to write up my take on not having a take. On this one, I’m Bogart in the faculty lounge, a couple of slugs of bourbon and four Gauloises into the evening, waiting for Bergman to finish up her lecture on Derrida and stop by for a nightcap.

“I’ve heard a lot of stories in my time. They went along with the sound of a tinny piano playing in the parlor downstairs. ‘Mister, I meta man once when I was a kid,’ it always began.”

(If you’re keeping score at home, that is the leader in the clubhouse for Worst. Casablanca-based. Joke. Ever. Nominations are still open, but damn … )

I think I’m on pretty safe ground in doing this. After all, so far, since Lin’s improbable rise to fame and glory with the New York Knicks, we have had so many misbegotten “takes” on the poor guy that it’s a wonder he can get out of bed in the morning, much less play NBA basketball at the level he’s playing right now. In the New York Times, David Brooks, a man who could drain the fun out of a $200 million Powerball prize, decided to point out that Lin was a dude in flux, as Natalie Portman says in Beautiful Girls, caught between what Brooks saw as the narcissistic demands of his sudden fame and what Brooks believes are the doom-ridden prerogatives of his Christian faith. I swear to some god or another, even the Puritan fathers would have thrown Brooks overboard for being a downer long before they ever passed the Azores.

The Accelerated Age has taken the phenomenon out of the phenomenon of being a phenomenon. It used to have some build to it. It used to take a while. Even the simultaneous ascendancy of Magic Johnson and Larry Bird seems today as though it came to us all by wireless radio. Now, anything great that happens suddenly becomes so freighted with instant significance that the essential parts of it that are not crushed entirely are simply buried. In the case of Jeremy Lin, it took almost no time at all for the phenomenon to become commodified. He’s already become a self-contained universe of images, most of which he did not seek, and none of which are under his control. He’s been made into a vessel into which people have placed the precious illusions that they’d otherwise keep protected in bubble wrap and romance, deep in their childhood hearts. He’s come to symbolize everything about sports that nostalgics need sports to symbolize. And he’s trying to learn how to succeed as a point guard at the highest possible level of his sport — and that has to be the hardest part for him.

(In this discussion, I specifically exempt what Lin has come to symbolize to the Asian American community in the United States, for reasons that should be obvious to any fair-minded person. To that community, this is a genuine event and should be celebrated as such — which is why the various racial stupidities that elsewhere have attended Lin’s rise rankle as deeply as they do. For the love of god, people, it’s 2012.)

Can’t he just be a player now, for a while, anyway? Can’t he learn how not to turn over the ball nine times in a game? Can’t he learn that he can’t just pound the ball on the perimeter the way he does? Can’t he have some space to figure out for himself and his teammates how things are going to be for the Knicks when they get their entire roster back together and everybody has to adjust, especially him? These are not easy lessons. Can’t people simply refrain for a while from using him and his success as an excuse to take their pet theories about America out for a walk around the various green rooms and radio studios?

OK, part of it is the fact that this is all happening in New York, and it’s impossible to do anything spectacular in New York without turning your life into a brass band. However, out in the dim lands beyond the Hudson, it really is time for people to step slowly away from the vehicle into which they’ve turned Jeremy Lin’s life — the one in which they use him like a pickup truck to carry What It All Means. One of the great things about this country is that we all get to create our own Americas, which means there are always millions of them operating in the same space. (Critic Greil Marcus once described one of the best of them, the America captured by Bob Dylan and The Band on The Basement Tapes, as “the old, weird America.”) Your America may not be my America, and it may not be Jeremy Lin’s America. But we have to be extremely careful about blundering into his America because we want to hijack his success into our own.

Long ago, right when he was beginning his career, Shaquille O’Neal once told me, “Look, I know people are going to make a cartoon out of me. The important thing is to control your own cartoon.” (This marked Shaq as a mind worth watching.) The construction of the Jeremy Lin cartoon continues apace. He’s an example of the Melting Pot, in a country where the situation for most immigrants is bad, and, in many places, getting worse. (For, say, people picking fruit in Alabama, the melting pot is more like a roasting pan.) He’s a Man Of Faith, a Tim Tebow for another sport and another season. (Two major differences: Lin hasn’t yet put his faith in the street by doing television commercials for it, and Lin can, you know, actually play.) He’s the new King Of New York, which has needed a basketball hero, largely because it is New York and it has the impulse control of a toddler, and it wants what it wants when it wants it. He’s an excuse for racist performance art, and he’s the occasion for yet another tiresome debate over “political correctness.”

It is going to take a formidable effort for him to control the cartoon that is already under construction, no matter how flattering and well-intentioned that cartoon may be. It is going to take a formidable will for him to keep from becoming the symbol other people want to make of him for their own purposes. It is going to take great strength to maintain the reality of who he is in the face of all the noise coming from all the folks who want him to be who they want him to be. I wish him that will and that strength. I wish him as simple a life as he desires. And, because of that, and while I have a “take” on what has been done with Jeremy Lin over the last golden month of his life, I have none on what Jeremy Lin has done. His basketball career is finally off to a terrific start — that’s all I know and all I need to know. I don’t need a symbol. I don’t need any more signifying in my life. None of my damn business, if you want to know the truth of it.