Ben Hogan Isn’t Walking Out of That Sand Trap 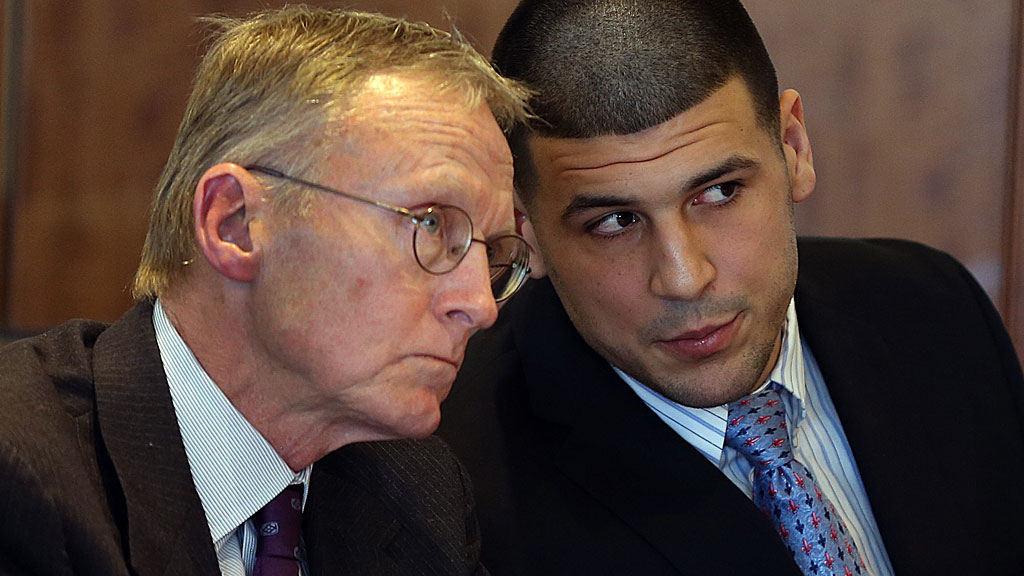 On February 25, not long before the opening of the NFL’s free-agency period, Aaron Hernandez got into a fight with another inmate at the Bristol County House of Correction and Jail in North Dartmouth, Massachusetts. As nearly as can be told, Hernandez won the fight. One of the ways we can surmise that is that they filed a complaint to charge him with assault. This will now be added to his rap sheet with the previously filed charges of first-degree murder and weapons violations in connection with the death of Odin Lloyd. It may yet be followed by charges in connection with the deaths of two other men in the South End of Boston in July 2012.

Aaron Hernandez is the unacknowledged ghost haunting the NFL’s offseason. His absence has to influence how the Patriots prepare for the upcoming draft, and it has surely affected the team’s approach to free agency, which begins Tuesday. But his name will not be mentioned. And, unless he cuts a deal with the prosecutors, and this whole case goes away before next autumn, he will haunt the regular season, too. If he doesn’t cut the deal, then he goes to trial, and Aaron Hernandez could become the Rae Carruth of his time, or the Oscar Pistorius of the United States.

Consider the possibilities that arise from just the bare bones of the story. Hernandez, who was on the verge of becoming a star, and who had just signed a five-year, $40 million extension, is charged in a man’s homicide. Later, we learn that authorities believe his motive may have been to shut that man up, for knowing too much about two other deaths in which Hernandez may have been involved. If these allegations prove true, it means, among other things, that Hernandez played the entire 2012 season after having known of the homicides. Now, he gets back into the news because of a jailhouse beatdown. Nobody wants to talk about Aaron Hernandez, who has pleaded not guilty. They do not want him in the news.

The New England Patriots do not want this. The National Football League does not want this. Both entities have done a masterful job of burying the case in the public mind. There is no question that the absence of Hernandez — especially with the injuries to Rob Gronkowski — materially affected the New England offense last year in every game the team played. Tom Brady was throwing to a receiving corps made up of Julian Edelman and the taxi squad. Hernandez was a gifted receiver in that he was able to play both wideout and tight end. Brady and the Patriots were desperate for exactly that kind of player. And yet the year went on, and the name of Aaron Hernandez rarely was mentioned. He is a nonperson now, living out his life in the shadowlands of celebrity. To mention him is to bring up all kinds of inconvenient questions that chafe the league’s publicity thumpers raw.

The one press conference the Patriots had on the situation, held shortly after Hernandez was led out of his mansion in handcuffs on live television, was a masterly performance in lawyered-up weasel-speak. Bill Belichick refused to say whether he or anyone else in the Patriots’ front office expected to be subpoenaed or if they had retained counsel. (I would almost guarantee they have, because none of them arrive at work on a turnip truck.) Then there was nothing said about him by the team again, all season, as New England’s offense sputtered and Brady looked like Picasso forced to do billboards.

This is understandable institutional caution. There was very little the team could say about Aaron Hernandez, whose life is now completely out of his own hands. The same goes for the NFL, which would not like to spend any time on this case at all, not when the entire league is turning itself inside out on the subject of violence, both on and off the field. This is a tenable position for both the team and the league at the moment, but it may not be for long. The closer the case gets to trial, and the further it gets from being resolved without one, the louder the circus calliope will play.

The radio silence cannot last forever. The case is too big and too baroque now. As a crime, it is fairly spectacular all of its own self. Star athlete is accused of killing a man because the man knew too much about two other men whose deaths the star athlete may have been involved in. (Why, oh, why is Law & Order off the air?) Further, it jumps on all the hot buttons with seven-league boots. Already, we have had Aaron Hernandez as a tin-pot morality play about the gangsta life. We have had Aaron Hernandez as a cautionary tale of the dangers inherent in drafting players, as though turning human beings into fungible commodities for the purpose of mass entertainment isn’t strange enough all by itself. I guarantee you, as the case goes forward, there will be no danger of running out of narrative frames within which to wedge the story. The case touches every aspect of what the modern sports-industrial complex has designed itself to be.

Consider what has happened just in the last couple of weeks, after news got out that Hernandez had been involved in the disturbance at the jail. Everything else came back into play. Local TV ran with the story, and all its component parts — including the South End killings, for which Hernandez has yet to be charged — got a full, breathless re-airing. That is what happens today. We live in an age of reiteration. It is what we have these days instead of the dunking stool, the pitch and feathers, and the public pillory. Horrible events run in an endless loop. Victims have to relive the crime and play their part in a voyeuristic public drama, over and over again. This is the case when there is nothing new to report, but it is especially the case when there’s just a little bit new to report, and there is still more time, more space, more air to fill.

Aaron Hernandez is invisible now. He is on lockdown in a local county jail in Massachusetts. On the outside, he is nothing more than a symbol out of which people will make what they will. He is something mutable, something beyond the human. As an actual person, he does not exist, and he will not exist until the next new thing happens in his story, and then he will be the real person again, over and over. This is how we create the media spectacular. This is what will happen if Aaron Hernandez goes to trial.

They will ask what the Patriots knew about Aaron Hernandez and when they knew it, and whether they suspected he might have been playing the 2012 season after having known of two homicides. They will ask what the league knew and when did it know it, and how did the league fall down on the job of protecting the world from Aaron Hernandez. This will not be entirely fair, but that’s the way it will go. There will be learned disquisitions about dehumanization and hysterical debates about body art. In South Africa, at the trial of Oscar Pistorius, a judge has decided that portions of the trial should be televised, giving many South Africans their first look at how their country’s system of justice operates. The courtroom is crammed with international press, and the proceedings were already once disrupted by a reporter’s computer. That’s in Pretoria, in South Africa. What do you suppose the extended trial of Aaron Hernandez in Boston is going to be like? Here’s a hint: Once, when I was covering the sanity hearing of serial cannibal murderer Jeffrey Dahmer in Milwaukee, the trial was briefly delayed because a guard at the jail where Dahmer was being held was caught selling the murderer’s autograph. That’s what it’s going to be like.

Aaron Hernandez is invisible now, and that’s where all the powers that be in his previous life would like him to stay. But he is an actual person, and an alleged killer, and possibly an alleged multiple killer, and not all the corporate spin in the world can wash that away. He is a mirror to his sport, and he is a gateway to a lot of things the NFL would rather not know about itself. And, in the shadowlands of celebrity, the circus calliope begins to play.