The Miseducation of J.R. Smith 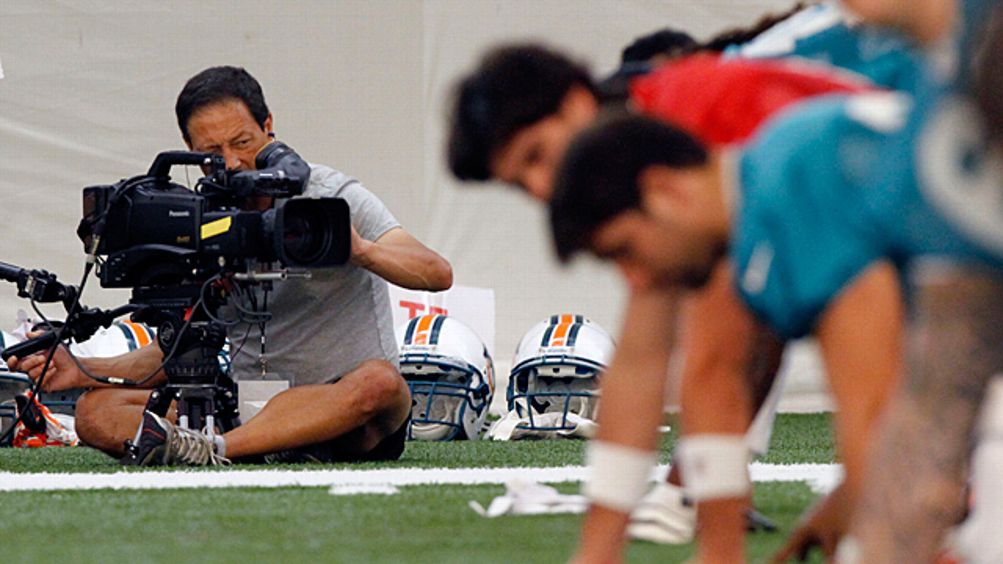 Scene: In Vegas, around the hour the craps tables are filling with fresh meat, a boxing trainer sits in a gym. He picks his front teeth. When his phone rings, he knows it’s his young champion — actually, a member of the champ’s entourage — telling him there will be no training tonight. You catch a look on the trainer’s face. The look says his fighter is going to get his head knocked in, and the trainer might not even mind.

Scene: It was Ozzie Guillen’s eyes that betrayed him. Normally his eyes are almost dead, even when Ozzie’s saluting Castro. But when Ozzie heard the team president say the word “suspend,” he squeezed them shut. When he heard “five games,” his eyes got as big as home plate.

Scene: “I wish it was different.” The wide receiver said nothing. “It’s not good news.” Still nothing. “I’m certain you can overcome this thing.” At that moment, Chad Johnson had two problems. He’d lost his job. And his greatest weapon, his language, had been put on the PUP list.

Not bad, huh? Wish I’d written that stuff. It all comes from reality TV: from HBO’s 24/7 and Hard Knocks series, and Showtime’s The Franchise. I take no pleasure in being the schmuck writer who points out that TV sports documentaries — also called “vérité sports” — have gotten really good. And not just good, but observant. TV is recording the small, telling details of an athlete’s life, capturing noisy moments and quiet moments, doing the delicate labor that sportswriters — if properly motivated — pride themselves on doing. So on behalf of writerdom, I ask: What the hell is going on?

When sports television roared to life in the 1950s and ’60s, print reporters regarded microphone-toters as their idiot cousins. TV fussed over winners; TV made a devil’s pact with leagues by paying rights fees; TV accepted a sound bite in lieu of real insight. “If television ever grows up to the point where it asks adult questions of the competitors,” sportswriter Leonard Shecter wrote in 1969, “there will be no function left for the newspapers but to enshrine what has already been said on television.”

Sports television wasn’t always so dumb. There was Howard Cosell, NFL Films, Roy Firestone and his tearjerkers, Outside the Lines and Real Sports, and a murderer’s row of word whizzes that ran from Red Barber to Marv Albert. But what the TV crews didn’t do — at least off the field — was play small ball. Gay Talese followed Floyd Patterson after a loss to Sonny Liston and recorded the details of his deflation; television producers would have plopped Patterson in a chair and hoped he’d cry.

Within a few decades, sports TV began to show signs of real curiosity. In 1982, a director named Mike Tollin embedded with Rickey Henderson during his 130-steal season. “There was no such thing as reality television,” Tollin says now. “It was under the aegis of documentary filmmaking, which sounded safer and less threatening.” The Henderson show never found a buyer, but Tollin went all-access again three years later with the Tampa Bay Bandits of the USFL. His film, The Final Season, had elements we associate with the new TV sports docs: Tollin filmed Bandits owner John Bassett’s cancer treatments. Steve Spurrier, then the Bandits’ coach, got so fed up with the cameras that he took to leaving his wireless microphone in the bathroom. So Tollin and his producers attached a mic to the shoulder pads of Tampa Bay’s third-string quarterback, who stood close enough to the Old Ball Coach to capture his every word.1

It wasn’t until the 1990s, when reality TV became a thing, that producers could sell cable networks on sports series. The Osbournes begat Joe Philbin. But the new sports docs — which also include ESPN’s 30 for 30, NBA TV’s The Association, Fox’s Being: Liverpool, HBO’s On Freddie Roach, and various promos from the UFC — tend to be, with few exceptions, Very Serious in Tone. They’re studies of a working life: one that’s doomed to end in injury, trade, or lack of talent. It’s no wonder the narrators (Liev Schreiber on Hard Knocks, Clive Owen on Being: Liverpool) go John Facenda rather than Chris Harrison.

The key question — “How do they get great stuff?” — has a simple answer. The producers are in business with the leagues. The NBA produces The Association and airs it on NBA TV. NFL Films’ Ken Rodgers, who has been the supervising producer of the last six seasons of Hard Knocks, says, “We talk with teams right away as a company, a fellow company of the NFL.”

Similarly, when Mike Tollin was dreaming up The Franchise with Showtime executive David Nevins, they decided they needed to partner with Major League Baseball. It not only solved the problem of acquiring footage, but it put nervous players at ease. Danny Field, a field producer on The Franchise, says, “I come in almost every day with an MLB production hat, the same logo that’s on the back of their hat.”

Producers realized athletes, like actors, let their guard down when they’ve got something to sell. So on 24/7, Julio César Chávez Jr. parades around in pink bikini underwear in hopes that this will get viewers to buy his pay-per-view fight. The Miami Marlins wave in The Franchise’s cameras as they begin play in a new stadium with nearly $200 million in new contracts — even though the show, as it turns out, will document the roster’s dismantling.

A sportswriter might sniff at such a partnership. But the docs have reset the rules of covering athletes. Jim Bouton would have been exiled to Canada for revealing the kinds of things that are typical on any one episode of Hard Knocks and 24/7. This is an era in which a players-only meeting includes players and TV cameras.

Watching Chad Johnson get cut on Hard Knocks almost felt like trespassing. Roster moves are usually entombed in cliché. (After meeting with Johnson, coach Joe Philbin droned to the local media, “With any type of these decisions, it was not an easy one.”) But here we were in the room and on Philbin’s couch — and from a writerly perspective, at last realizing Shecter’s prediction about merely transcribing what we saw on TV. The access was so complete it was nearly immoral.

But with Hard Knocks, moral questions were settled before training camp even started. The NFL Films crew had gotten the OK to film anything and everything. When Philbin showed Johnson into his office, producers didn’t need to ask either man for permission. They merely activated a robotically controlled camera that had been mounted in Philbin’s office for weeks.

When Miami closer Heath Bell confronted Ozzie Guillen on The Franchise, camera guys were already in his office, bullshitting with the manager. Bell was so eager to get something off his chest, producer Danny Field reports, that he ignored the film crew and launched into his complaint.2

Both The Franchise and Hard Knocks allow their subjects to watch rough cuts of each episode. But producers say management usually uses its removal rights only on stuff that affects competitive balance: coaching signals, play diagrams, etc. (The Houston Texans’ J.J. Watt, who had 1.5 sacks against the Dolphins in Week 1, said Hard Knocks helped him learn Miami’s snap counts.)

This is telling, because it suggests that while what we’re seeing is private in the Ball Four sense, it’s not exactly a trade secret. “It’s not like we’re going to give the ingredients that go into Pepsi and have the people from Coke watching,” says Miami Marlins president David Samson, who became a major character on The Franchise.

Both producers and subjects insist TV sports docs are real. “We never staged anything,” Samson tells me. “We never had a moment and said, ‘That moment was great, let’s get the cameras in here and do it again.'” But as Tollin, The Franchise’s executive producer, puts it: “If you know two guys are having an issue and it’s probably going to come to a head and they’re probably going to talk about it … is it OK to suggest they might talk in this place at this time where the camera might be? My answer would be ‘yes.'” In a conventional reality TV show, a producer might say, “Go confront your momager.” In sports reality TV, a producer might say, “If you’re going to confront your manager, could you do it around 4 p.m. and let us come along?”

The portraits that emerge from these shows — of Johnson and Samson and Chavez Jr. — are fairly complicated. Or, you might say, withering. In either case, they’re the most complicated/withering portraits that sports teams have ever signed off on.

So what happened? “I think a lot of it is the 21st century kicking in,” says Field. In the era of fantasy sports and endless trade rumors, we’re fascinated about how teams are put together. So why not show the Marlins brass talking about their veterans “crapping the bed”? The comparable literary account is Michael Lewis sitting in with the A’s scouts in Moneyball.

The other part of the 21st century that kicked in: We have now seen Brett Favre’s non-tumescent penis on the Internet. Thinking of the clubhouse as the Kremlin is ludicrous. Better for an athlete to reveal his flaws and, with an assist from producers, craft a warts-and-all portrait that will actually charm fans.

That’s what so striking — and, for me, jealousy-inducing — about shows like Hard Knocks and The Franchise. The leagues have finally realized that players are more appealing when they have problems with their bosses, when they get fired, when they wander around in pink underwear — when they show the world that the guy underneath the jersey is a fuck-up just like the rest of us. To which a sportswriter, trying to peek inside the clubhouse without a robotic camera, might add: This is what we’ve been saying all along …