The Conservative Case for Football 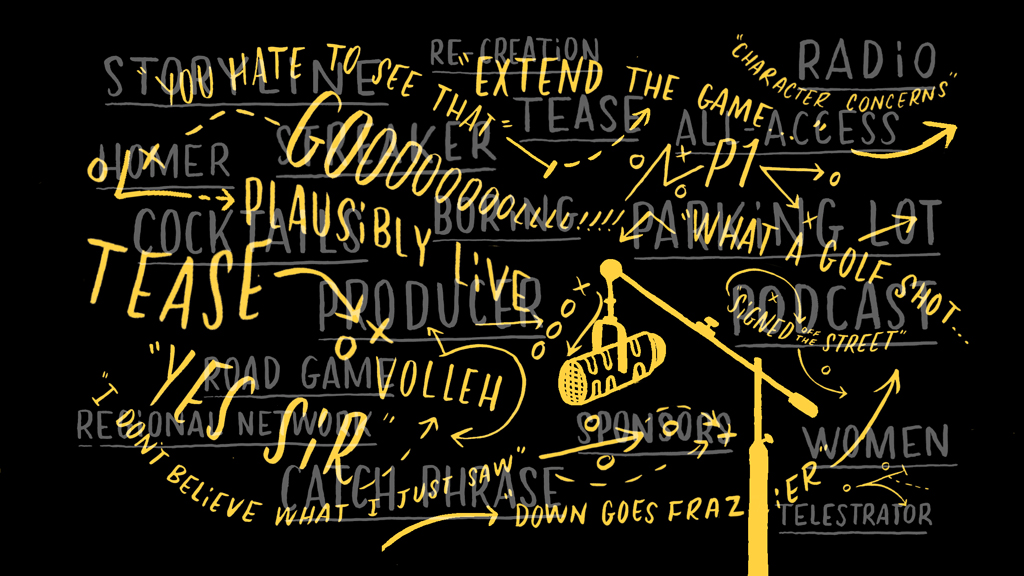 Last year, I compiled a Devil’s Dictionary of Sportswriting. Since then, Grantland has added more glossaries covering the NHL, MLB, and professional wrestling, among others. But Ambrose Bierce, who wrote the original Devil’s Dictionary, might have been most attracted to the language of sportscasting, which meets his definition of “entertainment” — that is, “any kind of amusement whose inroads stop short of death by dejection.”

all-access (adj.) — A type of sports documentary, like Hard Knocks or 24/7, notable because it is one of the few vehicles in which athletes offer the press any access.

“As we were saying earlier … ” (exp.) — Phil Simms’s way of reminding you that he finally got one right.

boring (adj.) — A boxing announcer’s quality can be measured by his willingness to admit that a major fight is a dud. Larry Merchant, after Round 2 of the 1988 Mike Tyson–Larry Holmes bout: “So far, this is a fight only the American Medical Association could love. Also my wife, who hates violence.”

catchphrase (n.) — In the late ’90s, SportsCenter’s Dan Patrick and Keith Olbermann had a whopping 76 catchphrases in circulation. They explained that catchphrases bought them time to think during rapid-fire highlights, and weren’t just comic ends in and of themselves.

cocktails (n.) — Producer Terry O’Neil, 1989: “Alcohol was the lifeblood of the old CBS Sports. [Pat] Summerall and [Tom] Brookshier regularly drank their way through the 4 p.m. football telecasts. After all, it was cocktail hour.”

color man (n.) — An announcer, usually an ex-athlete, who is game-smart but word-dumb. Buddy Blattner on Dizzy Dean: “One day, on Mutual’s Game of the Day, he actually did a half-inning of polished play-by-play. Then, between innings, he told me, ‘That’s enough a’ that poop. Now Ol’ Diz is gonna make some money,’ and proceeded to butcher the next half-inning absolutely beyond repair. He winked ’cause, boy, he knew people loved it — guys returning to their ‘respectable’ positions … ”

crawl (n.) — The part of the television screen where fantasy news breaks.

debate (n.) — A philosophical inquiry into sports that is limited by the size of a chyron.

“Down goes Frazier!” (exp.) — Howard Cosell’s famous call in the ’73 Joe Frazier–George Foreman fight was actually a parable about broadcast rights. Cosell’s words weren’t heard until five days after the fight, when it was rebroadcast on ABC’s Wide World of Sports. The unmemorable live call was handled by Don Dunphy and actress Pearl Bailey.

ensuing (adj.) — “Next” should never describe a kickoff when “ensuing” is available. (Thanks to Drew Shirley.)

“Extend the game … ” (exp.) — A color man’s advice to a football team down by a touchdown and a field goal, and the network’s ad-sales team’s advice to same.

gaffe (n.) — When an announcer has the bad taste to say on TV what a million viewers just said on the couch. See Troy Aikman, among many others.

“Gooooolllll!!!!!” (exp.) — Soccer scream popularized by Angel Fernandez, the Gus Johnson of Mexico, and then spread further across the Americas by many announcers (especially Andrés Cantor). One Fernandez obituary noted: “They say he made a bad soccer game something incredible.”

“Great decision … ” (exp.) — A football pass tossed safely out of bounds or a fast break called off before a shot is taken. For an announcer, a great decision is when a player stifles his ego; a “poor” one is when he indulges it.

homer (n.) — An announcer who’s having a consensual relationship with a ballclub.

honey shot (exp.) — An image of a pretty woman in the stands, usually without narration, that was created by ABC’s Andy Sidaris. When Brent Musburger gushed about Katherine Webb in 2013, he was adding cast-and-crew commentary.

“I don’t believe what I just saw!” (exp.) — What Jack Buck said after Kirk Gibson’s homer in the ’88 World Series. But the notion of disbelief stretches from the Shot Heard Round the World (“I don’t believe it!”) to the Miracle on Ice (“Do you believe in miracles?”) to Abby Wambach’s equalizer (“Can you believe this?!”). An announcer who has called a thousand ballgames can believe just about anything. But at the crucial moment, his job is to affect disbelief — to give voice to our stupor.

in-depth (adj.) — A warning that a TV segment will last more than 30 seconds.

insider (n.) — A print reporter who appears on TV, or a TV reporter with a face for print.

“Inside the octagon!” (exp.) — A phrase yelled a dozen times during a UFC pay-per-view, in case our minds should wander to some distant hexagon.

jockocracy (n.) — Popularized by Howard Cosell, used to describe the junta of ex-athletes on TV. These days, the jockocracy’s unifying passion is a resistance to sabermetrics.

lay out (v.; archaic) — To risk that a great moment in sports will be remembered for the action rather than the call.

“Men and women who make it possible … ” (exp.) — The behind-the-scenes weevils of a sports telecast. We see their faces only when they work holidays.

neutrality (n.) — Dick Enberg, 2004: “On the air, it’s as if somebody draws a heavy drape to block any bias. I don’t even feel it inside. It’s the same curtain that keeps you from swearing. I’ve known broadcasters who can’t get one sentence out in normal conversation without being profane, and yet, they can go on the air and talk for three hours and never slip once.”

Olympics, the (n.) — A broadcast every American hates and watches with equal devotion.

P1 (exp.) — A listener for whom the local sports-talk station serves as an interior monologue. KTCK in Dallas made it a term of affection.

“Pandemonium!” (exp.) — Loud cheering. Like a kickoff, it may ensue.

panelist (n.) — A man who is paid to be angry at another panelist.

parking lot (n.) — A place where fans grill sausages while the logos of NFL sponsors obscure their faces.

plausibly live (exp.) — The process by which a game played in an inconvenient corner of the globe is taped and shown later, usually in prime time, to Americans. Mostly extinct except for the Olympics, where Philip K. Dick time-slipping prevails.

play-by-play man (n.) — An announcer who recognizes a holding penalty about 10 seconds after you do.

producer (n.) — Frequently, a man whose professional modesty prevents him from wearing a hairpiece but doesn’t prevent him from insisting his name appear onscreen.

putt (n.) — CBS golf producer Frank Chirkinian: “You don’t have to tell people what they can see. Tell ’em something they can’t see. People can see that a golfer made the putt. If I ever hear you say, ‘He made the putt,’ I’ll fire you on the spot.”

real name (n.) — What an announcer was called by his mother; or a name that producers (and sometimes the announcer himself) think America is too unsophisticated or prejudiced to hear. Thus, audiences never met Harry Carabina, Melvin Israel, or Dan Pugh. The Yankees once suggested to Pete Van Wieren, who later called Braves games for TBS, that he change his name to “Rock Dagger.”

re-creation (n.) — The now-defunct art of “calling” a game from a remote bunker based on wire reports. Ronald Reagan, who did some sportscasting, liked to tell a story about the time his telegraph conked out and he had to invent the action. This reflected poorly on the Gipper as a politician but well on him as a sportscaster.

regional network (adj.) — A cable station that keeps medium- and small-market baseball teams afloat. Everyone who visits postgame locker rooms knows at least one player won’t speak until a regional reporter asks him how he feels he did.

road game (n.) — For network announcers, nearly every game is a road game. In 1993, Marv Albert calculated that he spent 175 days a year traveling, totaling more than six years of his life thus far.

sideline reporter (n.) — A woman who’s expected to be as sophisticated about football in three minutes as the men in the booth are in three hours.

“Signed off the street … ” (exp.) — Announcers love to talk about a new player who “just last week” was selling used cars. Of course, it’s no surprise that a marginal athlete would take a temporary job between playing gigs. The surprise would be if he were signed off the Joint Chiefs of Staff.

When the sponsor writes your name
What he wants to hear
Is not who won or lost the game
But how you sold the beer.

sports radio (n.) — WFAN’s Craig Carton, 2013: “The more I get to talk about other people, the less I have to focus on myself. I therefore rarely take days off.”

spotter (n.) — A pair of eyes that allow an announcer to focus on his mouth.

story line (n.) — John Madden, 1988: “The idea is to recognize the storyline when it appears, not try to insist on what the storyline is supposed to be.”

tease (n.) — An ad for a game you’re already watching, and a process that elevates Sunday’s New England–Indy matchup to the last act of Götterdämmerung. Pat Summerall was the master of the tease.

Telestrator (n.) — The yellow squiggles that introduced Bill Walsh to America. In the ’80s, CBS called it “The Chalkboard.”

“This story has not been told before … ” (exp.) — When a documentarian makes a film about an unknown athlete, he expresses surprise that the rest of us are just as ignorant of the subject as he was. “I was just flabbergasted that his odyssey had not been told before.”

women (n.) — An executive once warned a young Linda Cohn: “Because you’re a woman, listeners will be waiting for you to make a mistake so they can dismiss you. They want to be able to say you don’t know anything about sports because you’re a woman. But if you’re accurate, no one can have anything on you.”

“Yes, sir!” (exp.) — What Verne Lundquist said when Jack Nicklaus birdied the 17th hole at the ’86 Masters. That it’s the most famous call of Lundquist’s career shows the aesthetic range of sports TV. A few minutes before Lundquist said “Yes, sir!” CBS’s Ben Wright used the exact same words to punctuate a Nicklaus eagle on the 15th. Golf Digest reported that Lundquist was “mortified” to learn of his inadvertent plagiarism. Of course, after calling Nicklaus’s birdie, Lundquist himself produced another “Yes, sir!” this time after a birdie putt from Greg Norman.

“You hate to see that … ” (exp.) — What an announcer says after a gruesome injury, as a cue to his producer to let us see it again.