Among the Hugs: A Visit to Wembley 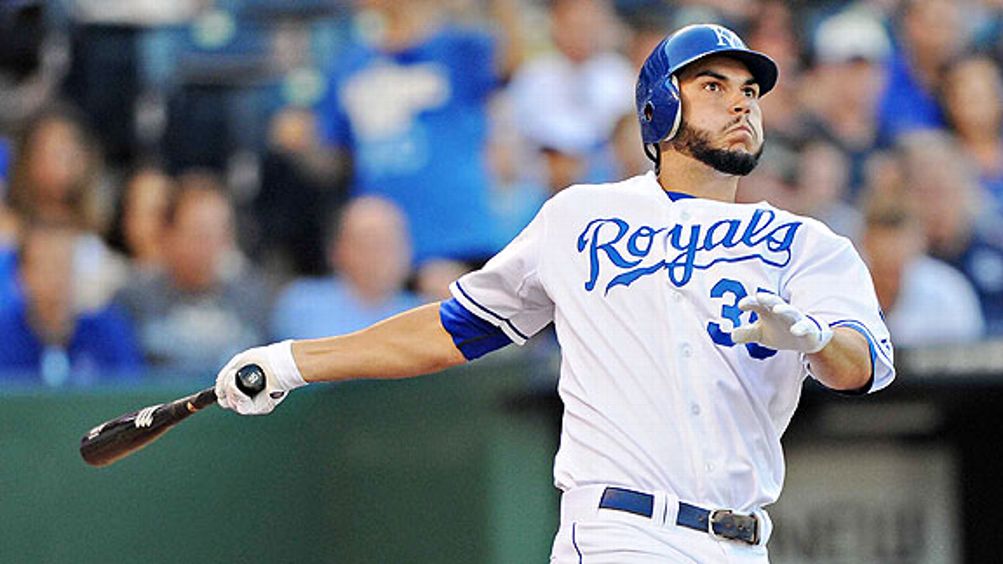 There aren’t a lot of benefits to being a Royals fan, but this is unquestionably one of them: No one will ever question your sincerity. If ever there was such a thing as a “bandwagon Royals fan,” a quarter-century of escalating irrelevance hounded it into extinction.

Royals fans don’t even have the luxury of a certain cachet that comes with rooting for a perennial loser. The Los Angeles Clippers are the performance artists of incompetence, and their fans are treated with a degree of awe. Fans of the Detroit Lions all got merit badges after surviving 2008’s perfect 0-16 season. The Pittsburgh Pirates are working on a streak of 18 consecutive losing seasons, a stretch unmatched in the history of American sport.

The Royals don’t have a hook. They haven’t lost spectacularly; they’ve simply lost consistently. Between the four major sports, 98 franchises have been around since at least 1986. Ninety-six of them have been to the postseason in that span. Not the Royals.

The only other franchise that hasn’t made the playoffs since then is the Washington Nationals, late of Montreal. Expos fans endured an exquisite form of torture that not even Royals fans can relate to, but at least they were put out of their misery after the 2004 season.

The Royals have come close to mounting a playoff threat just three times in the past 25 years, and they weren’t that close on any of them. In 1989, they were the third-best team in baseball with 92 wins, but Kansas City still finished seven games behind the Bash Brother A’s. In 1994, they were 64-51 and three games out of the wild-card spot when the strike ended the season. And in 2003, the Royals shocked everyone by winning 16 of their first 19 games. They led the division by seven games at the All-Star break. No one thought it would last, and it didn’t. They coughed up the lead by August and finished seven games back.

That constitutes the Royals’ entire list of near-misses. Even the Expos weren’t eliminated from the wild card until the next-to-last day of the 1996 season. Alone among professional sports teams, the Royals have not played a meaningful game — defining “meaningful” as a game with genuine playoff implications in the last week of the season — in a quarter-century.

So how did the Royals suddenly become trendy?

Dayton Moore, the General Manager of the Royals, has made his share of mistakes since taking the job five years ago. He signed Jose Guillen to a $36 million contract, because if there’s one thing a small-market team needs to spend its meager payroll on, it’s on an aging malcontent who can’t play defense and who got busted for steroids before the ink dried on his contract. Moore also thought Mike Jacobs was the answer at DH and wasted free-agent dollars on the likes of Willie Bloomquist and Kyle Farnsworth. He continues to employ Kyle Davies, who has the highest ERA in major league history of anyone with 120 career starts. He traded a carbon-based life form for Yuniesky Betancourt.

But Moore and his front office have done one thing well, and for a small-market team it’s the only thing that really matters: They’ve drafted the right guys and they’ve spent the money to sign them.

Before Moore, the Royals shied away from drafting big-name prospects who would be expensive to sign. That changed in 2007, when Moore convinced owner David Glass to open his checkbook for Mike Moustakas, the second overall pick. The next year, they drafted Eric Hosmer. Both were clients of Scott Boras, and the Royals spent $10 million combined to land the two. In 2010, they took a third Boras client, shortstop Christian Colon, with their first pick.

The Royals spent big money later in the draft on catcher Wil Myers ($2 million) and left-hander Chris Dwyer ($1.45 million). They outhustled every other team on a trio of left-handed pitchers, selecting Mike Montgomery in the supplemental first round, Danny Duffy in the third round, and John Lamb in the fifth round.

Last year everything started falling into place. Moustakas missed the first three weeks of the season with a muscle strain and still led the minors in home runs. Hosmer batted .338 with 72 extra-base hits. Myers, in his first full pro season, hit .315 with 14 homers and 85 walks. All four left-handed starters reached Double-A for the first time. Colon stepped off a college campus and hit a respectable .278 in high-A ball.

The official coronation of the Royals’ minor league operations came this spring, when Baseball America — the acknowledged arbiter of minor league greatness — unveiled its Top 100 Prospects list. All eight players above, along with pitcher Jake Odorizzi, were on the list. No team had ever landed nine players in the Top 100 before. Both Sports Illustrated and ESPN The Magazine ran features about the team’s farm system. The Royals were finally relevant again. Well, the Royals weren’t relevant, but the dream of what they could be was. They were the Dippin’ Dots of the major leagues — The Baseball Team Of The Future!

Forgive Royals fans for being a little hesitant to hop on their own bandwagon. The franchise hasn’t lacked for phenoms in the past. Colt Griffin threw 100 mph out of high school then struggled to break 90 two years later. First-rounder Dee Brown hit .331 with 25 homers and 30 steals in the minors in 1999, ranking among the best prospects in baseball. He finished his major league career with 14 homers and a .233 average.

Even the prospects who found immediate success in the majors also found ways to disappoint. Bob Hamelin beat out Manny Ramirez for the 1994 Rookie of the Year award. The next season he hit .168, and the Royals cut him a year later. Angel Berroa was Rookie of the Year in 2003, and within three years he was arguably the worst everyday player in the majors.

Then there was Alex Gordon, the biggest can’t-miss prospect in Royals history. Gordon was College Player of the Year in 2005 and Minor League Player of the Year in 2006. In his first at-bat on Opening Day 2007, he received the kind of reception generally reserved for the Pope. He struck out with the bases loaded. After four increasingly disappointing seasons, Gordon was written off by most fans as a bust. Only this year — his fifth season in the majors — has Gordon started to fulfill expectations.

The king of delayed gratification, though, was Zack Greinke, who was a phenom at age 20, lost 17 games at age 21, and walked away from baseball at age 22. The Royals built him back up slowly, first in the bullpen and then in the rotation, and the investment paid off in 2009, when Greinke won the Cy Young Award in his sixth major league season.

Royals fans know from experience that the road from top prospect to productive major leaguer is long and littered with failure. Like the old line about the forward pass, only three things can happen when you’ve got a prospect, and two of them — he gets hurt or he’s no good — are bad.

Last winter, around the same time as the Royals’ farm system was taking its victory lap, the team traded Greinke. He forced the trade, said he was sick of losing. “There’s no reason for me to get real excited about it,” Greinke said of the youth movement, “because the chance of more than one of them making a major impact by the time my contract is up is pretty slim.”

The words hurt because they were true.

A half-season into this new era of raised expectations, it’s tough to judge the team’s progress. The prospect horde arrived slightly ahead of schedule. Eric Hosmer hit an absurd .439 in Triple-A and debuted in the majors on May 6. Danny Duffy followed on May 18, and Moustakas on June 10. All three have looked like impact players in some games and like overmatched rookies in others. Aaron Crow, the team’s first-round pick in 2009, had an ERA close to six in the minors last year, but he made the team out of spring training as a reliever and his 1.40 ERA has been a revelation.

The heralded quartet of lefty pitchers, on the other hand, has mostly gone AWOL. While Duffy is in the majors, Mike Montgomery has an ERA well above five in Triple-A. John Lamb blew out his elbow last month and will spend the next year recovering from Tommy John surgery. Chris Dwyer needed a recent hot stretch in Double-A just to get his ERA under six. Meanwhile, the Royals’ outlook for 2012 is no different than it’s been for the past 20 years — they need more starting pitching.

As a Royals fan, I appreciate the attention they’re getting. But when you root for a perennial loser, what gets you through the day is the knowledge that when your team finally does win, the taste of victory will be even sweeter because no one will have seen it coming. That’s the downside of having The Best Farm System Ever — everyone sees the Royals coming, and it’s not even clear if they’re a mirage yet. It’s hard to shock the world when the MLB brain trust has pretty much conceded the AL Central to the team in 2013.

Meanwhile, the Royals are on pace to lose 94 games and they’re fighting to avoid the worst record in the American League. The future may be bright, but today, it’s business as usual.

Rany Jazayerli runs the Rany on the Royals website and co-hosts “The Baseball Show with Rany and Joe” podcast. He is one of the original founders of Baseball Prospectus, and works as a dermatologist in suburban Chicago.