A Mets-Oilers Misery-Off, Muscle Shirt Etiquette, and the Evil Lie Behind KitchenAid Mixers

In two weeks — hell, in two days — it’s not going to matter that, Wednesday night, La Salle and Boise State played a marvelously entertaining basketball game to close out what is known as the First Four — Trademark: NCAA Productions — in Dayton, Ohio, or that a morphed sliver of a guard named Tyrone Garland, who sports a headband around his braids and, if you look quickly, appears to be wearing a hat, threw a whole bunch of northwest Philadelphia at the Broncos, whose roster includes two Australians, a Serb, and a Latvian, beating them 80-71 in what appeared to be a glorified Saturday night in the old Sonny Hill League. (At one point, each team was playing with four guards.) And all those stories are not going to matter as we move inexorably toward the Final Four — Trademark: NCAA Productions — when all of what went on here is going to seem like it happened in a different time and place.

The logos will have taken over by then, and the trademarks, and the sleek pudgy guys in the track suits and the embarrassing bling around their necks, peddling tickets and Christ alone knows what else, the same guys you see at the Super Bowl or at any of our other modern sports spectaculars, where everything is a commodity. This brief midweek interlude at the start of March Madness is where the old NCAA tournament still struggles to survive beneath the corporate giantism that has descended on the sport.

Dayton has a strange and important place in the history of the tournament. More NCAA tournament games have been played in the University of Dayton’s arena — 91, before this year’s tournament — than anywhere else. It was at Dayton in 1975 that Kentucky beat undefeated Indiana, handing the Kent Benson–era Hoosiers the only loss they would suffer in two years. Magic Johnson began his tournament career here. It also was the location of one of the strangest postgame tantrums of all time. In 1981, a loaded DePaul team came here to play in a tournament it was supposed to win. It lost, 49-48, to St. Joseph’s on a last-second layup by John Smith. DePaul star Mark Aguirre was so distraught that he walked straight up the ramp and out of the arena, still in full uniform, all the way back to his team’s hotel, pausing only to throw the game ball, which he’d hijacked, in the parking lot.

This year, Dayton was given not only the First Four — Trademark: NCAA Productions — but a first- and second-round set this weekend as well. It is very much a throwback to the days before domes, when most of the tournament was played in campus arenas. (Of the nine venues that have hosted the most tournament games, the only dome on the list is the RCA Dome, in Indianapolis, which isn’t even there anymore, and none of them were built after 1977.) There’s a reason why the tournament keeps coming back here. When the NCAA concocted this gimmicky First Four — Trademark: NCAA Productions — business, Dayton leapt at the chance to be its semi-permanent host. (The opening games will be played here at least until 2015.) The city — a battered old small industrial town with a Schumpeter’s buffet of abandoned buildings downtown — treats the orphans of the bracket as though they were nothing but a collection of Shining Moments.

There are welcoming receptions and local media hype, and the arena is always filled. “I knew it was different,” said Austin Witter of North Carolina A&T, “because I looked up and there were darkened areas of the arena, and we don’t see much of that where we play, and I saw there were people sitting up there, too.”

The charming Babbittry that surrounds the games in Dayton every year does more than simply make the First Four — Trademark: NCAA Productions — seem like more than the participation ribbon that it looks like on Selection Sunday. It gives it a distinct place in the essential emotional infrastructure of the tournament. Every year, despite the best efforts of its organizers — and their corporate partners — to turn it into one coherent narrative, the tournament really breaks down into a month of competition made up of a series of individual weekend dramas. If you’re lucky, you get a clutch of close games, and a couple of ludicrous upsets, in the first weekend. If you’re lucky, you get one or two semi-ludicrous upsets in the second weekend, though you’re more likely to get tense games between good teams. And, generally, though there have been exceptions in recent years, the Final Four — Trademark: NCAA Productions — is contested by a quartet of the sport’s most successful financial concerns. The First Four — Trademark: NCAA Productions — functions as a kind of museum piece. Here in Dayton, it represents what the sport used to be, before the salesmen got a hold of it. Here in Dayton, it represents what the tournament is, before the big kids come out to play. This is where there are the first things. 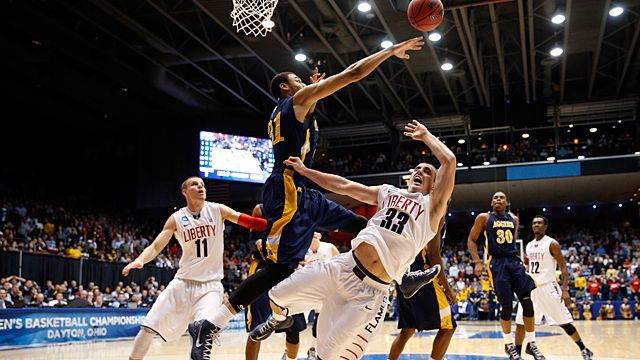 The first heartbreak of the tournament came at the end of the first game of the tournament on Tuesday, from a little guard named John Caleb Sanders, whose name sounds like it belongs to the hero of an ancient Appalachian murder ballad, and who looks like the kid who made change for you this morning at the diner. Sanders plays for Liberty University — the school founded by deceased theocrat Jerry Falwell at which students can be fined for watching R-rated movies — and, with seven seconds left on the clock, and his team down by a point against North Carolina A&T, Sanders juked at the right hashmark and went to his left hand. Head down, Sanders went into the lane. His teammate Davon Marshall was open on the left wing, but Sanders didn’t see him through the bodies and, very likely, through the haze of what he wanted to do. He took the ball right at the body of Austin Witter, the A&T kid who was so dazzled by the fans in the darkened portions of the arena. Witter played the move smartly, raising his arms straight up over his head, taking a small step backward, moving away from the contact Sanders was trying to create. Sanders got the contact he wanted, but not enough of it. Witter got a slice of the ball as it fell harmlessly away. The referee has not yet been born who makes that call at the end of a tournament game.

Sanders had kept Liberty in the game, as A&T, which previously hadn’t won a single tournament game in nine tries, and hadn’t even made the field in almost 20 years, played them even. At one point, the teams combined to hit nine straight shots. At the end, it was some dodgy A&T free throw shooting that enabled Sanders to make his run at the immortality of endless CBS replays. “We had a couple of situations during the year like that,” he said. “Back then, the coach told me to take the ball to the basket, and that’s what I did.”

“I believe I got a piece of it,” Witter said. “I think I did just enough to knock it off.”

Sanders tried mightily to be diplomatic, and he was approximately 80 percent successful. “I don’t know,” he said. “It’s hard to tell when you’re in the midst of a game. They didn’t call it, so it wasn’t a foul.”

On the other hand, the tournament’s first genuine star was Matthew Dellavedova, the 6-foot-4 Aussie who handles the ball for Saint Mary’s. He is a genuinely charismatic bloke, all rolling shoulders and torso, bouncing through the lane on offense like a ruck rover for the Sydney Swans, and caroming off picks on defense with an odd little cock of his head and what would look almost like a grin, if he weren’t wearing a Berlin Wall of a mouthguard that makes him look as though he is chewing concrete bubble gum. He and his fellow Gaels have spent their entire college careers colliding with Gonzaga out in that Tinkertoy conference of theirs, but on the opening night of the tournament, they were much tougher than Middle Tennessee, especially on defense, and Dellavedova was the personification of that. In addition to 22 points, he also had six rebounds, as many as anyone else in the game. He was forever swatting teammates on the head, smiling his obstructed-view smile at the referee, and generally being the beating heart of the whole proceedings.

It was, in fact, the first real tournament game of the tournament, played raggedly, and on the ragged edge of out of control, not played particularly well but at an extraordinary level of energy. And this despite the fact that Saint Mary’s cracked the game open in the first half, led by nine at the break, and was never seriously challenged again after the seven-minute mark of the second half, when Dellavedova drained a triple to give the Gaels a 10-point lead. Middle Tennessee only scored 12 points the rest of the way.

“When I was 16 or 17, that’s when I thought I wanted to play in this tournament,” Dellavedova said. “We didn’t see very much of it back home when I was younger, just the Final Four. Now, I have an idea of the size of it, the NCAA, and all the stuff that goes with it — the travel, and different parts of the country, and the open practices with people in the stands. It’s something that you want to go on and on, especially for the other guys in this room here.”

You could see the rest of the tournament starting to swallow up the First Four — Trademark: NCAA Productions — before Wednesday night’s doubleheader. Jim Nantz and Clark Kellogg showed up as CBS took over from TruTv, which presumably went back to autopsies and cannibal murderers of the evening. People in Ohio State and Indiana gear were waiting in line at the concession stands with fans of LIU-Brooklyn and James Madison and La Salle and Boise State, for whom these past few days are the whole tournament. In two weeks — hell, in two days — none of it will matter to anyone except to them. But that really ought to be enough.

The tournament is a long dramatic arc made up of a series of one- and two-act plays. The first one is over. The louder ones, with more flash and glitter and better casts and superior special effects, will follow. But the First Four — Trademark: NCAA Productions — is still the first of them, still playing in an old theater, where there are stories to tell, and memories of a basketball floating off into the atmosphere, because the player who threw it got handed an ending he didn’t expect.