Lessons from the Baseball Trade Deadline 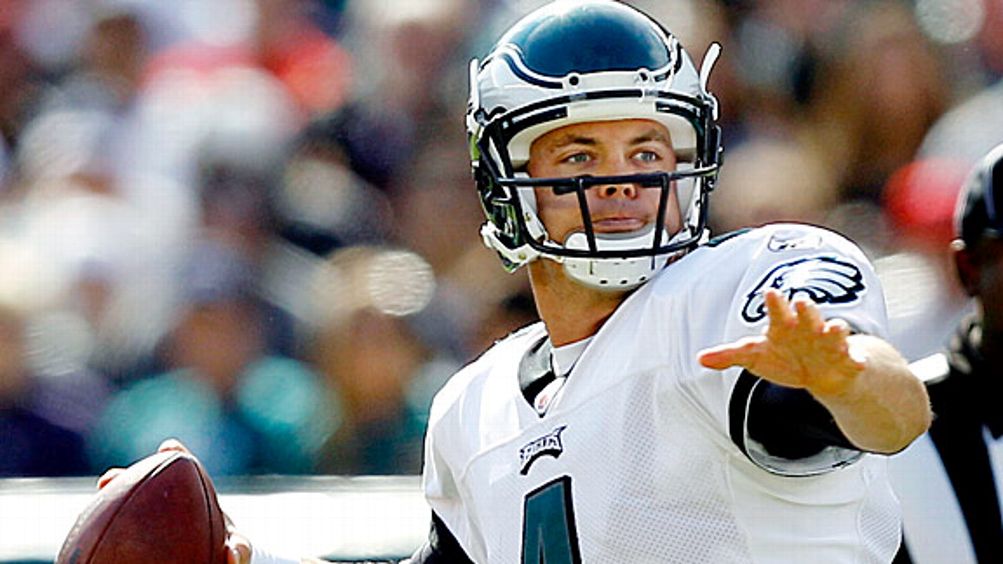 In a relatively quiet third day of free agency, NFL teams mostly held to form. In the biggest story of the day, the Patriots bought low on formerly elite retreads, a sign of how confident they are in their past few drafts. The Panthers continued to double down on themselves. The Texans shelled out big bucks to a cornerback at the top of the market, just like they were supposed to, and the Eagles finally pulled the trigger on the deal they had been linked to for months. Both teams upgraded at cornerback, but in doing so, signaled the end of their search for Nnamdi Asomugha.

Kevin Kolb, who immediately becomes one of the most compelling gambles made by any team over the past few seasons by virtue of the five-year, $63.5 million contract he signed with the Cardinals. Kolb is guaranteed $21.5 million after throwing just 310 passes as a pro.

There may not be a comparable deal for a player in any sport. Evan Longoria received a six-year contract seven days into his Major League Baseball career, but he was a 23-year-old player being signed at an under-market rate. Kolb is about to turn 27 and received a deal comparable to the ones signed by veterans like David Garrard ($18.5 million guaranteed) and Aaron Rodgers ($20 million guaranteed) in previous years.

Rodgers may end up being the closest comparable for Kolb, contractually. The Packers locked up him up in October of 2008 after just 280 career pass attempts. Unfortunately for Cardinals fans, the similarities really end there. Rodgers had already shown glimpses of the star he would be come, having completed 64.3 percent of his passes while averaging 7.1 yards per attempt and producing a touchdown-to-interception ratio of nearly 3:1. Kolb has completed a reasonable 60.8 percent of his throws, but he’s averaged just 6.3 yards per pass and has thrown more interceptions (14) than touchdown passes (11).

Barnwell discusses NFL trades (and his upcoming move to Las Vegas!) on the B.S. Report with Bill Simmons

It’s easy to find excuses for Kolb’s unimpressive raw numbers. Two of those interceptions came in a dismal performance against the Ravens in 2008 after Andy Reid shockingly benched Donovan McNabb at halftime. Three more came against the Saints in 2009, when Kolb still managed to throw for nearly 391 yards against what was then the league’s best pass defense. His disastrous debut in 2010 came against the Packers, who had the best pass defense in football last year. And his awful Week 17 start against the Cowboys was without LeSean McCoy, Jeremy Maclin, or DeSean Jackson, while rookie left tackle Austin Howard made his first NFL start by lining up against DeMarcus Ware, who promptly won the sack title. Of his three picks in that game, two were on Hail Mary attempts.

He only has two standout starts in his career, and while one was against the Falcons last year, the other was against an average Chiefs pass defense in a 2009 blowout. He tends to flail around at the first sign of any pressure around the pocket, the sign of a player who is not used to the speed of an NFL pass rush.

Great quarterbacks have a feel for the pressure and know where they can take a step to avoid defenders while maintaining their focus downfield, but Kolb tends to shuffle his feet and scramble out of the pocket, breaking his read progression in the process. His skittish nature in the face of a pass rush prevented the Eagles from getting guys downfield for Kolb to hit. Even when he had time, he seemed to prefer safer throws underneath.

While arm strength is often an overrated measure of a quarterback’s viability, Kolb’s is average at best. He struggled to make the deep throws the Eagles offense created last season, underthrowing Jeremy Maclin a number of times in the Week 7 loss to the Titans.

In reality, none of us really know what Kevin Kolb can be. Considering that the Cardinals identified Derek Anderson and Max Hall as viable options last year, it’s pretty clear they’re mostly in the dark, too. Rarely does a player have such a wide range of possible outcomes at this point of his career and with this much money invested in him, but Kolb could be an immediate Pro Bowler or an embarrassing, franchise-wrecking bust. We’ll know a lot more in one year.

When Betting on Yourself Goes Wrong

In February, Jason Babin noted confidently on Twitter that he was not interested in receiving the franchise tag from the Tennessee Titans. Had Babin been designated as such and signed his franchise tender, his compensation would have risen from $1 million in 2010 to more than $12 million in guaranteed money for the 2011 season. And if Babin had been able to reproduce anything resembling his 12.5-sack breakout season from 2010, he would have hit free agency in 2012 with that $12 million in his pocket and another big payday on the way.

Instead, Babin signed with the Eagles on Thursday, reuniting him with ex-Titans defensive line coach Jim Washburn. Babin received a five-year deal worth $28 million, but it’s an inflated figure that hides the true value of Babin’s guaranteed money: $6 million.

There’s no guarantee that the Titans, who ended up letting their franchise tag go unused this offseason, would have actually offered Babin such a huge one-year deal, but hindsight suggests that Babin should have been begging to be franchised.

This is why Junior Seau is Still Waiting by the Phone

It’s not really a surprise, per se, that the Patriots would buy low on a pair of players like Albert Haynesworth and Chad Ochocinco, but big names on the move will always raise eyebrows, especially when they land in Foxborough. Both players could fit into situational roles, there’s not much guaranteed money involved, and the cost to acquire them was low. And if all else fails, the Patriots will at least sell a lot of Ochocinco jerseys to a fan base that spent the summer debating between a fourth Brady jersey or a BenJarvus Green-Ellis authentic.

Haynesworth admittedly has limited merchandising potential, but he’s the more valuable of the two acquisitions. There’s a variety of reasons why he failed in Washington, but the two biggest factors were that he couldn’t stay healthy and the fact that he was playing out of position. He wasn’t healthy because he was out-of-shape. That is unlikely to continue for very long under Belichick. If the team doesn’t like what they see in camp, they’ll be able to cut Haynesworth without paying him a dime. When he’s in shape, Haynesworth can be a very effective interior pass rusher for 20-30 snaps a game on a team that had the league’s 19th-best sack rate in 2010.

While the Redskins wanted to play Haynesworth as the nose tackle in their 3-4 alignment, the Patriots will move him over to play defensive end. That should give him enough space to take advantage of his athleticism and shoot gaps to make plays in the backfield.

Ochocinco is a tougher sell. The terms of his new three-year deal with the Patriots are as yet unannounced, but it shouldn’t be for much more than the veteran’s minimum. He posted something close to a league-average DVOA last year (-0.5%), but his catch rate fell to just 53 percent, the lowest figure for Ochocinco since his first year as a starter. That’s a bad sign, as it usually means that a receiver is failing to create separation out of his cuts and/or struggling to scare defensive backs with the threat of a deep pattern. Ochocinco’s acquisition is no Randy Moss, but it’s also no Torry Holt. He should be an adequate spare part.

The Texans finally got their franchise cornerback, giving Bengals CB Johnathan Joseph a five-year deal worth nearly $49 million, with $23.5 million guaranteed. It’s an almost identical deal to the six-year, $57 million deal with $25.5 million in guaranteed money that the Texans passed on matching last year, allowing Dunta Robinson to move to the Falcons.

The deal takes the Texans out of the Nnamdi Asomugha sweepstakes, which means one of two things: Either the Texans didn’t think they had a shot at Asomugha, or the Texans thought that the Asomugha deal would take too long to negotiate and were afraid of ending up with no significant upgrade at cornerback.

The Eagles also took their hat out of the ring following the Kolb trade, as the Eagles picked up Dominique Rodgers-Cromartie to start across from Asante Samuel. It gives Philadelphia a pair of very similar corners — ball hawks with great athletic ability who know how to bait opposing quarterbacks into throwing to their side of the field. On the other hand, they have a problem in common: Neither DRC nor Samuel can tackle. Expect to see a few screens or quick hitches go 80 yards against the Eagles defense next year.

The acquisitions pretty much limit Asomugha’s possible landing points to strictly the Jets and 49ers, who are hoping to ride their presence in the Bay Area into the Berkeley-bred Asomugha’s heart. They’re a significant underdog in the race to the Jets at this point, even with their location, because the Jets give Asomugha his best shot at winning a Super Bowl. Although the 49ers play in the league’s weakest division, they’re light years away from competing for one.

Previously from Bill Barnwell:
NFL Team Needs
The 25 Least Valuable Players in the NFL
Free Agents You Meet in Hell