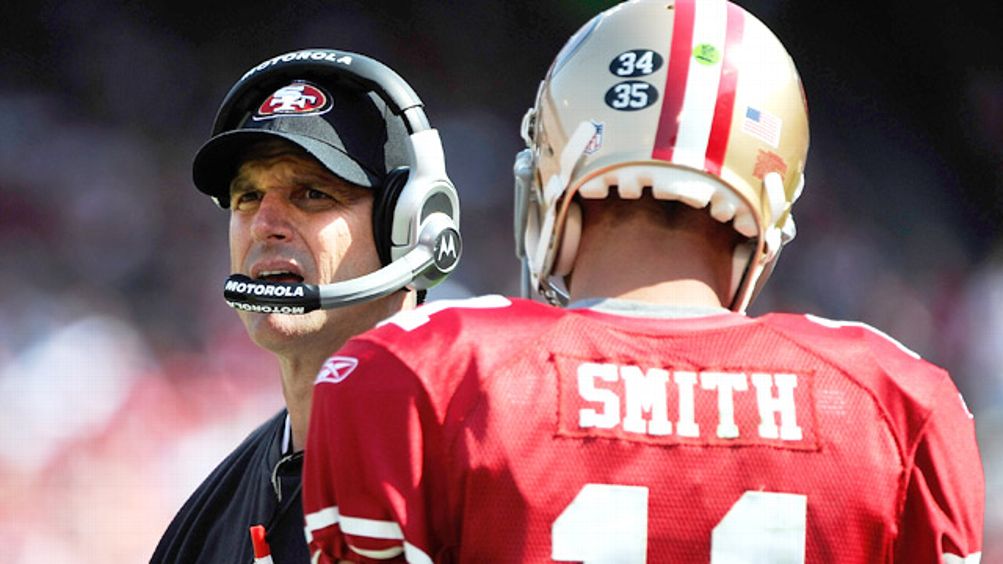 Something very curious is happening in Las Vegas.

With the NFL’s player movement period over and the relative composition of each team settled for the upcoming season, the assorted opinions of the betting public have begun to shape an extremely interesting futures market. Some of the movements behind traditionally popular teams like the Bears and Giants aren’t much of a surprise, but the action on last year’s unlikely contenders has headed in some unexpected directions. That action has led to the Patriots being toppled from their post as the favorites to win next year’s Super Bowl, with that honor now belonging to …

The San Francisco 49ers??? That’s correct: The Niners have gone from opening at 10/1, where they were tied as the fifth favorites alongside the Saints, to 4/1 favorites at the MGM family of sportsbooks to win Super Bowl XLVII. You know, the Niners with Alex Smith at quarterback who have just one winning season in the past nine years. Bettors, obviously, are looking past that to see a great coach, dominant defense and special teams, and a division that might contain as many as three cream puffs. Fair enough. On the other hand, Alex Smith is still their quarterback, you know? It just seems like that’s placing a lot of faith in the abilities of Randy Moss and Mario Manningham to push the offense into competency. We’ll get more into the Niners thing when our sprawling season preview begins next week.

It’s also worth noting that the Niners aren’t the favorites at every single book in Vegas. If you go to the Cantor-run books at the Palms or Tropicana, for example, San Francisco is at a more reasonable 10/1. If you’re planning on heading to Vegas and want to place a bet on the 49ers to win the Super Bowl, you’re getting significantly more value by betting at the Cantor books than you are at the MGM ones. And there are teams for whom the opposite is true, too.

Of course, there have been plenty of other notable movements on other teams, too. We can tell that you just want to get to the table and see what’s happened to your team, so go do that and then we’ll discuss some of the notable shifts on the other side.

One line move isn’t remotely surprising; the Broncos going from 75/1 to 7/1 naturally came as a result of the Peyton Manning signing. The other big leap forward, though, might be more of a surprise; the Chicago Bears have gone from 25/1 all the way down to 8/1, where they sit behind just three other teams. It’s not a surprise that the Bears would see action, since Vegas knows that the Bears are a perennially popular team and prices that into their line, but a move that pushes their odds ahead of teams like the Steelers and Eagles is pretty stunning. Of course, if the Bears team that dominated the Eagles, Lions, and Chargers in consecutive wins from last year is able to stay on the field for a full season, those 8/1 odds might look pretty good by January.

There’s another tier of teams seeing a decent amount of action, highlighted by the Cowboys, Jets, and Seahawks. The Cowboys and Jets also obviously have huge fan bases, but it’s still a surprise to see two teams that have taken so much flak over the past six months end up with steam behind them in July. The Seahawks’ move is fascinating because it shows how polarizing the Niners are as a team. It’s hard to imagine that a team with that much action behind it would also be in a division where a second team is simultaneously taking bets as a possible Super Bowl winner, but it looks like the bettors are either all in or all out on San Francisco.

The lonelier fate, of course, is to be a team with Super Bowl odds that nobody’s interested in. Nobody’s been subject to the same embarrassing situation as the Charlotte Bobcats, who didn’t take a single “will win the championship” bet this year at the LVH, but there are a few teams who are getting the cold shoulder from the public this offseason. Just as the Broncos saw their stock leap after acquiring Peyton Manning, the Colts fell fast after Manning left town. At 150/1, they’re now considered to be the least likely team in football to win a Super Bowl. It’s not surprising that the worst team in football from the previous season would end up with the highest odds to win the Super Bowl before the subsequent season, but the Colts have too easy of a division and have made too much of an upgrade at quarterback to fit at 150/1.

Another team from that division has also gone ignored this offseason, as the Titans and their impending quarterback battle have fallen to 80/1 from 30/1. Their schedule only differs by two games from Indianapolis’s, but sequencing matters. Have you taken a look at the Tennessee schedule yet? They start at home against the Patriots, head to San Diego, play the Lions at home, and then travel to Houston. What are the odds that they haven’t changed their starting quarterback by the end of that stretch? The Chargers and Steelers are the only other teams to see their odds more than double since the lines opened up for bets.

While we covered some of the early line movements on NFL team over-unders back in May, there have been a number of notable shifts amid the totals that MGM originally put up two months ago. Interestingly enough, those don’t always jibe with the movements taking place with regard to Super Bowl odds.

Another three have seen their total decline by a half-win, which would indicate heavy under action. Despite the improvement in their Super Bowl odds, the Cowboys have come down from a bet of under 9 wins at -110 to under 8.5 wins at +115. The Falcons have gone from under 10 wins at -120 to under 9.5 wins at -130, and the Bengals are down from under 8.5 wins at -120 to eight wins at the same figure. This doesn’t guarantee anything, of course; remember that the Bengals’ win total dropped by a full two wins down to 5.5 before last season, and they went over their win total on every ticket.

And we finish this week with the lines that have been posted for some notable NCAA teams and their respective over/under totals for the upcoming season. Keep in mind that the lines in question do not include wins in conference championship or bowl games, so the teams in question will have to hit these win totals before those games to make their over bets.