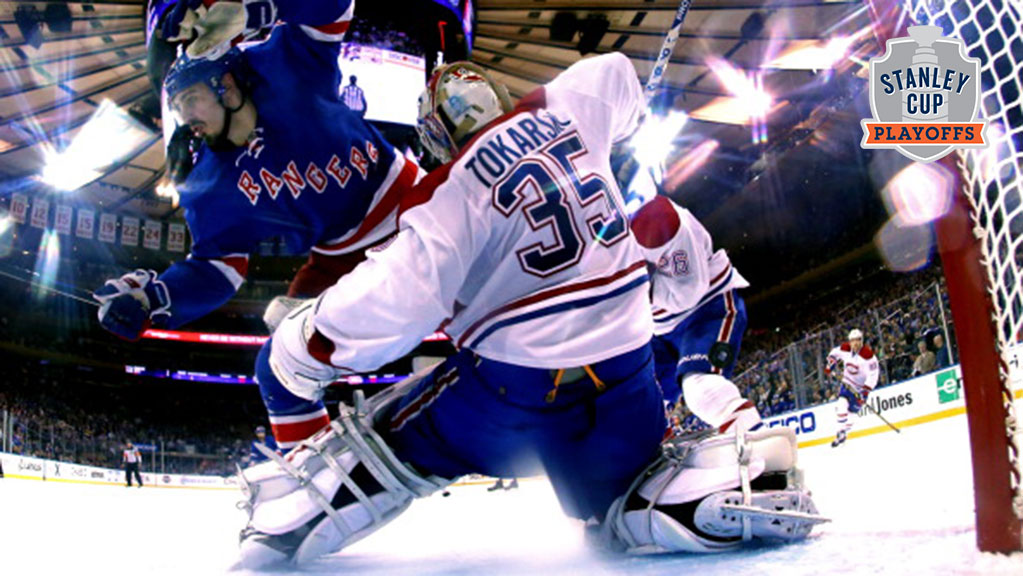 Dustin Tokarski stood atop a tiny pedestal late on Thursday night, his back pressed up against the concrete Madison Square Garden wall. You could have said the same thing, really, about his entire team earlier that day. The Montreal Canadiens’ emotional, vengeful second-round victory over the Boston Bruins in seven games had earned them respect and added a new chapter to their immensely proud history, but their bonne chance seemed to have run dry.

Not only did the Habs lose the first two games of the Eastern Conference final at home by a combined score of 10-3, their ace goaltender Carey Price was declared out for the remainder of the series just prior to Game 2. And so before Thursday’s contest had even started, New York talk radio was already ruminating on the dangers of a potential 10-day layoff following a sweep. It was a giddy bubble just waiting to be burst, and Tokarsi turned out to be the guy in possession of the needle.

If someone had sought out Tokarski just last week and promised him that he’d soon be making 35 saves in a playoff game at Madison Square Garden, “I’d think they had a little too much to drink or something,” he admitted with a slow, sly grin. Buried in the team’s depth chart — in the Boston series, he didn’t even dress as a backup — Tokarski was something of a surprise selection by coach Michel Therrien. (It was reminiscent in many ways of Bruce Boudreau in Anaheim rolling the dice on John Gibson.)

But it was also a canny call. “We understand that with the loss of Carey Price we put the young kid in a tough spot,” Therrien said prior to Thursday’s game. “But you look at his background, and he’s a winner, and that was the number-one priority for us.”

In 2008, a then-19-year-old Tokarski was named the best goaltender and tournament MVP in the Memorial Cup playoffs, which his team, the Spokane Chiefs, won. The following year, he was in net when Team Canada won the World Junior Championship. In 2012, he backstopped the AHL’s Norfolk Admirals (coached by Tampa Bay’s Jon Cooper) to a Calder Cup trophy. And on Thursday night, he left his teammates with little choice but to win the game.

“We all knew amongst ourselves that we owed him,” said Daniel Briere, whose goal with three minutes to play in regulation was the 53rd postseason score of his career. “For the way he kept us [in], some of the big saves he made, especially in the first period … we felt like we owed him one.”

Defenseman P.K. Subban, who was one of Tokarski’s teammates on the 2009 WJC squad, echoed this. “He made some huge saves where, ya know, we’re kinda looking at each other like  — Guys, we’ve gotta wake up, he’s giving us an opportunity here and we’ve gotta back him up.”

Of the five goals scored by the two teams on Thursday, the final three deflected in awkwardly off players’ bodies. The Rangers nursed a 1-0 lead after Carl Hagelin batted a rebound out of the air and into the net, but a few minutes into the second period a wide-open Andrei Markov converted a laser pass by Max Pacioretty to tie the game. The Canadiens took a 2-1 edge with three minutes left when the puck caromed off a sliding Ryan McDonagh’s leg and past Henrik Lundqvist; Briere was credited with the goal.

It seemed as though the score would stick — especially when Tokarski absolutely robbed Martin St. Louis with a glove save with less than a minute to play — but the Rangers got a lucky bounce when a Chris Kreider deflection hit Montreal’s Alexei Emelin’s skate and trickled across the goal line to tie the game with 28.6 seconds left. The Rangers fans in the building celebrated so heartily that the press box, located on a “bridge” suspended from the Madison Square Garden ceiling, shook beneath us as if there’d been a seismic event.This quivering setup was all part of the sparkling $1 billion MSG renovation that concluded before this season, displaced the Rangers for weeks, and made the Garden, save for its ceiling, almost wholly unrecognizable. Gone were the teal and magenta seats; in their place was a uniform swath of near-black navy blue. The dirty concourses and bland food were updated and upgraded, the bridge section and fancy new suites and lounges were installed, and somehow in the midst of all this everyone totally forgot — judging by the press box bathroom situation — that sportswriters can be both men and women. One important feature of Madison Square Garden, however, remained exactly the same. As far as I can tell, the place has an unwritten policy that each and every visiting athlete must be asked, or preferably badgered, about how lucky they are to be setting foot on such hallowed ground. Describe the MSG mystique, they’re told. You must have dreamed of playing here as a kid. Some players have genuine ties to the arena: Pacioretty, who grew up in Connecticut, spoke at length before Game 3 about his memories of the Mark Messier Game 6 guarantee, which turns 20 years old on Sunday. (The best nugget from the conversation: When Pacioretty’s father found out his son would play his first NHL preseason game on a line alongside former Ranger Alexei Kovalev, he hung up the phone and immediately drove six hours to Montreal.)

Still, when it comes to most of Pacioretty’s teammates, it’s sorta silly to hear guys whose home ice is the much-revered Bell Centre having to act as though they’re somehow cowed by MSG. To their credit, everyone — no doubt having gone through this before — always knows the right answer. “Well, it’s the world’s most famous arena,” Montreal’s Alex Galchenyuk said quietly and simply on Thursday morning before the game.

Fast-forward about 12 hours and the fans, only half of them having bothered to put on the “UNITED IN BLUE” T-shirts that were draped across each seat, had been rendered stunned and silent. Less than two minutes into overtime, the 20-year-old Galchenyuk netted the game-winning goal. No one could immediately process this turn of events, least of all the second-year player whom teammates have nicknamed Chucky.

“To be honest, I have no idea what happened,” he said. “[Tomas] Plekanec put it on net and it bounced off my stick or hit me.” It appeared to have deflected in off his face — maybe not the usual modus operandi for a sniper like Galchenyuk, but definitely one that seemed of a piece with the character of this particular game.

“The fun thing about our team,” Subban said, “is that every night, it seems like it’s a new hero. That’s what you need to do in the playoffs, different guys stepping up. I think sometimes people forget about the depth that we have.”

For every hero in the postseason there’s typically a villain, and the first one of Game 3 was former Ranger and current Canadien Brandon Prust. You could debate whether his hit on Derek Stepan in the first period was a head shot, but it did appear to be late. Prust wasn’t penalized, and as a woozy and incensed Stepan was taken off the ice, he couldn’t stop screaming in his former teammate’s direction. On Friday, coach Alain Vigneault announced that Stepan’s jaw was broken and would require surgery.

Broken jaw notwithstanding, Stepan would actually later return to the game, but not before his team had taken the bait: a retaliatory scuffle between Derek Dorsett and Prust lured in Dan Carcillo like moth to flame, and the mercurial Rangers enforcer tried to wrestle off a restraining official — with his stick — and was promptly ejected from the ice. (According to TSN’s Derren Dreger, it’s possible that Carcillo could be handed a 10- or 20-game suspension for what went down — laying hands on a cop, after all.)

Going into Game 2 up 1-0 in the series, the Rangers had finally managed to do something that had eluded them 13 straight times: win while also holding a series lead. (Their 0-13 record when ahead in a playoff series was an NHL record.) They were confident and on a roll, having ticked off three straight wins to beat the Pittsburgh Penguins before going up 2-0 on Montreal. “Right now it’s more about what they’re doing than what we’re not,” said the Canadiens’ Dale Wiese on Thursday morning.

But in Game 3, the story turned spoiler, all about the breakout game for a rookie goalie. (This being the Montreal Canadiens, of course it was all just a part of a longstanding, glorious tradition.) As the frenzied crowd of reporters surrounding Tokarski began to dissipate, the questions grew more personal, everyone wanting a small slice of life.

What was his favorite team growing up? The Oilers, probably, he said after some thought, since they were the closest team to where he grew up in Saskatchewan. What did his parents do? For a long time, they had a farm. Had he helped out on the farm himself? As much as he could, he said, then thought about it more and admitted that no, he hadn’t really, because he was always so busy with his sports. What was the coolest thing about the whirlwind of the last few days? He wasn’t sure, but joked that he sure had picked up a lot of new Twitter followers.

As Tokarski spoke, Canadiens general manager Marc Bergevin, clad in a supremely tailored ankle-length suit the approximate color of Crayola’s burnt umber, lingered a few yards away. He shifted his weight from foot to foot, unable to keep still, eyes like laser beams on his goalie. Finally, the questions stopped, Tokarski stepped down, and Bergevin spoke.

He nodded his head sideways in the direction of an office; a command, not an invitation. If you didn’t know any better, you’d wonder if Tokarski were in trouble — “Uh-oh, Dustin, the boss is calling!” someone quipped. Tokarski joined Bergevin and the two walked onward and turned the corner. You could say the same thing, really, about their entire team that night.